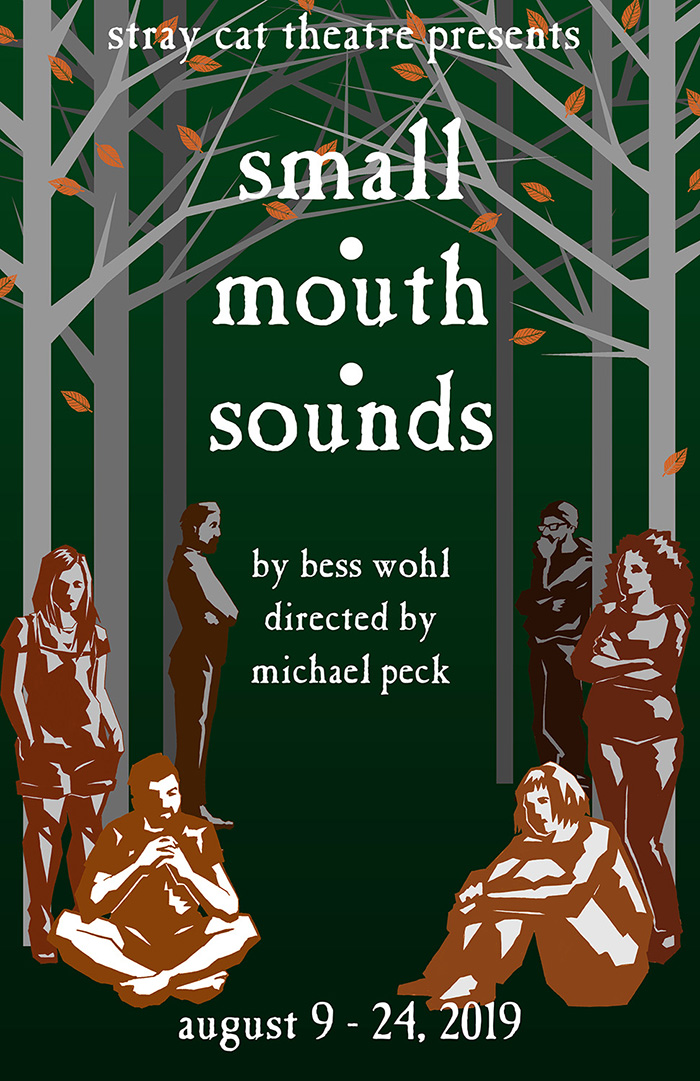 Six individuals suffering through varying degrees of life’s most difficult tribulations are at a silent retreat, seeking amelioration. Words amongst each other are limited, with most of the dialogue spoken at them by the teacher as they wordlessly sit on stage. They build bonds through actions, rather than dialogue. And let the audience in on some, but not all, of their secrets and struggles. With the exception of Ned (played by Louis Farber), whose monologue framed as a long-winded question is one of the most impactful scenes of the show, we know very little about the characters. Only enough to let us know that they each have a profound motivation for seeking inner peace: illness, loss, addiction, resentment, rage.

The retreater’s performances are all potent and astute. In a medium where words are so often the lifeblood of the story, the silent portrayals prove that the majority of communication is nonverbal. That body language is the most predominant component of language.

Alex Kass is Rodney, a new age yoga guru who exists within a facade. Kass proficiently conveys the superficial exterior, concealing the hideousness within. Brianne Massa plays Alicia, the lovely young woman who is lost and searching. For what we are not entirely sure, and we do not need to. Massa has a dynamic and complex presence, allowing Alicia to swing between self-confidence and near-collapse. Jan is played by Jesse James Camps. Jan is pleasant and distant, building friendships with ease without ever fully letting us in. An amusing reveal at the end makes it abundantly clear how little we actually know about him.

Katie McFazden (Joan) and Jodie Weiss (Judy) are on the retreat as a couple. McFazden and Weiss have chemistry and compassion, as their characters navigate a situation that would challenge even the strongest of bonds. And Farber’s portrayal of Ned, the show’s most complex and sympathetic character, is both tragic and humorous. Farber finds many moments to alleviate tension and evoke much needed laughter.

The set is lovely and muted, befitting of a quiet locale tucked somewhere in the wilderness. However, the choice to have the retreater’s tents partitioned in front of the elevated stage on the theatre floor was a double edged sword. While it allowed for seamless transitions from day to night, it also moved much of the storylines out of view, causing a domino effect from the second row back. Audience members were forced to bob and weave to try to see between those in front of them. About 80 minutes into the show, when I almost smashed heads with the stranger sitting next to me, I resided to give up trying. Since so much of the show is nonverbal, a great deal of the story was lost in the obstruction.

Perhaps it is the intention, but much is left unknown as the story comes to a close. There is a slight purge at the end as we see glimpses of potential new beginnings. But it is unclear if the teacher’s extremely odd lessons have made the intended impact. For such a powerful concept accompanied by such successful performances, the conclusion is somewhat unfulfilling, as everyone departs without being sure if the retreat is really over.

Small Mouth Sounds is a potent reminder that thoughts and actions are amplified in silence and stillness. Like how booming our own heartbeat sounds in a sensory deprivation tank. Or how plentiful and bright stars are when we find ourselves in one of those far off places where light pollution no longer shrouds us from the glorious vastness of space. It is a reminder that sometimes clarity can only be found when stimuli is stripped away and we are forced to reside in awareness.

Small Mouth Sounds is playing at the Tempe Center for the Arts, in the Studio Theatre, through August 24th. Tickets are $30 and can be purchased online.