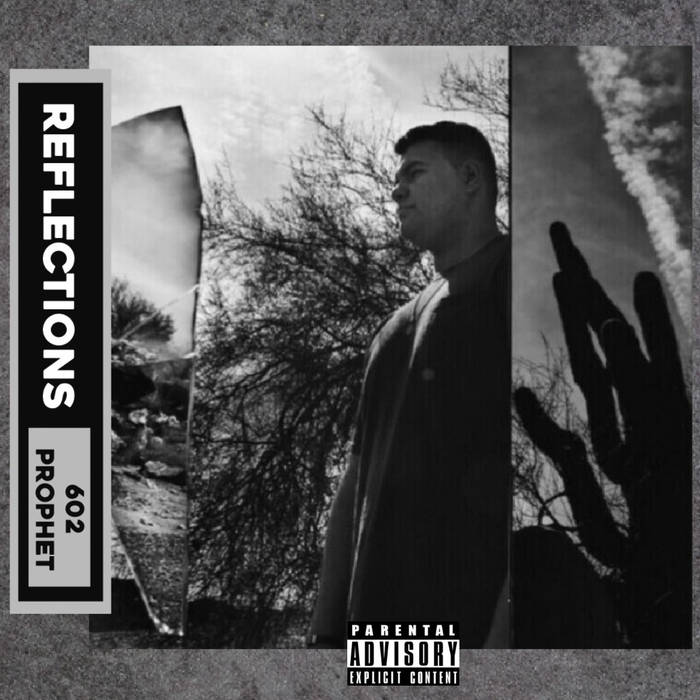 [602] Prophet – the 18 year old, South Phoenix rapper – first caught my attention when I discovered he had secured a scholarship to Loyola University in New Orleans for Urban Music Production.

Now, I didn’t even know that such a degree program existed, but I think it’s pretty amazing and my curiosity was piqued to check out his latest full length release, Reflections. While I was slightly dubious as to the album title (can someone at just 18 years of age truly have thought provoking reflections on life?), I was quickly reminded just how talented the youth of this planet/country/state/city can be and found myself head-bobbing throughout the entire record.

Reflections has a completely classic, underground/backpack sound to it. Vibes and jazz samples, Rhodes piano and deep bass. What’s new however is the style and delivery of [602] Prophet along with the myriad of guests that appear on the album as well. It makes Reflections feel very current, and in hip hop, that often seems to matter the most. I mean no one wants to bump stale, old shit that’s supposed to be new.

“Tell Me” opens the album and sets an appropriately pensive tone for what’s to follow on Reflections. And, while the sax throughout “Petrified” gets me groovin’ every time I hear it, the probing lyrical push of the song gets me to reflect on my own life and the situations I’ve found myself in: “Feeling so petrified/ feeling so terrified / thinking that I’m buried alive.”

However, I’d be hard-pressed to say that Reflections is bleeding-edge hiphop, pushing the genre into new, unexplored territory. It’s simply a collection of solid songs that I thoroughly enjoy and they show a promising start for this young artist. [602] Prophet has a completely laid back style, almost to the point of monotone in his delivery, and I feel that with a little more time his actual voice will catch up with his mind and powerfully deliver every sick line he concocts.

I wanted to find out more about  this Phoenix emcee on the rise and his LP, Reflections, so I sent him some questions and he was gracious enough to answer them. Since the spring release of Reflections, he has also released a couple of Summer singles which can be found on Spotify.

But, first, take a moment to check out my interview with [602] Prophet to find out the inner workings of Reflections as well as what’s upcoming for the artist as he makes his way from Arizona to Louisiana…

Mark Anderson: How long have you been MC’ing? Are you a native Phoenician?

[602] Prophet: I’ve been MC’ing for almost 2 years now in the local scene but I’ve been writing raps since I was about 13 years old and I was born in Tempe and raised in South Phoenix my whole life.

I love the low-key, jazzy production on this album. Who produced/engineered Reflections? Or did you work with multiple producers?

I worked with many producers for the album (Sunny, B. Young, Profound, Origami, Donato, Gambi, Dran Fresh, NK Music, John Savage, Yusei, and GHXST) the whole album was mixed/mastered/engineered by Respect The Underground’s very own Bag of Tricks Cat.

How did you hook up with all the guests that appear on the album? Did you contact them or did they contact you? Maybe some of both? They’re all fantastic.

I reached out to all the artist either through DM on Instagram or Email a few of the artists were locals that I just greatly appreciated in the scene like Shrub Head, T R U V O N N E, and Pseudocentric and then there were the bigger independent artist like Mark Battles, Kelechi, and Breana Marin who I knew were perfect for the project.

I think it’s incredibly awesome that you got a scholarship to Loyola University in NOLA to study Urban and Electronic Music Production. Could you tell us a little about this program and how you found out about it?

I found out about Loyola through a college fair I went to at the Phoenix Convention Center and just stayed in contact the program teaches about the music industry, music production, audio engineering, etc.

And with that said, are you going to continue to release hip hop and rep New Orleans now? (At least for 4 years haha)

I will definitely keep dropping music as consistently as I possibly can depending on my college schedule. I plan on repping AZ in New Orleans but I’m also excited to embrace the city for the few years. I visited the city in the fall and was blown away at the level of talent I saw on my short visit so I’m looking forward to the journey.

I think it’s badass that artist Antoinette Cauley asked you to be a part of the soundtrack for her latest exhibition, “Ain’t Nobody Prayin’ For Me“. Could you tell us how this collab came to be?

Me and Antoinette go back. She used to teach this Boys & Girls Club class on Hip Hop that I was a student of and we kept in contact and she supports my art just as much as I do for her. When she broke down the meaning behind her exhibit and asked me to be a part of the sound track it was incredible.  “Ain’t Nobody Prayin’ For Me” is about growing up too fast and learning how to overcome obstacles that’s a similar message I was trying to convey throughout “REFLECTIONS” and my song “Highs and Lows” came out to be a good fit for her sound track.

What’s next for [602] Prophet (besides school obv)? Any final shows in AZ before you take off?

I plan on dropping a collab project with my homie Miles aka ShadowFax called “Southside Saiyans 2” we only need a few more tracks and then we will release it in August along with a house party release show. I’m working on a mini-doc with Angel of Music Production about me, some music videos, and some surprise singles here and there so be on the look out

Anything about you or Reflections that you would want our audience to know that I didn’t ask?

Reflections is me as a person: it’s what my mental mindstate was like over the last 2 years. I basically wrote this whole project as like a diary/journal and recorded it like a therapy session. I’ve been through a lot and after “reflecting” on my past I became a better person by becoming more patient and that’s what I’m trying to teach the listeners hoping it’ll help others. It’s open to interpretation though so to other people the meaning might vary.