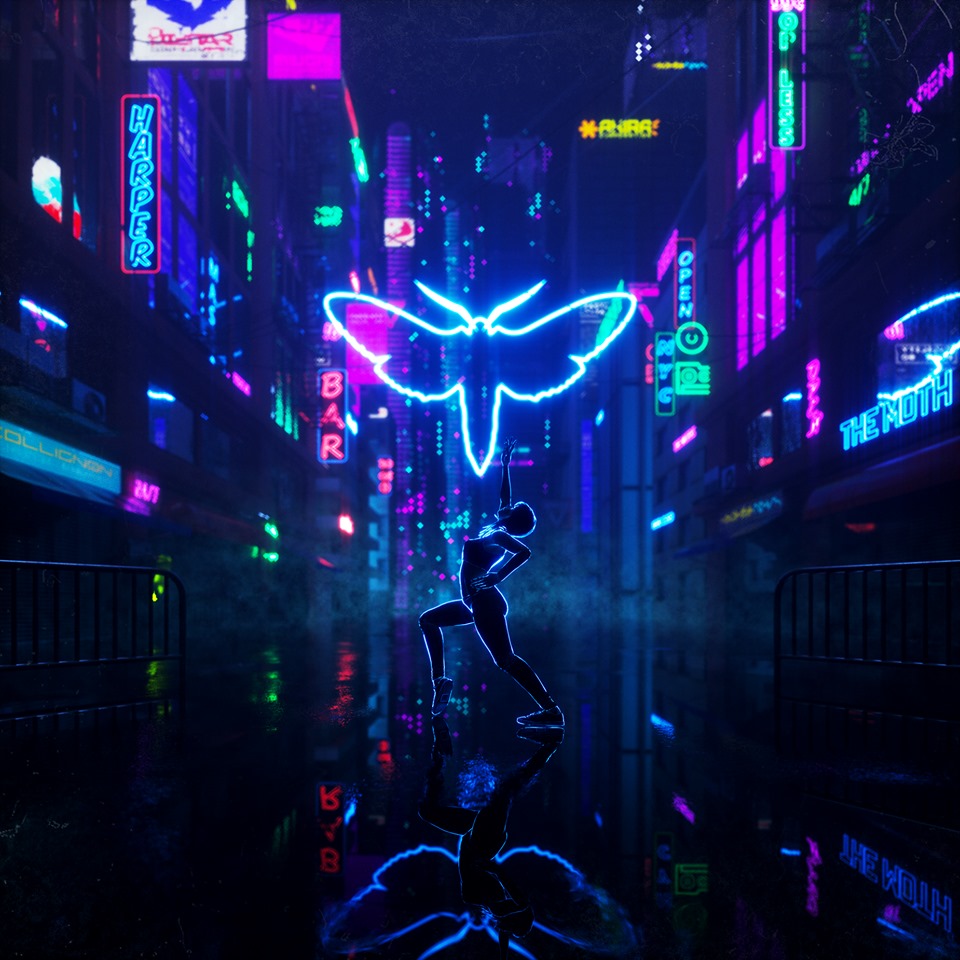 I have to say, I’m a Harper and the Moths convert. It’s true. It took one or two tries before I finally gave into the New Wave-inspired Nu Disco sounds of Phoenix’s favorite band to dance to. And what led to this great transition to fandom? Dark Enough to Dance, the new album from the PHX 4-piece, combines infectious energy with an electrifying alt-pop sound for something that feels nostalgic and fresh all at the same time.

From the album’s emotive intro all the way through ten full tracks to the matched closer, Harper and the Moths delivers driving synth sounds and super catchy melodies that will have you bebopping around wherever you happen to be listening. Be it your car, your office, or a dark, sweaty music venue here in town where the band’s live show is known to whip people into flurried motion.

I had a chance to chat with Harper Lines of Harper and the Moths fame about the album, songwriting, reviving that 80s aesthetic, and what’s next for this fan favorite.

Carly Schorman: First of all, I love love love the new album. I feel like the band’s really coalesced on Dark Enough to Dance better than ever before. Has the lineup for Harper and the Moths changed over the years? Or is this the same quartet we heard before?

Harper Lines: Thank you! Harper and the Moths went through a lineup change in the end of 2017, when our former guitarist (Chan Schulman) and keyboardist (Kelsey Xastle) left to pursue other opportunities in and out of the music scene. That left myself, Etti Bowen, and David Campbell to finish working on the soundscape of the new record. We were fortunate enough to have known Salah through School of Rock, where both he and Etti were teaching at the time. Salah also plays in local bands Brother Theresa and Audrey Heartburn. The standard quartet is now Harper Lines (Vocals), Salah Moharram (guitar), David Campbell (Bass), Etti Bowen (Drums and keyboard).

The New Wave feel on this album is still very strong and I feel it’s one of the defining aspects of the band’s aesthetic, but I would argue that this album has a very futuristic feel as well. Did you set out with a revisionist history goal in mind: to make new New Wave? Or was the vision different in scope?

OMG yes. You nailed it on the head. We knew we needed to reinvent ourselves on this album while still playing to our strengths. So much of our sound is a synth, new wave, rock and roll vibe, sprinkled with new disco – so we kept a lot of those ideas consistent in our writing process – but embraced working with more modern synth and drum tones and production cues to set this record apart as something fresh. The idea was to create a very dark pop record with driving rhythm and undeniable hooks, which is why we have a lot of reoccurring musical and vocal melody themes throughout. We wanted it to feel like an experience, not just a record of singles.

Where did you record Dark Enough to Dance? Any special appearances from unofficial-Moths?

We recorded all of the instrumentation and backup singers at Premier Studios in Phoenix. The lead vocals were recorded in Big Bear, CA with ESCQ producing and mixing. We also worked with Tatiana Crespo and Vanessa Mendez for backup vocals on the record, as well as Danny Torgerson and Chris Hoskins from Captain Squeegee on horns on a few tracks. We try to switch up the live lineup but always incorporate horns and backup singers.

What is the songwriting process for Harper and the Moths?

Honestly, it’s a beautiful process when everyone writes. We’re fortunate in the Moths to have multi-instrumental songwriters who all contribute ideas. Generally speaking, someone will come with an idea they’ve already recorded and we’ll workshop it. I’ll throw together a vocal melody and lyric sketch of it and we’ll demo it out until it makes sense. I tend to write a melody before the lyrics – it’s much easier for me to vibe off the energy of the song and come up with a melody which compliments it, then through that melody subconscious lyrics will emerge. I’m not in the practice of writing lyrics first.

What’s your set-up like? For the synth-gear-heads out there….

For this record we embraced backing tracks for the synth. I used to play keys when the band first started and before we had Kelsey, but for performances it makes more visual sense (and with the addition of two backup singers and a horn player), and is so much easier to squeeze 7 people on stage. We entertained (and are still thinking about) having me jump on keys for half of the set, but I also really like the freedom of being free on stage. Who knows? Maybe we’ll get a key player or I might end up playing in the near future. We used to HATE the idea of backing tracks… but who cares? We wrote and recorded those parts and basically everyone uses tracks now.

Is the band’s “itch for another time” just an aesthetic thing? Or are you ready to bring back the 80s in full force? Is there anything specifically you’d want to bring back (uh, besides the music)?

HAHAHAHAHA. I think more than anything it’s our love and appreciation for the romantic, new wave sounds of the 80’s. Fashion is surely cyclical, so i’m happy to see overalls, crop tops, board shorts, and the 80’s skate/surfer/goth vibe coming back full force. I enjoyed the unapologetic expression of the decade whether through blaring synths and lazer light shows or big hair and bright fashion.

If we’re being totally honest here, it seems like Harper and the Moths is one of those bands that people either love or love to hate. But I think this new album is going to see most of that latter group switching teams… at least, the people who are honest with themselves and others. How do you feel about being grouped into “guilty pleasure” music? Do you feel that’s accurate or am I way off?

I don’t know if anyone HATES us, but we definitely don’t sound like any bands in AZ. We’re not a rock band, we’re not post-punk, we’re not disco or funk… we’re a little bit of everything in all the right ways. I’m sure that confuses other bands and local scenesters who are just into one thing. I think when we released Rock.Pop.Soul and got a lot of buzz, it was easy for people to dismiss us so they equated it to us being “pop” or “disco” or a schtick. Now, with the release of Dark Enough To Dance, we’re proving that it isn’t a fluke, and that we write great songs and work our asses off to make you feel the love when we perform live.

I love our catalog and we have a pretty diverse soundscape, but I think this record is undeniable and we’re very proud of it.

Love and heartache are resounding themes throughout Dark Enough to Dance. Is that just a consequence of being human or did you maybe have a troublesome muse to help inspire some of the album’s more brooding numbers?

I’ve discovered that the most relatable art comes from moments of honest conflict. This album was certainly inspired by events in my personal life.

At one point Etti was like, “Dude, I’ve been listening to these lyrics a lot… are you okay?” I’m okay. LOL. I don’t really hold back when it comes to expression through art because what’s the point? I may not feel the way I did a year or more ago anymore, but I was honest when I wrote those words down and I’ve received a lot of messages from people who relate to those words.

So yes, it is just a consequence of being human and I did have a muse to derive inspiration.

So, as the senior editor here forevs, I remember when Harper and the Moths fell victim to our short-lived YabYuck series for an earlier release. That series was one of my few, but not only, regrets over our tenure in local music. And, since that time, the band has really thrived and grown in tremendous ways musically speaking. How did receiving a hyper critical review impact you at that time? And what advice would you give to new artists facing critical assault?

That review was strange because it came out of nowhere and the critic didn’t really explain what they didn’t like about the band. Their premise was something like “This band writes formulaic pop songs that aren’t pop songs”. I think they compared us to conveyor-belt pie? IDK. The analogy didn’t make a ton of sense. I think the critic just wanted to say they didn’t like that we were getting popular and they didn’t like our sound but couldn’t really articulate why. I was glad that someone wrote something critical of the group because critique is important. We definitely laughed about it and still joke about it. My favorite part was that they never critiqued our bass player, everyone loves that guy.

I’d be lying if i said I didn’t take it personally because creative endeavors are very personal… but we got off pretty easy compared to other groups.

I definitely accepted their challenge though – I remember commenting on the post and the writer said something like “don’t write boring stuff and I won’t say it’s boring”. I’ll always take that to heart. Any writer/creative/musician can get stuck working in their own toolhouse and if that isn’t ever challenged you’ll never grow.

My advice to other groups facing criticism – Be honest with yourself and criticism won’t sting if you have appropriate confidence in your final product. At the same time – this person might have an agenda and some people just like to drink Haterade. Fuck em. Sometimes those who can’t like to make those who can feel bad.

It seems like people don’t dance at shows nearly enough. What are you feelings on public displays of dancing? Will you get down at a show when no one else is? Or do you reserve your dance numbers for non-public places?

People do not dance at shows nearly enough and it bothers me. I always sway around at the very least when I’m seeing a live performance and I’ll straight up get down if there’s a great rhythm section. I think people are generally shy of public expression because it makes them feel vulnerable, judged, and uncomfortable [but] I dance throughout our entire set because I can’t help it, but it finally felt like a non-stop, sweaty dance party at our record release show.

What’s next for Harper and the Moths? Basking in the glow of your recent release? Or are you going to get right back to songwriting? Maybe music videos? Tours? More local shows to get people dancing?

We’re performing a few times in August and plan on shooting our next music video in August/September for a September release. Planning on doing a handful of regional tours and taking this show on the road around the new year. Anything to get people dancing!