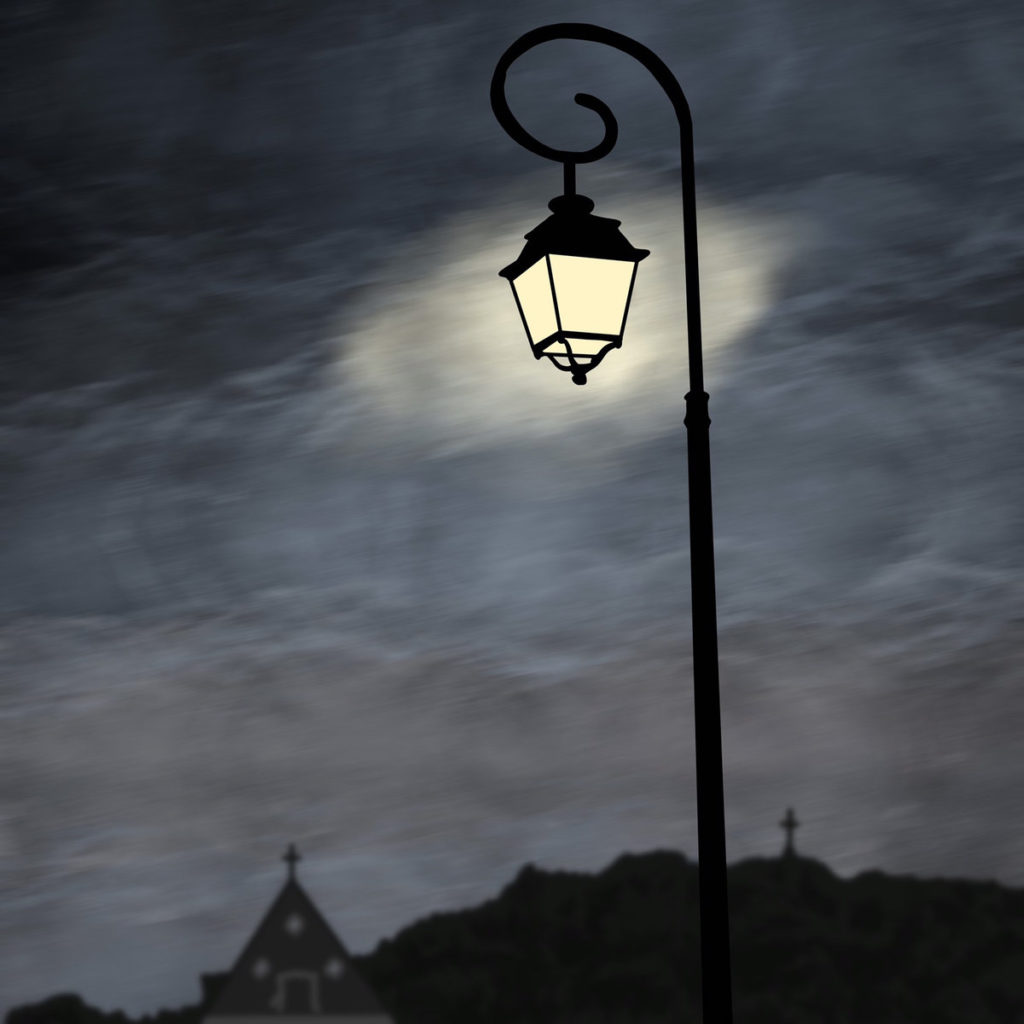 As my local contemporaries and I age along with our careers, I get a nice, warm feeling (not too far off from indigestion) when I’m able to review someone who I would call a friend. Although some might look to a music review for critical guidance, I see an opportunity like this to give the readership insight to the man behind the curtain. And today’s Wizard of Oz is the one and only Matthew Slusser. In addition to being an insane film-buff, Matt always considered himself a musician, and for as long as I knew him, played the bass guitar.

“I was in a few bands growing up. A metalcore band in ’08, and a pop rock band in 2011, but nothing really stuck until Phantom Party started in 2015, which is where my true footing within the Phoenix Music Scene took place,” said Matthew Slusser of the podcast, Getting Stoked, and the new music project, A Night Without Monsters.

“[Phantom Party is] a project I’ll always be grateful for, as it afforded me great opportunities I have today. We started in 2015 and disbanded in 2018.”

Slusser took time to focus on his other creative endeavors, like his podcast. But, in the last few weeks, he took a break from his Getting Stoked throne to get back into music, creating his first full-length solo-album under the name, A Night Without Monsters. Can’t you mentally picture the logo on a Hot Topic shirt? You won’t be disappointed. While the album contains new writing conventions spawned by mixed genres, this album reflects on the Matt’s massive metal love. While I sense some nods to metalcore, Matt dug into the sound he wanted and ended up with:

“The genre for this record is definitely hard to pin down,” Slusser pointed out.  “The final sound is definitely far from what my initial direction was. Going into writing this album, I wanted to make a depressive suicidal black metal record.”

“[Depressive Suicide Black Metal] is the extreme metal sub genre I fell into that inspired this entire project, which is why the first songs I wrote for it,  ‘Holding On and Screaming’ and ‘The Storm,’ are the heaviest,” Matt continued.

“One minute it’s blackened hardcore, the next it’s an acoustic/rock ballad; I just call it post-metal because I feel it’s vague enough to encompass most of what’s in the record.”

Titled We’ll Never Get Out of the Woods, Matt intended this album to be something “he needed to get off his chest,” a personal one-off record with a purpose. His explanation reminded me of our shared love of Ricky Gervais, the comedian who never produces a show longer than two seasons. On the music end, maybe you don’t need to release five albums to tell one story that can be told in five tracks.

Matt screams throughout this brief foray into his mind, beginning with the track “The Storm,” which is ironically calm before the party gets started. A flurry of guitars surround the past notes as Matt screams lyrics relevant to saving someone who was already a lost cause in the first place, as it ends with a clause comparing a past love to a terminally ill patient being kept alive for others, against their will:

Slightly surprised by this drastic change of style and sound, I asked Matt about the process of creating an album which contrasts his older material so greatly.

“At first it was fucking terrifying, but I feel like the people who know me or have followed me over the past year won’t be too surprised,” he asserted. “The lean into extreme metal genres has been one that I’ve been falling into pretty drastically and, like everything else in my life, I haven’t exactly been quiet about it.”

In the second track, Matt uses a lesser-known noun describing waste or debris, to get the message out. Upon reading the lyrics of “Detritus,” this album is a closer look into the mental demons of the songwriter. The second track delves into a four-minute first-person story of trying to wake someone from an apparent overdose, with Matt as the main character, frantically trying to wake the subject, ending on an obscure, sober note: “Ambulances show up much faster than the police.”

The random societal reference makes complete sense with the lyrical situation. The third track was claimed to be Matt’s favorite, titled “Holding On and Screaming;” At this point, I also questioned Matt on the songs which didn’t show up on the album, but he confirmed there were only two songs which didn’t leave the lyrical stage.

“It’s the first song we recorded and it was the first time I ever did lead vocals on anything, ever,” said Matt. “For better or for worse, it gave me the confidence to keep going.”

Clocking in at only a minute and nine seconds, sadness transfers to emotions of madness as his lyrics become more violent. “Holding On and Screaming” uses abstract language and analogy to relate the pain he felt, but doesn’t completely address the subject like the aforementioned tracks did. While the subject of the first two tracks described his pain toward someone else, “Holding On and Screaming” is complete self-reflection:

On a brighter note, the conversation moved into the contributions of Matt’s best friend, roomie, and local musician, Sam Etling of Sore Eyes, who contributed horn/aux arrangements, some guitar, and drum programming; the writing and recording was chiefly up to Matt. 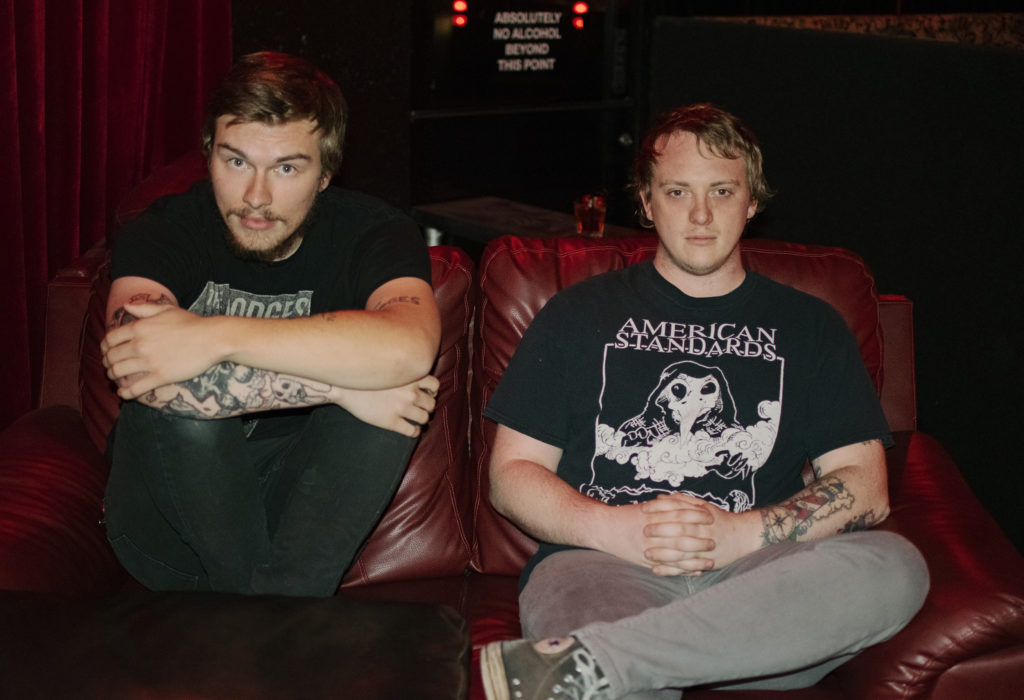 “The writing process for this album consisted of me staying up late at night and demoing all the songs as I wrote them onto my laptop with really bad logic plugins,” said Matt. “Then, the following day I would go into Sam’s bedroom and record the song for real with his nice amps, studio mics and expensive guitars. Thanks, Sam!”

The narrative returns to second-person in “Palinopsia,” a word which describes the sensation of experiencing the remainder of an image after the stimuli is removed. The album notes claimed it was written in one night, recorded in another, and deals with the subject of paranoia associated with a traumatic event.

The track begins with a riff somewhat resembling the genetic experiment of R.E.M. and Stevie Nicks. Comparably softer than the last three tracks, Slusser utilizes a minute of calm jams before the track launches into a catchier rendition, resembling a chase scene in a movie more than metal. The instrumentals get incredibly dark and doomed after the four minute mark when the originally intended genre kicks into gear with the low growls provided by Matt. I would consider “Palinopsia” the outlier on the album and a potential single, with its catchy riffs surrounding the brooding vocals, and a great way to segue into the last, title track.

In a strange turn of events, the last song features actual sung vocals by Matt, not muddled by other bandmates on lead this time. With a folksy sound, Matt harkens back to his childhood in the lyrics while the vocals of Matt and Sam blend in a pop-folk sequence, complete with screams which kept to the theme of the album.

Matt is my friend, and it’s clear there is a personal connection to my review of this album. What I originally thought was going to be a collection of average Arizona metal turned into a psychological evaluation of an enigmatic individual in the Phoenix music scene. Similar to a musical autobiography, Matthew Slusser managed to cram his past demons and the music which influenced his career up to the present day with references to blues, folk, and pop-punk among the layers of black metal.

I go into most local albums understanding it might not be my cup of tea, but attempting to view it through the lens of a fan. Straddled among the polarizing genres and disturbing lyrics is the culmination of mental health which led up to its creation. As I listened, I felt the pain the songwriter had to sort out in order to create this piece of work. And, while it’s not a perfect album, it is incredibly and emotionally raw. I don’t think I’ve ever seen such a dark sadness in Matt Slusser, but hell, I get it.

With no touring plans and a penchant for the unexpected, Matt considers A Night Without Monsters a possible one-time project, unless fans say otherwise.

“This album is the result of needing to get something off my chest and move on,” confirmed Matt. “If I have another story to tell or feel the need to create something within the medium of music, I would make another album, [but] as of right now, I’m just going to see where this one goes.

“If it completely flops and no one gives a shit, I’ll probably just keep any future music to myself and keep the podcast as my main focus, [but] if by some miracle, people are into this album, maybe I’ll make more. Who knows?”