What is jazz? And what makes it good?

These are questions I feel the best jazz musicians in the business ask themselves constantly while pushing a medium that exists on the bleeding edge of music. Of course, all answers to the question are entirely objective, but I feel that if you get it, you get it. And Purple Spectre certainly get it.

Purple Spectre formed only recently in the last couple, but they’ve already dropped their first EP, Spirit Realm, in 2018 and the band is now set n’ ready to release their self-titled, full-length debut next week!

Lead by composer and saxophonist, Mike Moynihan, and joined by Kai Felix on drums, Max Goldschmid on trumpet and French horn, Patrick Morris on electric bass, and Angelo Versace on keyboard, Purple Spectre certainly know their stuff — and they got the chops to prove it. But creating compelling jazz is more than knowing your seventh position scale and when to modulate a full step while playing in 5/8 time. It takes soul and feel and working with your fellow musicians to create an entire composition. And that’s what Purple Spectre does.

The album opens with “Mafdet Part Deux” or, as the band calls it, “Part two of our tribute to the Egyptian Goddess of legal justice.” And yes, there is a part one. This one has a different groove though, and I can see why Purple Spectre starts with a part two. After a fat rhythm intro by Angelo, the gang lays down a heavy horn line that hooks at its first, Phrygian bite. The track then travels into cool jazz territory for a spell before returning to its original groove before branching out again. And this is just the first song!

“Spectral Synthesis” follows next on Purple Spectre for what the band describes as “a synthesis of the entire musical spectrum”. At nearly eight minutes, there certainly is a lot of ground covered in this song, including an extended bass solo. While some might cringe at that last statement, I remain intrigued throughout the entire composition, never feeling like the sound grew stale or redundant.

This is a good point to state that Purple Spectre are not making future jazz. Besides the wiring built into the electric bass, and the effects that come standard with keyboards these days, there are no pedals or electronics, no samples nor pads heard here. They create a new jazz sound that feels modern without any of the special FX or newfangled bells and whistles of modern electronic instrumentation.

The rest of Purple Spectre traverses considerable sonic terrain in the remaining 10 tracks. From breaking it way down on “Life is a Sin”, the band picks it back up with the original “Mafdet” and then a little more with another track from their first EP, “Chin Juice”. Purple Spectre, the band, then breaks it down even further with a full-on ballad on the track, “Sara”. Anyone interested in jazz should dive into this album. Hell, even if you hate jazz you should listen to it. Purple Spectre just might change your mind.

To learn more about the impending release, I took my questions to Mike Moynihan of Purple Spectre. Read on to find out more about the making of Purple Spectre as well as Mike’s songwriting process and what’s coming next for the band. And, if you like what you hear, make plans to head to The Screening Room on July 12 to catch the band live and pick up your copy of their new album.

Mark Anderson: You seem pretty prolific from what I’ve been able to ascertain online. How long have you been composing music?

Mike Moynihan: I began experimenting with composition when I was around 15 or 16. I remember that my first attempts as a composer did not turn out well! I really didn’t understand harmony and how chord progressions worked, but I always felt strongly that I wanted to be a composer, and I was determined to push through that awkward beginning stage. I was no Mozart, for sure! Not a natural at all. I simply kept writing one tune after another, trying to catch inspiration when it came. To me, the hardest part about composing was translating the sounds that I was hearing in my head onto an instrument such as the piano. I’m actually very slow when I compose, and it can take me hours to “transcribe” a few bars of music that I am hearing in my head.

How long has Purple Spectre been around and how did you hook up with these cats?

Purple Spectre formed in the Fall of 2017 under the name MWM Group. I knew exactly who I wanted to play with in the band. I had a vision for the type of sound I wanted and I knew that Angelo, Max, Kai, and Patrick would be the perfect fit for what I was going for. All of these guys were already friends of mine from the music scene in Tucson, and I was just lucky that they were willing to collaborate on this new project! Eventually, I wanted us to have a name, more like a rock band, so I took inspiration from a spiritual “past life” vision I once had about being a lonely purple ghost on a forgotten planet. Hence the name!

While I enjoy your 3 track EP Spirit Realm in composition and tone, I feel the new album is that much better. Where did you record it? Who engineered it and about how long did it take you to make?

We recorded Purple Spectre in three days at the Jeff Haskell Recording Studio at The University of Arizona in the Fall of 2018. Wiley Ross did an amazing job engineering, mixing, and mastering the session. We performed every take “live,” with no overdubs. It was a challenge to execute some of the technical passages of the compositions while giving satisfactory improvised performances, but we were committed to the spirit of jazz, choosing spontaneity, emotion, and group interaction over technical perfection.

How about your songwriting process. Do compositions come fairly easy to you and you just present them to the band and then BAM!, new sweet jam? Or is there a rigorous mental and physical plane you must cross to create these songs?

Composing is a strange process in that sometimes nothing seems to work, but then other times an entire piece can just flow out in one sitting. Most of these songs seemed to pour out of me all at once! I even wrote the song “Chin Juice” while I was noodling in the sound booth at recording session for another band that I’m in called Street Blues Family. I was amazed that I remembered the whole tune in its entirety long enough to write it down and add the accompanying parts the next day.

I was very inspired by the new direction I was going with this band in terms of the tunes being more groove oriented. My first record was in more of a straight-ahead style, so my creativity was fueled by thinking about the grooves in addition to the melodies and harmonies. I’m lucky that all my band members are excellent at reading music, so it was not difficult for them to interpret the charts that I presented to them.

What was the hardest part of recording the new album? How about the simplest?

Honestly, the hardest part about this project so far has been scheduling and booking performance opportunities. We performed all of the songs on the album several times in public before recording them. It was important to me to do this because I wanted everyone to feel comfortable and familiar with the material before hitting the studio. I always look at Miles Davis’s great bands as example because they would tour for months, playing the material for an album extensively before they recorded it.

I’m always amazed at how difficult it is to book shows in Tucson, especially for an improvisational instrumental band like us. It’s a labor of love, but it has been more than worth it so far!

What kind of saxophone(s) do you play? It seems as though you play flute, clarinet, piano, and guitar as well and even offer lessons in these instruments. As a composer can you play even more instruments than this?? I totally see the bass as something else you can play… probably drums too!

I play all the saxophones, especially alto, tenor, and soprano, but I mainly focus on the tenor sax. I have been dabbling in drum set and hand percussion, but so far I have yet to acquire a bass. That is next on my list!

Please tell us about the release show! Anyone playing with you guys? Will you be playing the album in its entirety??

The CD release party will be held at The Screening Room on Congress on July 12 at 7 PM. We are the only band on the bill. I have a new multi-movement suite that I recently completed called Monomyth. We are still developing the the music, but if we get it to a certain point by the show, we may be premiering it at the album release! So stay tuned!

What’s on the horizon for Purple Spectre? More shows and songs in the works?

As I mentioned, I have the new piece Monomyth in the works, which is a twelve song cycle paralleling The Hero’s Journey. Also, I’ve always been very interested in songwriting as well as instrumental composition, so I have plans to add the amazing vocalist Erin Anderson to the band soon. I have yet to write anything for that configuration, but I’m hoping by the fall we may start playing some shows with Erin! 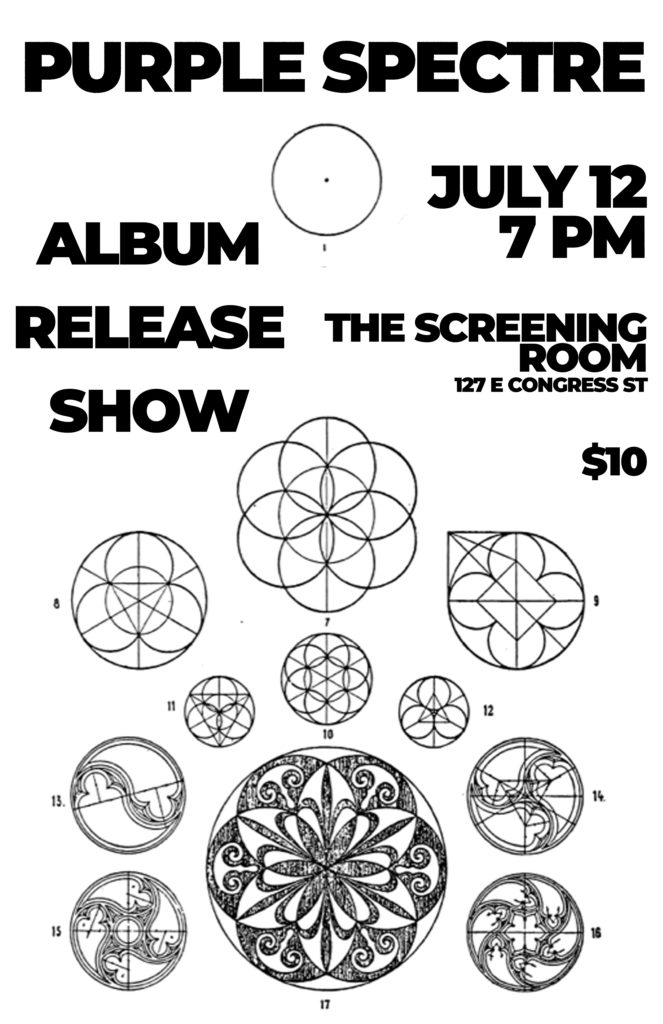