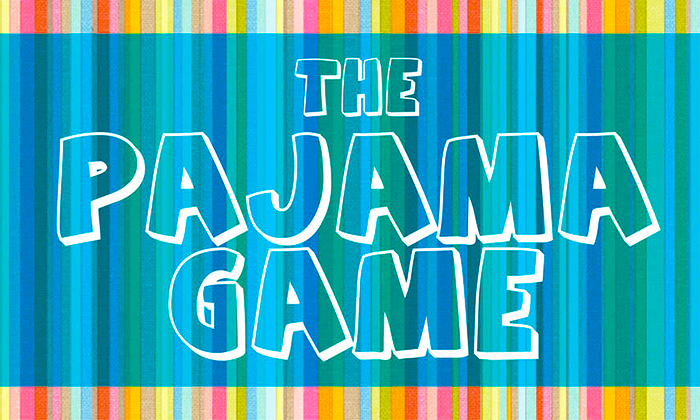 The Pajama Game is a musical straight out of the Golden Age of Broadway. Based on the novel “7 ½ Cents” by Richard Bissell, it premiered in 1954 and subsequently won the Tony Award for Best Musical. Set in and around a pajama factory whose workers are in a union dispute, demanding a seven and a half cent raise to bring them into alignment with the rest of the industry’s pay standards. The factory’s new superintendent (Sid) falls hard for the leader of the union’s Grievance Committee (Babe), and their love story in the midst of the factory’s tumult drives the story forward.

The show as a whole is somewhat clunky. Perhaps outdated, or perhaps it has always been so. Don’t get me wrong. I am not downplaying the success of this production, but rather commenting on the source material. There are storylines that make perfect sense, performed by fully-developed characters through enjoyable numbers. But there are also pieces, some of which are oddly amusing, that do nothing to drive the story forward or serve the trajectory of the show. “Steam Heat” at the start of Act II is an example. Although some may consider it iconic, and it was beautifully performed in this production, it is completely superfluous. There are several other moments in the show that disrupt the pace. As a viewer who likes every scene to progress the story in some way, I occasionally found it a bit jarring. 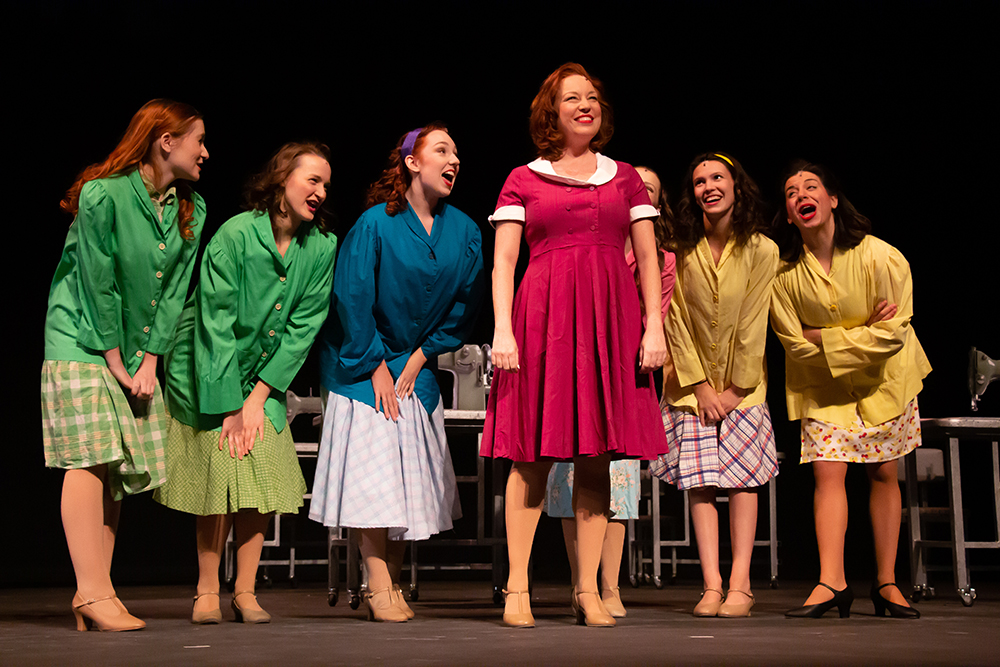 All that said, Scottsdale Musical Theatre Company’s (SMTC) new production of this classic is quite well done. The backdrops, which often comprise the majority of the production space, are painted and utilized brilliantly. The knife-throwing scene has a bit of stagecraft magic, and the factory floor lined with sewing machines is cleverly laid out. The lighting design gives off a feel of old Hollywood, using a mixture of powerful overhead floods and tight spotlighting. And the costumes are peppy and colorful, albeit simple, helping to define and drive home the time period in which the show is set.

There were also some really superb performances. Kate Maniuszko is intoxicating as Gladys. With the movement of a classically trained dancer and an overpowering stage presence. She glides through the show with grace and polish. Her counterpart Hines is played by Hector Coris, who sets the tone of the show from the very beginning with a silliness and whimsy that he somehow maintains throughout, even as he descends into murderous madness. His “I’ll Never Be Jealous Again” performance is one of the show’s brightest highlights. The relationship between Gladys and Hines was as dynamic as it was perplexing, and that is a tremendous compliment to the actors in this context. 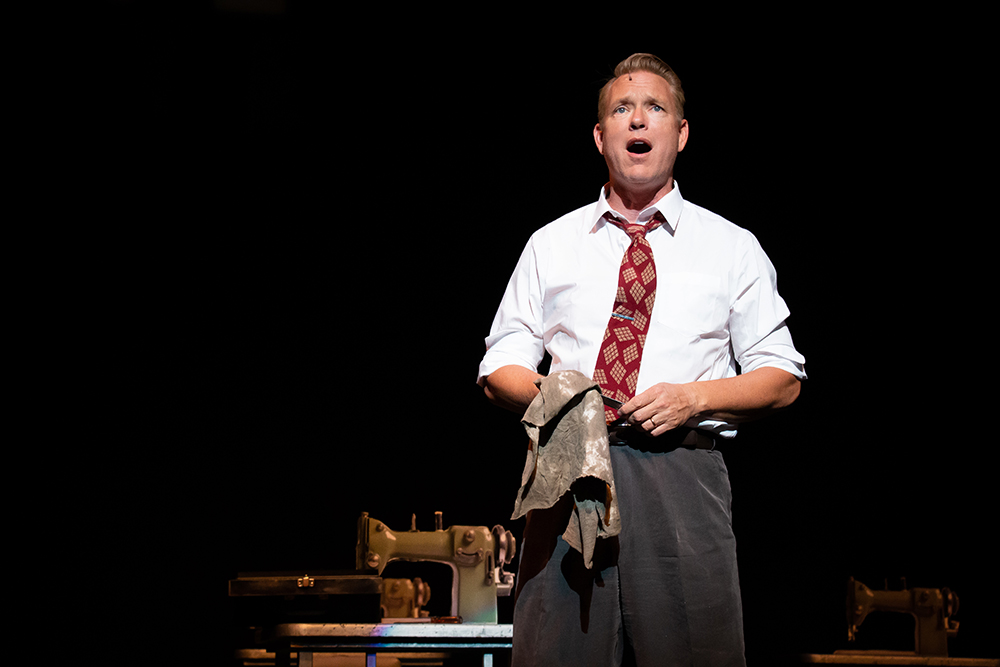 Elizabeth Blair is captivating as Babe. She evolves substantially during the performance, becoming ever more engaging as her walls come down. Blair’s voice is powerful and unwavering, and it carries through the space as if on wings. And Cory McCloskey, our local FOX 10 weatherman who went viral when his map technology failed, is guest starring as Sid. McCloskey has swag from his first step on stage. Confident and charismatic, demonstrating his prowess as superintendent from scene one. While he does not have the most powerful or trained singing voice, McCloskey delivers an effective and enjoyable performance.

The ensemble also delivers some standout large numbers, such as the “Racing With The Clock” which is synchronized perfectly, both physically and vocally. The all-cast number “Once a Year Day” is another number that hits all the right notes and is a pleasure to experience.

SMTC presents “affordable large-scale productions of famous Broadway musicals in their entire original versions.” It is a goal I hold very close to my heart, as theatre becomes more and more of a commodity only available to the wealthy few. Live theatre is a communal, enriching, visceral purge that feeds the soul and brings people together. And any organization that creates theatre and seeks to find ways to make it available to all, is one we are fortunate to have in our community.

The Pajama Game is playing at the gorgeous Tempe Center for the Arts through Sunday, July 21. Tickets are $42-$58 and can be purchased online from the SMTC website. Ticket bundles can also be purchased for multiple shows, including the upcoming Man of la Mancha and A Christmas Carol. 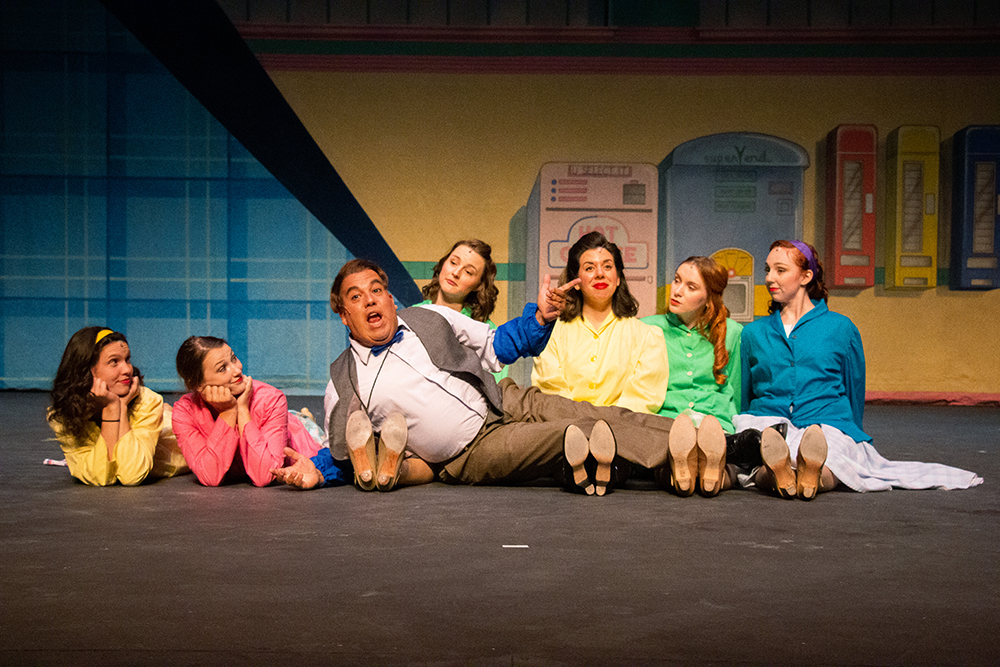 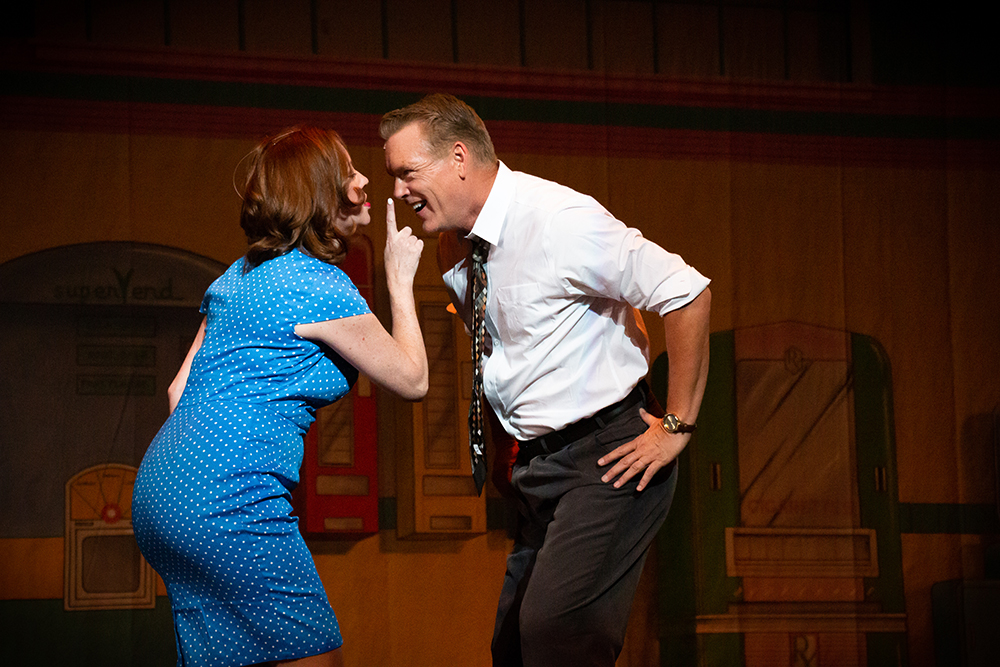