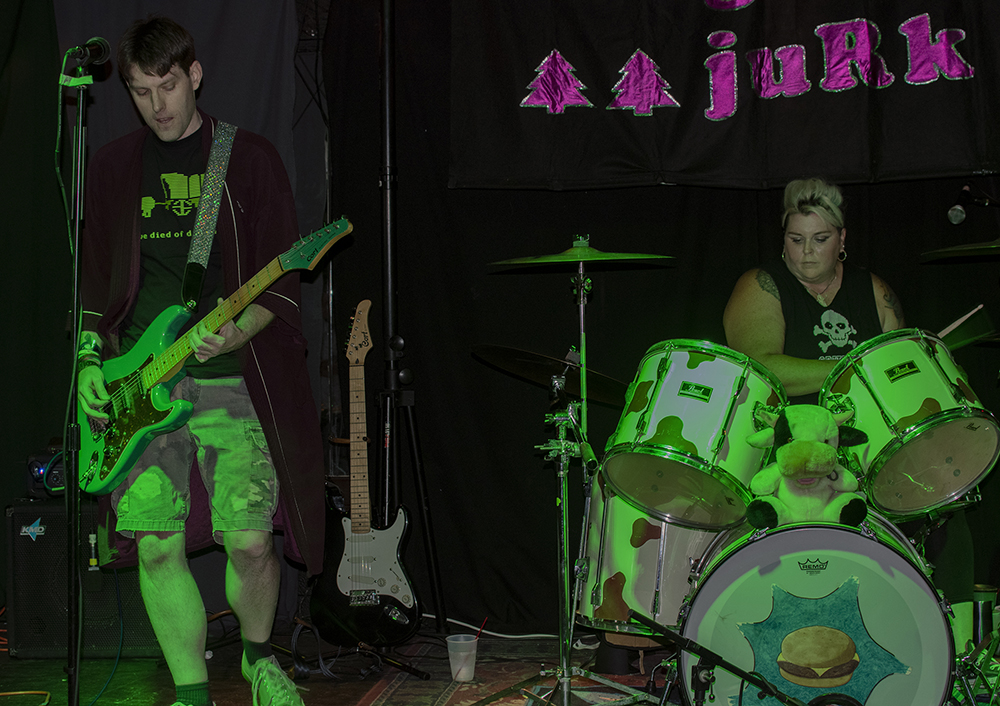 On Friday, June 28th, I made an eventful return to the venue where I covered my first local event review for YabYum: the prolific and punky Rip’s Bar of Phoenix. Like my visit last year, the bar remained frozen in time, with its regulars lining up for a night of “rock and excitement” headlined by buRgandy juRk, with support from Critical Miss, The Maybe Next Years, and El Googly Diablo. Or was it two years ago? That two-year binge period felt like I was frozen in carbonite.

The first set from Critical Miss brought me back to May 2019 when I first experienced her act at The Bro Show’s Brochella, as her booming, gritty soprano relayed lyrics of bitter life experience with a crooked smile. Much of the one-woman project consists of folk-punk acoustic instrumentals vocalized with theatrical affections which made me later question if that was her background. She is a smart cookie, and knows how to project and diversify her voice without straining.

Her opening track, “Everybody’s Toxic But Me,” playfully toys with the idea of blaming everyone else for your problems, but simultaneously having a leg to stand on with your side of the story. While most folk-punk songs dive into complete self-deprecation, the catalog of Critical Miss features a subject flushed with remorse about their past actions, but still holds steadfast in believing they are a good person.

“Critical Miss is actually a Dungeons and Dragons reference, [and] I’m a giant computer nerd who played [the game] a lot in college,” Critical Miss explained. “My real name is hard to spell, so it’s a fun name, [and] it’s hard to make fun of, since it’s [already] ‘Critical Miss!’

When I inquired about her unique vocal delivery, she corrected my theater background assumption, but amounted it to four years experience of the National Forensics Speech and Debate. 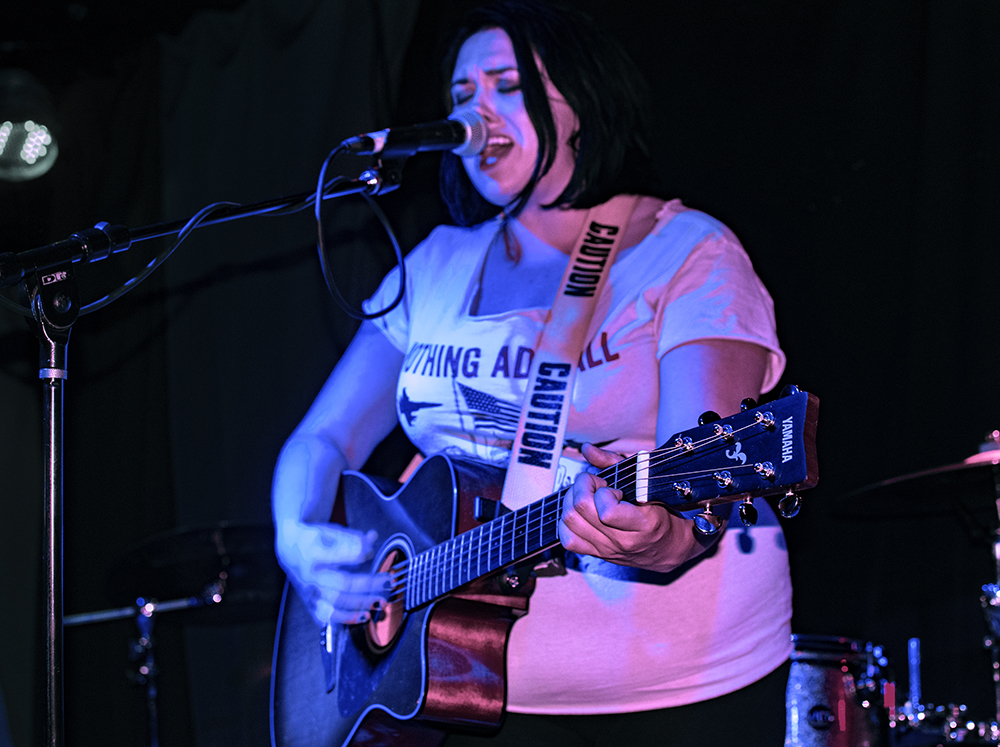 “I was a huge debate nerd and [president my senior year]; no theater, but lots of standing in front of people,” Critical Miss continued. “I just released the music video for ‘Crazy From You,’ courtesy of Soundphoria Media and Productions, there’s another music video planned for ‘Blackout,’ [and if] I can get one more song written, I’m gonna do a demo for my second album.”

Aside from retrospective tunes like the bittersweet “Crazy From You,” and the fun (and appropriate) “Blackout,” Critical Miss took the time to cover “Truth Hurts” from rising star, Lizzo, featuring Kat, the drummer for buRgandy juRk on vocals. Be sure to stop by her table next show to pick up an official Critical Miss lighter and free condom. 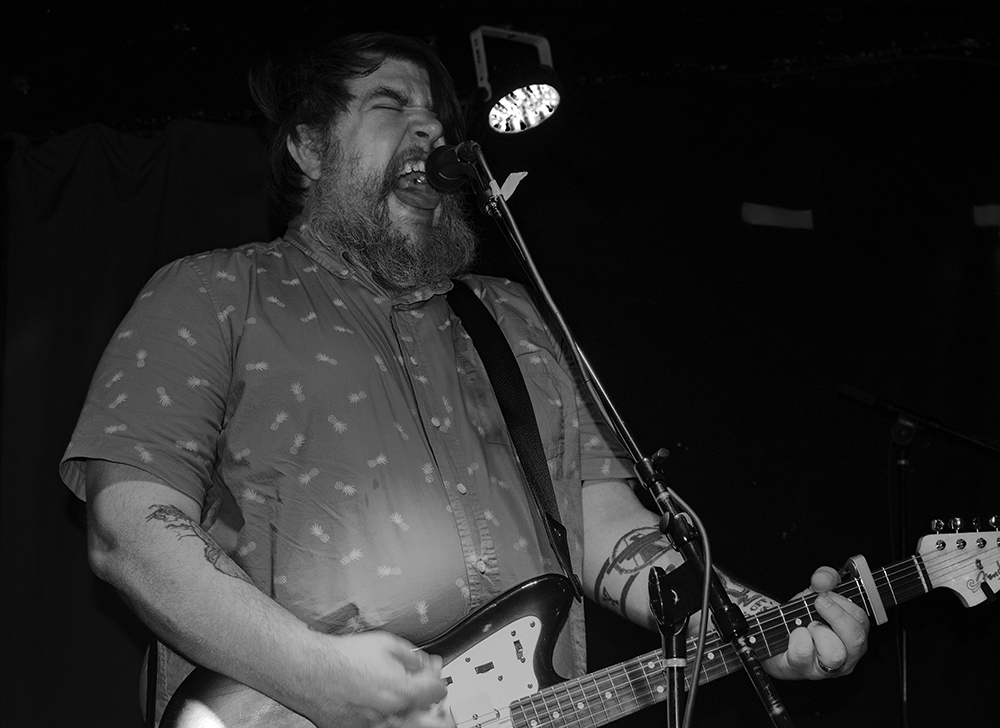 The next band took me by nostalgic surprise as I saw a man who resembled my cousin, Jon Kiely on stage. Adorned in smart, casual clothing straight out of the Dillard’s Men’s Department, El Googly Diablo entered and exited the stage looking like they gave no fucks in the cleanest way. From the neck down, their outfits were all “cookout business casual;” from above their garb were well-trimmed beards and hair, which were still punk, but they’ve clearly learned a thing or two over the years. I affectionately referred to them as “clean-cut punk dads” after the show when I had the chance to talk to the band.

Their music strangely skirted the sounds of old-school punk, blues, and the coolest dad rock the sock hop could play. Tracks like “Tiger Lily” showcase an intentional out-of-key delivery while somehow still staying within their range with a sincere sound. Their harmonies sometimes mirror a 1950s vocal group, but have a contemporary sound similar to what I would hear being but amped at a skate park. Their lyrical content in tracks performed like “Internet Dating,” “Jealous Ex Girlfriend,” have relatable themes lead guitarist C Thomas Warmouth belted over the bar’s maximum sound capacity among the haphazard lighting.

El Googly Diablo is a curious juxtaposition of old and new: when you pair up blues, punk and classic rock mixed with intentionally jarring vocals, the music turns out to be something like a smooth, hairy mess.

“It’s funny you say that, because we’re ‘dad punk,” exclaimed C Thomas Warmouth. “I would say we’re dream punk. We’re just trying to be an example of love in life [and music] is an extension of that.”

“We are dads who love to play music,” confirmed Paul Fairbrother, drums.

When I questioned Mr. Warmouth about his shirt with Pineapples, he saucily answered on how it doesn’t belong in pasta salad. 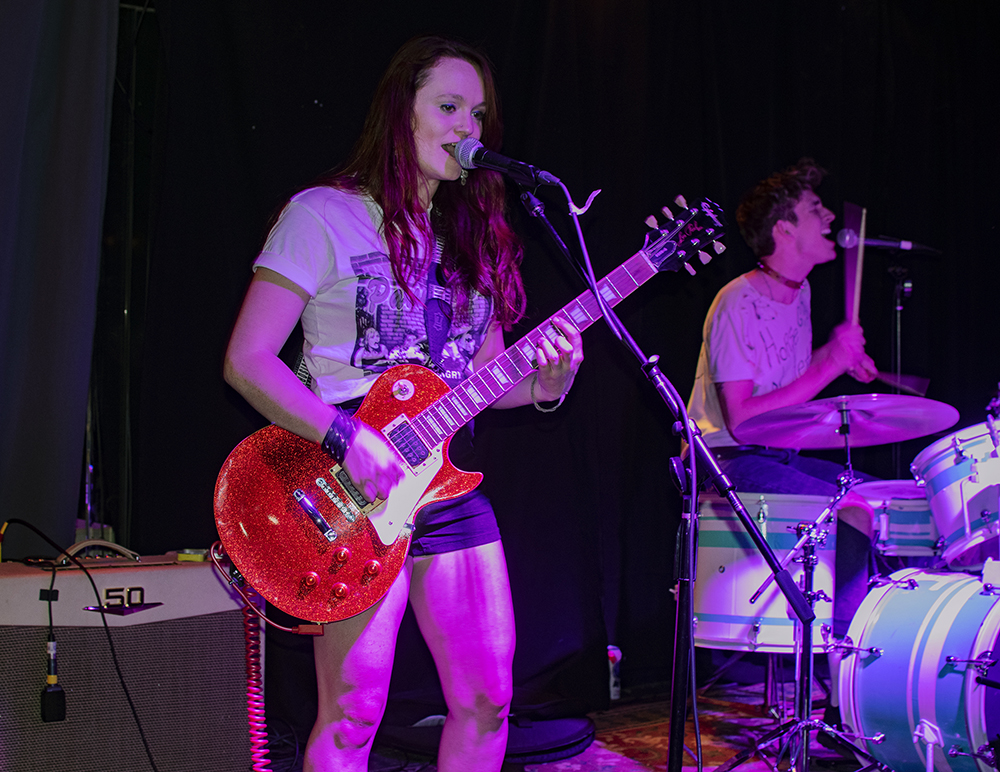 After smoking it up on the patio, I returned to my spot in anticipation of the fun and moody rockers, The Maybe Next Years. I first covered their band in photograph form when they played The Time-Out Lounge alongside 2000 Foot Turtle, but due to the cheap drinks and my increased intoxication, I felt incredibly intimidated approaching them outside of pleasantries. This time, I felt not only more sober, but more relaxed during their set after they opened with one of my TLC favorites, “No Scrubs.” Who knew punk-pop instrumentation could work so well for a 1990s R+B song? Surely not I, said the guy asking his readers rhetorical questions.

While they label themselves as punk, lead vocalist Sage carried the fluffy annotations of 1990s acoustic pop, while Ian on bass and Davey on drums contributed steady rhythm and aggressive delivery. Their musical clarity on tracks like “Marge Went Blind” sometimes resembled California Punk more than its Arizona sibling, and, mixed with their straight-forward- “business casual” attitude, made The Maybe Next Years an impressive trio.

During certain moments of the set, drummer Davey made sizeable contributions to lead vocals, with every member of the band sporting pipes to back lead guitarist Sage with a full-sound. While I would like to see them get a little crazy in the future and explore their weirder side, The Maybe Next Years are a good middle-ground for eclectic fans to get their hands on; their instrumentals and vocals are tight, their attitudes are cool as ice, but I am eager to see how far they can push their individual envelopes.

After their set, I caught up with the band outside of the venue to get the scoop:

“I think we started as Surf rock,” said Sage, guitarist and lead vocalist.

“That’s definitely the direction when I came on and [Sage] and Davey where jamming in the bedroom,” added Ian, bassist. “It was surfy-psychedelic stuff and, I guess, we got grittier over time?”

“Now I think we describe ourselves as ‘groovy punk,’ which is the best description I can think of,” Sage chimed. “We’ve been [together for] about a year, [and] we started with just me and Davey in his bedroom, then Ian came on a few weeks after we started jamming.”

“We played a show within a month of us playing together,” Sage said as Davey chimed in and described how they wrote a song the day of their first show.

The headliner of the night, buRgandy juRk entered the stage space and gave me the first taste of a band I should have heard of a long time ago. Although I had met their guitarist and lead vocalist Mike through a meeting of the Arizona Arts and Entertainment Industry Organization (AAEIO) a month ago, I had no idea how this mild-mannered gentleman was capable of screamed vocals so dastardly.

Every song was delivered with a harsh and robust attitude skirting through their diverse catalog (since I was 1 year old in 1995) from playing “The Violent Overthrow of Some Guy Named Jeff” from their 2018 album, Keeping That Pipe Dream Alive, to their closing song, “Heavy” from their 1995 full-length debut, Teeth; with one to two tracks representing every one of their albums, the only one left out was 2001’s Buy This, So I can Eat!!!.

Comparing their live tracks to their studio work, the multiple change of lineups didn’t seem to affect the “mojo,” with drummer Kat matching Mike in intensity while Casey jammed out on stage left, seemingly connected musically with the band, but still strumming the bass to his own beat. buRgandy juRk not only aggravated my carpal tunnel syndrome as I painstakingly went back and corrected the styling of their band name in this article, but also left me with the impression of, “what did I just watch?” While I found solace in the organized insanity that was Googly Diablo, I felt BJ was some conglomeration of Phoenix super-musicians, defying spacetime and staying baby-faced since the year of my birth.

Fun fact: if you Google their name, the first results you see are a dress catalog. 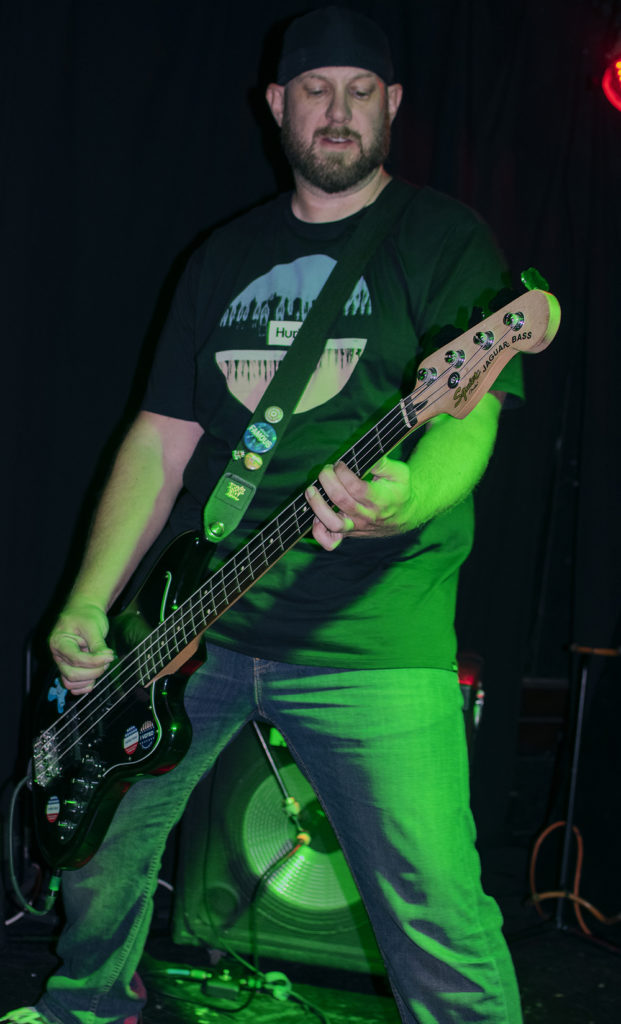 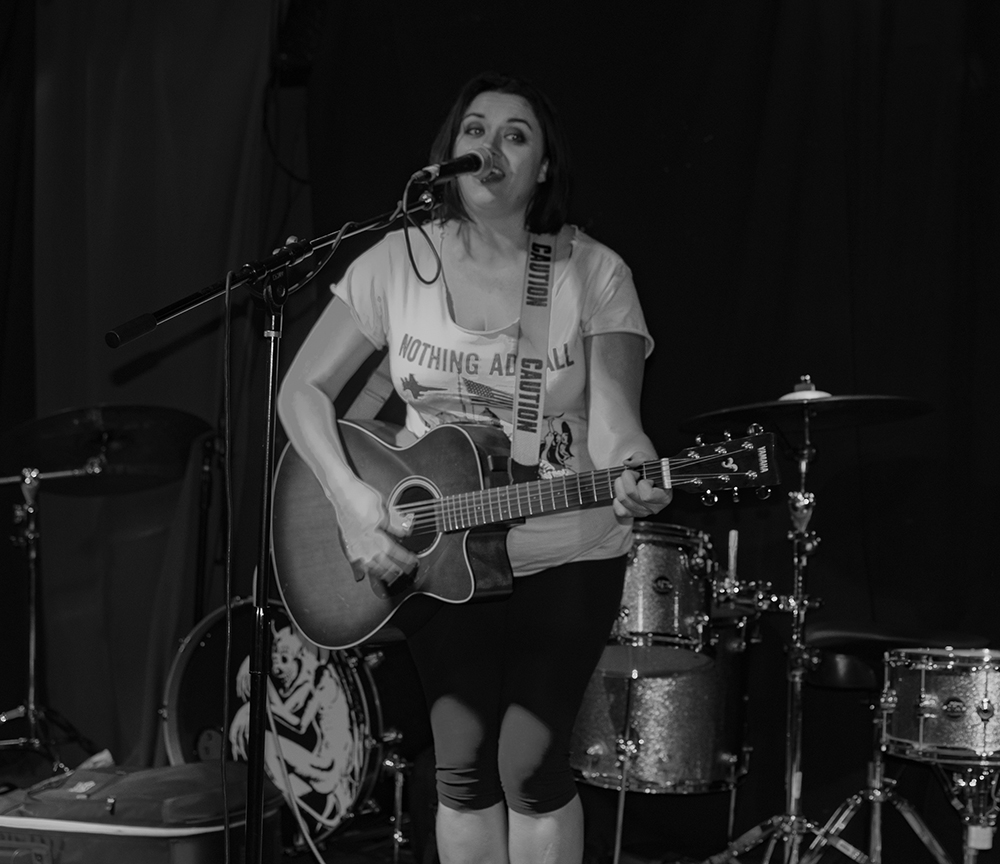 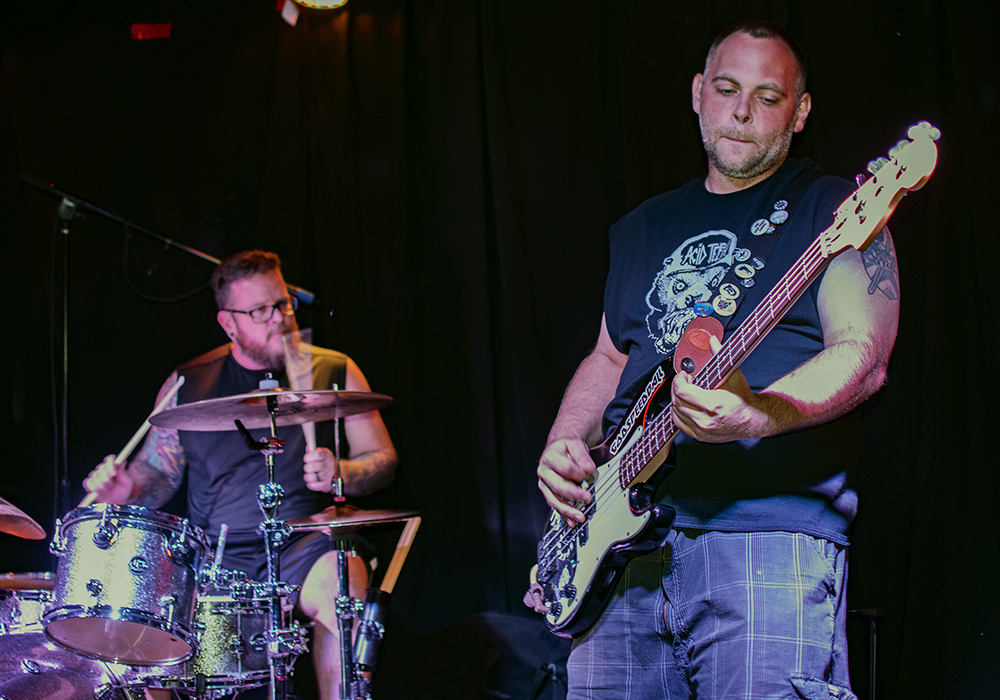 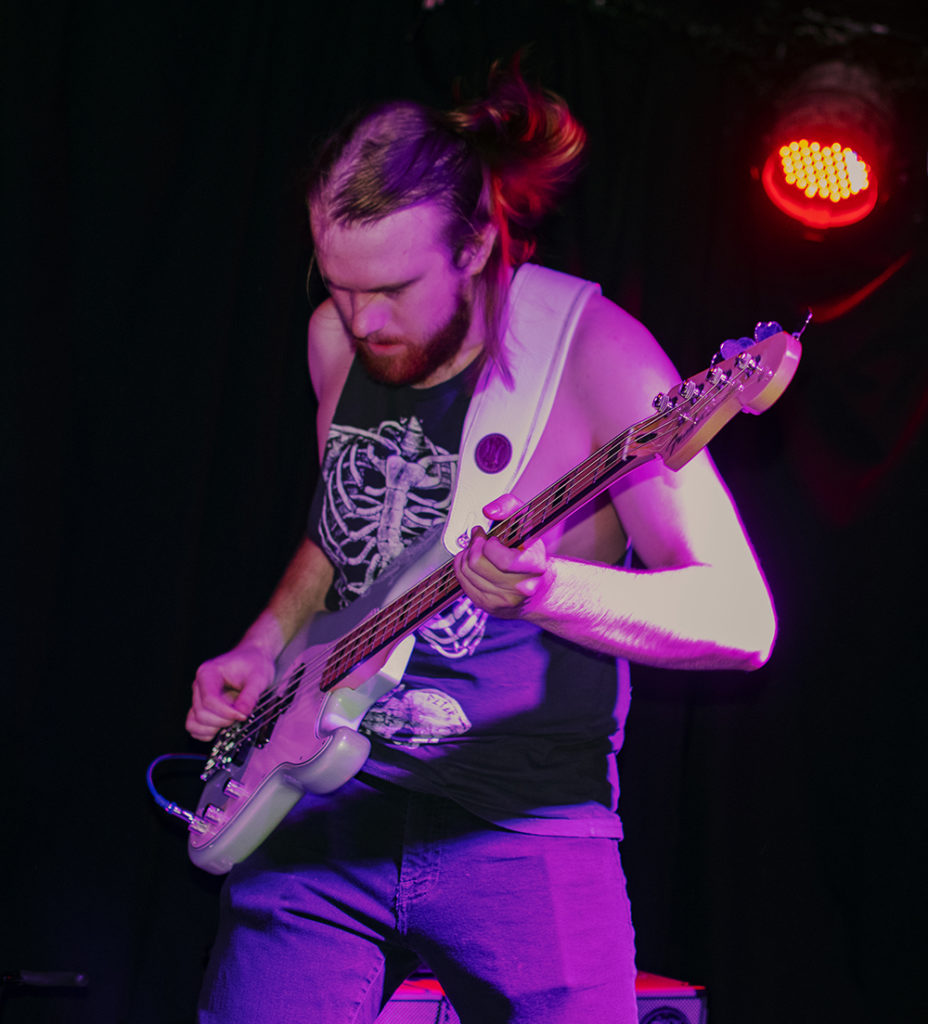 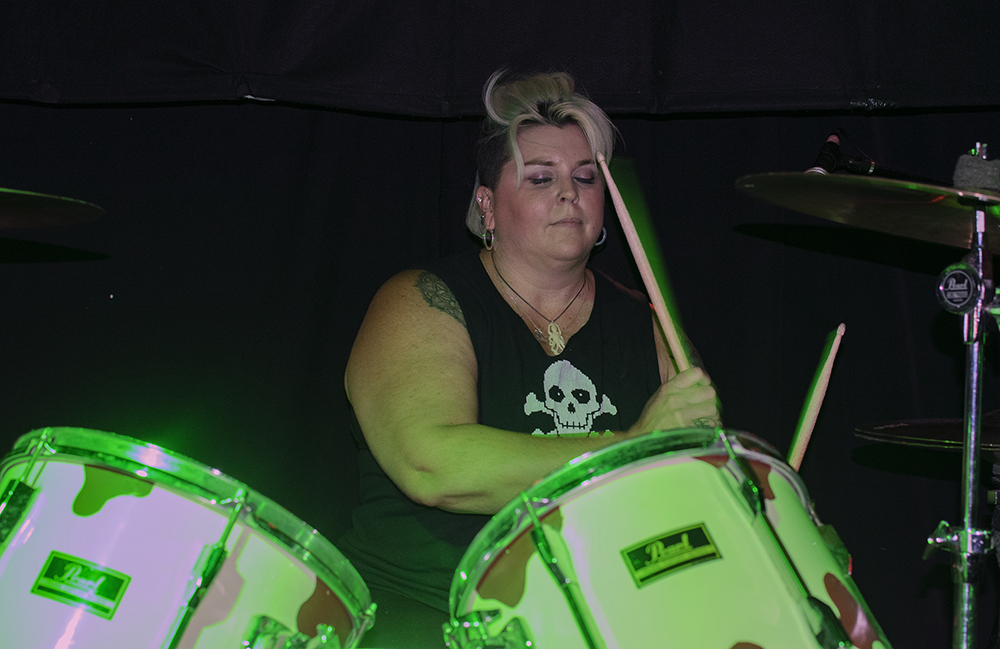 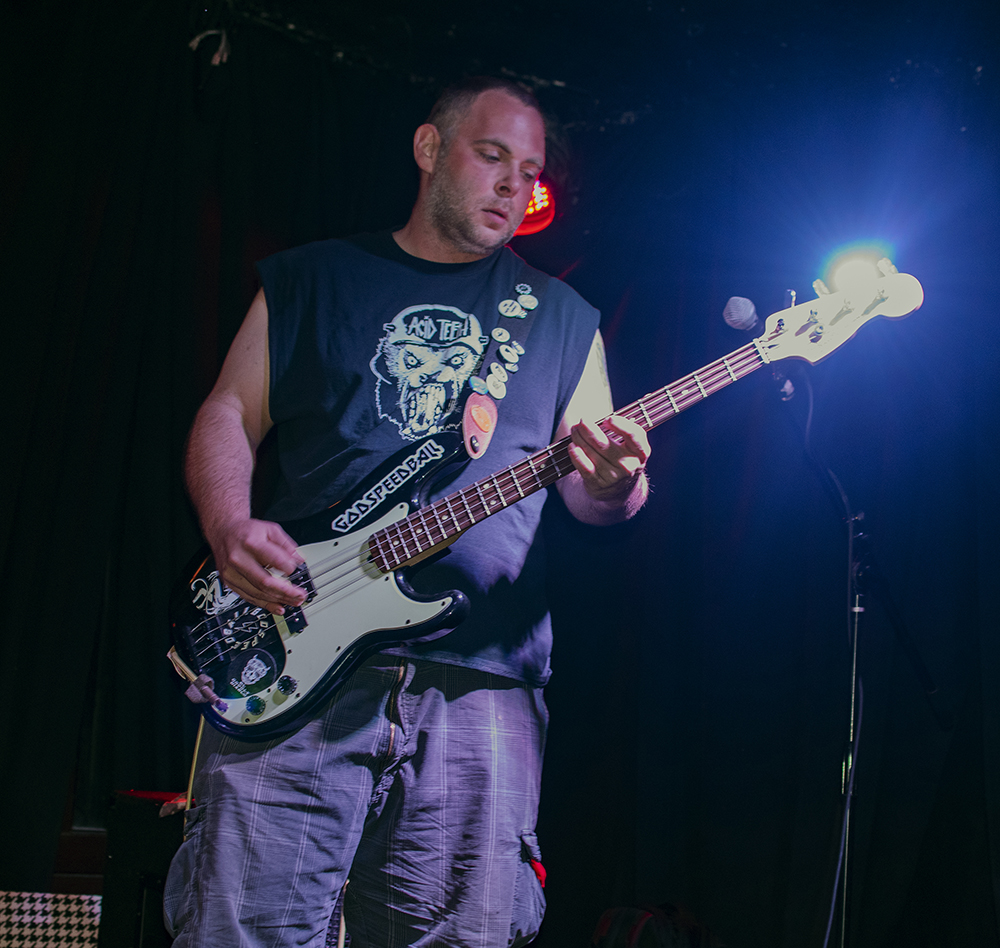 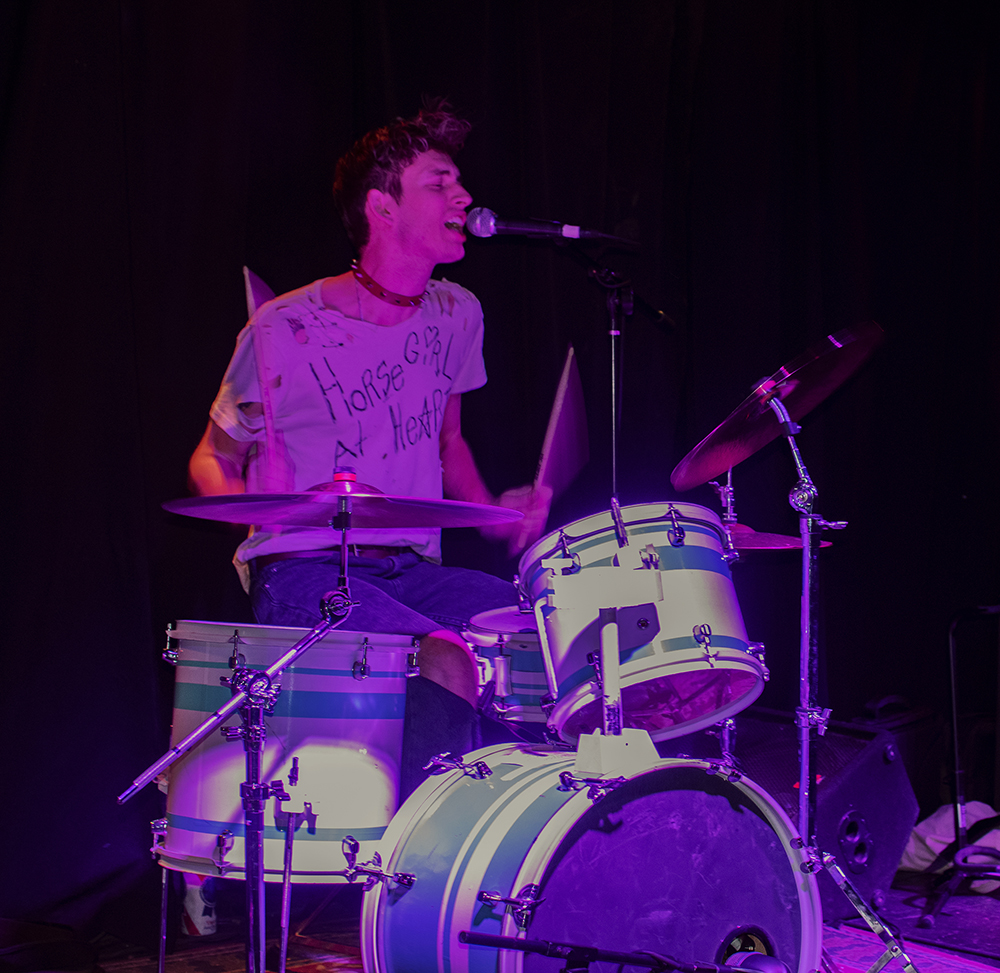 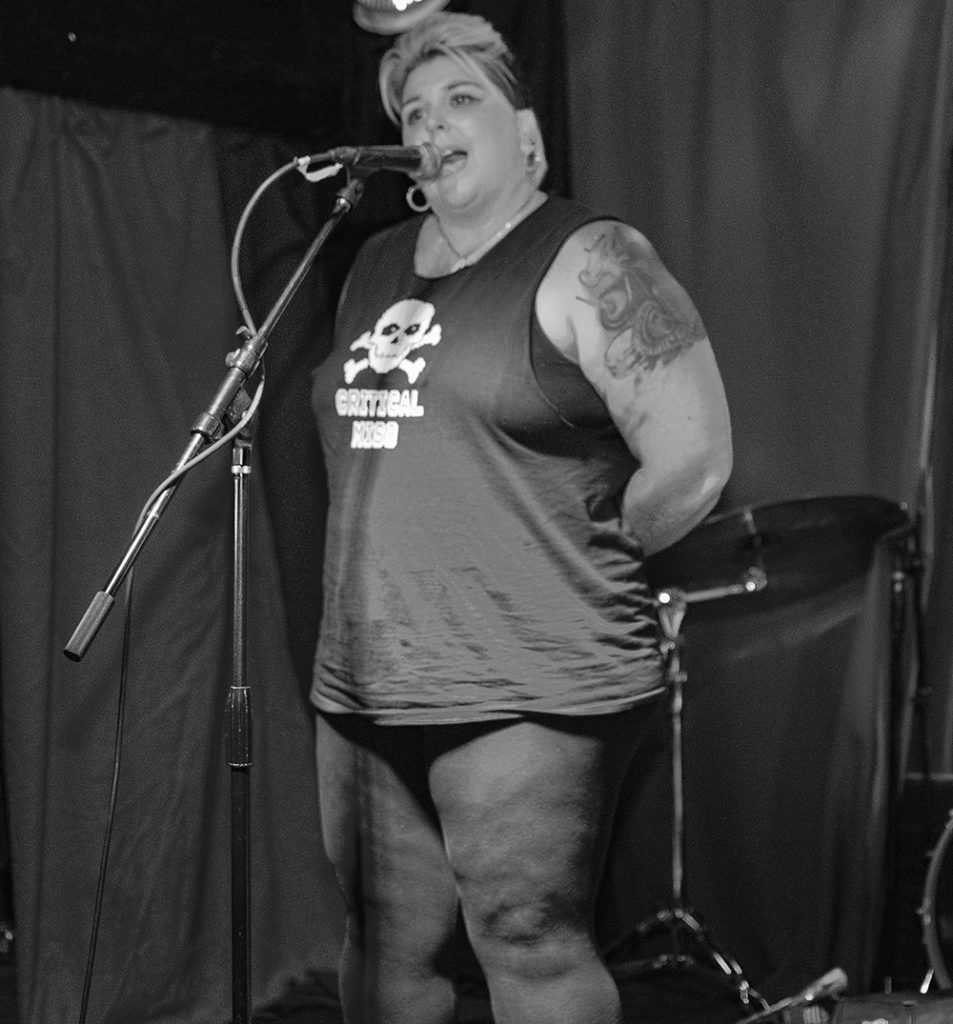 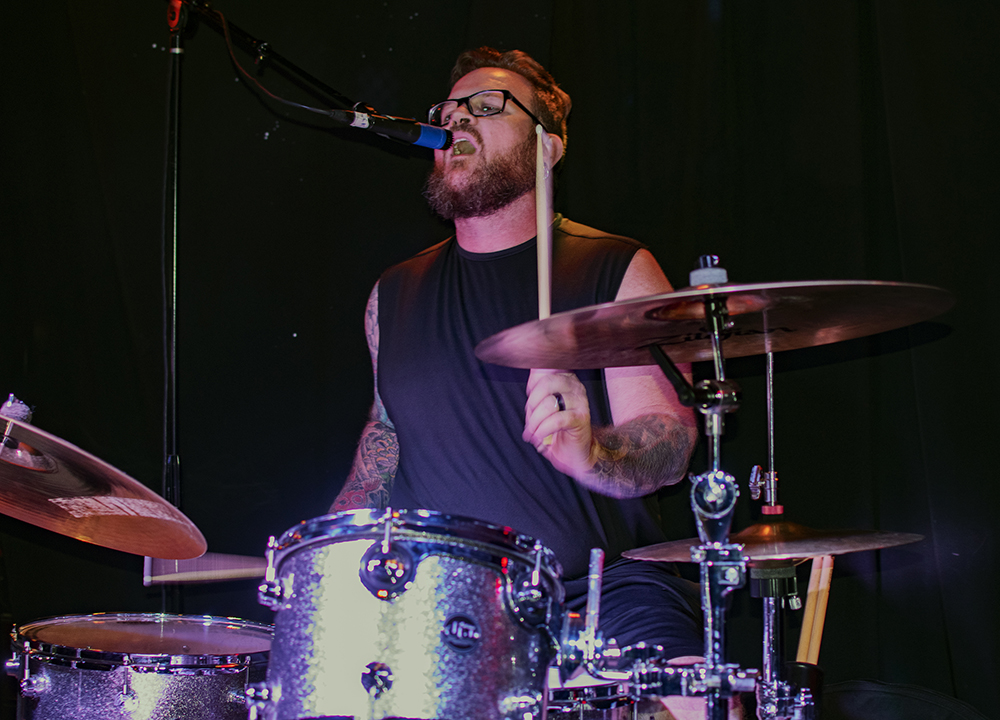 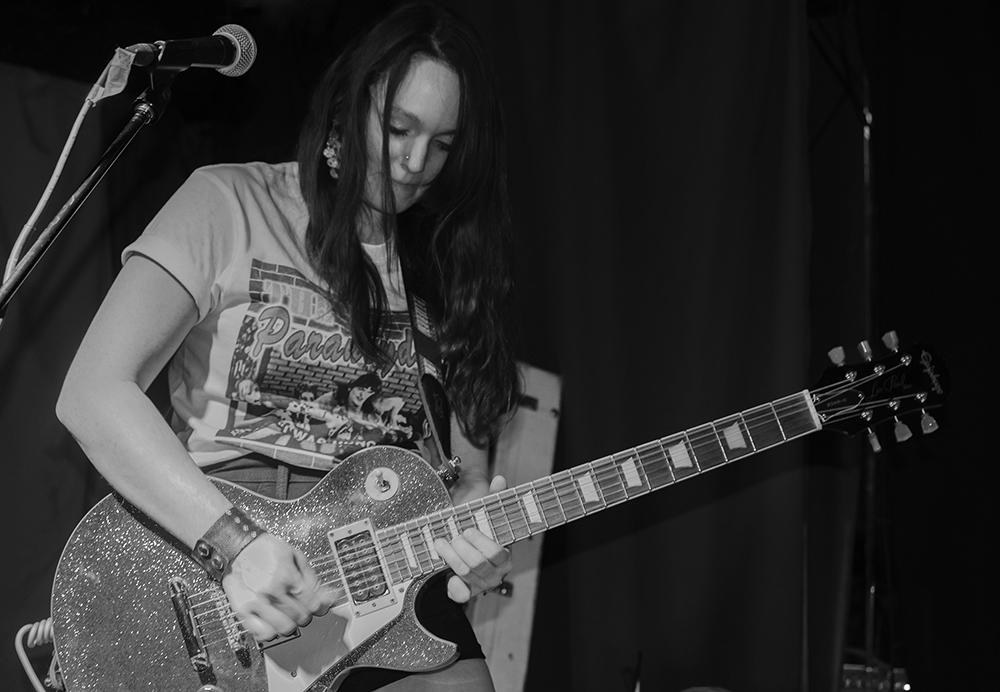 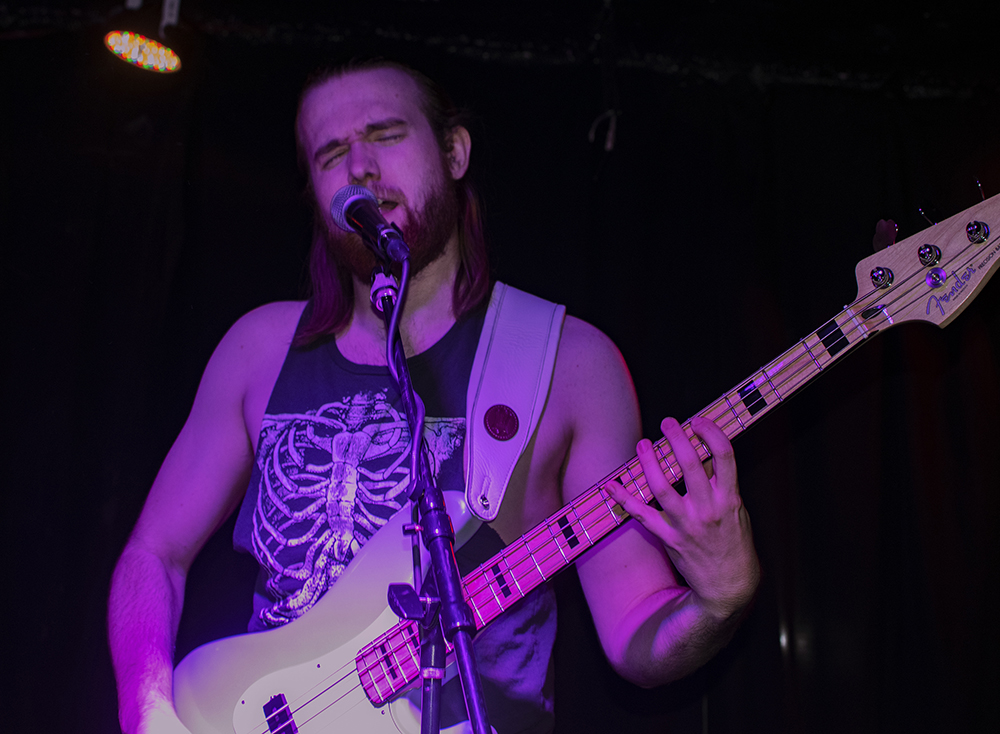 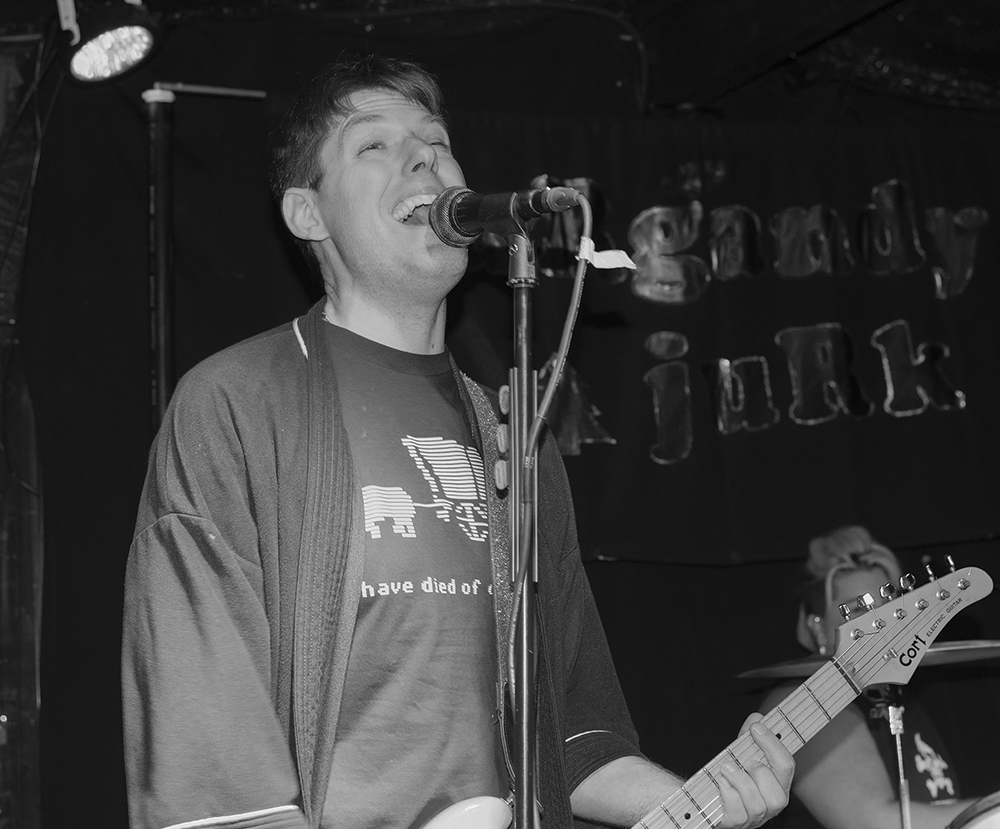