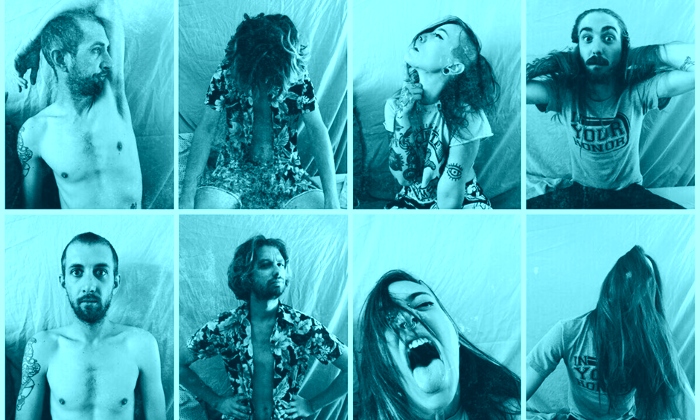 Hey, I don’t know about all of you, but I’ve been ridiculously depressed lately. Maybe it’s the season. In Arizona, we have the reverse of Seasonal Affective Disorder, meaning it hits us the worst at the start of summer and rolls right through August. But, if music does anything, it reminds us that we’re not alone in this world because our struggles are shared. Be it, heartache or unwanted dick pics.

“bullshit, ur a nice guy”

Basically, everyone is tired of dudes acting like dicks. Or showing us their dicks. But Chelsey Louise, songwriter and vocalist for Fairy Bones, is ready to call you out on that bullshit right here and now. “bullshit, ur a nice guy” is the first single since the band’s inaccurately named 2018 LP, 0% Fun, and serves as a reminder to fans both new and old that the Fairy Bones’ sound is ever-evolving. On this track, the band pushes the POP that gives their alt-rock sound its sticky candy-coating. And, just because the song has bounce, doesn’t mean it misses the moody mark. Chelsey has more angst in her little finger than most fellas can muster in their whole being. It oozes into her songwriting. But, you know, in a fun rocknroll way. More important than anything else mentioned here, this single means the band is getting ready to reveal their newest form in an LP somewhere in the not-too-distant future. And, of course, it’ll have that Flying Blanket Recording stamp of quality sound so get ready.

“You Should Hold Me”

Turn down the angst and the volume with Zach Kleisinger. You know, for those of us more given to a quiet, brooding moodiness. My kind of moody. “You Should Hold Me” carries a heavy measure of sorrow that resonates in Kleisinger’s deep voice and the vulnerability in his delivery. Yep, this Canadian songwriter seems intent upon breaking my heart with his somber, sweeping folk. This is one of two singles that Kleisinger plans to release this summer so follow/like/etc to stay apprised of what’s next for this emerging songwriter. Like, maybe a U.S. tour after he gets back from his European tour later this year? (Hint hint.)

“Where You Found Me”

This instrumental alt-rock track gets straight atmospheric with its moods. As a creature of ill temperament, I give it my nod. still motions covers some vast instrumental terrain, but the space is almost calm. Like the walk you take after an argument to cool your head and clear your thoughts. still motions is the new musical partnership of Thomas Brenneman (El West) and Chris Julian (Greeley Estates), two notable names in the PHX alt-rock scene, so expect to hear more from this act soon. Like, maybe, there’s a new EP lurking around the corner this year so just you wait. Maybe all your brooding walks can be set to a still motions’ soundtrack before 2020 rolls in. Until then, sink into “Where You Found Me” and really let it guide you through those internal tensions.

“The Ballad of Lonesome George”

This Phoenix 3-piece released a new 4-track EP back in June which includes this noir gem, “The Ballad of Lonesome George”. Yep, according to the band, Lonesome George was a real person with a less than stellar run in this world, but his life did inspire this brooding Americana ballad so that’s something. If you dig the dusty alt-folk of Michael & The Pentecost on “The Ballad of Lonesome George”, make sure you delve into the band’s latest EP, American Legion, which is available through Bandcamp.

A Night Without Monsters

We’ll Never Get Out of the Woods is the debut EP from A Night Without Monsters, a new music project from Tempe residents, Matthew Slusser and Sam Etling. Described as “an exercise in catharsis, fear, mental illness and honest self-exploration,” the new EP delves into some pretty dark spaces with its post-metal doom and gloom. We’ll Never Get Out of the Woods was written, recorded, and released all this summer. That might seem like a pretty quick turnaround, and it is, but A Night Without Monsters was intended as a cathartic purge of some monstrous emotions. And that’s exactly what you get on “Palinopsia”. A pain purge that starts with an extended instrumental before launching into the tumultuous layer of lyrics. Check out the new track from A Night Without Monsters and then head to Bandcamp to dive into the complete EP.