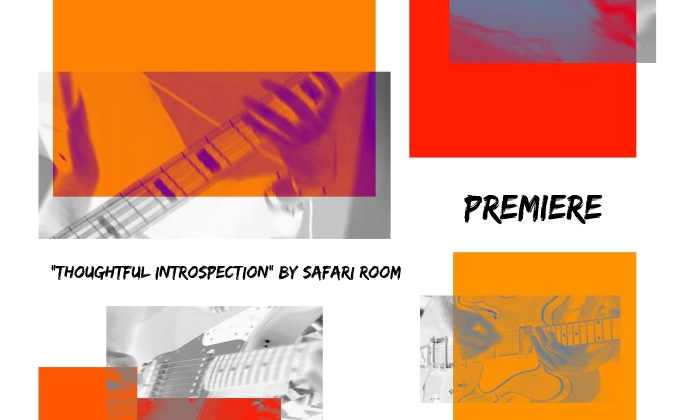 We’re super excited to premiere this new (live) music video from Nashville’s Safari Room. “Thoughtful Introspection” gives the 4-piece a chance to show their performance chops before heading out on the road for tour this summer. Check out the music video and then read out Q&A with Safari Room below. We ask about Nashville, music making, and what’s next for the band!

First, who makes up the quartet?

So, this track (and music video) were both recorded live? When and where did Safari Room do that?

Alec: Yes — we recorded it live! We tracked “Thoughtful Introspection” with a great friend of ours, Don Bates. His studio is in Nashville, and he does sessions like ours as part of a series he calls Around the House. Don has an amazing sounding space, and he’s a wizard at capturing a vibe. He runs around with his video camera during a single take (while engineering the recording), mixes and edits everything himself, and packages it beautifully. Enormous shout out to Don for making this happen!

How did the band come together?

Alec: The band started with just me, Emma, and our friend, Simon. We recorded a self-titled EP a few years ago that we didn’t play out with. We kicked it into high gear last year after recording Actual Feelings in March and releasing it in July. Chris joined in April when we started playing out regularly, and Austin came in shortly after that. We all met in college and have been playing music with each other for years prior in various iterations. Feeling mighty good about this one.

Is this single part of a forthcoming release? If so, EP or LP? And do you have an ETA for that release?

Alec: The single is definitely part of our next bulk work. Or at least the song is… We plan on going in and doing a full-fledged “studio” version of “Thoughtful Introspection”. As for what it will be a part of, an EP or LP, we should have a good idea in the coming months. Keep your heads on a swivel for that!

Are you natives of Nashville or did you matriculate to the area?

Alec: None of us are from Nashville, but we’ve all been here for about 5-6 years. I’m originally from Omaha, NE. Emma is from Austin, TX. Chris is from Newark, OH. And Austin is from Dayton, OH.

So, tell us a little bit about the Nashville indie scene. Are there favorite spots you like to play? Other hometown bands that you really like and want to shout out?

Chris: Nashville has a fierce independent music scene full of scary talented musicians who are often hustling and playing for many acts of different genres all around town. The Nashville community is supportive, but the level of competition is high simply because the talent is so deep. If you aren’t good at what you do and a good person, you don’t have much of a chance to move forward. Favorite Nashville groups include: Dynamo (fusion), Kiera Loveless (pop), and Doug McCormick (country). All unsigned and all busting their butts to make great music.

Austin: I really enjoy playing intimate spots like The Basement on 8th and The 5 Spot on the east side of Nashville. I’m from Dayton, OH, an hour north of Cincinnati and I really like the band Sylmar from there.

Also, for touring musicians, what are some stops you insist visitors make when in Nashville? Like, favorite restaurants or really cool record stores?

Alec: Grimeys for sure, if you’re looking for record stores. East Side Music supply is also just the best for gear. As for food, there’s a wealth of it, but some of my favorite places are a little dive-y. Mas Tacos, Taqueria Azteca, and Smiling Elephant are some of the best spots in town — you just have to look for ‘em.

Chris: I think we all just want to settle down with a medium sized cabin nearly out in the country with a few chickens and a babbling brook that you can hear when you sit on the front porch. But of course to achieve that we are going to bust our butts and hit the road this summer, record, and keep taking the opportunities that come our way to make this thing that we love (Safari Room) sustainable.

Alec: Definitely working on world domination. But first, we’re going to hit the road this summer and see where that takes us! We’re hitting a bunch of the Midwest and Southeast, spreading our wings a bit. We are working towards our next release but putting it together piece by piece, taking our time; we want to ensure it’s a strong next step while still being honest and personal.