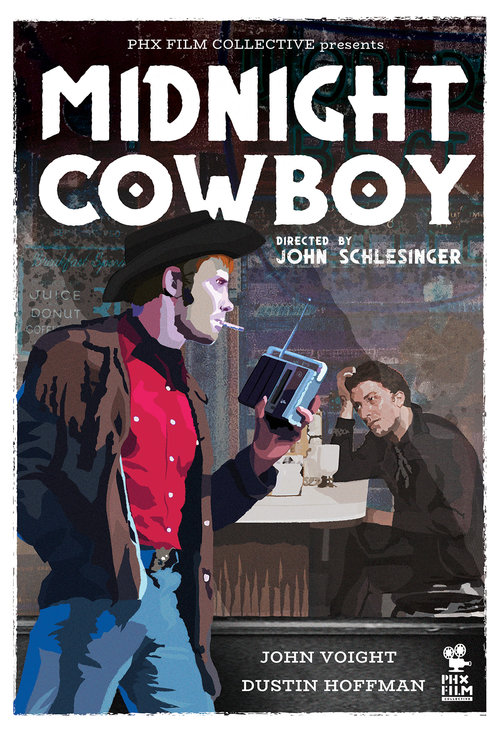 Midnight Cowboy is one of those films that sticks to your consciousness and memory for as long as you hold on to both. For every student of film it’s a must see and nearly everyone can remember the first time they saw it, and their reaction to it. It was one of many critically acclaimed X-Rated films released to theatres in the 1960s and ’70s–a time of shifting cultural perception, where the film industry didn’t know what to do with films reflecting societies social transformation in regards to sexuality and its honest depiction. Of note, it’s the only X-Rated movie, so far, to win the Academy Award for Best Picture. That was one of three Oscars it garnered, picking up Best Director (John Schlesinger) and Best Adapted Screenplay (Waldo Salt) as well. It wasn’t so much that society was going in for pornography as some would have it at the time, it was that the motion picture industry was lagging behind the cultural evolution of society.

When I was a film student in the mid-1990s the X-Rating was a big deal, and the motion picture industry was still having trouble dealing with both sex and violence in films, having at that time recently created the cursed NC-17 rating. By the time I was studying film it seemed rather ridiculous that Midnight Cowboy, A Clockwork Orange, Medium Cool, or Last Tango In Paris were rated X, but the MPAA always seemed behind the curve of popular perceptions and what society was accepting. In retrospect an R rating would have seemed fine for all of them, but that was not the case at the time. Midnight Cowboy was the first film like this that bucked the system.

An X rating at the time was intended to dissuade distribution, reduce attendance and generally inform fine upstanding citizens that this was a dirty film that could only be appreciated by the morally loose art crowd. The rating itself was a stamp of disapproval by the MPAA. John Schlesinger’s Midnight Cowboy was the first to defy this with its success and far from being forgotten as an art film of limited audience, it crept across the urban theatres and into the suburban sprawl and maybe more than a few, fine upstanding citizens were titillated with the idea that they were being naughty by seeing it.

This was 1969 after all, really the year that proved to be the death of the revolution, the year that mainstream society either decided to absorb and identify with what was going on or defy and decry it all together. It was the year of the Manson murders and Altamont–it was the dream of 1960s love, peace and freedom turning into a nightmare. The mood was getting moodier as harder drugs were taking hold in communities that had stuck to grass and psychedelics for some time. 1969 was both a beginning and an end, much of the art of the time and this film in particular reflects that. It was the age of the anti-hero writ large, something that had begun with Cool Hand Luke and peaks with films like this and only a couple months later, Easy Rider, which is perhaps the finest indictment of the end of the 1960s. Mainstream society was waking up to a new day and they had a huge hangover to face with the Vietnam War only worsening and the National Nightmare of Nixon and Watergate not yet on the horizon. After the dawning of Aquarius, the nation was about to get it’s comeuppance and lose its faith and much of that was seeded in this strange transitional year.

Incidentally, Midnight Cowboy was released a month before the Stonewall Riots in New York City. Comfortable white America was busy getting ripped a new one by the Civil Rights movement, the Women’s liberation movement and starting with Stonewall, what was then called the Gay Liberation movement. With its frank depictions of street hustling, male prostitution and homosexual sex acts, Midnight Cowboy was ahead of the curve–a harbinger of something else America needed to reckon with. I truly believe it’s difficult for folks on this side of the 21st century to understand how homosexuality was treated previously to the 1990s or 2000s–it was either ignored or abhorred, greeted with either ghastly remarks, uncomfortable humor or ribald violence. Alleged homosexuals were the center of gossip everywhere, and the closet was assumed to be the best place to keep ones “atypical sexuality.” There were “lifelong bachelors” and “women in comfortable shoes”, there was an entire segment of society that was hiding from visibility and far from celebrating their pride at the time.

Midnight Cowboy is a reminder of these times, a culture on the cusp of yet another great awakening, steeped in sadness, violence and two lead characters who were largely unsympathetic, yet remarkably engaging. The movie is sheer street poetry, ultimately a buddy film between a conman and a prostitute who find each other in the filth of marginalized lives, treated as refuse by an uncaring society. It is also, a simply beautiful film, excellently directed by Schlesigner, that careens over a fantastic soundtrack featuring Harry Nilsson’s “Everybody’s Talkin’,” with marvelous leads provided by Jon Voight and Dustin Hoffman. It’s no wonder why it was the Academy considered it the peak of cinema for 1969–it was a difficult story to tell and an even harder battle to sell, but they persevered and made it big. That’s the true spirit of high art, as true then as it is now, persevering despite the odds to help change the world. This movie brought an awareness to the back of the mind for many, and it changed perceptions for people if not of others, then perhaps of themselves.

PHX Film Collective is proud to present this special 50th Anniversary screening of Midnight Cowboy on Saturday, June 22nd at The Parsons Center for Health and Wellness / Southwest Center for HIV / AIDS. This presentation is made possible by their partners: Phoenix Pride and Stacy’s on Melrose.