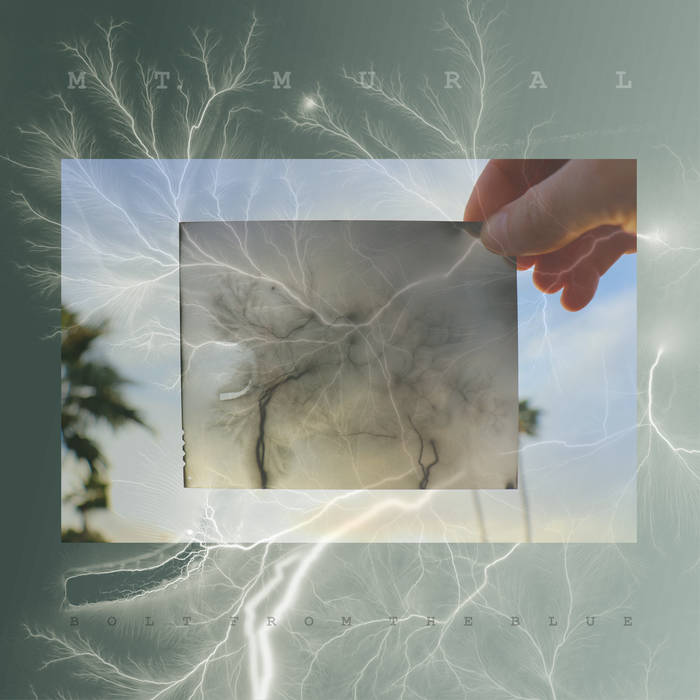 The YY crew had taken refuge inside The Copper Queen after an awesomely-long day of sideponeying at the Sidepony Express Music Festival in 2017. I seem to recall the band right before Mt. Mural was Zero Degrees North and there were literally folx moshing in the tiny dining area. However, when the shenanigans were over I remember taking a seat on the couch at the far end of the bar — unable to see the stage or who was setting up next.

When Mt. Mural started playing I literally bolted out of my seat. It was just so unexpected, what they played and how they were playing it, that I was captivated the entire set. I had absolutely no idea what songs they played but when I looked online for their music, alas there was only one EP available. And, while the Topograph EP is great, it just wasn’t enough to satiate my Mt. Mural hunger.

This is why I am so excited for the bands first full length, Bolt from the Blue. Years in the making, it’s what I’ve truly been waiting for since seeing them that chill, November night. And trust when I say that the wait was worth it: Bolt from the Blue simply delivers.

Opening with “Coin Toss” and establishing the staccato rhythms of Adam Kump’s guitar that you hear throughout the album, the song sets a great tone for what’s to come on Bolt from the Blue. Joel and Clint’s interesting drum patterns, Chase’s punching bass, and Jessica Kump’s lovely vocal harmonies not only grace this song, but the entire album as well.

Mt. Mural’s dreamy, alternative, indie rock continues through songs “Keep Me, Cherish Me” and “Pay Attention”, an early standout for me. While the energy is scaled way back in the best of ways on “Walls” and “Pay Your Past”, “Back Porch Swing” brings some swagger and light distortion back into the mix with a rocknroll riff and maybe the most straight-ahead drumbeat on the entire album… that is until the end of the song when it simply explodes.

Recorded at Stormbringer Studios by Jeff Thomas and mixed by Eamon Ford at Audile Collective, Bolt from the Blue just sounds so good. And you can’t overlook the mastering of the incredibly prolific Carl Saff. I just can’t stop listening to it. I needed to find out more about this album so I contacted Mt. Mural via email and asked them some questions regarding the process of creating Bolt from the Blue, operating a successful Kickstarter campaign, and what expect next from the band.

Mark Anderson: It seems like at least two years were put into making this album. Could you delve a little into the process of creating Bolt From The Blue?

Adam Kump: You’re right, this album has really been years in the making and it was a p r o c e s s. Between 2016-18 we wrote and jammed together as an outlet during all of our craziest ups and downs; major health problems in our families, healings, losses of loved ones, births, counseling, and some especially happy reunions with those who were seemingly long-gone. In the time it took for us find a good engineer, we played many of them around town long enough for most of them to mature.

When we did finally serendipitously link up with Jeff Thomas for recording, the whole process from there still took a year because of scheduling & lack of funds. It took us a few long weekends sprinkled across the first half of 2018 to get the tracking completed with Jeff. Then Jeff moved to Nashville. Then the Kickstarter. Handoff from Jeff to Eamon Ford for Mixing. Then Eamon moved to NY which ended us with a grand total of 72 hours of mixing long distance. Finally, we shipped off the mixed tracks in Feb. 2019 to Carl Saff in Chicago for Mastering.

Definitely was a process, but we are so happy that we have this album that accurately portrays our vision.

How did you hook up with Jeff Thomas and where did you record this album?

Joel Ackley: I met Jeff randomly one night while I was bartending in Queen Creek. He mentioned that he had worked with a bunch of artists like The Eagles, Toto, Mariah Carey and Smashing Pumpkins! I was impressed by his career and I finally nervously shared about Mt. Mural with him and how we were in search of a good engineer. I was pretty sure he would be unavailable or uninterested. After a couple weeks, I saw Jeff walk through the door of the restaurant. When I asked if I could fix him something to drink, he said “No thank you, I’m actually here to give you my business card!” I was thrilled to find out he had listened to our music and wanted to work with us. He had a really awesome professional home studio out there in Queen Creek and was able to record us with old-school Grammy-winning techniques. But as Adam mentioned, he has since relocated to Nashville.

Did you use any cool, different gear on this record? I feel like you guys get some pretty experimental sounds on Bolt From The Blue…

Adam: Back when we recorded Topograph, I used a guitar I built in a class at MCC [Mesa Community College]. Now I’m playing a Squier ‘J Mascis’ Jazzmaster and it’s become my spirit animal. But as far as experimental or new, some of the craziest sounds come from the Stylophone GEN X-1 and really wacked-out textures from Ableton and Logic. This was also our first time including an electronic drumpad in “Long Lost” and “Walls” and the analog Volca Beats drum machine is heavily featured in the title track.

What is your songwriting process like? Do you bring song structures to the band and flesh them out or do you guys jam out some things and work those into songs? Maybe both?

Chase Pettyjohn: The true answer is both. There are songs on the album that have been in the works since before Topograph. Then there are songs that were written in 30 minutes, played live the following night, then taken to the studio with only minor tweaking before being sent out for mastering. I think you can hear that in the songs. It seems like the more guitar driven tracks with big riffs are more developed on the spot and the slower more delicate songs with ethereal synth and intricate guitar are the ones that have taken their time to season.

An interesting thing about most of the songs is a lot of them were motivated by rhythm. Joel is great at not being boring with his playing and that really pushes Adam and me to find parts that follow suit. One of my favorite things about Mt. Mural is when Adam starts riffing and Joel comes in with something that just makes us both grin wide and the attitude in the space changes and that’s when the next Mt. Mural song starts. 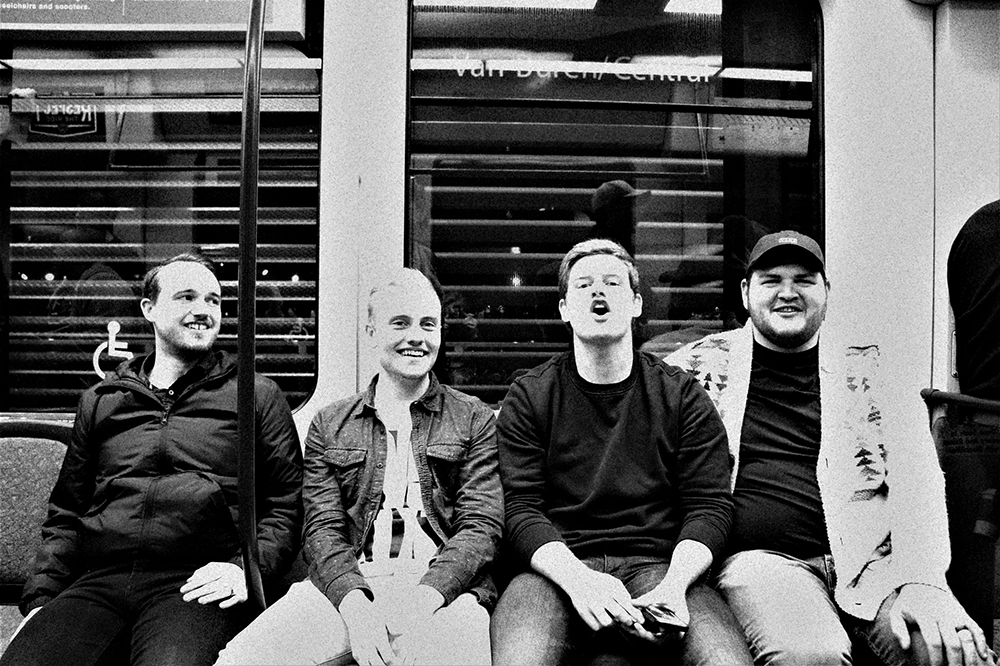 I feel like Bolt From The Blue covers a lot of ground sonically as well. Who are some of your influences? I feel like you make emotional surf music for the modern listener but that could just be me…

Adam: That’s cool, thank you! To validate that, I did grow up in the surf of Huntington Beach, CA and I am and emotional creature, so maybe it’s in my blood.

Chase: What’s nice is we all have the same goal music-wise but we all come from different tastes. I’m into Bleachers, Ra Ra Riot, the War on Drugs, Thrice, Silversun Pickups, The Front Bottoms. Prince and Paul Simon. I don’t want to use them as influences but I listen to them a lot so there’s gonna be seepage. 1000% chance of there being no crossover with the others.

Adam: What Joel said, I would add We Are The City, Pomegranates, Grizzly Bear, MGMT, & Mac DeMarco just because he has a gap in his teeth like me. And I would consider Silversun and Mr. Simon as well.

Clint Wilkins: Pushing into new musical areas is a constant. No one song in the album sounds like another to me. Some songs had a singular idea of what to feel like. For instance, the song “Bolt from the Blue” was inspired by Thom Yorke’s solo albums that are heavily supported by drum machines and bear more emotional weight. Also, Gotye was a big influence and someone we look up to.

You ran a Kickstarter campaign to fund this album. Could you explain what that process was like for you and the band? As someone who has also used an online fundraising campaign to create an album, I felt it was quite nerve-wracking. To not just throw your art out into the public sphere and see if anyone has interest but to be constantly watching the ‘time left’ vs. ‘money in’ was a lot of work…

Adam: I completely agree, yeah. It’s funny because we already finished recording entirely with Jeff before we decided to finally make the Kickstarter to urgently raise funds quickly for mixing. It was a big push, and to get people on board really put the PAIN in campaign. Biting our nails, having to bother everyone around us with the pitch asking for them to contribute. Not fun. I will say, on the plus side we got to see how many people not only pity us, but how many show up out of nowhere and are truly invested in why we were doing this. The campaign has been over for months, but we still have more rewards to deliver. When we finally wrap all that up in the next couple weeks, I think we will be able to sleep better.

Love the album artwork too btw. Could you explain to our readers how it was created?

Adam: My wife Jessica is our Art Director for the album covers and contributes lyrics and harmonies for many of our songs. She was inspired by the title BFTB and found a way to electrically shock Large Format Photo Film in a dark room using a Wimshurst Machine. When it gets developed it leaves the actual perfect exposure of the “lightning”. It came out even better than we hoped. From there she had this cool idea to hold up the negative in the sky to represent ‘seeing the light through the dark’.

What’s next for Mt. Mural? Do you have a release show planned? Summer tour? Music videos??

Chase: We’ve got a couple shows lined up over the next few months. We’ve partnered with our local record shop to do something for the album which should be really exciting. As far as touring, through Kickstarter we are obligated to play some out of state shows for some of our backers. That might turn into to a couple of weekend jaunts around the southwest. So for now it’s business as usual, with some videos on the way but now you can also listen to Mt. Mural from home which was the biggest goal for us and BFTB.

Is there anything about Mt. Mural or Bolt From The Blue that you’d like our audience to know but I failed to ask?

Adam: We are so grateful to everyone who backed the Kickstarter. And especially those who would’ve if they could. Thank you all, you made our dreams come true.

Clint: This might already be evident, but we are so proud of ourselves for finishing it and for sticking to our standards even though it took a while. Now we hope others can feel what we felt when we wrote the songs and just enjoy it.

Catch Mt. Mural on Aug. 22 with INNERVIEW and Aug. 26 with locations TBA and at The Trunk Space on Sept. 28th with J. Martin (WA). Be in-the-know of when/where the band is playing by following them on Instagram and Facebook.