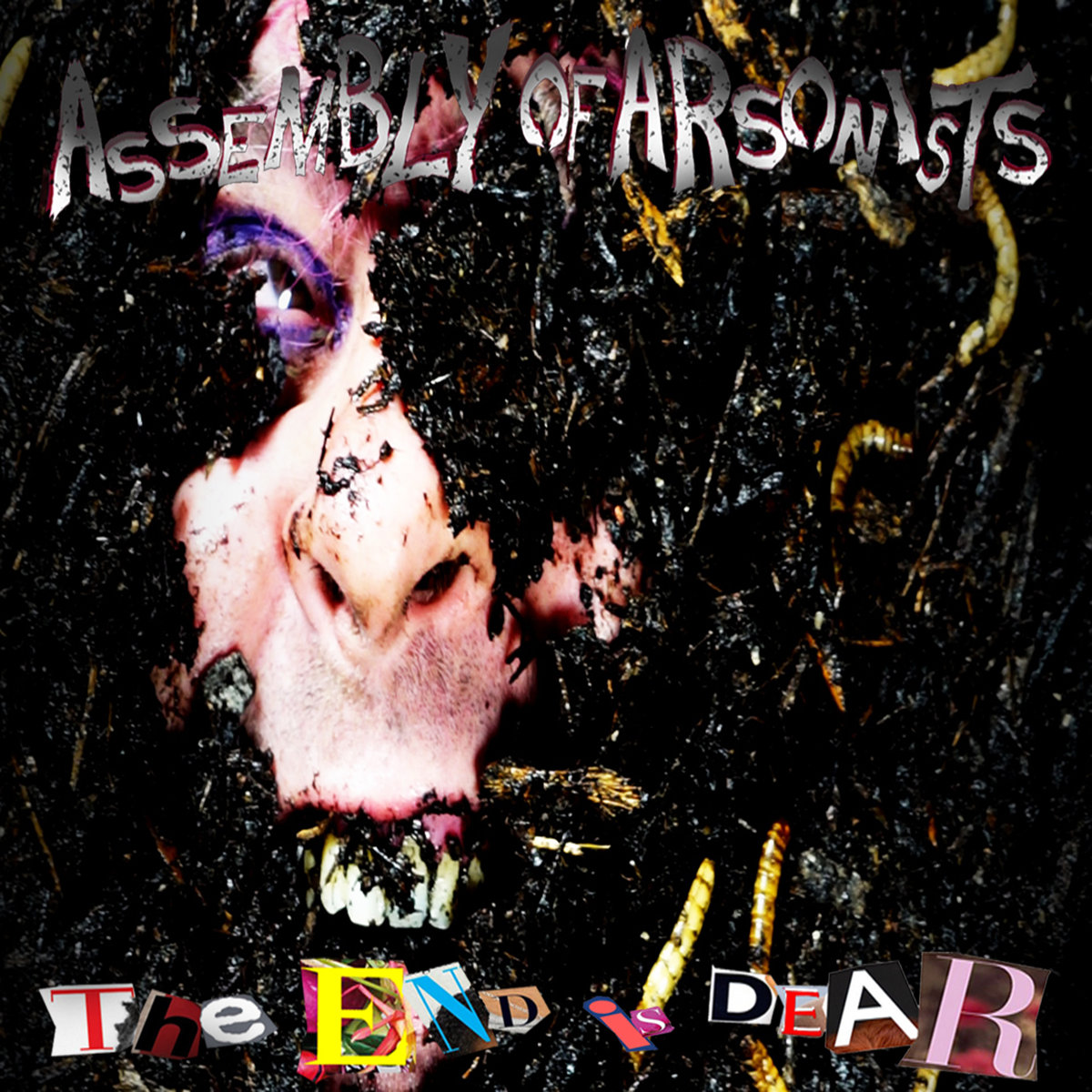 If you haven’t spent much time contemplating your own mortality, I suggest you take a moment to look toward that looming abyss before entering the dark circus that is The End is Dear, the new album from Phoenix’s Assembly of Arsonists.

Of course, I’d be negligent if I didn’t immediately bring up the video series AoA created to provide a complete visual accompaniment to the album. In this digital age, more and more musicians are taking album releases to multimedia platforms. What we end up is akin to Beyoncé’s Lemonade except, you know, this one is masterminded by a homeless anarchist who seems half mad musical genius, half Batman supervillain.

Travis James sits at the helm of the Assembly of Arsonists as songwriter and principle vocalist. And, he’s the aforementioned Batman supervillain, armed only with a sharp lyrical sense and a quirky/creepy aesthetic… and maybe a purple and black striped baseball bat.

Under his leadership, despite a lack of conventional resources, AoA was able to bring The End is Dear to life both musically and visually. The results of this tremendous effort is an album of operatic scope. And I’m sure anyone who loves gutter punk &/or musicals would agree, even if the subject matter is a little dark.

The album opens with the song “Goodnight” and sets a suicidal tone that stays with you throughout the album. Each track on The End is Dear echoes with themes of depression, world-weariness, and destruction. Destruction of the self, of society, of the world around us, and, perhaps most importantly, of ideas anchored to antiquated value systems.

What follows is an existential carnival ride through dying oceans and crumbling institutions and unceasing despondency. All set to a lively tune with lyrics that will have you laughing at your own despair.

Personal favorites from the album include “What Lies in Ashes” in which the narrator predicts, “I’ll end up thick in the fog, sick as a dog, liquored up and unlucky, hellfire hot, dead as the fraudulent gods your righteousness rode in on.” I mean, that’s not really hopeful. That’s the opposite of hopeful. But, when you hear it play out in the song, it’s pretty catchy.

Other stand-out tracks include “Can’t Follow Ghosts”(a love song, of sorts, but once again,  the track is drenched in loss) and “Everything Is Everyone’s Fault” which features a stellar vocal performance from Sarah Amstutz. And, frankly, the “Self-Praise Chorus” on the closing track is Broadway-worthy orchestration.

Make sure you give the album a listen and, if you’re feeling brave enough, dive into the visuals provided below while you check out my interview with songwriter Travis James from the Assembly of Arsonists about the making of The End is Dear, the video series that goes along with it, and a whole lot more below…

What inspired you to make a complete visual accompaniment to the album in the forms of a music video series?

I really wanted to both experience and share a more involved, hands-on, multifaceted approach than is expected from an average album. It was partially for the fuck-yeah of it, but it would be a bonus if creative people might see it and imagine what more they are capable of if a practically homeless psychopath could put in this much effort with almost no money. I literally get to say I set myself on fire for this album.

I cram a lot of concepts into my songs, and usually make an involved lyric sheet for albums to add a visual element to them, so devoting to at least one video per song was a way of not settling, and bringing out even more of what is in the content of the songs.

The suicide ideation seems to be strong on this album. Is this a Camus-type thought experiment? Or are you about to check out? I feel like I should call a hotline.

If you’re gonna call anyone, call a coroner. By the time they’re on the way, I won’t want to disappoint. Truthfully, my favorite person in the world started a rumor that I was going to kill myself after I put this record out. I don’t wanna let them down either, they’re my favorite person for a reason.

Uh, we really don’t want you to kill yourself after this album? Anyway to change your mind?

Well, like I said, it’s mostly just a rumor I started. Death isn’t the only way to die. There’s always someone better to kill than yourself. But I’m fine with whatever happens. The end is dear!

To get to the nitty gritty of The End is Dear, where did you record it? Who took part in your assembly of arsonist musicians?

I’ve sworn an oath to protect the identity of some of those who risk their social standing to participate in my vision. But Mark Sunman of the Haymarkety Squares played piano, banjo and violin on this record, and he’s been playing with AoA for like 8 years now. Aaron Hjalmarson (The Freeze) has been playing drums with us for like 7 years. Diego Galvan of Bad Times played bass. Chili’s, the actual restaurant, played trombone on a few tacks. But the collab highlight of the album is Sarah Amstutz vocal cameo on a song- she steals the show.

I’m just curious how you describe the Assembly of Arsonist sound? Crazed circus punk? Gutter opera? And, perhaps more importantly, who you draw aural inspiration from?

I try not to describe it. But there’s a reason I’ve spent enough time referring to myself as “the Meat Loaf of punk” that several reviewers have printed/posted it. Say it. C’mon, Say it.

So, did the “Meatloaf of Punk” receive any professional music training? Or are you just an uncanny natural? A musical autodidact?

Haha. You said it. I didn’t think you were gonna say it. And yeah, self-taught… but this whole loading the questions with flattering suggestions thing is really inhibiting the ease with which I prefer to aggrandize myself. It’s not that we both shouldn’t be complimenting me, it’s just that I’m much better at it than you.

Soooo, rumor has it you broke a pretty long vegetarian streak in the name of the art for this album. True or false?

True! I learned that a mouthful of raw, wriggling roaches is not for me. However, the subtext of your question about the entomophagy in the “Plenty Dead Fish” video incidentally boils down to whether or not I swallowed- and a lady never tells.

You definitely present some pretty repulsive aesthetic challenges for viewers in the series that accompanies the album – from dead fish to hissing cockroaches. Shock value? Or challenging normative standards?

Eating roaches and bathing in dead fish were just things I wanted to do anyway. People eat insects all over the world, and there are some who speculate that insects are inevitably to become a dietary staple as the reliability of our food supply dwindles alongside the instability of our environment. So, the impulse to look away from the screen as the giant bug’s goop squirts on my tongue might be an ancillary impulse to look the other way as we frack our future into a reality where we all end up with roaches in our mouths. Pardon me, but you have something in your teeth.

As for the wheelbarrow full of toxic sludge and dead fish, I just got fed up enough with being told to bathe that I finally decided to give it a shot. Regarding “shock value”, my dead fish and roaches are tame compared to the horror of “normative standards”. A million things that taste worse than roaches are being force-fed by the humblest of the daily behaviors we depend on. Would you like fries with that?

During the making of the music videos, did you ever hit a wall and reconsider the scope of your vision? Like eating a cockroach or squishing dead fish?

Again, the bugs were on the menu, that was happening whether alone in an alley or for a music video. Those things were a given, but my lack of resources and novice skills definitely made the scope of 10 videos quite daunting at times. I didn’t hit a wall, but it sure took a long time spraypainting out an entire song on one.

But I was mindful of how creating through a learning curve (like with video editing) was a way to gain more skills and abilities in video/audio. A lot of planning, coordinating, supplies, and crafting went in to the heavier concepts for the 3 “full music videos”, but I actively developed most of my ideas around what I would be able to mostly accomplish on my own – hence cellphone videos of being in bed, or the candle burning at both ends swinging above some of my book collection.

Are you just adamantly opposed to bathing? No way, no how?

While there *can be* practicality to *some* sanitation, our obsessive Clean Culture was crafted by the figuratively filthy hands of puritanical social janitors through centuries of sweeping the beauty of filth under the rug. A Lysol trickle-down Home Economics- sterile countertops & sterile lives, bleaching everything into a shiny suburban white. I say clean your mind, not your house. It’s common to associate cleanliness with Godliness, and I’m really not a fan of that fuckin’ guy.

For more on Assembly of Arsonists, check out their Facebook page.