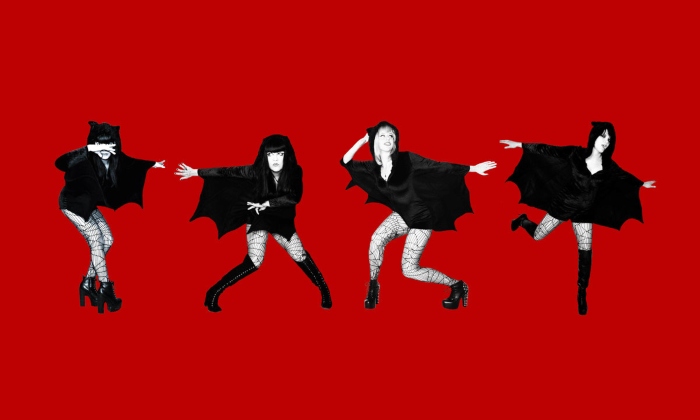 This track kicks things off on I Like You But Not Like That, the new album PHX garage rock grrrls, The Darts. “Breakup Makeup” incorporates some 60s psych sounds (like the organ) into their high-energy alt-rock and sets a feisty pace for the album that follows. The band is currently away on tour overseas, but they’ll be back on home turf on July 11th for a show at the Yucca Tap Room before they head out  again, this time for Vegas. Check out “Breakup Makeup” and then head over to The Darts’ Bandcamp page to secure I Like You But Not Like That on slick red vinyl while you still can. Tick tock.

I’m super hooked on the ultra rowdy sounds of Washington D.C.’s Teen Mortgage. They’re bringing sludgy, fuzzed out punk rock straight from the garage to set fire to your speakers. This powerhouse definitely sounds like they’re packing more than just a two-piece outfit, but you’d be wrong. “Falling Down” finds Teen Mortgage shaping out a lush, if chaotic, soundscape with only two players. Make sure you listen to this track start to finish so you can hit the highs of the shout-it-out chorus before descending into the soupy sludge of sound that closes the single.

This catchy single from Tempe pop punk act, The Maybe Next Years, will have you bouncing around before you’re three bars in. “Cowards” is the first single following the band’s cassette release, Sorry Kid, which came out on Leisure World Tapes last month. Sure seems like these lively punkrockers aren’t showing any signs of slowing. Make sure you check out “Cowards” then go listen to “Marge Went Blind” to see if you should score that Leisure World cassette (hint: you should).

Bear Call formed in San Francisco’s Sunset District, in a rented house mere steps from the beach, and that sense of place comes through in the psychedelic haze of the band’s indie rock sound. Last year saw the release of Bear Call’s debut LP, Anything’s Better Than Falling, through Resurrection Records and a West Coast tour. This year, the band is barreling forward with their sophomore effort, Fancy Acid, which is set for release in September. “LOL Naw” comes to us from that release. If hazy, sun-filled, psych rock sounds up your alley, or you feel you mighta missed out on the Summer of Love, don’t miss out Bear Call.

Maybe I’m super about this song on this particular week because I gave up cigarettes so I am a mix of slow, simmering aggression and bursts of unanticipated rage – just like “Void” by CIVILIANA. All joking aside, this alt-rock track from Canada’s CIVILIANA deftly moves from a barely but carefully contained calm to a full on rager in about two minutes. Like I said, this song is a lot like my first week as a non-smoker, but CIVILIANA is helping me hold true with the cathartic release offered in the “Void”. Check out the video below!