This is the neo-psych album my summer has been waiting for. The Tucson quartet known as Mesquite might not be on your radar yet, but this album should definitely land them there. Their debut album, Caliche, just came out on May 19th. In the Caliche’s opening track, “Waking Up”, listeners will encounter a vibrant, jazz-infused number dressed in sunshine yellow. With that first track, Mesquite provides just the first of many meaty sonic experiences that you’ll find on Caliche. More than seven of the 12 tracks on the album clock in at over five minutes because Mesquite puts more emphasis on the psychedelic-side of pyschpop. Basically, Caliche will take you on a sunny sonic journey of mellow neo-funk.  I can imagine passing an afternoon lounging on lawn furniture near the pool with a mint julep and floppy hat listening to this dreamy album on repeat and getting lost in its layers. It’s too difficult to play favorites on this release, but “Silence Song” is an early standout for me because this track really hits upon that ultra modern Mesquite sound, as well as the crisp orchestration and production that brings it to fruition on Caliche. Don’t sleep on this band. You definitely should hear Caliche by Mesquite. Definitely. Like now.

Sometime In The Last Few Years

It’s been just about three years since Ancient Egypt last released music and the band’s new album, Sometime In The Last Few Years, finds them entering a dreamier sonic sphere. The release kicks off with “Hardly Anything” and sets a mellow psych-tinged indie sound that sets a temperament for Sometime In The Last Few Years. There are some funky permutations in the instrumentals across this album that set it apart from all the other bland indie sounds out there. From the reverb-heavy guitars that break into the flow of “Touchdown Jesus” to the synth-glitter on “Big Sound”, Ancient Egypt knows how to work some magic in the soundscape to keep things funky and fresh. Sometime In The Last Few Years has more of a casual “bedroom recording” feel than previous releases and that might have something to do with Ancient Egypt stripping down from a trio to just Sean Gordon, who recorded everything himself on this release. The result? Ultimately, the new album does have a new level of intimacy and, at the same time, a rawer sound. Fans might be divided on whether they prefer the more-DIY, less-refined sound of Sometime In The Last Few Years to previous albums, but I like that Ancient Egypt is exploring new aural territory and not just staying in the safe zone.

Phoenix rockers Post Hoc are set to release their debut album Wilderness, the Villain on June 15. Fusing mixtures across the broad spectrum of rocknroll, an early preview of the album had me floating in my seat. Wilderness, the Villain is definitely an album meant to be listened to on the whole as the songs melt into one another — sometimes with soft impact, other times with abrasive strike. The five piece has been at it for a few years, releasing their 2017 EP, Daffodils, as well as last years “Tarantino” single. This pushes beyond what they released previously however into a sound proper for their first LP. Produced by the band and Cory Spotts (Greeley Estates, Job For a Cowboy, Bless The Fall), and mastered by Mike Kalajian (Circa Survive, Emmure, Senses Fail, Dear Hunter, Saosin), Wilderness, the Villain sounds great — like a psychedelic-screamo-indie-Rumshpringa — I was not surprised to learn this album took two years to write. Although it may start out a little slow and moody with the title track, by the time you get to “Ceramic Elephants” you’ll be able to tell how much the album has “picked up”. And that’s still only the beginning…  Post Hoc will be releasing Wilderness, the Villain at The Rebel Lounge on Saturday, June 29 with support from Panic Baby, The Bittersweet Way, Coyote Tango, and an afterparty hosted by Rad Dude. Tickets can be found here. While not every moment on Wilderness, the Villain is my exact cup of tea, it’s well worth checking out… when it comes out! 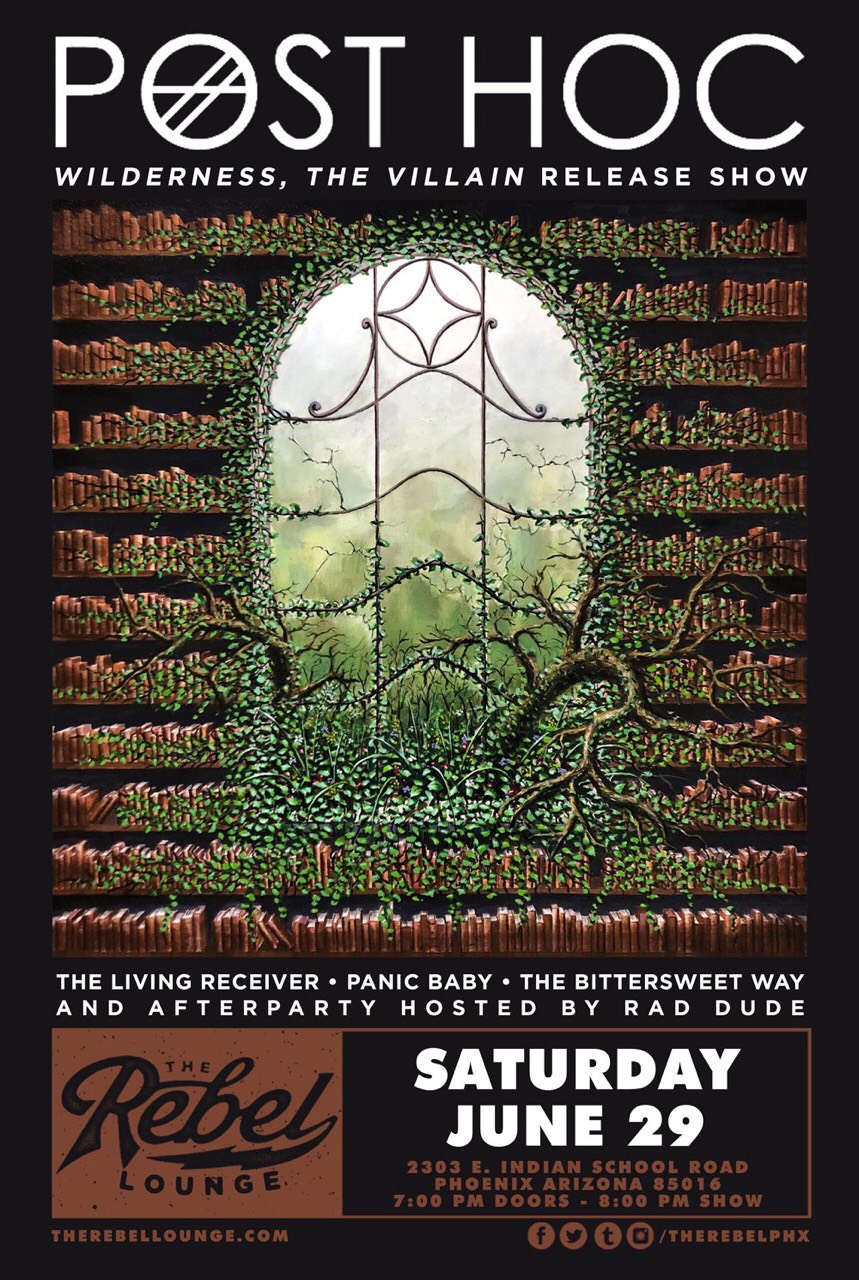