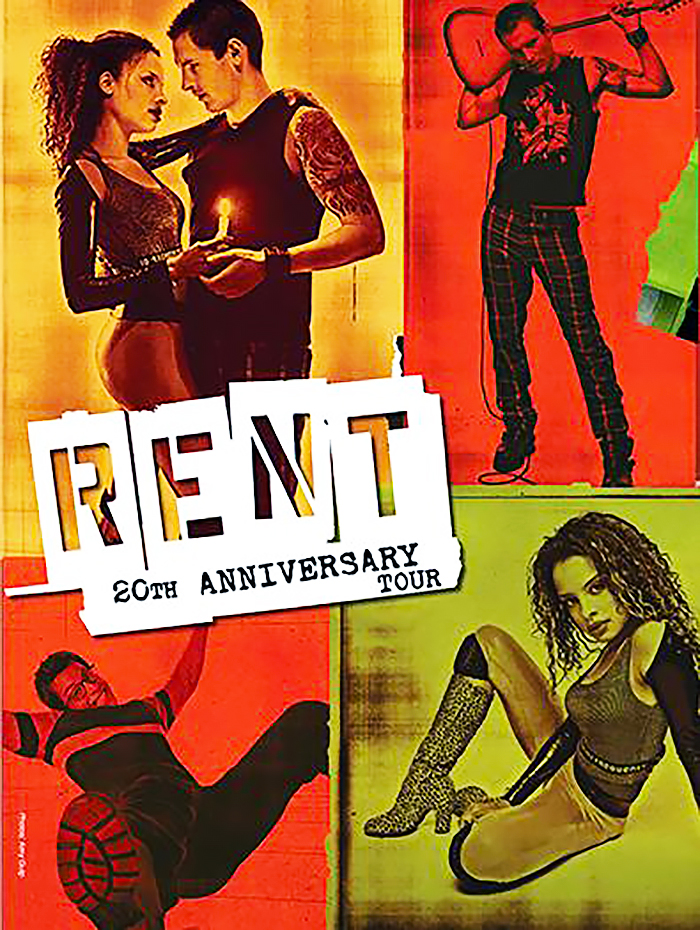 It’s a tragic, recurring cycle. Every generation loses artistic visionaries too soon, and the mourning of that loss embeds itself into the fabric of popular culture. Jonathan Larson, the creator of Rent, died suddenly in 1996 at the age of 35, leaving a gaping wound in the theatre-loving community upon which he had already generously bestowed his talent and vision. Although he was posthumously awarded a Pulitzer Prize, as well as several of the most coveted Tony, Drama Desk, Obie and Outer Critics Circle awards, he passed before seeing his greatest success open on Broadway, and its subsequent meteoric rise.

Larson was brave enough to address and embrace the stigmatized, and tell their stories honestly. At a time when people were ignoring them (at best) and dehumanizing was the norm. And in doing so he left an indelible mark on our cultural landscape.

The Rent 20th anniversary tour has ascended upon ASU Gammage, introducing this influential piece to new generation, while satiating the nostalgia of the ‘oldest millennials’ whose high school and college years are fondly remembered with “Seasons of Love” playing in the background.

This tour pays homage to the original beautifully. Staged with simplicity and ingenuity, as it should be, and lit with intoxicating precision. Roger’s “One Song Glory” early in Act One, the way the low light projects his massive ghostly profile on the back wall, demonstrates early-on that technical components do not need to be flashy or ornate to be an absolutely breathtaking accompaniment to the story.

The production is packed with such incredible talent that it is easy to forget how large the shoes are to fill. Rent helped launch the careers of Idina Menzel, Daphne Rubin-Vega, Taye Diggs, and so many others who have developed into huge Broadway, television, and movie stars. I suspect several in this young cast will follow in those footsteps. They are utterly incredible. There is no weak link. No performances that fall short. These up-and-coming actors are making these iconic characters their own, and absolutely slaying these roles in the process.

Deri’Andra Tucker’s Mimi is sexy and soulful, with a mindfulness that betrays Mimi’s youth and uncontrollable inclination to forces beyond her control, namely heroin. She conveys wisdom well beyond her years, while simultaneously bringing the house down as she mischievously mounts the rafters and belts “Out Tonight”

Angel is one of the show’s main anchors, arguably the most important of them. A drag queen (constructed by Larson, long before queens were fully mainstream thanks to a decade of the RuPaul’s Drag Race franchise) with a heart of gold, who brings everyone together and alters the trajectory of everyone’s lives. Javon King not only masters Angel’s iconic jumps and spins (in heels, no less), but also exudes a near-tangible joyfulness throughout the show. Angel savors and appreciates each moment of living, and King portrays that enviable quality without making any noticeable labor of it.

DevinRe Adams is simply spectacular as Tom Collins. He is simultaneously unassuming and overpowering. With a voice that lingers, playing back softly in your dreams, and a performance that leaves you wondering how you have not heard of Adams already. Joshua Bess is stellar as Roger. Subdued and tormented. Broken and desperately in need of saving.

Lyndie Moe is the best version of Maureen I’ve experienced. A wildly eccentric character, prone to unintentionally hurting those she cares about. Maureen is tricky to pull off. She is not inherently likable, as many of the show’s characters are. Moe is seductive, stimulating, intriguing. She manages to make Maureen’s bizzare “Over The Moon” performance piece implicitly compelling, much more so than I had ever thought previously.

Logan Marks is delightful as Mark, the show’s narrator. A videographer capturing the goings-on of his friends and community, forced to confront the choice between selling out and starving to avoid it. Marks is youthful and sweet, with an appropriate tinge of naivety.

Rent is probably not your grandmother’s favorite musical. It’s gritty and dark, packed with overt sexuality and rampant drug use. Although some of its most powerful sociological reflections have dimmed in the last 20 years — the AIDS epidemic has thankfully subsided recently, for example — its core themes are universal. Existence is fleeting, and each minute within it is precious. Every moment shared with those we cherish is a gift to be savored and appreciated. And art can fulfill us, friendship can sustain us, and love can save us.

The Broadway community can often be counted upon to pay homage to the people who have shaped it. In that vein, Jennifer Ashley Tepper recently created and directed The Jonathan Larson Project. A series of intimate concerts at famed Feinstein’s/54 Below, showcasing Larson’s unknown works, performed by some of Broadway’s biggest stars and crescendoing with a recently-released album.

Rent is playing at ASU Gammage through Sunday June 2, and tickets are still available. They can be purchased via Ticketmaster and through the ASU Gammage website, and start at just $30 per seat. If you are a lover of Rent with high expectations, or someone completely new to this groundbreaking piece of theatre, this show will not disappoint.