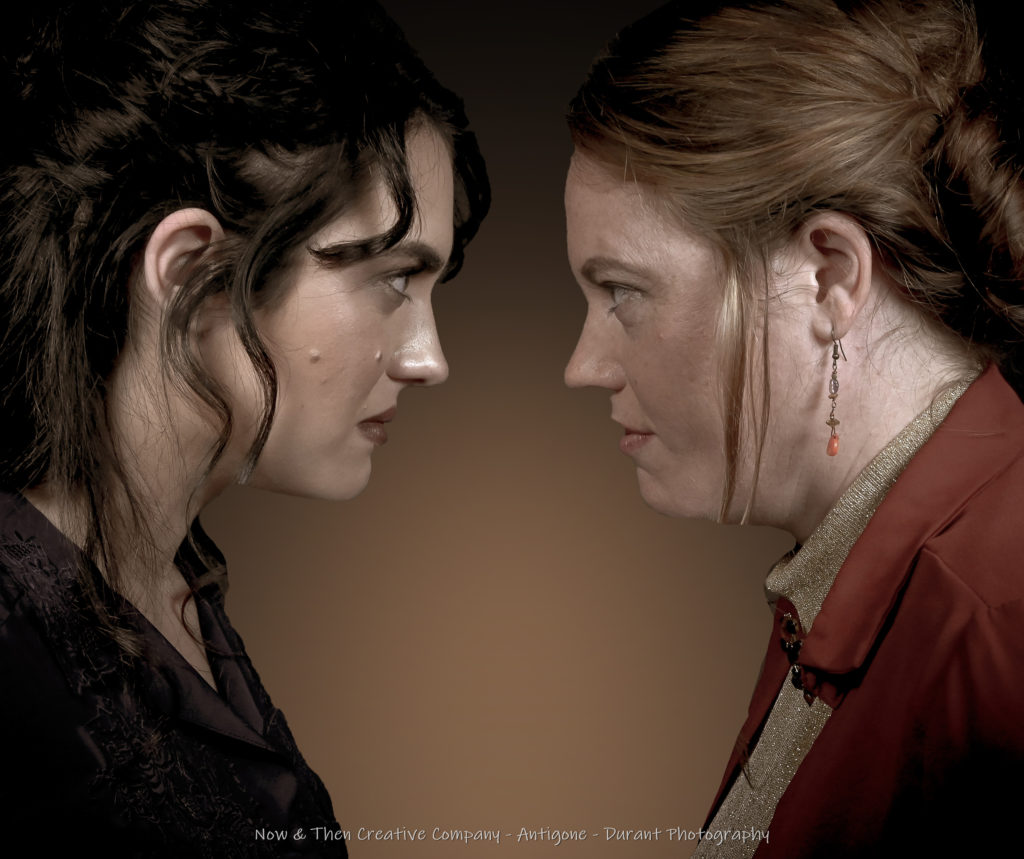 How do we define “loyalty?”

When confronted by others whose viewpoints we find toxic or offensive, just how important is steadfast resolve to our own values? Are there prices for “being right” that are too high to pay, and if so, where is that threshold? At what point does fidelity to our responsibilities to God and country mutate into obstinate, self-serving pride?

These questions, which haunt us in 2019 America form the spine of a story first told nearly 2,500 years ago in Sophocles’ Antigone, and this shockingly contemporary work is being told anew in Now and Then Creative Company’s final show of their second season, directed by Cody Goulder.

While the plot of Antigone and the ending of the tale won’t be a surprise to most (provided they didn’t sleep through sophomore-year English class, anyway), Now and Then’s staging finds new angles of attack on the Sophocles classic primarily through two conceits. The first is by framing the narrative as a Victorian horror story. The second is the decision to tell the tale with an all-female cast of characters.

The effectiveness of these innovations varies. The ghost story elements utilize some creative staging and effects, and I can’t deny they produced a chill or two during the 90-minute runtime, but they also don’t cohere to the narrative in as satisfying a manner as you would hope. As the story reaches its inevitable, bloody conclusion, these ghostly interstitials pay off in some interesting ways, but the journey there often aims for “tantalizing” and instead lands on “confusing.” 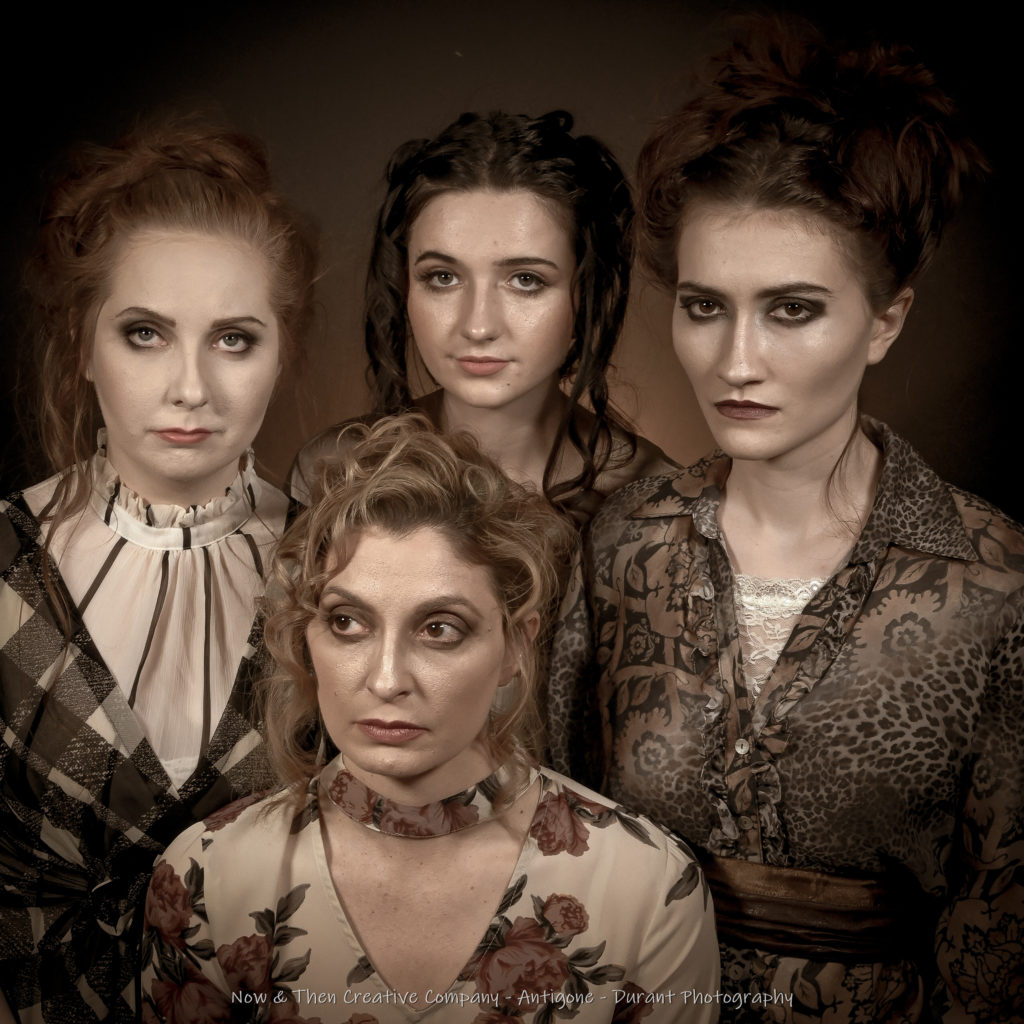 The female characters are more fulfilling, though. Now and Then’s production doesn’t just have an all-female cast; the characters themselves are all women. King Creon is now Queen Creon, etc. The impact of this is two-fold. When Antigone and her sister discuss the role of women in society and the limits on the power they can wield in a scene from Sophocles’ original text, the audience can’t help but recognize the embarrassing analogues between our modem world and Greece, circa 441 BC. At the same time,the clear implication is that installing women into power will not be a panacea, because as long as women are people, they will be as subject to hubris and folly as any King, and thus, as surely damned.

The specifics of the conflict between Antigone, here portrayed by Erika Lee Garcia, and Creon, played by Ivy Worsham, may not be immediately relatable what with all the talk of funeral rites, and “the gods below”, and city-state politics, but the thrust of their stubborn head-butting — an aunt and a niece having an ugly showdown over politics and patriotism — should be achingly familiar to anyone with a Facebook account.

Garcia holds her own, particularly in a late monologue where she both resigns herself to her fate, and also rails against both it and the complacent masses who have shuffled her towards it. But while the show is titled ‘Antigone,’ it is Worsham as Creon that carries the weight of this production on her back.

In early scenes, Worsham preens and poses, marching in front of the audience as she proclaims her edicts and attempts to rally their support. In these moments, it’s as if Worsham is channeling a certain head of state doing his best “Aragorn” from Return of the King, doing her best to rouse her people to *ahem* Make Thebes Great Again.

From there, however, Worsham’s Creon goes on to display, in equal measure, a newly-installed queen who sincerely believes the path to peace and prosperity for her people lies in lawful order, and a prideful tyrant who revels in righteous indignation when her personal whims aren’t satisfied. When she finally realizes the worst fate awaiting a character in Greek tragedy — wisdom that comes too late — her brokenness is nothing less than stirring.

Other standout performers include Cheyanne Ballou, who makes some fearless choices and squeezes real humor and mirth out of the ancient, tragic poetry in no less than three roles and Tess Jenkins, the put-upon wife of Creon whose support of, and faith in, her wife visibly erodes and crumbles before us as her ever-present smile grows less and less genuine.

Now and Then’s Antigone isn’t easy to find. It’s in the school you’ll be tempted to motor past as you Google Maps your way in. As such, here is where I must be upfront and say that experiencing the show in a classroom-sized setting and with young performers embodying a variety of ages is reminiscent of a High School play. At times, this production’s reach exceeds its grasp.

That disclaimed, an opportunity to enjoy a live-theatre experience in an (at times) nearly-crushingly intimate space, embodied by passionate and energetic performers, bristling with potential and finding brave and contemporary perspectives on classic art should appeal to Now and Then Creative Company’s audience. 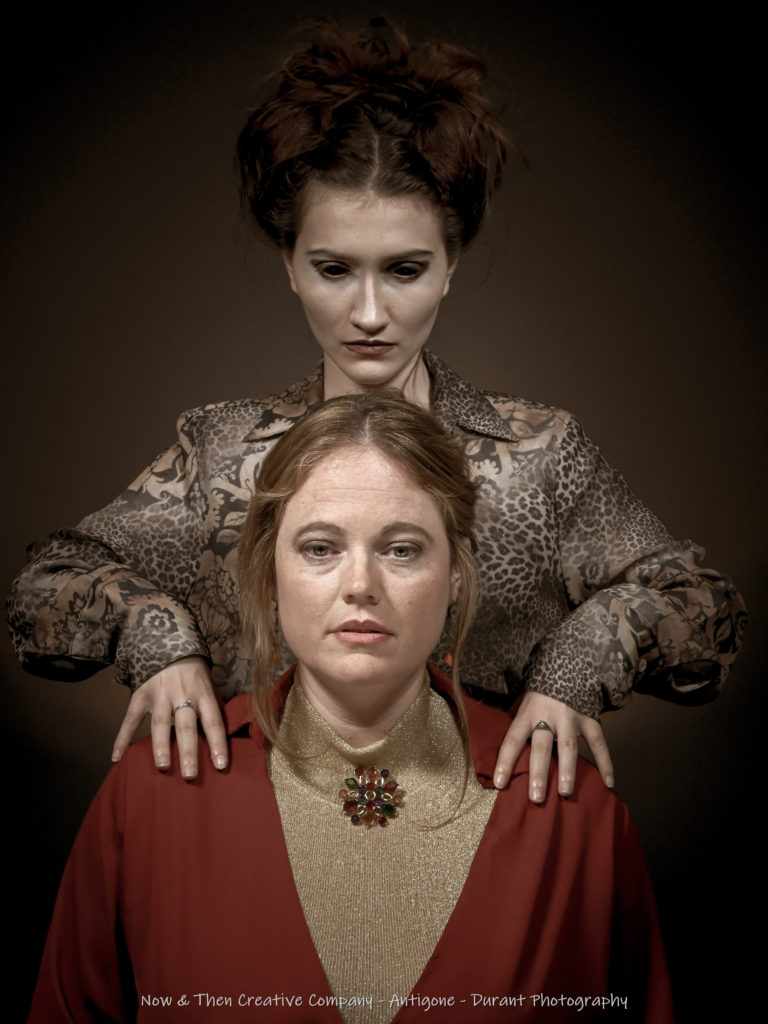