When people call America a melting pot, they’re usually referencing a vague, romanticized idea of diversity which is celebrated only in theory. However, if the melting pot analogy holds any water at all (pun intended), it is because of people like Ruben Wan.

If you looked at Ruben and tried to guess his background, you’d guess wrong. Ruben was born in Panama to first generation Chinese immigrants. His first language was Spanish, his second was Cantonese, and English came third.

Somewhere in Ruben’s trilingual development he found a fourth language; the language of music (cheesy, I know, but I needed a transition). This was the language Ruben fell the most deeply in love with. As a result, when he graduated high school, he did the thing everyone warns you not to do; he moved from Panama to LA to pursue a career in music.

While the beginning of Ruben’s life in the U.S. sounds romantic, the reality was slightly more, well, real. Ruben didn’t know a soul when he moved to LA. He spent his first few nights in America alone, clutching the toilet at Motel 6 because he got food poisoning from a dingy Chinese restaurant on Sunset Boulevard.

Recalling the rough first couple of days in America, Ruben says, “My first few days in LA were bad… I didn’t think of it as a bad omen, or a sign that I was making a mistake by coming to LA [laughs]. What I do consider a mistake was being inexperienced, eating food from a cheap restaurant, and declining help from my parents thinking I was all grown up.”

Despite the vomit-laden start, Ruben eventually forced the city to embrace him. He spent years studying his instrument and his skill became impossible to ignore. Ruben’s guitar work garnered attention on every corner of Instagram. His short, but mesmerizing videos were viewed and shared hundreds of thousands of times over. He amassed a large, dedicated following, complete with fans who cover his music.

Seeing people interpret his music is not something Ruben ever expected. “It makes me feel humbled, inspired, pressured, and grateful,” the Panamanian muses. “When I was composing music, I just wanted to entertain and express whatever I was feeling that day. It was never my intention to have people learn my compositions. The pressure to innovate gets higher every piece, but everytime I see someone covering a tune of mine, it moves me.”

If it were 1973, Ruben would have been handed a six figure recording contract by now, but, in 2019, things are a little more complicated. In order to capitalize on his success, Ruben has had to become a Renaissance man. His instagram videos have transformed from simple point-and-shoot displays of virtuosity into legitimate works of visual art. He’s gone from teaching individual Skype lessons to creating an entire online masterclass in partnership with PickUp Music.

“One of the big things I’ve learned,” Ruben said while discussing all the different roles he inhabits, “is that you gotta trust the pros in their respective fields. It’s good to have an understanding of the process, but never get cocky trying to do everything by yourself[…]you can easily get used to ‘good enough’ instead of striving for excellence.”

The landscape of music is one of uncertainty and variety, but Ruben wouldn’t change the way the modern music business operates. “[It’s] probably an unpopular opinion, but nothing comes to mind [to change]. Music is extremely accessible, there’s no lack of good music or good musicians.”

Success is sweet, but it doesn’t always breed contentment. “Making a living off of music is not an easy task and definitely not something I’d recommend.” Ruben states solemnly, “It has its rewarding moments, but overall music is more enjoyable on the other side–the listener’s side. Once you start pursuing music full time, responsibilities are added into the equation, creativity and talent gets questioned and that ultimately leads to self-doubt.” 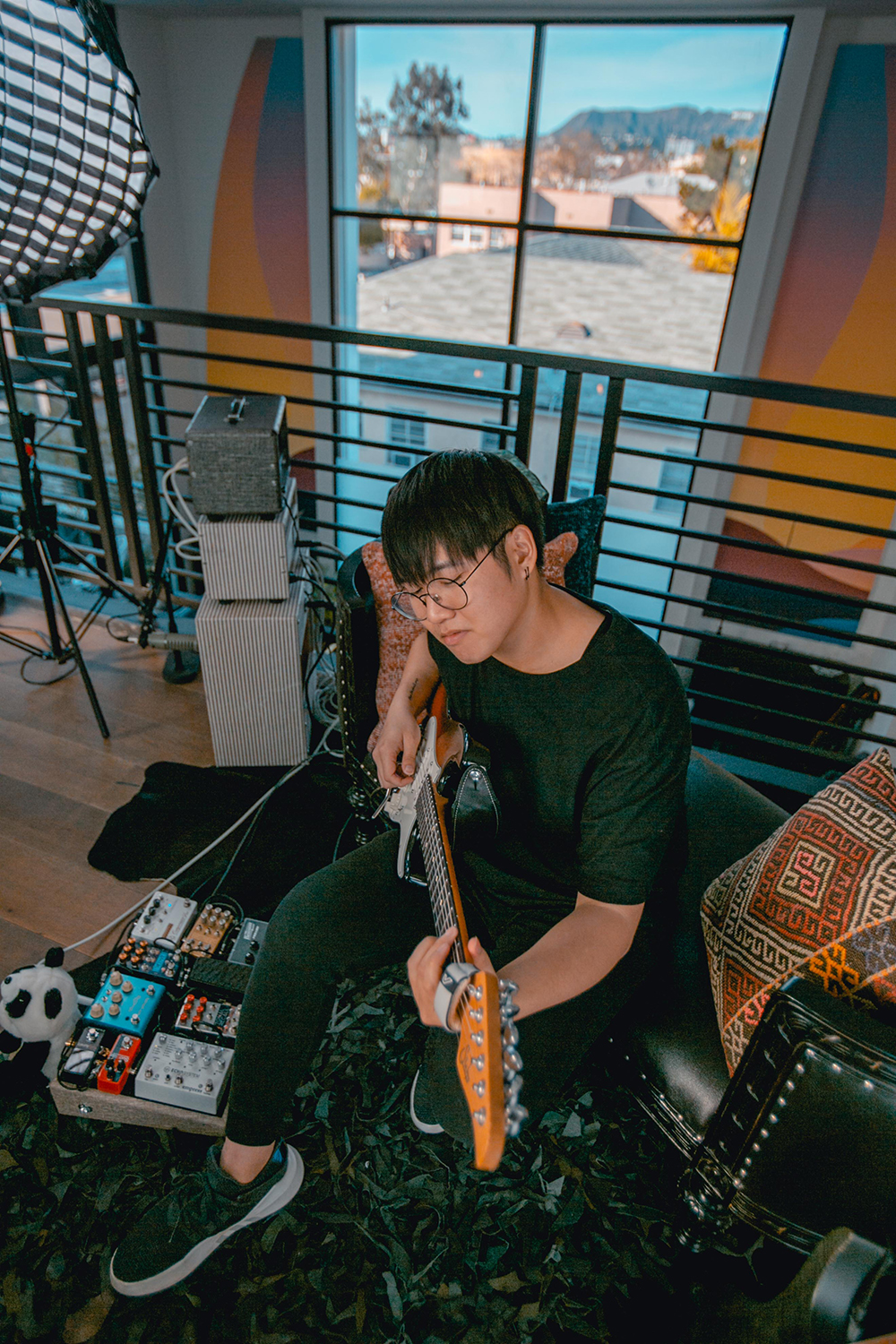 To hear Ruben describe the doubt he experiences as a musician is intriguing. On an intellectual level, I know everyone experiences self-doubt, no matter how successful they are. Nonetheless, Ruben’s path has been so decisive, at least on the surface. Here’s a man who loved music so much he chose to uproot his entire life–to live (at least for awhile) as an outsider in every sense of the word.

Additionally, Ruben’s music shows no signs of uncertainty. His production and guitar work are remarkably self-assured. While his music and lyrics often deal with themes of insecurity, loneliness, or homesickness, it always feels as if Ruben knows exactly what he is trying to say.

You could use a ton of hyphenated “self” adjectives to describe Ruben–self-assured, self-sufficient, self-motivated. But of course, his success required help, and Ruben wouldn’t be where he is without a host of musical partners. As stated above he collaborates frequently with PickUp Music, and he’s scheduled to have 6 original Song Squad features coming out over the next few months on PickUp’s various platforms. Ruben also endorses .strandberg guitars, and their beautiful, futuristic instruments are featured in many of his videos.

To follow Ruben’s latest projects, check him out on Instagram @rubenwan. He has two singles which are set to be released in the next few months. He also has several shows coming up in the LA area. A pair of shows as the shredding sideman for pop artist Riah on June 25 and 28th. Then a solo performance at the PickUp Music concert on June 27th.