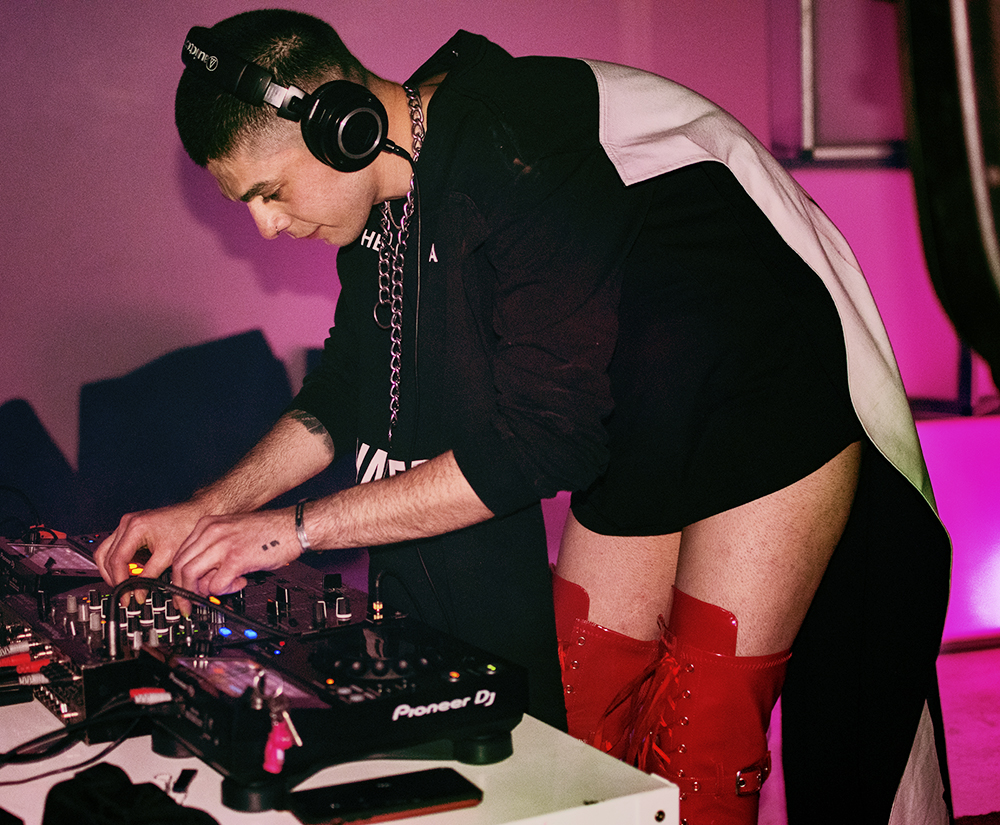 According to mainstream cultural historians, the last, important pulse which rang through the original “club kid” scene in New York City culminated with the death of Andre “Angel” Melendez, and the various exposés  which ran afterwards. Not unlike the “death” of hair metal which followed the media’s coverage, most subcultures have lost their sheen when the limelight finally falls on their lap.

In 2019, I see roles have been reversed: in western culture where we value social media on a separate-but-equal totem pole to daily news, I find myself scouring Instagram and Twitter for new things to do instead of the “big guys” of journalism. How else would I find last minute raves, parties, and events which push my buttons a little more than the average bar show? In the same way people would call each-other up and spread the word of an underground party, these social media platforms have been essential for finding the “true” community under the radar.

On my endless journey of searching Phoenix metro for the truly unsung, I came upon a flyer for the mononymous ¡Dale!. Marketed as an underground QTPOC (Queer Transgendered People Of Color) after-hours party featuring DJs, live performances, and two locally-prolific drag queens, the convincing point for me was the inclusion of headliner Quay Dash: a no-nonsense wordsmith rapper from The Bronx, NYC. ¡Dale! isn’t your run-of-the-mill, mainstream “queer” event. Instead of making it palpable for the lowest common heteronormative denominator, it separates itself by solely and consistently booking queer performers and artists of color. I would later learn from a speech by organizer and DJ La Siento, this would be the last edition of the event in its current form as he announced his move to New York.

As soon as I arrived an hour late (in unpredictable me fashion), I was greeted by a nondescript back-entrance hosting fashion-forward folk going in and out of the premises. The outside, which resembled the back-entrance to a workspace, gave way to a tactfully-decorated interior with all the average club fixings. Electronic glow-lights lined the drink station with thoughtful flowers framing the stage area and DJ booth. While there was no official lifted stage space, artists either performed behind the booth (adorned with a backdrop and square sculptures) or made their way through the crowd with entertaining intention. From the moment I walked in, my ears were filled with experimental electronic tunes from Omeed Norouzi, who mixed traditional trance elements with noise. The fog machine slapped me in the face as I grabbed a water and went outside to mingle with the guests. 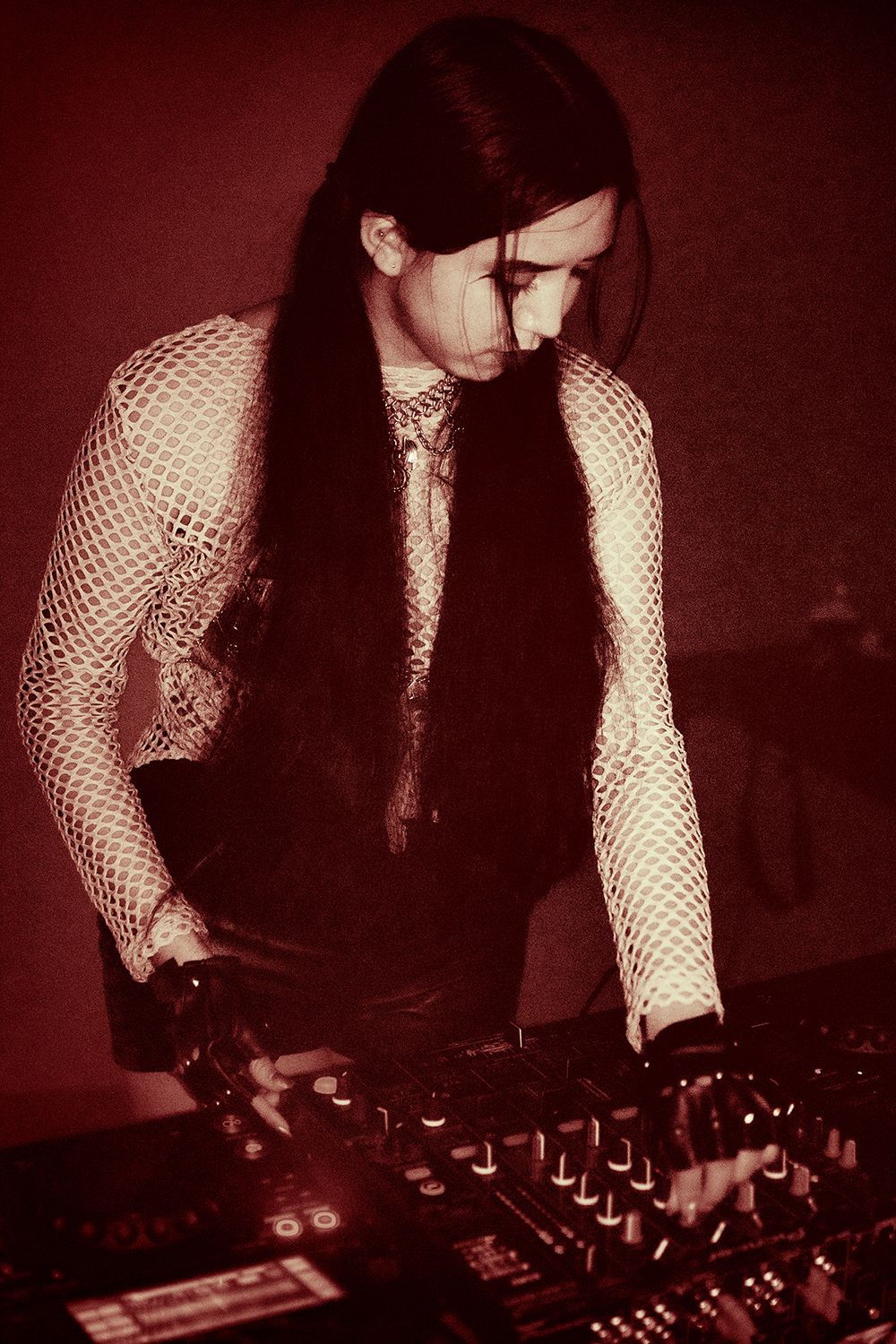 Although I am certainly involved in the Phoenix queer community, I couldn’t help but feel I left one stone unturned by not attending a ¡Dale! party in the past. Not only was I surrounded by unfamiliar faces, but I was taken aback by the chic attendees who surrounded me. Half the time, it’s a simple task for me to separate the audience and performers just based on style and panache. However, this evening reminded me I clearly didn’t know shit. The young-adult audience members dressed to the nines, feeling free to express themselves in the safe and socially conscientious environment. While some looked at my camera with unease and purpose, most were obliged to take a photo in their best outfits as soon as they struck up a conversation.

One of these conversations came with artist Gerbil, of Dem Cauldronz and Moxi Butterfli who were running a table. After talking to the duo and re-approaching the table, expressing my admiration for their wit, I was then told by Gerbil:

I gracefully obliged and understood what they meant; the night was not only a concert hybrid for the attendees, but a legitimate space for folks representative of a society who rejects the truest forms of expression. I expected slight distrust from the start, especially in an underground environment where organizers have to make sure they are in avoidance of breaking the law (loudly) and providing a safe space for those who might not normally have that. I later found out this same individual would be playing an electric performance in-between the other features.

While there was a last minute line-up change which introduced DJs Shocksite and bbyrush in place of 5hady Bby, the show went on with the aforementioned La Siento, Prototony, Crushmeharder, Dani Isai, and Omeed Norouzi carrying the vibes throughout the night. Each of these producers and DJs would showcase a multitude of experimental material, not normally heard in typical clubs. ¡Dale! was also a reminder of my own queer roots, and where the origin of true dance music hailed from. Similar to the historical “club kids” phenomenon which birthed a platitude of nightlife celebrities, this event represented the next generation of socially active folk who don’t give two fucks about the naysayers which have condemned them.

One of the first drag performers I caught up with on and off the stage was Twixxx, who first adorned an outfit reminiscent of legendary Ru-Paul’s “drag race” jumpsuit featured in season 1 and continually in the promos, while her second outfit set her up to be a modern flapper Halle Berry would kill over. After pleasantries were exchanged, I egged her on to learn more about the ingredients of what truly makes Twixxx:

“I started drag about a year ago and didn’t really have a clear vision for my drag since I didn’t have many black queens to look up to in the Phoenix area,” said Twixxx. “I would categorize my drag as a mix of glamour and humor; when I’m on stage, I love making people laugh and creating a fun atmosphere,” she continued.

In regards to a question of how her performance went, Twixxx confirmed nothing goes as planned, but felt her number was perfect for this type of event: “I hope to be a source of representation for queens like me and people who want to express themselves.” 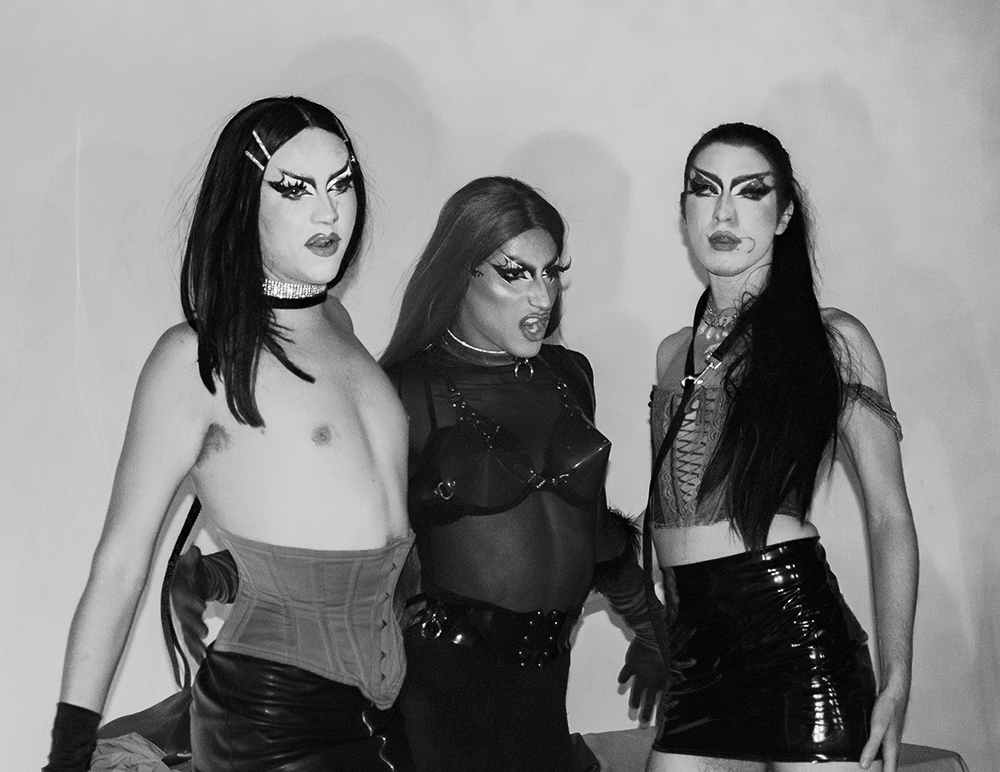 The live music portion consisting of VIL and Dem Cauldronz took off in-between the DJ sets, and while I unfortunately missed VIL in the heat of the moment, Dem Cauldronz gave me enough to work with as an audience member. With sheer calculation in their eyes and stage-anger, Dem Cauldronz performed a slew of half-screamed, part-rapped, half-sung electronic tracks carrying elements reminiscent of “witch-house,” and even a cover of Billie Holiday thrown in for good health.

Like a formerly captive Jaguar, Gerbil navigated the decor and plant life, not letting the audience deviate from her gazing eyes, as they shouted such mantras as, “don’t fuck with me, I’m sacred.” Early on, Dem Cauldronz utilized offbeat vocal effects to highlight the message and  encouraged listeners to embrace the parts of themselves they feel shame towards. From hearing their name around and knowing Gerbil from a distance, I later asked Gerbil about their experience in music and what lead them to the creation of Dem Cauldronz:

“I started Dem Cauldronz because I wanted to do something different and express myself physically,” said Gerbil. “I released my first EP [under Dem Cauldronz] on Halloween of 2018. It’s been about a year and half. In every project I’ve done, I’ve always had something in my hands. I’ve played banjo, accordion, and always something heavy; what gets me so excited about this project is using my body as the instrument and expressing myself more physically.”

Gerbil also elaborated on the existence of their “5-piece, banjo-fronted freak-folk band” they started in 2014, and the eventual creation of their current project:

“I’m from California, originally, but have been back and forth to LA, the Bay, Phoenix and America. I spent a lot of my teen years touring with [Trash Mullet]; I went on my first tour when I was 16, planned it by myself, and everything was DIY,” Gerbil continued.

When asked about their involvement in the QTPOC art scene and their thoughts, Gerbil reiterated their thankfulness for the event organizers who make it possible:

“I am QTPOC, and in Phoenix, I feel I’m a really big representation of the community and what it means to be QTPOC. It is really hard to exist here [as a queer person of color], but having a community like Dale is empowering,” said Gerbil. “It’s amazing to be apart of a community, such as Häus of Polkadots, that consistently book me and other queer artists of color.” 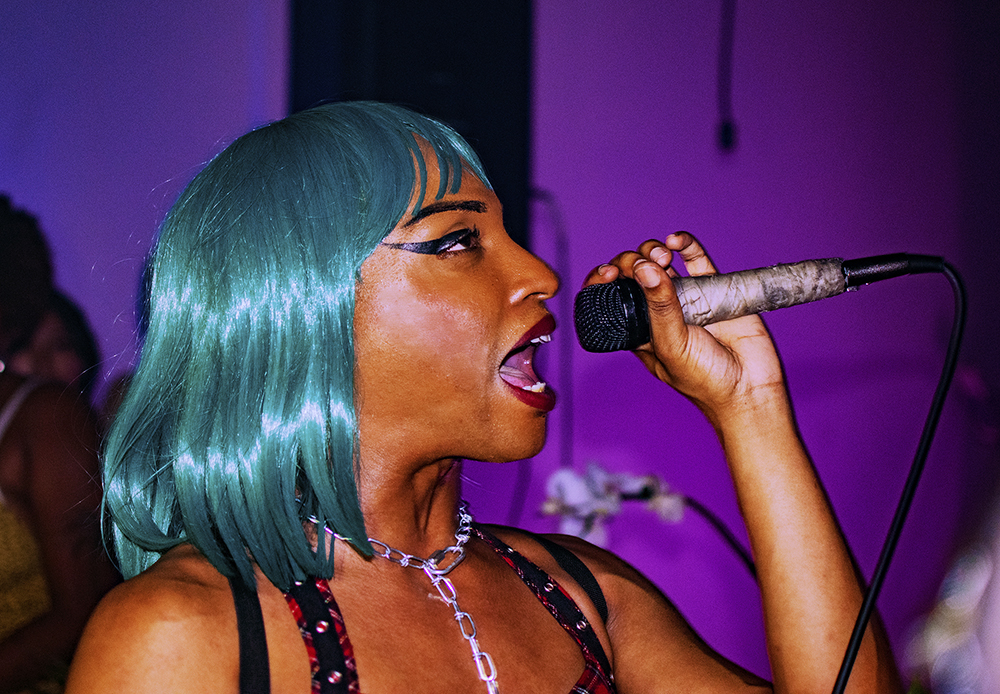 After a short tease earlier in the night, NYC-based queer rapper Quay Dash took the performance space, getting up close-and-personal with the crowd. Spitting her lyrics with incredible fluidity and clarity, Quay Dash fills the hole other defunct indie rappers have left in my musical heart. In a world of Soundcloud clout and mumbles, this rapper made no effort to appear anything else than what she truly is: a queen (like her single “Queen of This Shit”), but a benevolent monarch of the people.

While she left little time for chitchat, Quay Dash performed her 2017 Transphobic EP in it’s entirety to audience members shouting back almost every lyric. Her New York attitude shined through as she worked through her set, interacting with the crowd through her tracks, and not bothered by the camera flashes constantly emanating from my camera and others. I don’t know how Quay Dash made her way to the gloomy deserts of Arizona, but it’s been a long time since I’ve caught a rapper who truly floored me in a live environment, and if one thing is clear, we do not deserve the unparalleled flow of Quay Dash. When asked for comment on her latest Arizona performance, Quay Dash expressed gratitude for her fans:

“I just want to thank my fans and supporters that came out to see me live. Thank you!”

After a few more DJ sets and intertwined audience shenanigans, the night ended as ceremoniously as it began when the organizers closed-up shop and the extravagantly-dressed attendees filed to their cars. While this may be the last ¡Dale! event in Arizona, there is not a doubt in my mind that La Siento will find success with their artistic and organizational abilities elsewhere. Knowing Micah from The Häus of Polkadots and the other queer individuals who sacrifice their time to dedicate their events to unsung minorities, this certainly won’t be the last QTPOC-focused event the Valley sees. 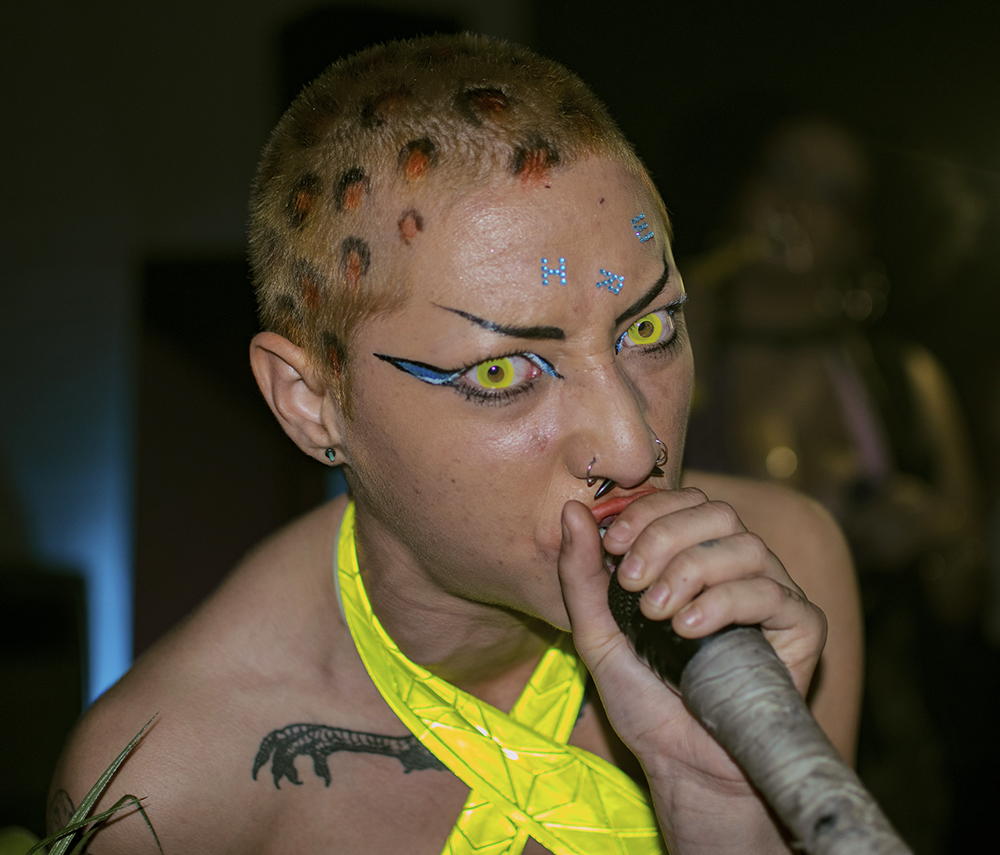