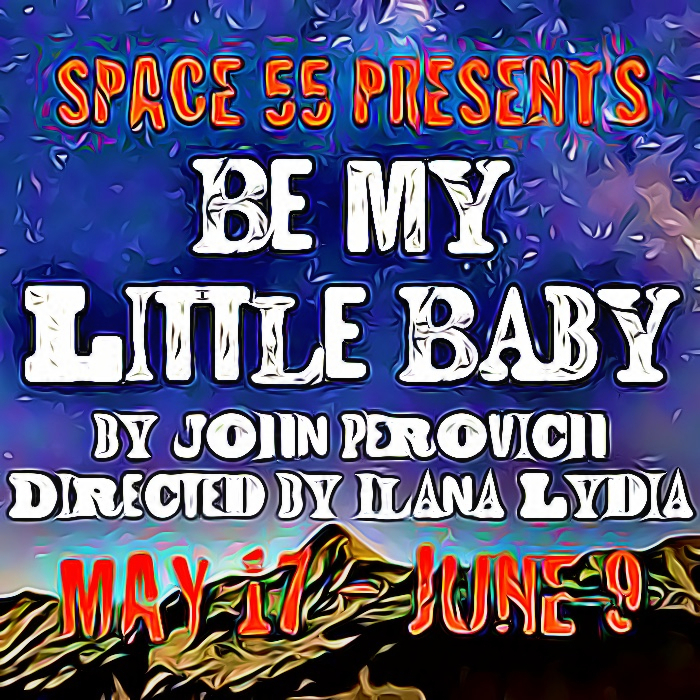 The deserts of Arizona are a place of mystery and myth.

The environs are harsh, uncompromising, and teeming with menace. However, even amidst the unyielding cruelty, there is beauty, at times, even peace. The winds whisper of both dreams unimagined and tragedies untold. Such is the backdrop and setting of Space 55‘s newest offering, be my little baby, an original production by local playwright John Perovich with direction by Ilana Lydia.

Set in Cottonwood at some timelessly contemporary point, Perovich’s story centers on Johnny, a young man of indeterminate age who is all but kept prisoner in his home. Living with an overprotective mother who homeschools him in, seemingly, whatever subjects strike her notion and fancy, and his older sister, Heather, who isn’t subjected to her mother’s suffocating attentions, and, as such, is free to attend high school, to have friends, to date… essentially to have the kind of typical experiences Johnny is quarantined away from.

It’s understandable that being shut away would be damaging to anyone’s mental well-being, and that would naturally pair in perfect agony with the growing desire for freedom and adventure in a young person. As such, it’s no surprise that Johnny is a little… off. And since we’re on this ride with Johnny, primarily seeing the action through his eyes, it also follows that what we see is going to be a little… off.

Put another way, be my little baby is a weird show. The playbill promises cowboys, astral projection, and pancakes and, though I generally try to avoid spoilers, let me assure you that all three are indeed in store for you. Time is less than constant. There is an actor who never speaks or is addressed by any of the other characters, which actually follows logically, because he’s, you know, the Moon.

If you are the kind who prefers a strictly literal narrative, or strictly naturalistic performances, then Space 55’s offering is going to prove tricky. Lydia’s direction and Perovich’s text revel in the stylistic, the abstract, at times, even the uncomfortable. If, however, the offbeat and the atypical excite you, this could just be the Wild-West-by-way-of-David-Lynch kind of evening you’re looking for.

This unique aesthetic plays a little havoc with the characters, making them often seem nebulous or ephemeral. Conversations play out like a fever dream where effect is often abandoned by cause, and the players motivations morph and twist in a Lovecraftian resistance to convention. It’s a disconcerting experience which serves to allow the audience a peek at Johnny’s breathless oppression, at Mama’s nameless dread, and Heather’s exasperated yearning for normalcy.

If the highest aspiration of art is to make the observer feel, then Space 55’s production allows the audience to feel with this family does, even when what the family feels most is pain and desperation.

It’s not all misery though, for as sure as there are those who suffer, there will always be those who delight in that suffering, and in Heather’s boyfriend Bobby, embodied by prolific performer Matt Clark, Perovich and Lydia have created a terrifying devil.

If our long-suffering family struggles to determine just why life seems so often cruel or confusing, Bobby hums with the electricity of someone who has no interest in asking why, and instead is gleefully content to swim with the current. Like Robert Mitchum’s Max Cady in Cape Fear or Hannibal Lecter, Clarke’s Bobby is charmingly malicious and frighteningly gracious. He’s a demon with a crocodile grin and a twinkle in his eye that suggests that the reason for his inhumanly good humor is that he’s delighting in imagining the moment when he lets his smile drop and finally indulges in his real appetites.

The menace that Bobby brings and the confinement that Johnny feels are both emphasized by the intimate real estate at Space 55 and the production’s use of that space in staging the action. The events of the show aren’t confined simply to the space in front of the audience, as characters enter, exit, and argue up and down the aisles of the theater. We are made part of the family — like it or not — which allows us to revel with Johnny when he discovers new ways to transcend the restrictions and limitations of his cloistered life.

Not every question is answered at the end of be my little baby, and some of the questions that remain are big ones. In that, we are allowed to join Johnny on his journey because sometimes growing up means making due with the answers you do get, and making peace with the questions left behind. For some, that’s going to be unsatisfying. For others, Space 55’s production is going to give you plenty to chew on and stew over later.

be my little baby runs through June 9 at Space 55.  Tickets can be purchased here.