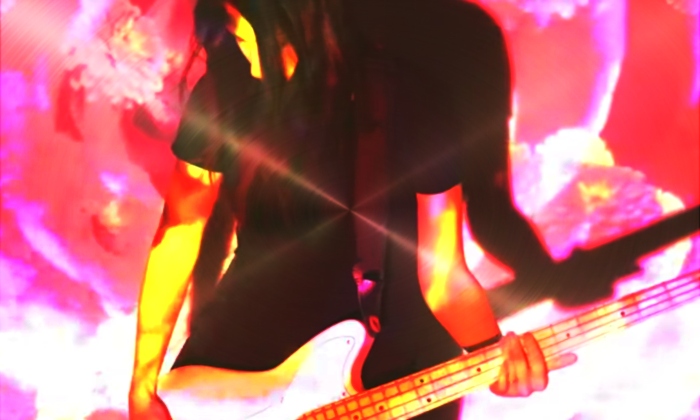 This new track from Blushing has the right blend of gritty shoegaze and airy dream-pop vocals. The Austin act released a slick 7″ last October on pink opaque vinyl, but “Dream Merchants” marks the first single of the new year.

The music video for “Violent Water” is so good it almost upstages the single itself, but not quite. Once the energy (and guitars) pick up, you’ll be sold on the garage rock grit of Sonia Barcelona. The Vegas-raised alt-rock Barcelona has her hometown crew to thank for helping to bring the single and its accompanying music video, inspired by the work of Georges Melies, to life. Funds for the effort were raised through Kickstarter. We win when communities come together to help artists make cool things.

This post-punk act from Athens [GA] have a sullen sound I dig and a new album, Eat the Shadow, lurking on the horizon so, basically, good times for me. “Disjecta” combines blurry and aggressively edged vocals with somber slacker rock. What’s not to like? Check out the music video for “Disjecta” and keep watch for Eat the Shadow from Grand Vapids in July.

doubleVee combines the talents of Allan and Barb Vest: a musical duo brought together in 2012 who later married in 2015 and released their debut album two short years later. Now, doubleVee is ready to follow-up 2017’s The Moonlit Fables of Jack the Rider with a brand new EP chalk full of vibrant indie pop. Songs for Birds and Bats came out in April and the duo released this stellar animated music video for the single, “Map the Channels” which appears on that release. Enjoy the video and then dive right into the EP.

Get ready because The Band Royale goes big. Big guitars, big drums, big vocals. Basically, they pack a lot of power into their sound with just enough restraint to tip the scales from hard rock to alt-rock… but I dig the borderlands this sound occupies. Reminds me a little of Tool in that way but, you know, still relevant to modern listeners. Check out The Band Royale, currently based out of Chicago, and their new single, “Loose Lips Sink Ships”.

This track marks the first single off of Gorky’s 3rd album, Mathemagician, which came out last month. This Show Low band has a bar room rock sound that’s infectiously catchy enough to earworm its way into the minds of drinking show attendees. And, bonus, the trippy music video for “Action Pants” was directed by Jesse Valencia, lead singer/guitarist for Gorky, who also happens to be a student at the David Lynch Graduate School of Cinematic Arts. How cool is that?

The Nashville-based musician known as NIGHTMØDE (aka Matt Kass) creates psych-tinged indie-electro soundscapes and then partners with vocalists to complete the sonic vision. For “Penthouse Refugees” he took it a step farther and worked with Darling Lucifer Productions to create an equally trippy visual experience to accompany the single. Check out “Penthouse Refugees” from NIGHTMØDE.