Sunday at Noon | All photos by Logan Lowrey-Rasmussen

Since I reviewed Sunday At Noon’s Beat Up & Bitter album, I’ve been trying my damnedest to explore even a fraction of the Phoenix rock community outside my average drag, indie, and punk circuit. I always seem to fall victim to my taste-related loops, but on Thursday, April 11, The Rebel Lounge introduced me to a fresh community of hard-working artists and dedicated concentrations of fans supporting the alt-rock they love. Presented by Atlas Artist Group, Sunday At Noon kicked off their “Bring the Thunder” joint-tour with Vegas-based Almost Awake, Arlington from Southern California, and Queen Creek hometown heroes, HeadStrum (in place of All New Hopes).

It had been more than six months since I covered a show at The Rebel Lounge, and while the general vibes were the same as any DIY venue during the pre-show, the first performance by opener HeadStrum proved management took measures to improve the sound and lighting for folks with OCD like me. In what was usually a pain in the ass to hear any audible lyrics and vocals at local venues, The Rebel Lounge nipped the problem in the bud by presenting one of the vocally cleanest shows in Arizona I have ever heard.

With every band, there was never a moment when I felt the sound levels were off. As someone who is also familiar with photographing local shows in dark venues not suited for my older Nikon, I am sure the venue and manager of Sunday At Noon also saw the slight panic in my eyes when I was informed I couldn’t use flash. Kudos number two also goes to the venue for getting the lighting just right for some unexpected sans-flash photography. 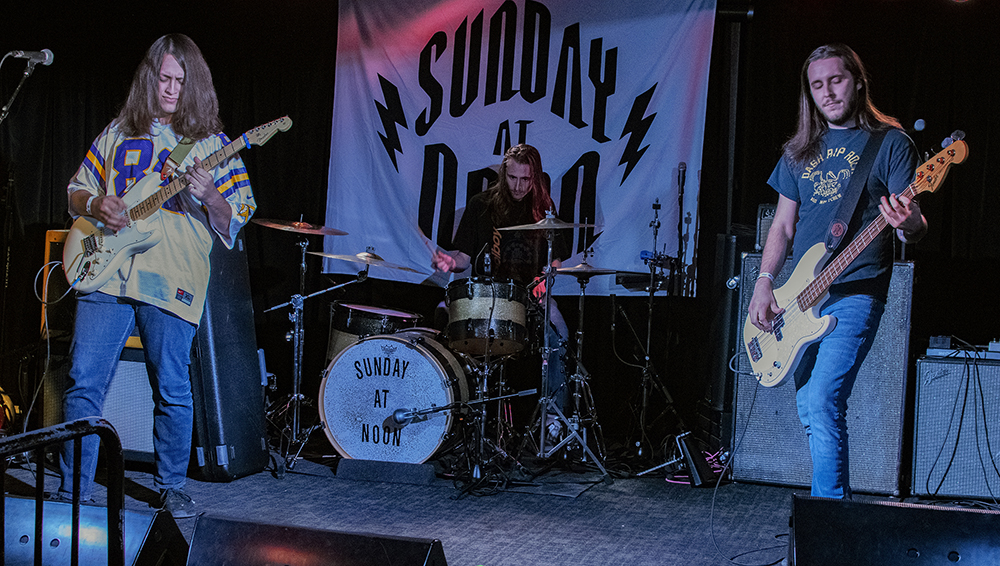 HeadStrum casually entered the stage, with lead guitar and singer Alex Hedstrom clad in a football jersey. In both fashion and music, the band exuded pure “guy-next-door” vibes with the musical punch of Ike Turner. Much of their set consisted of alt-rock melodic combinations with a distinct midwest country-rock vocals that took me back to my childhood when my dad would lambast the family car-ride with a mix of early Hip-Hop and unabashed adult blues rock.

The three-person ensemble consisting of Chet Powell on drums, Sam Lehtine on bass, and Alex on vocals gave way to a clean, mature sound with the right amount of rock’n’roll charm. The blues elements found in their vocals blended well with the gritty, alt-rock riffs and grungy elements, and reminded me of a young Vanilla Fudge in their hey-day. I later learned Headstrum had already made a splash in their earlier years, placing second in Alice Cooper’s Proof is in the Pudding competition in both 2012 and 2013. While their proof as adept instrumentalists proved their past and represented their 2016 Without Love EP well, their lack of ego and grandstanding let their music speak for itself. HeadStrum taught me that even a song with the unofficial title of “Doodley Doo” can still have serious resonance.

Sure!
Little Too lazy
I Killed Robert Johnson
Somebody to Love (Original)
Doodley Doo
Burn Me Out
Texas Flood
You Wouldn’t Be Shit 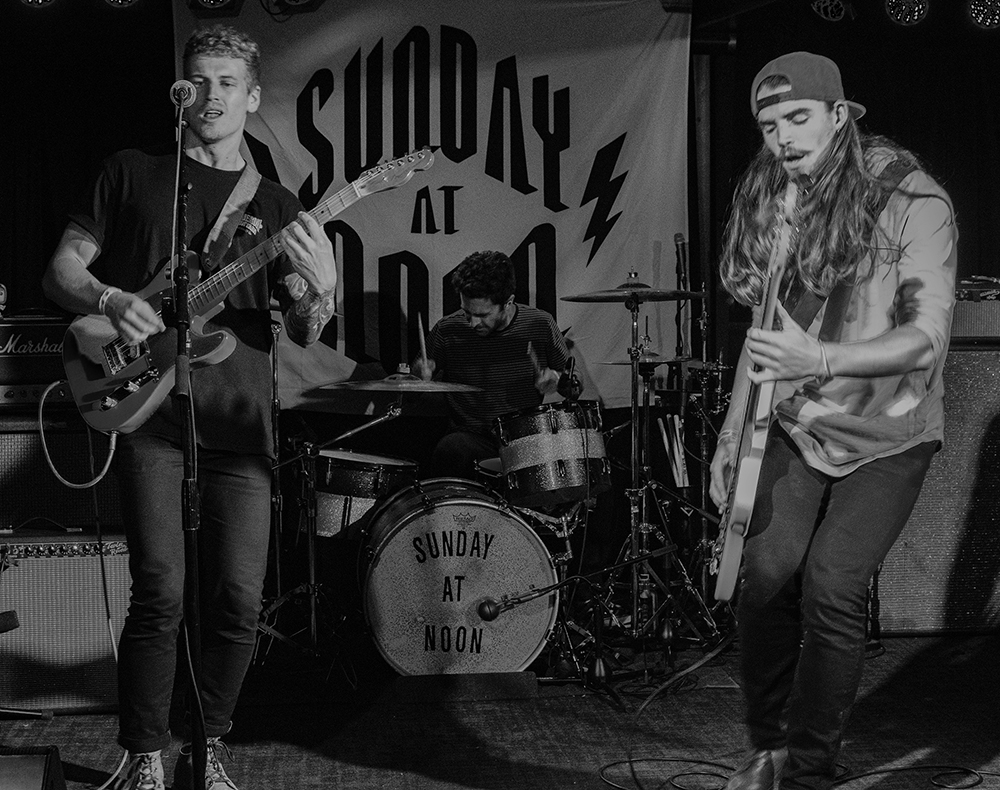 Next on the line-up featured the acerbic three-member Southern Cali-bred Arlington pumped with adrenaline and stark personalities. Usually in a band’s line-up, you won’t be surprised to find members in somewhat similar dress performing in a conducive manner; birds of a feather flock together as the old saying goes. But in the Arlington ensemble, you’ll find the mild-mannered guitar and vocalist Tyler Benko contrast the hyperactive bassist Channing Peake who can’t seem to keep his feet still.

Peake is certainly not the bassist who would let himself be relegated to one side of the stage, and would frequently get close to the crowd like the band’s “hype man.” While Tyler and Channing could be foils to each-other’s style, drummer Grant Whitson brings the alt-rock, slightly ska sound together. Their sunny sound and biting lyricism give way to the smooth, rasp of Benko, as if Nick Jonas had a raspier, heavier tone, and was not Nick Jonas. Their guitar and bass melodies frequently float between a tango and something (pre-incarcerated) Phil Spector could have cooked up, giving it the expert sound disguised in youth-rock pastiche. Contrasting Headstrum’s bluesy delivery, Arlington makes their mark as fast, conflicting, yet completely sure of who they want to be. 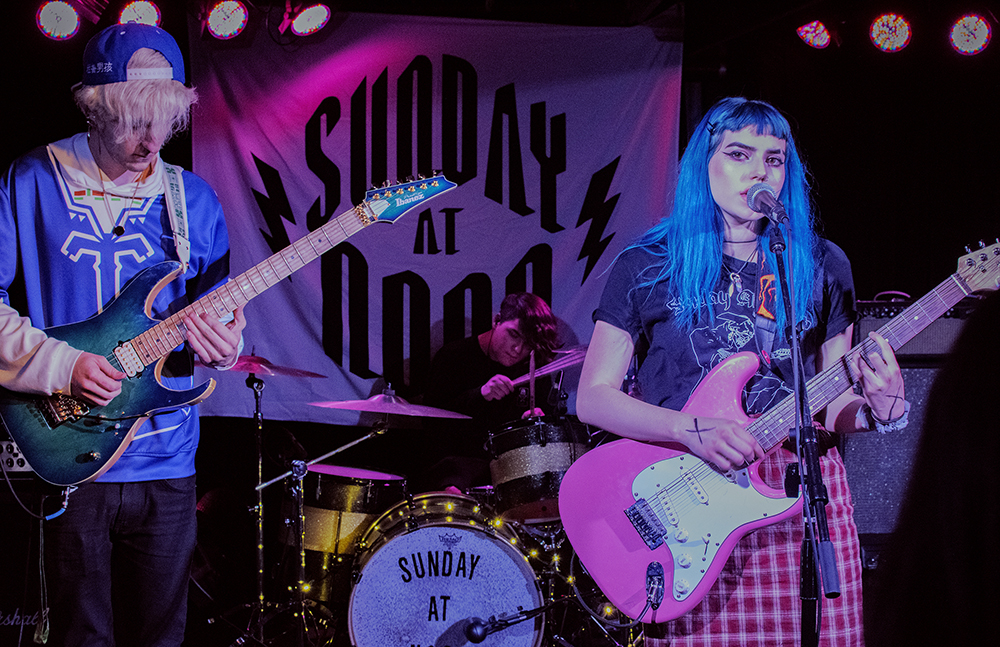 As Almost Awake entered the stage after Arlington, my brain was transported back to 2010 when the life and times of Logan were simpler, MySpace was on its way out, and alt-rock was making its final bow before combining itself with EDM, and later, folk music. In the midst of this storm emerges Las Vegas band and Sunday At Noon’s touring-mates, Almost Awake. Mononymous vocalist Vick donned blue-hair and stark foundation as she walked on stage with guitarist Grady Jones, Bryson Drace, and Tommy Cochran on drums.

Unlike the more traditional forms of rock in the last two acts, much of Almost Awake’s set harkened back to the hey-day of alt-rock and pop punk, but given the 2019 treatment and a clean sound. Instead of the shouted, untrained vocals of years past, Vick presented a restrained, practiced soprano with enough depth to where belting is unnecessary. The arrangements were clean and heavy, but never overtook the subtle power of their blue-haired vocalist’s delivery. There’s no question as to why Sunday At Noon and Almost Awake partnered up for this tour — the entire trio exuded a level of professionalism in their sound and know exactly where their limits are, and how to break past them. Almost Awake isn’t your mom’s alt-rock, but has all the pageantry of the past reconciled with the clean, polished 2019 aesthetic. 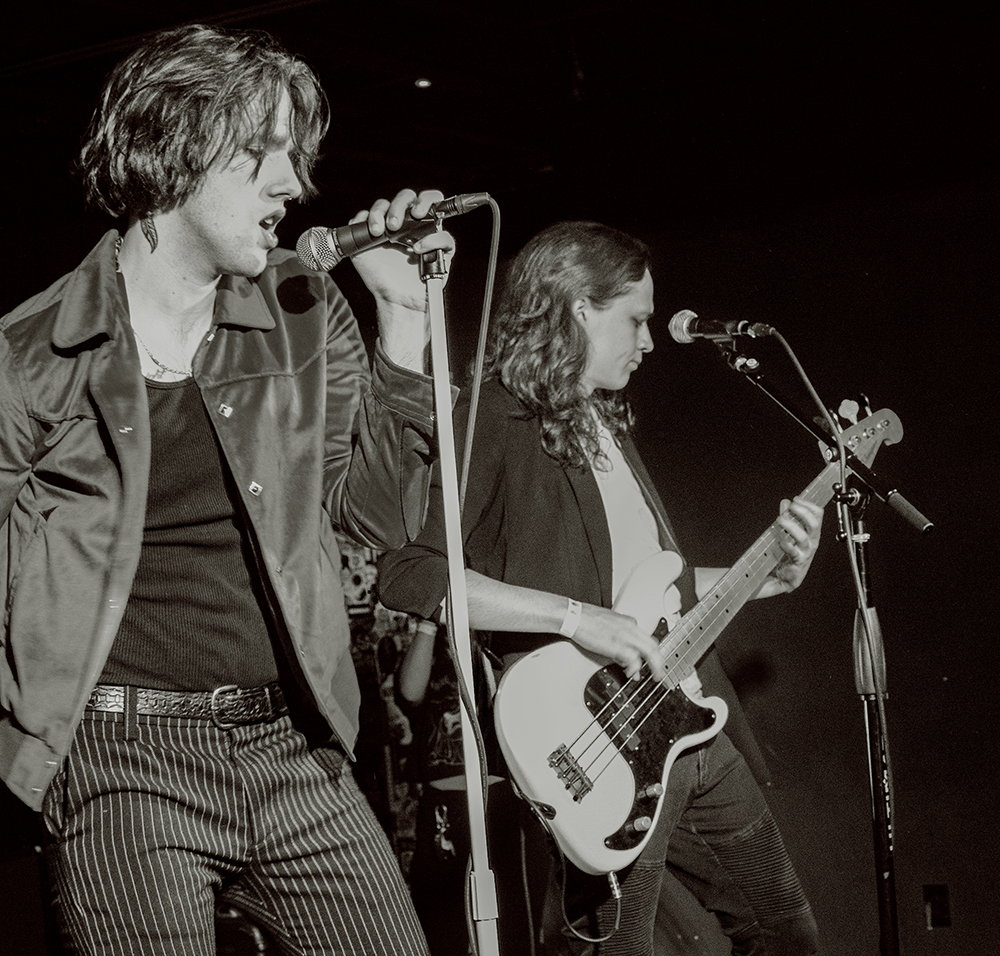 Before I knew it, Sunday At Noon began their headlining slot and proved why I enjoyed Beat Up & Bitter album so much, contrary to my normal listening habits. While I had the pleasure of seeing Nate Vanderpol and Nick Torri play in DS1 at Pub Rock a few months ago, it took me way longer than I would have liked to catch the Vanderpol brothers, Nick, and bassist Carl Gumpert in full-powered rock mode.

It was a bit surreal seeing my former classmate Nick on the stage shredding away — I remember being a 15 year-old freshly-out gay adolescent and annoying the crap out of him every lunch period at Williams Field High with my hyperactive and unhinged teenage ADHD behavior during our freshman year. It was a weird, juvenile time for all involved, and I feel proud to see one of my former classmates not only perform in a locally successful band, but seem to genuinely enjoy the material he was playing.

The set consisted of tracks both unreleased and fan-favorites, but also featured the strangely effective “choreography” of frontman Jack Vanderpol slithering in an outfit Freddie Mercury would be proud of. Like Arlington, Sunday At Noon were performance professionals in regard to their crowd interaction: none of the band skipped a beat or sung a bad note. Highlights include a new favorite track of mine (that begins with a B, but I can’t reveal its name) along with a track which featured prominent backup vocals from bassist Carl, and another track which featured brother and drummer Nate on lead. Compared to their studio album, the band’s material felt like it was almost tailored for the live stage and to get fans pumped. If this differed from any DIY show I’ve attended in the past few months, the crowd’s energy was at a relative high throughout the whole event. No arms were crossed, and even the stiffest folk like myself managed to loosen up a bit.

If there had to be any trademark word of the evening, “professional” would fit the bill. It was refreshing to see four acts who were completely serious about what they do , while still balancing out their own personality to get the crowd vibing. With no bum notes, no disgruntled fans, and a relaxed atmosphere, it made me feel unafraid of covering something new and refreshed in the process. I sincerely wish Sunday At Noon and Almost Awake the best as they begin their tour, and hope to catch locals HeadStrum and Californians Arlington when another Arizona show hits. 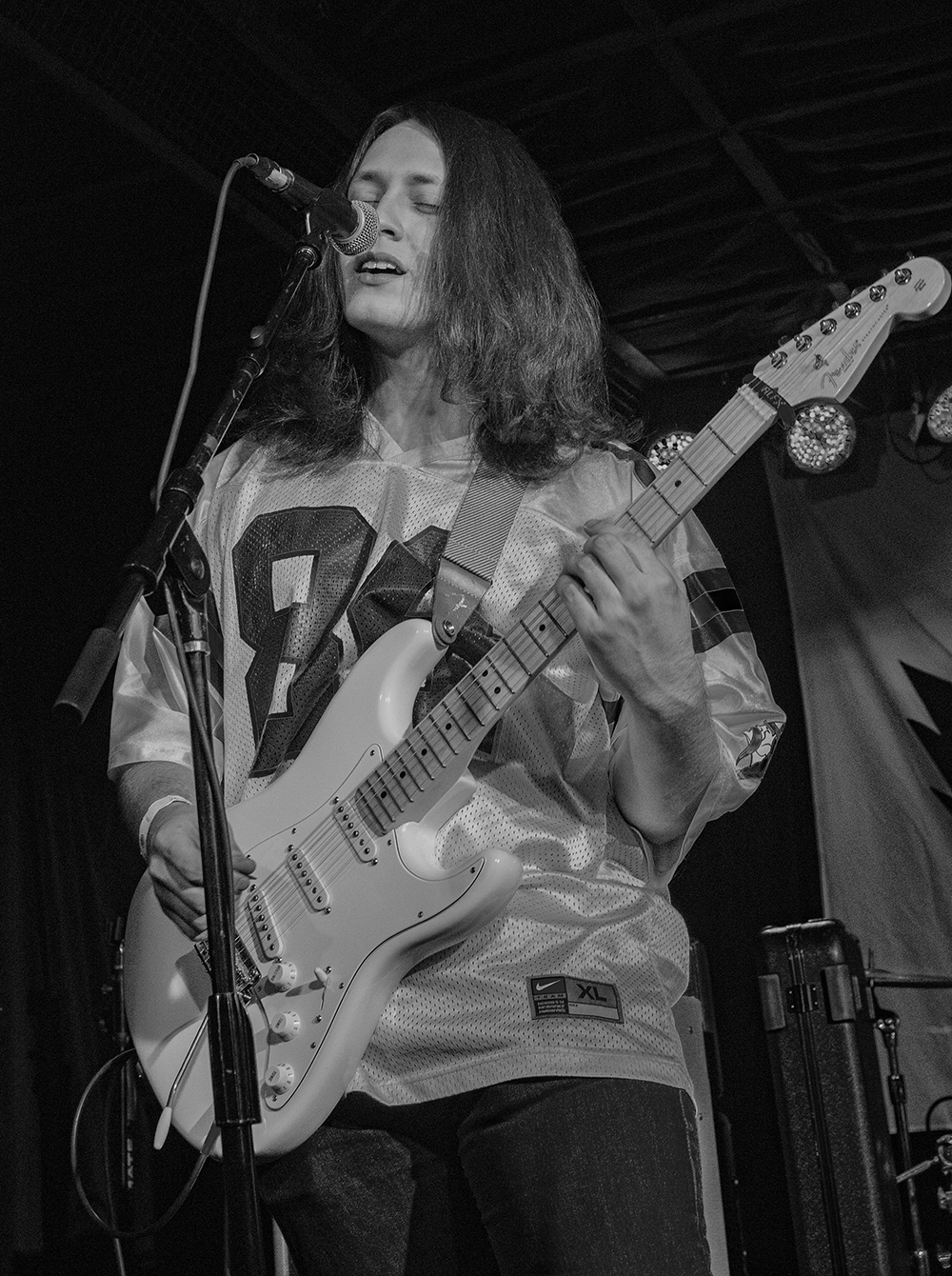 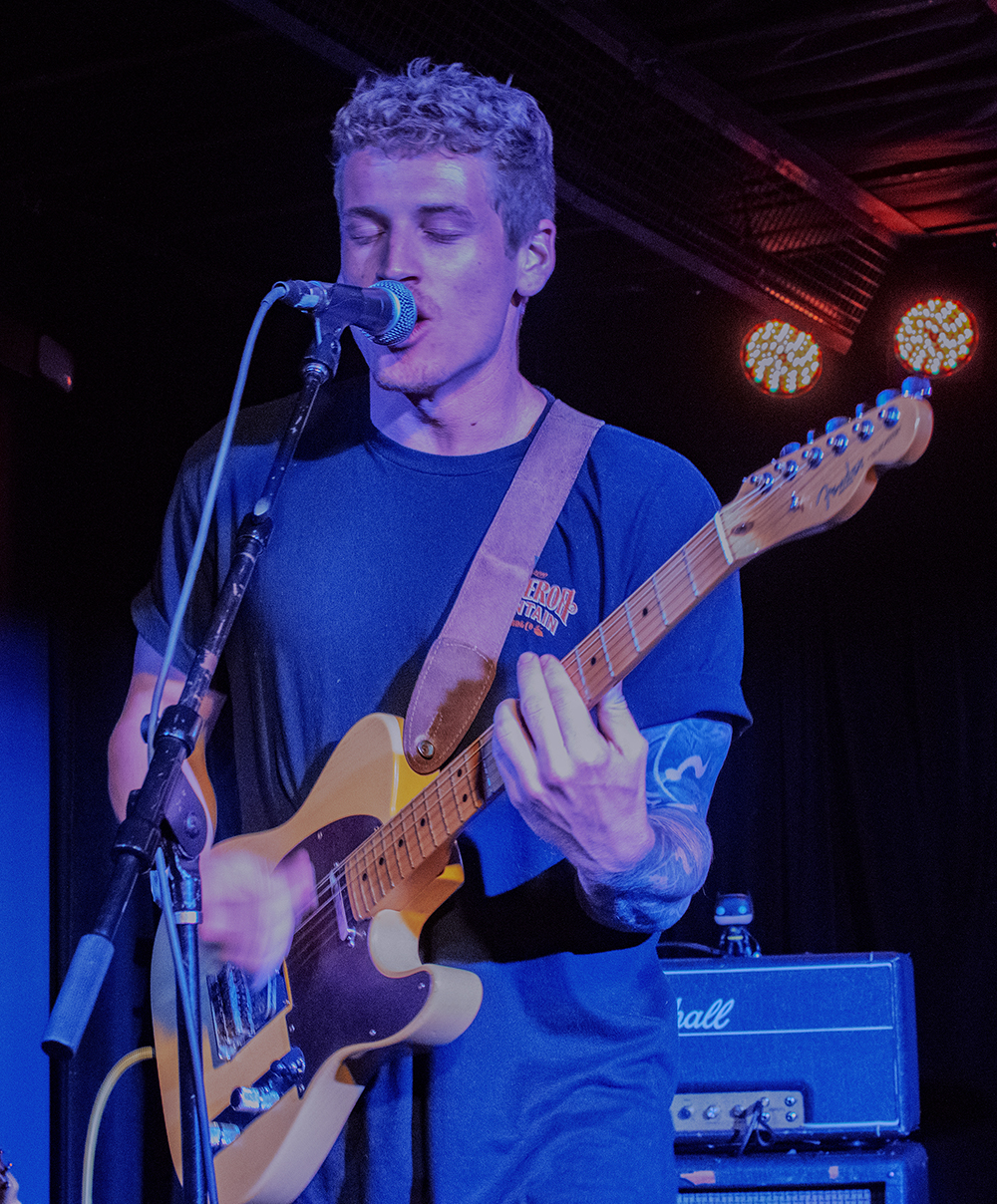 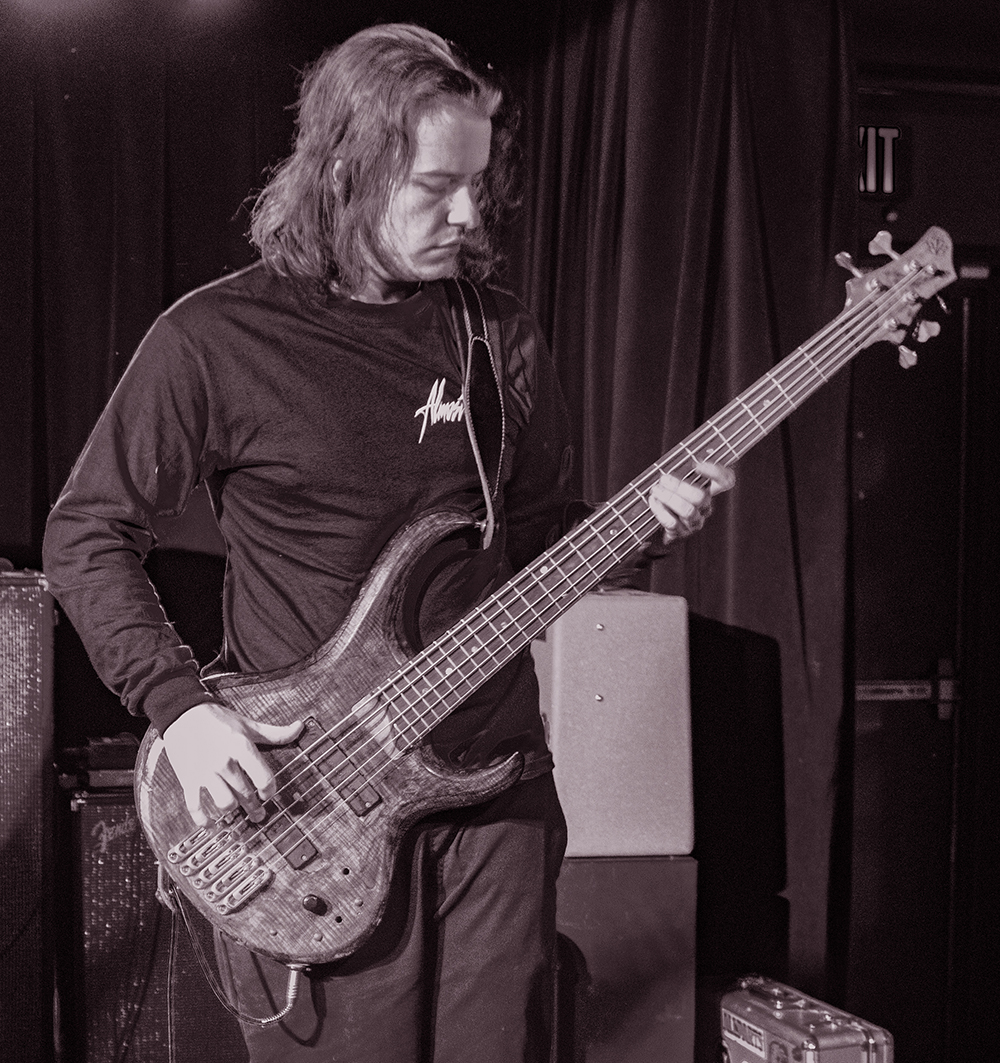 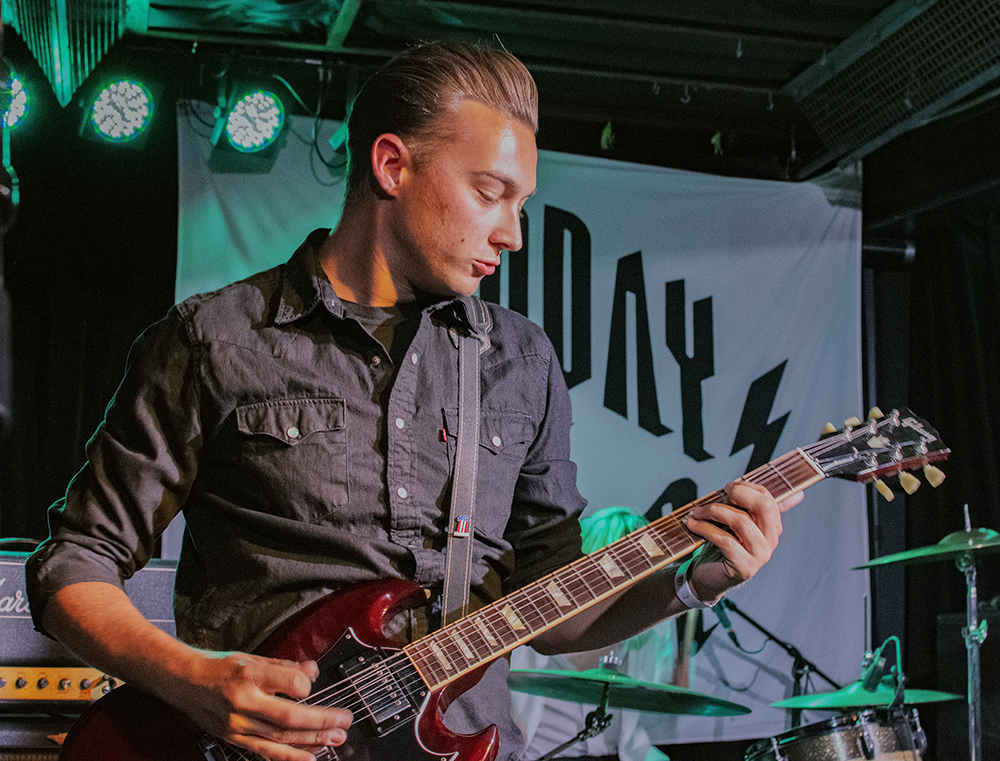 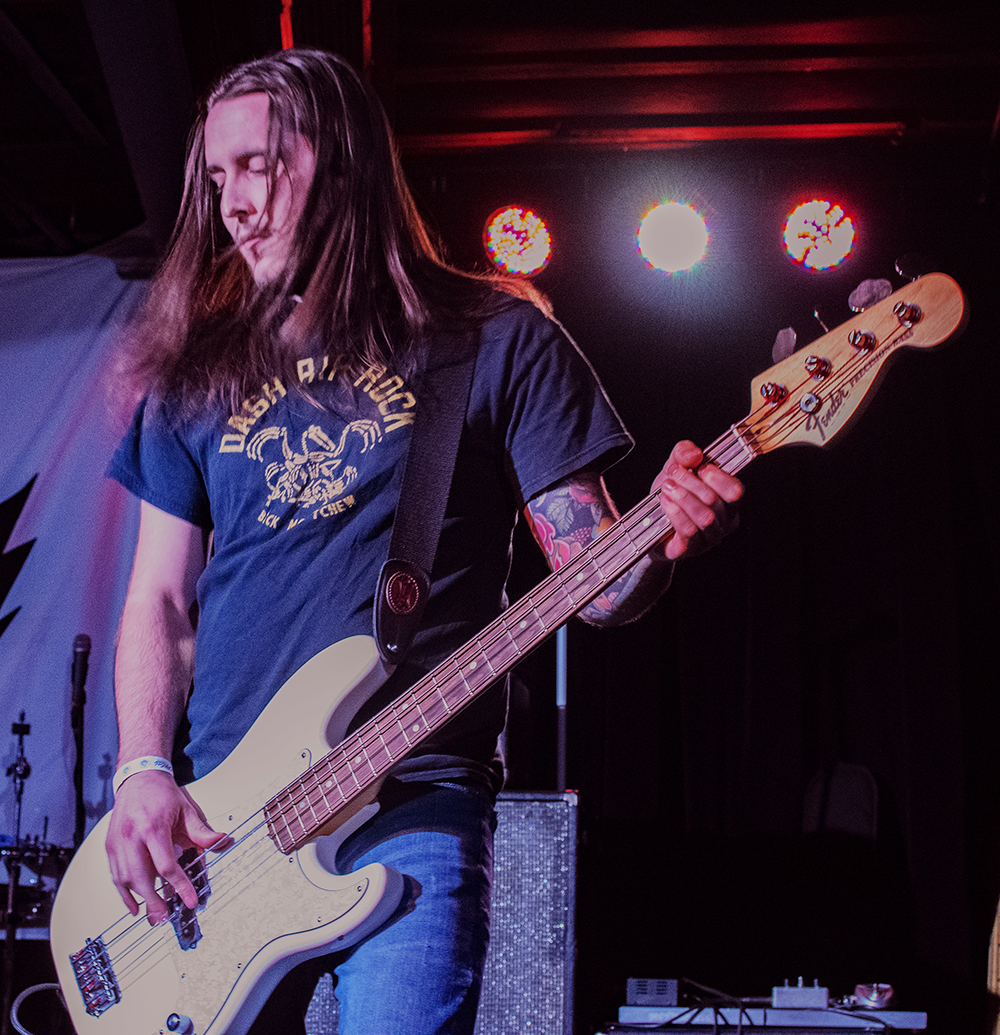 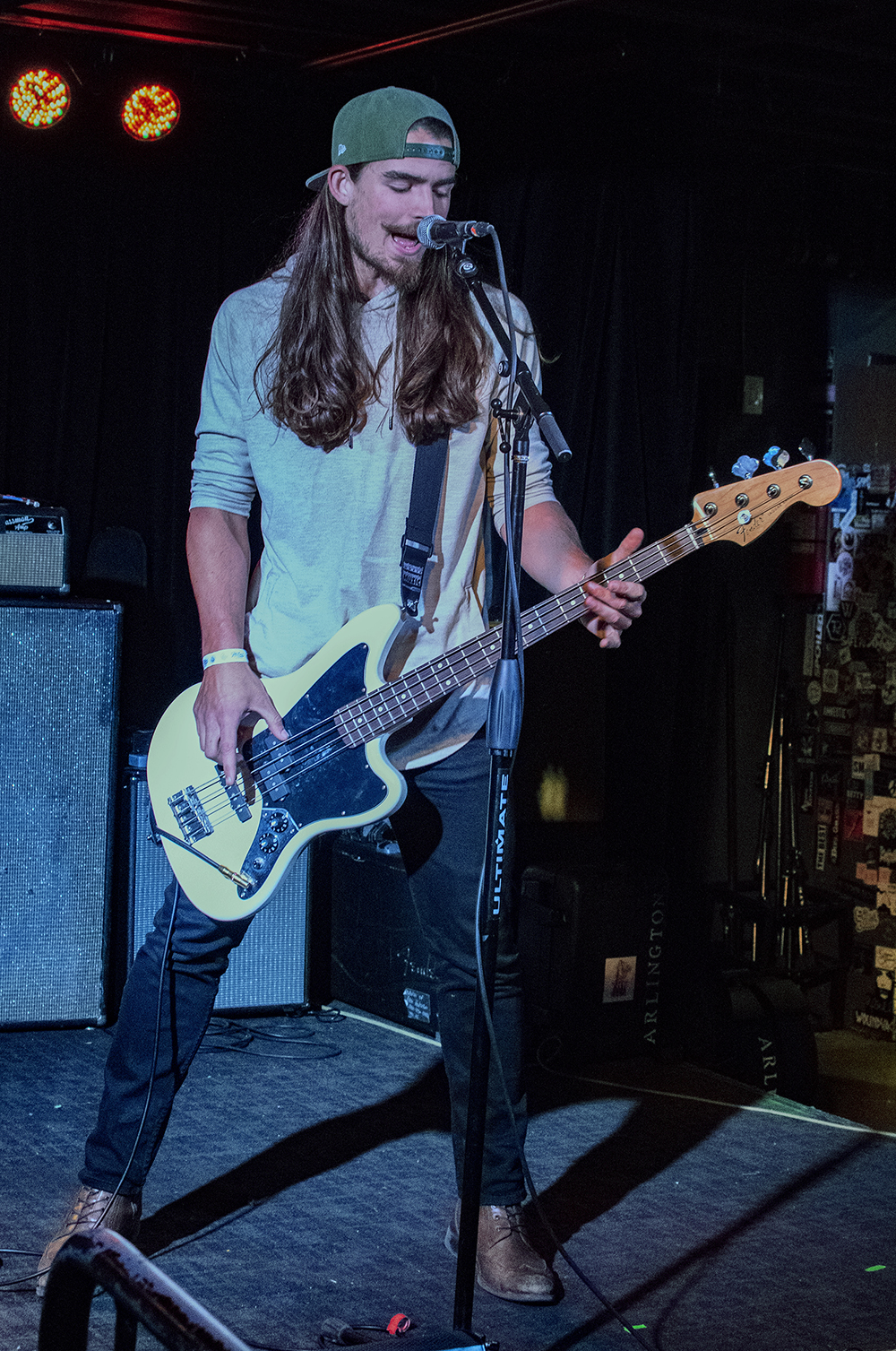