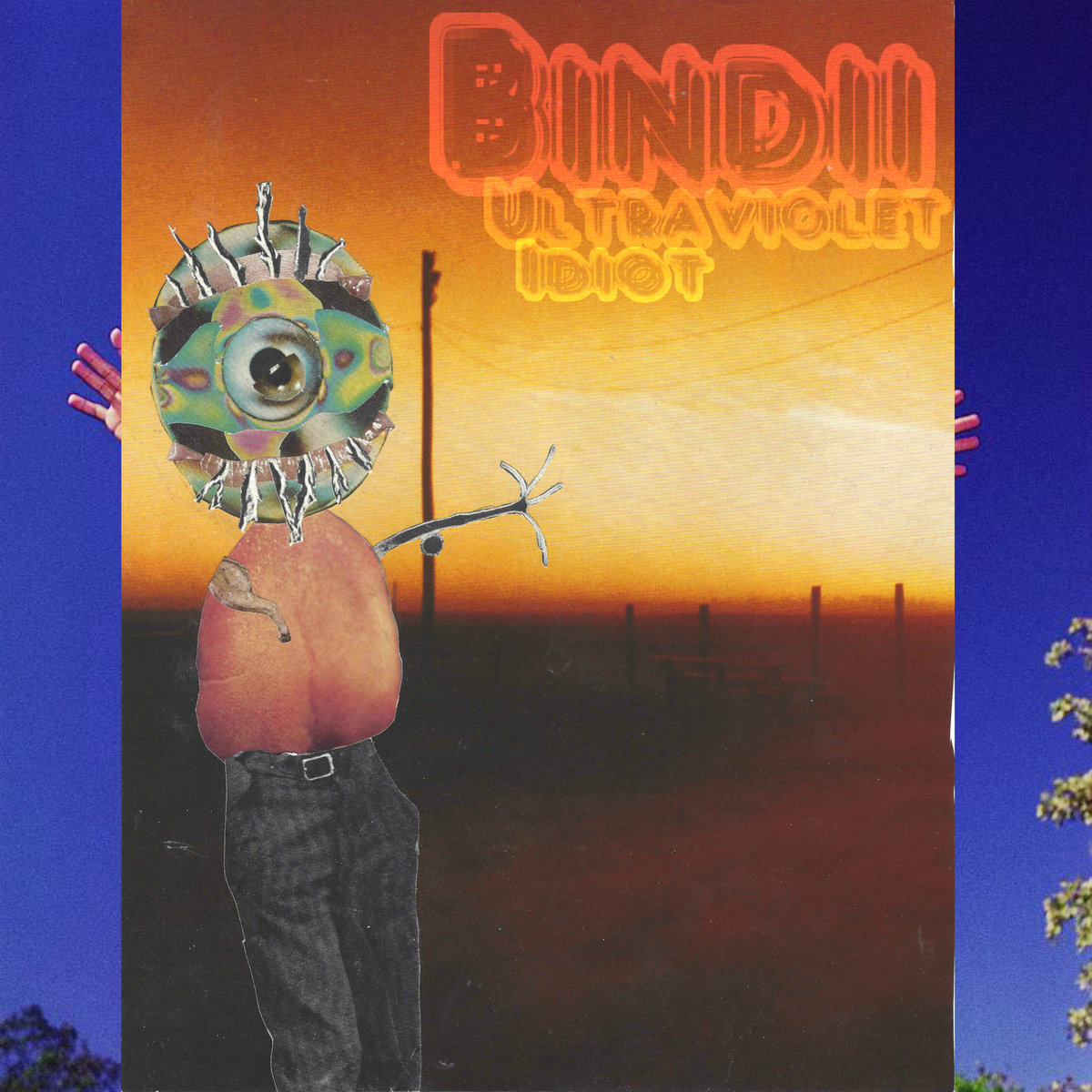 Zachary Wubbena is the prolific songwriter behind the stoner-rock sounds of Tempe’s Bindi-Eye. His new album, Ultraviolet Idiot, is the latest in a string of dreamy, lofi, prosaic releases to emerge from the artist and just might prove his best work to date.

“My Stars are Fuzzy” starts off the album in a dreamy way while managing to establish the minimal and lo-fi approach that will define each track found on Ultraviolet Idiot. This isn’t an album packed with overly polished, radio-ready jams. Bindi-Eye offers up something a little more raw and a lot more earnest in his songcraft.

“Cow Skulls and Swimmin’ Pools” follows and you’ll get that sluggish feel of an idle summer afternoon before “Polarity Disparity” kicks up the folk-punk energy, and the dust, as Zachary flexes that lyrical prowess that really elevates the music of Bindi-Eye from your everyday bedroom stoner rock to something really special.

The artist’s “journal” approach to songwriting captures some authentic human thoughts and emotions that will resonate with listeners as they float along to the music of Ultraviolet Idiot.

“At a Loss” continues to amp up the energy before “My Clouds are Neon” soothes out the more aggressive elements with a relaxing musical interlude. “Suspended Adolescene” hits some upon some personal strife I feel any struggling artist (or burgeoning adult) can definitely relate to before “My Eyes are Ashes” closes out the album with a subtly haunting soundscape; a moment to process, if you will, all you’ve taken in over the course of Ultraviolet Idiot.

Dive into the new album from Bindi-Eye below while you check out our Q&A with the man behind the music, Zachary Wubbena, about all things music-making and songwriting.

Carly Schorman: Listening to Ultraviolet Idiot I definitely get a lazy-afternoon-stream-of-consciousness feel. I would love to know more about your song creation process. Maybe we can start with how you approach songwriting?

Zachary Wubbena: To me songwriting is usually part boredom, part exorcism, and part experiment. I usually write lyrics at work because the restaurant gets really slow sometimes. I might even hum it to a melody if nobody’s near me; that’s the boredom part. It’s usually some heady garbage I’ve been carrying around that I just need to sort out and get out, like an exorcism. The experiment is when I record, trying to get the composition right, messing with effects, all the fun stuff that I do on my days off. Of course, this isn’t always the formula. Sometimes I just grab my guitar, pick a few chords and belt out what ends being a song, those are usually my favorites. Other times I just need to abstractly describe a feeling via an instrumental track.

The album has great movement and variance, but a singular aesthetic is held throughout. Did you conceptualize Ultraviolet Idiot as a whole composition or is it more a collection of songs you gathered together for release?

A bit of both, I’d say. All my albums are really conceptual, and I can’t imagine them any other way, but I do write songs independently. I try to make the songs make sense in and out of context. Most of the time I’m essentially using songwriting to journal parts of my life so it just ends up that way. Songs are probably the only thing my brain knows how to compartmentalize and I love making album art and tying it all together. Ultraviolet Idiot is no exception. I wrote “Cow Skulls” and “Swimming Pools” and the rest of the songs followed suit, with the instrumental songs really bringing home the themes and feeling.

Where did you record the album? Did other musicians take part in its creation?

I record pretty much exclusively alone at home, although I think I tracked “Cow Skulls” to tape at my partner’s old place. It’s just me on this album, but I sent it to Jalipaz Nelson (at Audioconfusion) for mastering because he’s the wizard, godfather of the scene, and also really good at audio stuff. There were a couple exceptions on my last album, Soapbox Synthesis, though, with Daniel Suber (Hesperus, MC/DC) and my partner, Em Casalena, contributing spoken word.

And, for the gear heads out there, what’s your set up like? Does it differ for live performances?

So far Bindi-Eye has remained only a recording project so that I could focus on playing out with my band, Sun Conscious, but I’m hoping to change that this year. As far as gear goes it will probably be disappointing to most gear heads, although not surprising given the quality of my recordings. My interface Is an M-Audio Mtrack and I’ve been mixing on a really shitty Toshiba Satellite running what I assume is an i3 processor and 4 gigs of ram for the last 4 years, which is also something that needs to change this year.

My favorite though is my Tascam Portastudio 464 because I love cassette tape and not staring at a screen when I track things. It’s old and the pots/faders are scratchy but it’s served my lo-fi endeavors very well. I also use a mono tape recorder for those really shitty tape sounds.

Currently the instruments/amps I record with are: a Fender cp-100 parlor acoustic guitar, a Squire vintage modified strat, an Ibanez acoustic bass, an Orcoa Companion chord organ, a Casio ct-510, a set of Hohner blues harps, a Vox AC15, a Vox AC4TV, a Danelectro Honeytone mini amp, and most recently a Kalimba.

My guitar pedals are the only respectable pieces of gear I own but I’ve probably already made most gear heads cringe and bored everyone else so I won’t go on. I will say this though, you should always work with what you have, because you will never have enough.

Why did you choose the name Bindi-Eye for you musical project?

I guess I just have an affinity for flat bike tires and thorns in my feet. We called them goat heads when I was younger, which the thorns definitely resemble. They’re the bane of every aspiring BMXer building dirt jumps in the empty lot by their neighborhood. Bindi-Eye is an annoying, thorny weed without any use, except for in weird traditional medicine and sketchy dietary supplements. I just sort of identify with that.

What’s next for Bindi-Eye? Do you take a break after releasing an album? Or go right into writing more songs?

I’m always writing, it’s compulsive, and hopefully never going to end because it’s keeping me sane. At the moment I can’t record anything because my poor Toshiba is pretty much dead, I’m surprised it’s gotten me this far TBH, but I should have a new laptop by the end of this summer. Luckily I have a bunch of instrumentals on a USB drive ready for mastering, which will make up the next album. Right now though I think I’m going to focus on how I can finally bring these songs to the stage, hopefully I can recruit enough people to make it happen, or get the nerve to just play them really stripped down by myself.