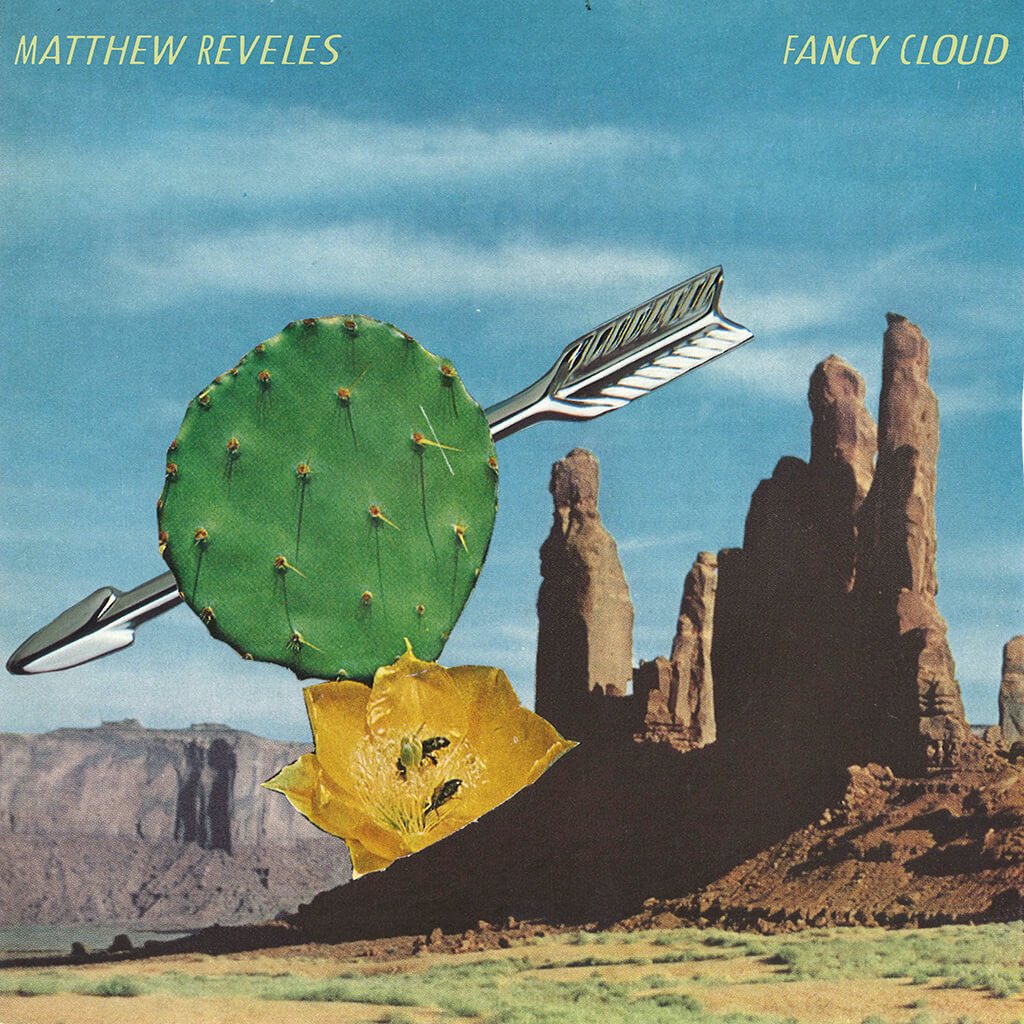 Matthew Reveles and Fancy Cloud are back with their new, 2019 album, Split.

But enough reminiscing. Split seems to pick right up from where Halfway and New Jacket left off, with Reveles’ indie-alternative-country-rock sounding better than ever. Split into two sides with four tracks each, the Matthew Reveles’ side of Split opens the album with “Settle Down”. As he poignantly states amongst slide guitar and banjo, “Time to settle down/Make this house a home/Soon I found out/Sitting still right here I cannot grow.” The three other songs follow in similar manner: steeped in Americana with plenty of sad-bastard bars for the weary or heartbroken.

When Split is flipped over and the Fancy Cloud track “December 11” begins with it’s distorted, electric guitar, you can tell right away that we are in much different territory — although much of the scenery is the same. This is still Matthew Reveles, it’s just… amplified. It’s really hard to say which side I enjoy more, however, I simply love the old-school pop elements thrown into the Fancy Cloud side of things and so I would have say Side B stands out just that much more to me. The re-recorded version of “No Going Back”, the B-side to “New Year, New Jacket” is a nice touch too.

I felt I needed to find out as much as I could about this release so I contacted Mr. Reveles and he was kind enough to take the time to answer my questions. Read on to find out all about Split as well what’s upcoming for both Matthew Reveles and Fancy Cloud below…

Mark Anderson: How did the idea for a Matthew Reveles/Fancy Cloud split come about?

Matthew Reveles: The idea for this record was actually about eight years in the making. The original plan was to release a double album, with one album being the “Matthew Reveles” stuff, and the other being the Fancy Cloud tracks. Suffice to say, there was a lot more material initially. However, during my first attempt at tracking, a hard drive crash erased the entirety of the nearly completed album. I kind of lost my mind for a little bit after that, but I eventually regained my sanity, only to have my second effort thwarted a couple of years later by a fried motherboard. Finally, using what I now refer to as my “Ship of Theseus” 2004 MacBook, I was able to capture the songs— well, a more whittled-down arrangement of songs— for long enough to get them mixed, mastered, and pressed to vinyl!

It seems as though your solo side of the record is a little more singer-songwriter/folk while the Fancy Cloud side is a little more rocknroll/full band? Is that the intent of both projects?

Yes. The sort of juxtaposition of the folky country material on Side A against the indie-rock-pop-whatever of Side B was definitely intentional. With the exception of maybe about a year almost a decade ago, Matthew Reveles and Fancy Cloud have really been two separate projects. After performing under my name for so many years, I started feeling increasingly limited musically— sort of relegated to staying within the parameters of the “down-home, hootin’ and hollerin’ whiskey drinking music” that kind of defined my style for better or worse. Fancy Cloud was a way to write and play the louder and more unstructured stuff that was bouncing around in my head. So I decided to put out the Split LP with each side featuring the different styles and sounds.

Although you wrote, performed, and recorded the entire Split yourself, you have a few guests on the album, could you tell us about them and what they play?

Yeah, I had my friend Jeremy Locarni play an organ part on one of my songs, and my friend Mando Calrissian played cello on another one. I’ve been in a number of projects with both of them throughout the years, and, even though the majority of the record was tracked by myself alone in a room, I couldn’t imagine making a whole record without having contributions from people who have been such a part of my life — both as friends and musicians. Plus, I was having a hard time with the organ because I’m not very good at anything with keys, and I also don’t play cello at all, let alone as beautifully as Mando.

If I’m being completely honest, a fair amount of the tracks I did record myself, I did so out of necessity, by which I mean it was virtually impossible work under a schedule that allowed any of my other friends and collaborators to get in the studio — there was lots of middle-of-the-night spontaneous tracking.

The credits also state “Recorded at Gumbo Marx Studio and on Planet Wilsontron.” Could you give details on that sentence?

Haha, yeah, so Gumbo Marx is the name of my studio, which I built in the garage of the house I rent in Tempe. I think it goes without saying that I’m not getting my deposit back when I eventually get priced out of here! Anyway, one of the downsides to having a garage-turned-studio in Arizona is that during the summer, by which I mean from about March to October, the room gets uncomfortably warm, even with the wall-mounted AC unit that I may have permanently altered the structural integrity of a wall to install.

Anyway, so that’s where Planet Wilsontron comes in. Back when I played in Makeshift Skyline, a band led by the aforementioned Jeremy Locarni, we used to practice at his North Phoenix house, in which he built a way bigger and far better ventilated studio, which was known as Makeshift Skyline Studios. Incidentally, he recently sold the house to his former tenants, our friends and other former bandmates: banjoist Russell Schacherer and drummer Justin “Wilson” Wall.

So when it got too hot to record in my studio last year, I packed up all of my gear in my little Subaru and had a couple of weekend staycations in what Russell and Justin began referring to as Planet Wilsontron, which is obviously derived from one of many variations of Justin’s “Wilson” nickname. I set up shop in the empty studio and tracked probably almost the last half of the record in there, sleeping on the studio couch and emerging into the common house only for food and celebratory whiskey breaks.

Awesome that is was mastered by [Jalipaz] at Audioconfusion as well. Had you ever worked with him on any projects before?

I was so excited to finally work with Jal! I first met him probably fifteen years ago when I was working at a studio in Phoenix called Zoe Music Productions. At the time, we were reconfiguring our setup from a predominantly PC and ADAT operation to Mac and the then-brand-new ProTools 7, which, incidentally, is the same version I used to record this album on my antique MacBook! Anyway, Jalipaz came over and was super helpful in getting us set up with everything.

At the time, I remember he was recording Asleep in the Sea, a band I was totally into at the time, and he was also working with Andrew Nagle, a guy I’d been collaborating with. I immediately grew this deep appreciation for the recordings he was coming out with; the sounds he would get and the way he would bring out the essence of any band, regardless of genre, it was amazing.

Anyway, it was really fun and educational being able to mix and master with him. Truth be told, if I hadn’t had to shell out so much for the vinyl pressing, I would’ve loved to have recorded the entire thing in his studio. I’ve since had the chance to do some session work in his space, and it really was just as cool as I imagined recording in there would be. 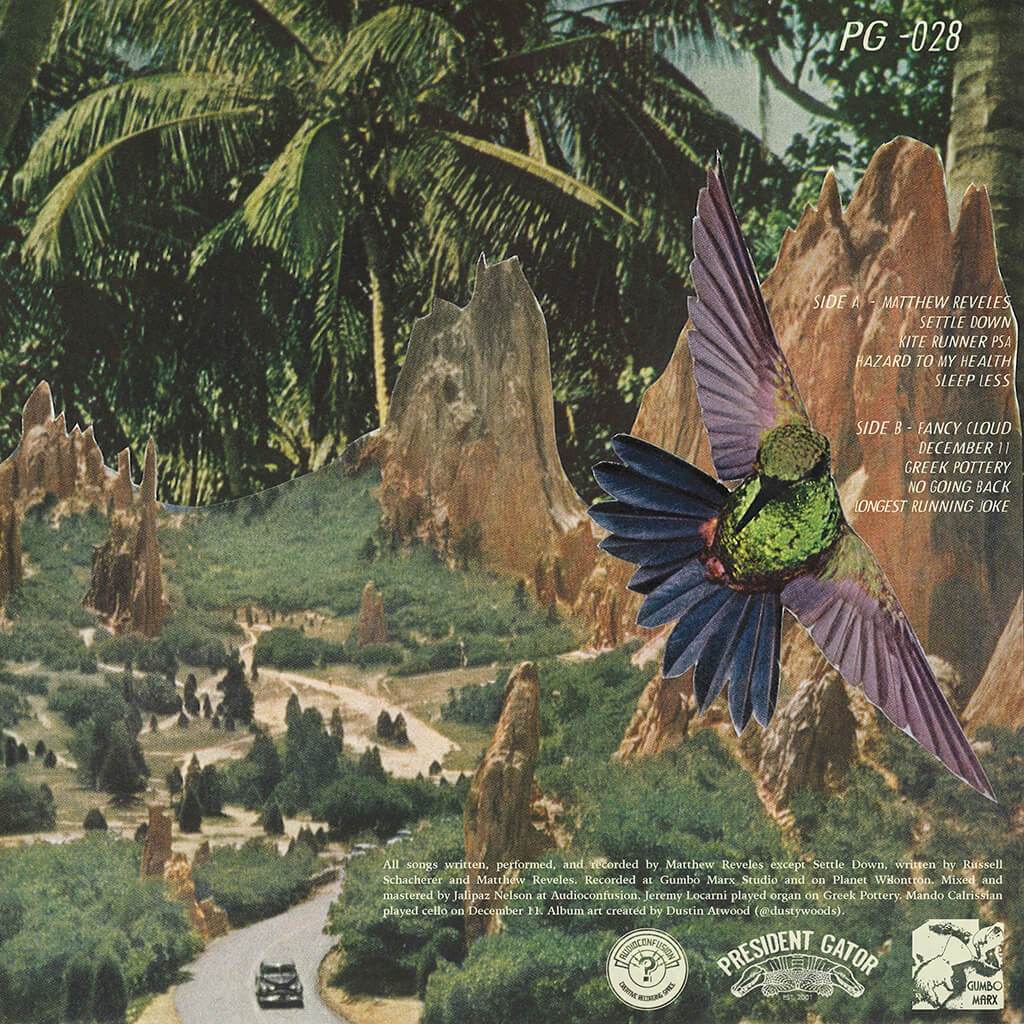 I love the artwork too. How did you hook up with Dusty Atwood? Did he create this piece specifically for your album?

Yes! I love the artwork too! Dusty Atwood is a dude I actually came in contact with through Instagram. He lives in the Bay area and, in addition to making awesome art, he also makes stickers through his brand Pineapple Machete. One such sticker is an LA Dodgers logo with a red circle and line through it, which, as a fellow Giants fan I immediately had to order from him and start plastering everywhere. So after following him on the ‘gram, I became a huge fan of his artwork.

I love his surrealist collage work, and I thought it would be a great fit for the mood and feel of the record. So I commissioned a total of three pieces from him, two of which make up the front and back of the record, and one that I will undoubtedly use for a future release. He was super approachable and open to hearing my vision for the record, and, once he’d heard some early versions of a few of the tracks, he put together some ideas, the likes of which ultimately became the album art.

Any future shows or other plans for Fancy Cloud?

I definitely have plans for both projects. I’ve kind of decided that the Split LP will probably be my last physical release, at least for the foreseeable future, but I still have a fair amount of material that I plan to release digitally. Plus, I’ve really gotten back into the routine of playing and writing often throughout the recording process, so I have some more stuff to work on tracking as well. As far as shows go, there are some tentative things on the horizon, but I’ll have to see whether they materialize. Ultimately, I think I’ve mostly traded being a full-time gigging musician for being a dad who occasionally emerges from the hermetic bubble of family life to sing some songs and drink some well whiskey.