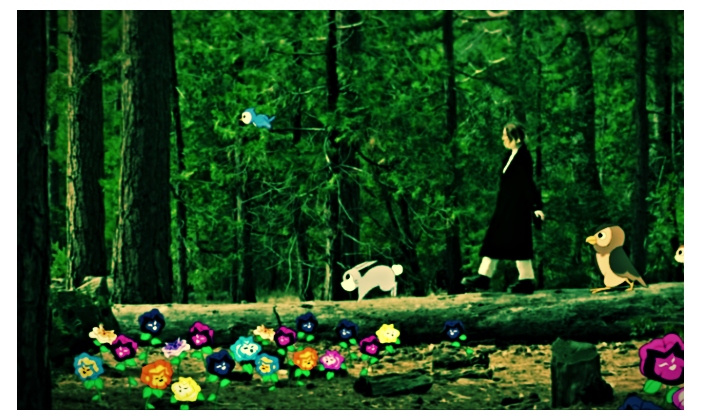 This L.A. (by way of Boston) trio is currently topping the charts at YabYumHQ and making more meaningful waves in the larger music community as well. Slothrust released this music video for “Peach” after returning from their UK tour in support of The Pact, the band’s fourth album, which dropped in September. The cheery Disney-esque animated elements of this music might initally feel a little disjunctive with the band’s alt rock style, but once the lyrics hit you, you’ll begin to see the playfulness of Slothrust and the forest creatures will seem right at home.

“Happy” is what happens when a hard rock act decides to consciously direct all their anger toward a more upbeat place. I like it. It’s catchy… and still kinda dark. “Happy” is just the first single of six the Swedish band plans on releasing this year so make sure you  smash that follow button on Spotify to keep up with Volger.

This Swedish/Belgium indie-electro duo is making something slightly sinister sounding with those synthesizers and we’re loving the results. “Free Insult” is Victoria+Jean’s “reaction towards all these free hug movements” in our cultural consciousness. They are ready to breakdown the barriers that keep people from embracing that inner anger with this cathartic release of pent up energy.

Fort Collins [CO] is sending us some wiley garage rockers to rep the weird punk sound of the westerly states and we’re all about it. The Sickly Hecks keeps their sound intentionally unrefined for some distortion-heavy sounds that you’ll want to dance to. “Primitive” comes to us from the band’s 2019 EP, Go to Heck, which you can (and should) listen to over on Spotify.

This Melbourne mash-up of electro-pop and hard rock brings together the talents of Alex Steve and Kieran Bahlmann to make up Leipzig Lab. This duo is so Industrial, they write all of their songs over the internet without direct interaction. Two home studios, one shared drive, and the chilling alienation of the Internet Age comes into full-bodied form with Leipzig Lab’s “Unloved”.

Down To The Bunker
“The Asylum”

Geneva’s Down To The Bunker released their debut LP this year and, on it, you can find this feisty track. “The Asylum” has all the angsty energy you could possibly want from a Swiss Nu Metal band and the rest of the album doesn’t let up. Check out “The Asylum” below and then head over to Soundcloud to check out Misery by Down To The Bunker in its entirety.

The Mean Times
“Be Still My Bleeding Heart”

I’m wondering if The Mean Times might now be just as rowdy as their sound suggests. In the past few years, the core trio at the heart of the Melbourne band (Eoin Clements, Rob Meerbach and Tom Morgan) ran through auxiliary members faster than Mark E. Smith did in his day. We’re talking eight drummers, three bassists, and three guitarists. But they persisted and “Be Still My Bleeding Heart” has all the energy of a barroom brawl… which is probably how they lost six members. Pure speculation, but you know I’m probably right.