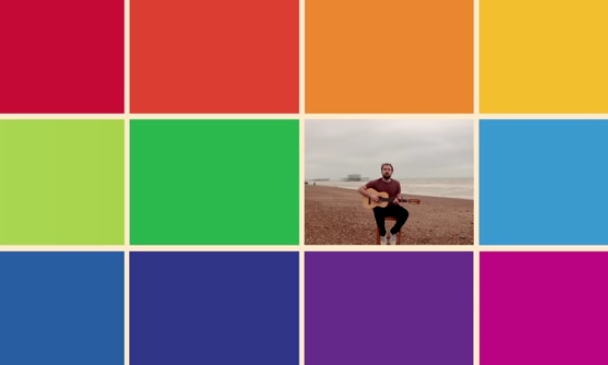 The harmony-rich indie-folk of the Keston Cobblers Club will wrap you in lush layers of sound with their new single, “Here’s the Truth”. The track comes to us from the Brit band’s forthcoming album, Siren, which comes out later this month (April 19th). No matter how frazzled your day, Keston Cobblers Club can help you take it to a more zen place with “Here’s the Truth”. Better than a cup of chamomile.

Jazz singer-songwriter Nishla Smith channels some Billie Holiday on her new single, “Blue Dream”. The song is about a slow self-awakening and the musicality is lulling and leaves the listener with the sense of emerging from a dream-filled afternoon nap. Shot in the Northumberland wilds and directed by the songwriter herself, the music video for “Blue Dream” proves well-matched to the song itself with its strange visions in tranquil settings.

The songwriter known simply as Delafaye has quickly emerged as one of Louisville’s rising musical talents following four successful EPs (and more than 4 million Spotify streams). “Godspeed” marks the first single from Delafaye’s much anticipated debut LP through Street Mission Records. His homespun indie-Americana will leave you feeling pesnive and porch-swing mellow.

Swimming Bell is the musical moniker for Brooklyn-based folk singer Katie Schottland. Schottland didn’t even take up music until 2015 and she released her debut EP two short years later to critical acclaim. And, two years later, Swimming Bell is back with her first LP, Wild Sight. Talk about a timeline. Sink into the lush harmonies of  Swimming Bell’s new single, “1988”, and then head over to Bandcamp to secure Wild Sight on vinyl while copies remain.

This songwriter from Lisbon draws from American folk music when crafting her earthy indie sound. “Ghost Notes” marks the recording debut of Marinho but I expect this is an artist we’ll be hearing more from… especially considering she has an album lurking on the horizon. Marinho (aka Filipa Marinho) presents a sense of calm resignation in her songwriting on “Ghost Notes”, something a little too wise and weary for her age, but compelling all the same. Follow Marinho on Spotify to keep up-to-date on the new album.

This Phoenix 4-piece formed just a few short years back but it seems like they’ve already become a Valley staple. Just last weekend, they played at ThirdSpace with Moontrax and Vintage Clothes on Saturday before booking it down to Tucson for a gig at Club Congress on Sunday. AND, to top it all off, they just dropped this new single (complete with music video) on the first of the month. If you’re down with soulful indie, you should check out “Salt” from Panic Baby.

Chris Isaac’s “Wicked Game” has been described as haunting, but Cyrene takes that feeling to an entirely new level in her cover of the 1990 classic. The single comes to us from Cyrene’s new EP, Time to Pretend, which features several cover songs, including Elton John’s “Rocket Man” and Duran Duran’s “Ordinary World”.