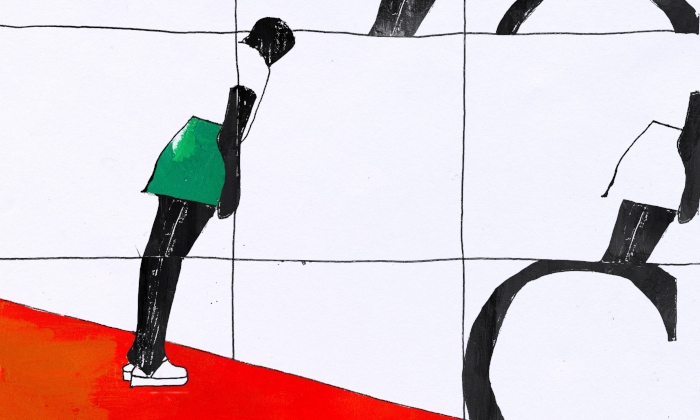 Get ready for the one-off here, folx, and that’s because Bear Ghost can’t be crammed into any genre or boxed-in to a style. They are unto themselves like a nerdcore Queen for the video game generation. “Haunt, The Cartoon Heart” is apocalyptic and operatic, but, you know, fun. This new single was released through 80/20 Records earlier this month and Bear Ghost is out on tour with Simpsons-famous Okilly Dokilly through the end of the month, but we’ll hopefully see some PHX shows on the flipside of that tour (hint hint).

Simen Mitlid has a new album in the works which means fans have been getting a steady stream of singles from the songwriter this year. The singer-songwriter hails from Os, Norway and I’m wondering if maybe it’s something to do with these old and icy places that caters to the creation of such soft-spoken, but vibrantly beautiful music, like Belle and Sebastian or Simen Mitlid. Then again, Belle and Sebastian are notoriously nerdy and “Chaotic Good” is, well, a song about D&D. Maybe the correlation lies somewhere else, i.e. music nerds make the best music.

I’ve been a longtime Lauren Ruth Ward fan now so you know I’m not blowing air up your skirt when I say this new single might be her best yet. Sure, it’s not the next radio smash (although we will definitely play it on our radio show), but “Hungry Barber” has a realness to it, a breath of life, that will make it an instant fan favorite. The stripped-down single clocks in at 90 seconds so it feels more like a stolen moment; an intimate glimpse into the creative partnership between LRW and Eduardo Rivera, her songwriting partner. Listen below..

Snake and the Rabbit

Hikikomori, for those who might be wondering, is a “psychological condition which makes people shut themselves off from society, often staying in their houses for months on end.” [1] Or, in other words, my daily introvert daydream. And, it looks like I might not be alone in this quest for unceasingly isolation (ahem, husband excluded… maybe). Keith Cooper’s “I’m a Hikikomori” has me hyper aware of that post-human pull but my anxiety is assuaged by that danceable indie energy Keith puts into his music. Pensive needn’t be drab, fellas, just because you’re sad. Keith Cooper gets it.