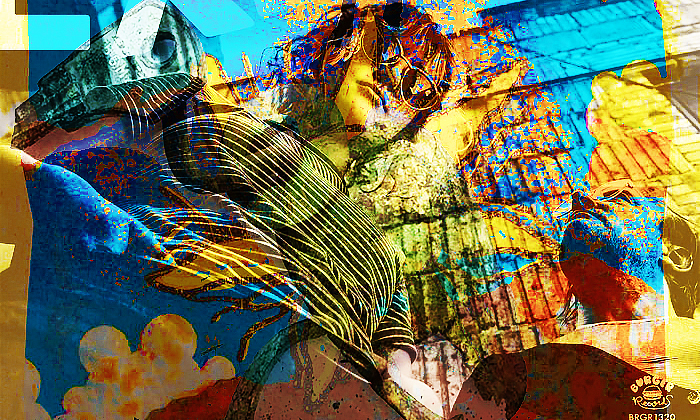 The Meat Puppets are back with their latest Megaforce Records’ release, Dusty Notes, following 2013’s Rat Farm. Original Pups drummer Derrick Bostrom has returned since their ’95 album No Joke! and joins brothers Cris and Curt Kirkwood along with keyboardist Ron Stabinsky and Elmo Kirkwood on guitar for an awesome new collection of songs that keeps the band fresh and relevant some 38 years after first forming. Album opener, “Warranty”, creates a lively Southwestern Americana feel that just doesn’t let up throughout the entire LP before their latest single, “Nine Pins”, with it’s stellar banjo lead, reinforces the strong lead of Dusty Notes.

My only real negative critique of this album is that there doesn’t seem to be a lot of variation within the soundscape as the album progresses, so it might start to sound like one long song rather than just a singular concept, but it’s a song I enjoy. Early single “Sea of Heartbreak”, with it’s catchy, piano driven melody and stellar harmonies, is a song I must have listened to a thousand times by now since its release. But the penultimate track, “Vampyr’s Winged Fantasy”, is the hardest driving (and most surprising) song on the album. After a calming intro organ, the song explodes into an all out, guitar-chugging rock fest. Closing with “Outflow”, one of the many ballads you’ll find on Dusty Notes, will the listener with a calming sense of peace…. the perfect outro to this album.

The Meat Puppets are on tour throughout the U.S. in May before heading over to Europe in June. You can purchase Dusty Notes in a variety of special edition vinyl formats.

While E is 4 Exbats is technically a compilation album, but if you’re into records, you’re gonna wanna have this for your personal collection. Combining the band’s favorite songs from their first two tape releases on Burger Records, this is the first time The Exbats have been released on vinyl. And they even threw in a rerecorded version of “Are We Dead Yet?” to kick things off. If that wasn’t enough, all the tracks have been remastered and sound extra fabulous for the vinyl pressing.

The Exbats are the dynamic duo of Inez (drums/vox) and Kenny McLain (guitar/vox) joined by dynamo Bobby Carlson on bass and Matt Rendon (Resonars, Harsh Mistress, Freezing Hands, TWGS, et al.) on drums. Recorded at Matt’s Midtown Island Studios in Tucson famous for hitting that garage sound oh-so-right every time. And, while none of these songs are exactly new to fans, it’s great to have one album.  On this record you can find “Everybody Loves My Mom” and “Girls Like These” on the flip side of “2027” and “I Got Fights” – that’s just pure rocknroll heaven. Pickup a copy of E is 4 Exbats from Burger Records and follow the band to find out when they’ll be playing near you next.

The World Class Thugs have released their latest album, Southwestern Dirt Circuit, through Onus Records and, if you’re a fan of “disco bluegrass swamp”, you should definitely check it out. Honestly though, I just had to throw that self-description from the band in because I like it so much, but what you’ll hear on Southwester Dirt Circuit is a great mix of experimental Americana and post-punk carousel music that certainly sounds like nothing else.

While the band has gone through some line-up changes, current members Jocelyn Ruiz Dustan, Jim Dustan, Dale Fox, Andrew Jemsek, Tony Juarez, and Trent Morue are all veterans of the Phoenix music scene and that fact really shines on this release. Opener “Love You Every Morn” sets an appropriate tone for the album with it’s rolling snare drum shuffle and alt-country style, but I feel the album only gets better from there. “Lazybones” and “All Things Sweet” are early standouts, bringing the energy down-low and for a homey feel before things ramp up again with “Frail” and “Fume n Fret”. Southwestern Dirt Circuit closes things out with lithe and ruckus “Red Eyes” which has Jim and Jocelyn trading vocals while the band blazes behind them.

Catch the release of Southwestern Dirt Circuit on April 26 at Chopper John’s along with San Jacinto Prison Band (who will also be releasing their new album), and all the way from Alamogordo, New Mexico, Fatigo! More info on that event can be found here.