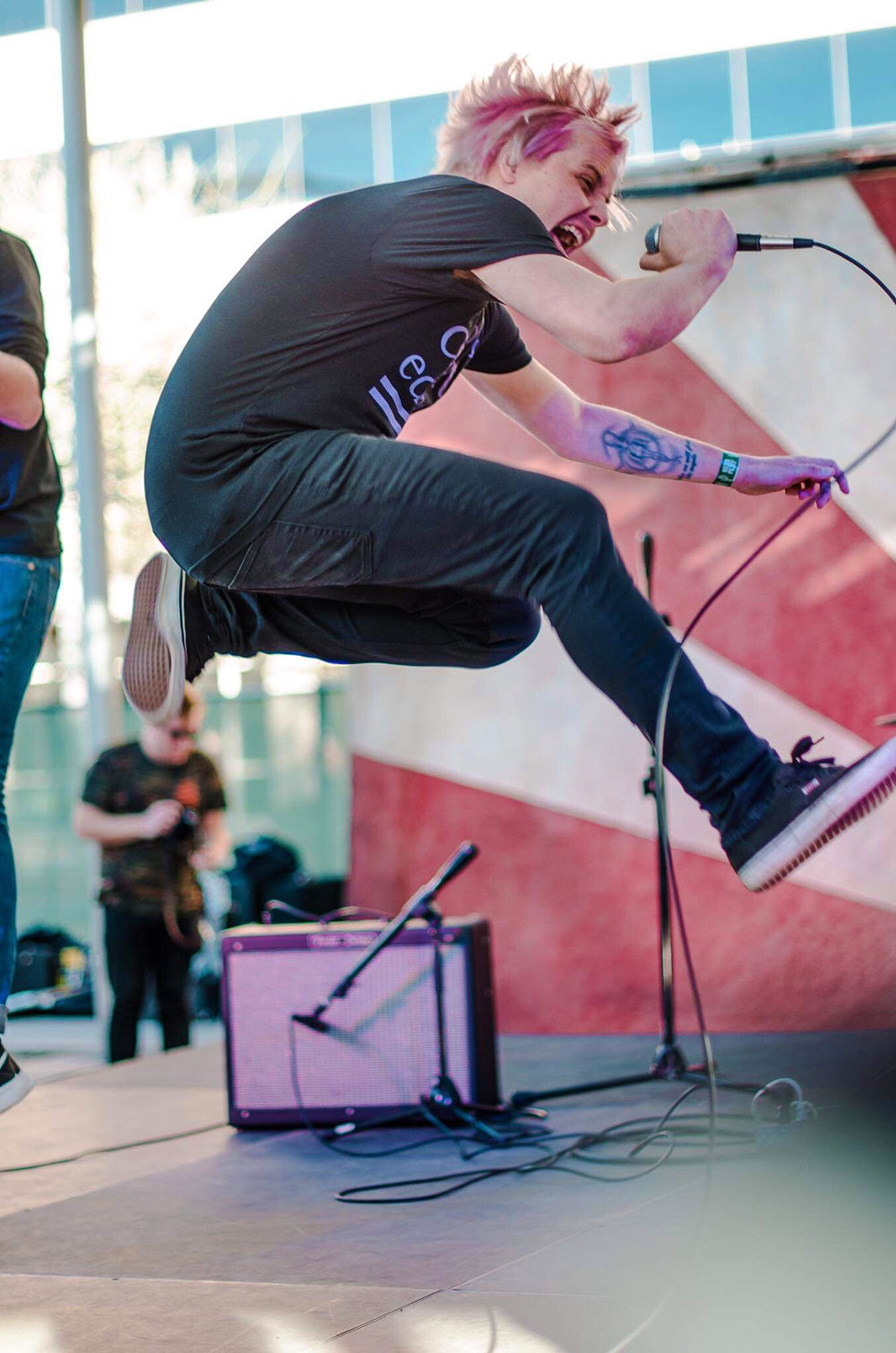 The hot, vast desert city that is Phoenix, Arizona is typically known for its burgeoning rock and metal scene. However, unbeknownst to numerous music fans, there is a tiny, thriving emo scene. This is where Sundressed fits the mold with it’s catchy hooks and earnest lyrics, ranging from addiction to figuring out life in this crazy world. Sundressed frontman Trevor Hedges formed the band in 2012 as an outlet to maintain his sobriety. While members have come and gone, Hedges remains the lifeblood of Sundressed. I sat down with Hedges on a Sunday after he completed his shift at Songbird Coffee to dish about how Facebook can emulate Spotify in order to accomodate music promotion; why authenticity can make the algorithm tolerable; and how social media facilitated a friendship between him and Dashboard Confessional’s Chris Carrabba.

Trevor: MySpace was still a thing, but that’s a completely different time. It’s definitely been just a lot of trial and error because it’s [Sundressed] is really my first band…just kind of paying attention [to social media] and asking a lot of questions.

So with that being said, have you made any mistakes promoting on the social media platforms, and what lessons have you learned?

Definitely. I didn’t focus on Instagram right away, and I feel like if we did that earlier on, we would have had more followers. And then another thing I did on Twitter early on, I think was a mistake, was mass-follow a bunch of people. I realize how annoying it is now. Follow a bunch of people and hope that they’ll follow back. I realize, in retrospect, we did get a lot of followers.

What are your favorite media platforms that you think are most effective in promoting Sundressed and why?

Oh, probably between either Facebook and Instagram, both for different reasons. It took me awhile to learn how to do Instagram correctly, but the story option is really, really cool as it provides a visual representation of the band both behind the scenes and onstage.  I like using Facebook for more straight-forward information sharing and paid ads.

What are your least favorite platforms and why?

I really don’t have a least favorite platform. I mean, unless you count Snapchat. I don’t like Snapchat. I never used it for the band. I guess they they all have their perks and their downfalls. I would say the reach on Facebook is probably the most difficult.

With all the money you have to spend?

Exactly. But the paid ads work really well if you do it right.

I’m thirty-one, almost thirty-two. So I had discovered so many bands on MySpace and I remember how cool it was and how connected you felt to the bands. And I always felt like it was a big deal, that you could go to their page, it would just play their music and had a little music player on there. I feel like something like that could potentially be cool. And [Facebook] is starting to do stuff where you could do the video on your cover photo and stuff like that. Maybe if they had some way to make it more community-friendly between bands and their fans… like how Spotify gives you suggested artist.

Facebook seems to be more for businesses. Would you agree with that?

Yeah, I would say so, because the parts of the band that I use it for are definitely more for business.

So you feel like that’s kind of the challenges of promoting on social media is money?

Yeah, just getting the people that to care to know about it. I feel like even Spotify is helping that happen in a lot of ways. I’ve noticed if you listen to band a lot, you’ll get an email announcing tour dates. The Spotify for Artists app is super helpful.

Have you been getting a lot of hits on Spotify?

Spotify has been really good for us lately. We’ve been lucky with some of the playlisting… well, certain songs. We’ll get it on a playlist, and then it’ll get saved by a bunch of people who hear it for the first time. And then we continue to get those plays because they’re on their playlists. That’s been a really cool way to reach new fans.

I feel like Generation Z is really into Spotify right now…

They are for sure. On our last East Coast tour in June, we have that song “Beck and Call” that did really well on Spotify. It’s almost two million play downloads. So we would play that song and then people come up to us after [the show] saying that they knew this song, but they didn’t even know who sings it. Which is insane to me [as] someone who grew up like buying CDs. Their attention spans are so short that they won’t even take their phone out of their to see what band it is.

In general, which social media platform do you think needs improvement?

I would say, probably Facebook the most as far as getting your posts seen.

How have you been trying to overcome the algorithm?

I’m definitely learning what posts will get more likes. I think to sum it all up, being yourself is the most important thing. Like finding those things that people respond to about you because if you are trying fake something than it comes off… So us, we’re like a fairly sentimental band, and I’m pretty open about my sobriety. I’ll post about that [sobriety] and people respond to it well. We’re goofy and silly and will post jokes and us screwing around.

I think people like to see that other people (creatives) are human?

Yeah, exactly. I think that’s the most important part of social media. If you’re making yourself out to be this rockstar, no one’s going to connect to you. There’s plenty of musicians that people can connect to now and that’s what [fans] want. The Maine is a huge example, watching how they do everything. Pat, their drummer, will get on live everyday and just talk to people for an hour.

How do you think social media has played a role in helping reach out to fans who are going through similar experiences?

That’s definitely been huge. It was, I guess getting sober with the steps is reaching out and helping others. [Also] realizing that I could do that with music made a lot more sense to me. I’m not a super, energetic, outgoing person. So I could never be a person that was like standing at a podium telling my story, but I can tell it with music. I make sure to say just a little something at every show, and I’ll post intermittently about it [sobriety].

We get a good amount of people emailing me just ‘hey, I got six months sober and your music helped make that happen.’ I’ve had kids who are in the trenches, struggling to reach out to me. That’s honestly pretty heavy and kind of overwhelming to deal with, but luckily we worked with a few different charities over the years that can connect people to a professional. The best I can do is tell them my experience, what I did and that it’s possible.

What has been your most rewarding moment on social media as a band?

It’s a couple of years now, but long story short, I got in touch with Chris Carrabba from Dashboard Confessional. It was actually a funny thing because a friend of a friend was working on their tour and they asked, ‘who’s the emo band in Phoenix?’ because their Phoenix show wasn’t selling well. So I got connected with this guy, and they’re like, ‘we’ll give you some tickets and do a social media exchange to post a show.’ So that happened, which is already cool, because Dashboard Confessional tweeted to us, but then Chris saw it [the tweet] and looked up our band. Then I get this text from him: ‘you got my phone number.’ Long story short, he was like ‘hey, I really like your band and your songs. I’d love for you to come up and play a song during our set.’

So at their last show at The Marquee, I got to go up and play a Sundressed song in the middle of the Dashboard Confessional set. That was insane. He let the whole band come and we got to hang out with them. We live streamed it, and we were really cryptic about it, and then Dashboard plays and he calls me up. That whole night was so insane. That was probably the coolest thing.

And we’ve stayed in touch, too. He’s the nicest dude. I’ll text him new songs and bug him. He said he’ll get the band on some shows someday. I hope so. There’s a lot of moving parts that actually make that happen, but he’s a sweet guy. He puts a lot of effort into highlighting young bands.

Do you have any good social media troll stories?

I got two. One was, we did this thing for Southwest Airlines and we got put in this contest where we were one of six bands in the United States. They put us on a plane and had us play for the passengers and they made a video of it. It was a contest to play at Red Rocks, but while they were promoting it, they had it in Snapchat ads. So we were just popping up in people’s Snapchat [stories] playing on a plane, and I got this tweet that was… gosh, I wish I remembered exactly what he said because it was so funny. But it was something along the lines of, ‘if I was on an airplane and and Sundressed started playing, I would just jump out of the window.’ That was funny.

Another time, we were doing a live acoustic video, so we were seeing the comments come up [live]. Someone commented, ‘everything is perfect, but you need a new singer.’ So that was fun. You’re always going to get those comments.

What advice do you have for other creatives on how to promote on social media?

I definitely think the most important thing is just a good product or art that you feel strongly about, you’re behind and just being as honest as you can. Meeting other people that are doing the same thing as you and supporting them is also big. I think that’s been the biggest thing for me is just that we’ve toured with a lot of small bands from other cities that are like the “Sundressed of that city.” Such as Nominee in Texas. Bring them here [to the Phoenix area], and we try to make everyone who cares about us care about them and vice versa in Austin. Just building a community of like-minded people.