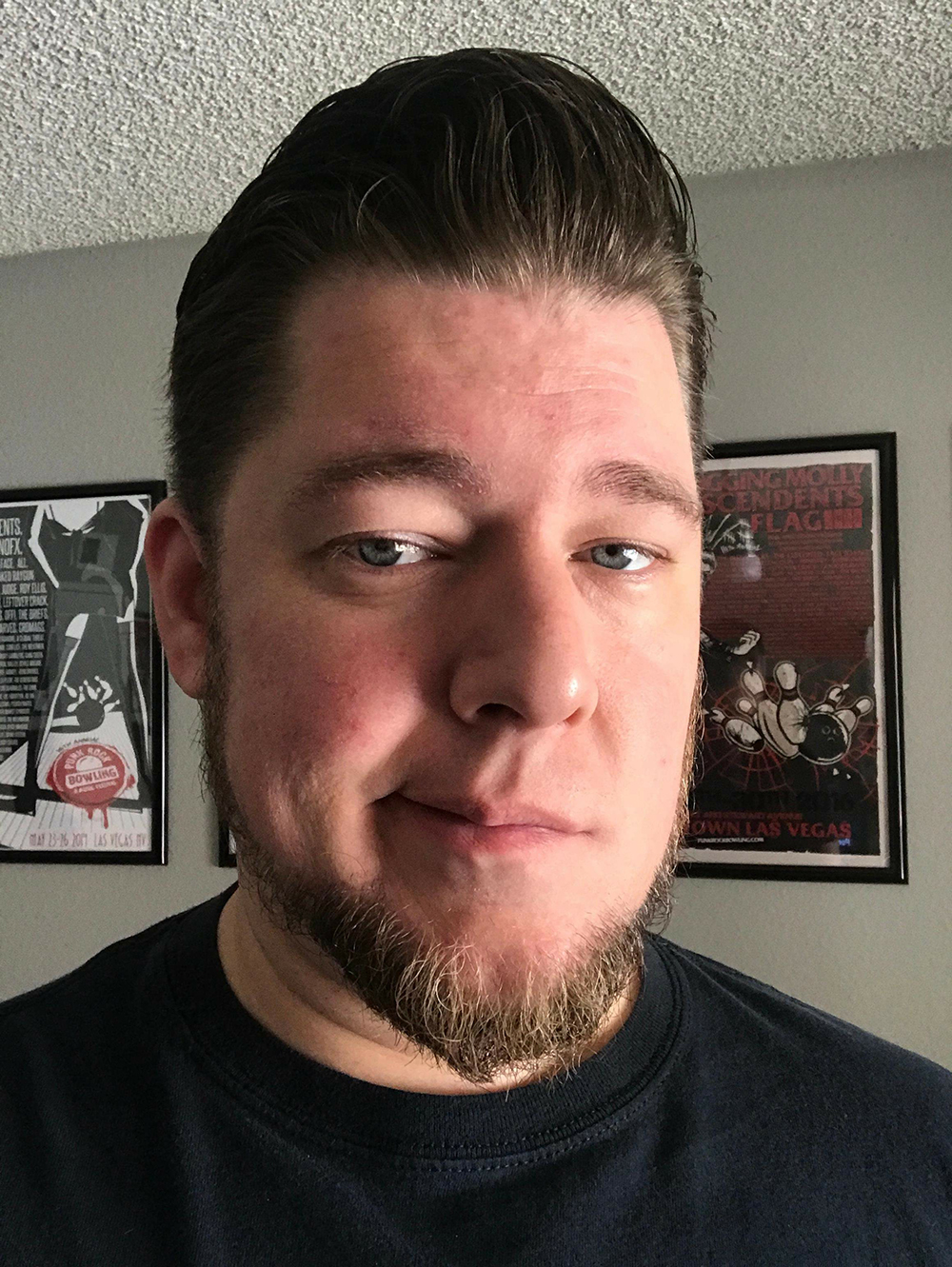 If you are a regular attendee of local and national concerts, you may have wondered who this guy is flying around the venue with a camera… or maybe you’ve seen his Instagram account of attending multiple shows a night and wonder if he actually sleeps.

The man behind the lens is Joe Maier, who goes by the moniker “Every Show Joe”, because, literally, he attends every show! Maier began chronicling his show haunts on his personal Facebook page in 2011, and shortly after, he expanded his empire into YouTube with “Every Show Joe Says Go” which highlights all the upcoming shows in the Valley.

Now, adding to his repertoire, Maier just launched “Concerts to Consoles,” pitting himself against local music stars to play a different video game in each episode while gabbing about what else? Concerts. I was curious about how Maier promotes his show-going endeavors in the world of social media, so I sat down with him on a Sunday afternoon at a Einstein Bagel in Tempe to converse about how got his moniker, why Facebook is always such a nuisance in promoting, and how punk’s biggest names are sharing his photos on Instagram…

Allyson: When did you start promoting as “Every Show Joe” on social media? Which platform did you begin promoting on?

Joe: It kind of came out in 2014 out of a little peer pressure to create a Facebook page when I was nicknamed “Homemade Shaker Joe” by Ska Punk Show’s Craven Moorehead. The Instagram came out of someone trying to tag me, and I’m going, ‘I don’t have one.’  So then I registered on Instagram in 2013. After the demise of KUKQ (in 2014), I was, like, ‘well that’s over so I guess I should re-brand.’ So I polled people and re-branded everything “Every Show Joe.”

What’s your favorite social media platform to promote on and why?

Instagram’s the most easy and I don’t feel like I’m fighting with it as much.

I feel like I fight with Facebook a lot and I hate it. I feel like I’m fighting with it just to get [my posts] shown to people unless I’m paying [for advertising]. And even then it still feels like it’s restrictive.

Despite paying for advertising on Facebook, do you think your promoting is still affected by the algorithm?

It feels a lot like I’m fighting with the algorithm.

How do you try to overcome the algorithm?

I thought of this a little bit, but I try to tag people in the photos as long as they are okay with it because that [post] will immediately get it exposed to their friends. Then just sharing it. If I share the [tagged] posts across most places, it should theoretically at least get to some more people.

It [Facebook] still could be restrictive. I did an interview with Mike from Burgandy Jurk, but his page was brand-new with 20-30 people (followers). No matter what I did –and I can see the stats on it– it was not seen by anyone. But then when I shared it as my own personal link, not connected to his page, it got more views. There’s also the restrictions that appear to be based on if you are a lower-liked page.

Do you think it also has to do with people’s privacy settings, too?

Less emphasis on paid promotion, but they’re a business so I can’t hold it against them. There are many reasons to consider Facebook evil. If they can get emphasis on trying to make money out of it for at least the “small guys,” that would be helpful. Or some “Small Business Initiative” where it didn’t either cost as much to promote or they just gave a better “view rate,” and to go through verification to prove you are real.

Have you made any social media mishaps and what have you learned from them?

Mishaps to me are more like, ‘oh crap, typo’ or ‘oh crap, I actually didn’t put the right link in there.’

The only thing I could mention is posting about a band from a show, and someone immediately messaging me about a personal situation with a male member of said band. Within five minutes I went through all my social media and deleted the posts (associated with said band) — I did not want to mention this band or give them any attention once I heard this [story]. I do not want to promote someone that has done abuse to someone else.

When did you start using Patreon? How has been your experiences so far?

It’s been two-and-a-half years. I actually was inspired by Kinda Funny Games website show. It was initially a way to give back, but also let people support me a little bit and to keep advertisements out of things. But right now, I have Yucca Tap Room sponsoring [my YouTube channel] “Every Show Joe Says Go.”

So I still put out ad banners that makes me pennies. Right now, I think I’m making forty-nine bucks a month.

One that I’m going back-and-forth on is print shirts, but I need to have money upfront to print them. One thought is to see if I can use Patreon to do it, that if people pay enough money into it and set it up as a tier. I have to look into it. So theoretically [doing these Patreon campaigns, “Every Show Joe”] can become more of a paying career.

And then with the [new YouTube channel] “Concerts to Consoles,” I’m hoping to get sponsors to give websites with referral codes.

Also lesson recently learned, is that you can’t do raffles, even if it’s not an Arizona thing. They [Patreon] consider it gambling. So I had to remove that raffle. I was giving away a vinyl, so I was investing twenty bucks into each raffle.

You can’t just give away a vinyl?

I can give it away, but it has be for everyone. It can’t be randomly drawn.

What has been the coolest social media experience promoting as “Every Show Joe”?

Three or four years ago, Jello Biafra and the Guantanamo School of Medicine played, I took a good picture with my phone at Punk Rock Bowling. It was shared immediately the day after, across not just Jello’s account, but on this record label’s [Alternative Tentacles] account. That was frickin’ cool.

Then last year, Jay Bentley [of Bad Religion] shared a picture of mine on the Bad Religion account from the Punk In Drublic Festival.

And then there was one other… it was Jay Bentley again using my photo from Punk Rock Bowling for a his post on Steve Soto’s (Adolescents, Agent Orange) passing where it was Fat Mike singing with Soto. Those were three cool ones to me.

And that’s something that I’ve changed, with a recommendation from Yucca Tap Room’s Ben [Talty], was that I started tagging venues. That way they [venues] can share it [my photo] if they want, and that’s been helpful to expand “Every Show Joe.”

Do you have any good social media troll stories?

No, I only get spam more than anything that I just look at and think is funny.

There’s my YouTube video from Comic Con in 2006 that someone was saying the audio quality was crappy, and I’m, like ‘it’s 2006, it’s not really gonna be good’ to be a smart ass.

But I feel like I get it more on my personal Facebook…more sarcastic amusement. Some sharp-witted people, but we’ll be exchange it equally so it’s not really trolling. It’s more in fun.

What advice do you have for other creatives on how to promote on social media?

Don’t always give into paying. As long as it doesn’t annoy the shit out of anyone, try to tag as many people, bands, etc. Even just tagging bands in your text, Facebook will pick up on it and say “this page you like has been mentioning this conversation in this post by this other page.” So I can pick up some extra traffic that way by tagging a band or a musician in the text. Just tag and share.

On Instagram, use hashtags, tag bands, anything to try to get their attention as long as it’s a good picture and don’t spam them.