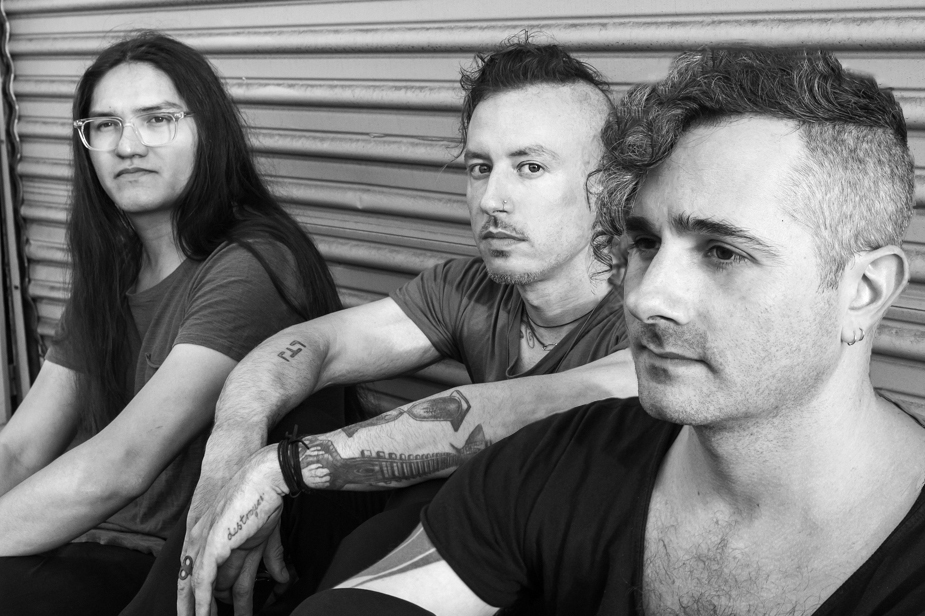 If I told you there was a band called The Black Queen and it was fronted by former Dillinger Escape Plan vocalist Greg Puciato, what genre of music do you think they would play? You maybe guessed it: moody, synth-based pop.

However, The Black Queen isn’t necessarily what you would expect. The band’s guitarist and co-sound designer, Steven Alexander, found that out the very first time he tried to find his record in a record store. “I remember going to Amoeba, it was really the first thing I did when the record came out. I was excited to go see my record in a store. The guy at the store said they had several copies, but I couldn’t find it. Then, finally, someone goes, ‘Oh, I know where it is,” and it was filed in black metal.”

Jacob Unterreiner: One thing that stood out to me on the record was the intro groove on the song “No Accusations”. It was just so hypnotic and wonderful. How did that section come about?

Steven Alexander: That song originally was at a completely different tempo and had an entirely different vibe. We already had a lot of slower stuff on the album so we ended up changing it. I think Josh (keyboard player/producer/sound designer) and I were proponents of saying, “Ok, let’s make this more of a dance-y track.”

Josh started coming up with the beat, and I reinterpreted what I already had, because I had a full demo, which was this slow kind of thing. That happens a lot, often times we will end up having 3 or 4 different demo versions of the same song. Maybe at some point we will release all of them, I don’t know.

The demo took a long time, but once we changed it up, the song came together very quickly. We redid the song in basically one night.

On that song, because the verse groove is so tense, it sets up this great moment of release when the pre-chorus section comes in. Was that the plan from the beginning or did that come about on that night you redid the song?

That pre-chorus section was an entirely new section that wasn’t in the original demo. It was a necessity in order to have a release section that alleviated that tension.

It’s interesting, originally, at the end of “Lies About You” the song went into what ended up being the intro of the record. So that was all tagged on as one song. The piano line, or the synth line on [No Accusations] is one of the same presets that we had made for “Lies.” We thought it made sense to have that sound come back later in the record.

Another moment on the record that floored me was on the song you mentioned, “Lies About You.” About halfway through the song is a crazy sawtooth or white noise synth that kind of overtakes the track. How did you guys come up with that?

Yeah! On that record there’s a lot of guitar stuff I did that was not conventional. That’s a guitar…I believe through an old Boss or Roland processor from the 80s–I can’t remember what it is–with some weird harmonizing effect. Then that goes into a Eventide H-3000 and then, finally, a Moog ring modulator. That’s kind of the panny stuff going on, the really fast modulated tremolo type stuff.

Personally, I find it really cool when noises like that can have such an emotional impact. Like it’s not a melody or a harmony, it’s just this intense sound that shakes you a little bit.

Yeah. That was kind of the idea of that. At that point in the song there is all that soft, nice, bell-like synth stuff going on, and then that was like, “How can I answer that with something more bombastic and crazy?”

The record definitely has some strong 80s throwback vibes to it. I’m curious, how do you guys use that nostalgia without feeding into in a detrimental way?

Basically, I always have this thing where stuff that I tend to gravitate towards has this…timelessness.

So, even though people will say we sound 80s, or synth pop–and I see some of the similarities, but not a lot–I don’t like things that are really kitschy. There’s so many synthwave bands who use, you know, the neon grids and a Delorean driving by palm trees. That’s too kitschy for me and a little cheesy.

We do like a lot of 80s stuff, but I don’t want to rip off the whole vibe. We take pieces from it. One thing that helps too is we build almost everything [synth sounds and tones]. Sometimes if it is called for to have an 808 sound, we’ll use it, but I’d say 90% of the sounds we use are hand built. The synth sounds, guitar patches, and vocal chains, all that stuff is hand built.

A lot of the synthwave bands aren’t necessarily doing that so they end up sounding exactly like the 80s sounded like. It’s a little disingenuous.

I have this thing…take Star Wars, for instance. You don’t know what year Star Wars is in. It says it’s a long time ago, but there [are] spaceships and things. I like things that feel like they’re a time capsule that could have been from the future or from the past.

And that leads perfectly into my next question. I saw in an interview that you and Greg [the singer] had both mentioned that films are a huge source of inspiration for your music. Was there any films you were referencing as you were creating this album?

Well, for the song “Impossible Condition,” the demo for that was originally called “Stalker.” I don’t know if you know Tarkovsky. He’s a Russian director who made the original Solaris. But he also did this movie called Stalker. It’s super moody, it is extremely slow–it’s not for everybody. But I love the visuals in that.

The basic story is there is three main characters who go to a place called the Zone where they get a wish granted if they can go through it. The Zone is kind of a place I was talking about earlier–you can’t tell if it is the future or the past–but they try and go through it and it’s really dangerous.

The idea for the song [Impossible Condition] is the song progresses like that. They’re traveling, and they get to the Zone, which might be the section where the song changes halfway through, and then after that the music gets weird. Then at the very, very end that’s the outcome of the trip through the Zone.

I maybe tend to try and fit those conceptual ideas into the music more than the other guys. Usually, I’ll hear something Greg sings, the lyrics, and I’ll go, “Ok, I know what the song is about,” and I’ll go back and re-approach different sounds, maybe make a piano sound more soft and decaying, or make certain things larger depending on what he’s singing.

Along similar lines, you’ve spoken in interviews about your love of video games. If Infinite Games had to be a soundtrack for a video game that already exists, what video game would it be and why?

Oh man that’s hard. I don’t know. It’s kind of strange. It’s not long enough to be an RPG, but it feels very RPGish. Some of it feels very Final Fantasy to me even though it’s not as melodic, or I don’t know, maybe symphonic is the word. It definitely feels like an adventure–the whole thing is one piece. So I’d have to say some sort of Final Fantasy type game.

It’s definitely not a game where you just beat a level and it gives you a screen, and then you go to the next level, and you get a screen. It has to has to be a more continuous type of thing.

Another comment you made in an interview that really intrigued me was you said you often fall in love with things you might not understand on the first viewing or first listen. What are some examples of things you didn’t understand at first, but then later came to love?

I think Stalker, the movie I mentioned earlier, is an example. I think I had to watch it about 3 times, and it’s a hard movie to get through. It might be 3 and ½ hours long, and it is very, very slow, like glacially slow. The first time you don’t like it. I was like, “ehh, I’m never gonna put this in again.”

Another movie I absolutely fell in love with, and I don’t watch it very much because it’s harsh, and it doesn’t put me in a good mood is Enter the Void. I was watching that about the time we put out our first record [Fever Daydream]. I remember watching it once and thinking, “Ugh, I hate this.” Then I put it on another time and was really intrigued by it.

I fell in love with [Enter the Void] one night when I ate some mushrooms and watched the movie again, high. Visually, it is very colorful, and I read later on that he used a different frame rate to capture the strobey effect that is going on almost the whole film, which is pretty jarring. I also heard in the soundtrack he put a low ringing tone that humans might not be able to hear, but it’s just this rumble that is supposed to be disorienting.

The next evening I went to a bar, and the director, Gaspar [Noe], walks in with these french weirdos, in fact one of his friends had a bird on his shoulder, I just looked at them and I was so confused by them. They actually didn’t even order anything, they just hung out and then left. I gave him a head nod at one point and he just nodded back to me. It was almost like I dreamt that or something. 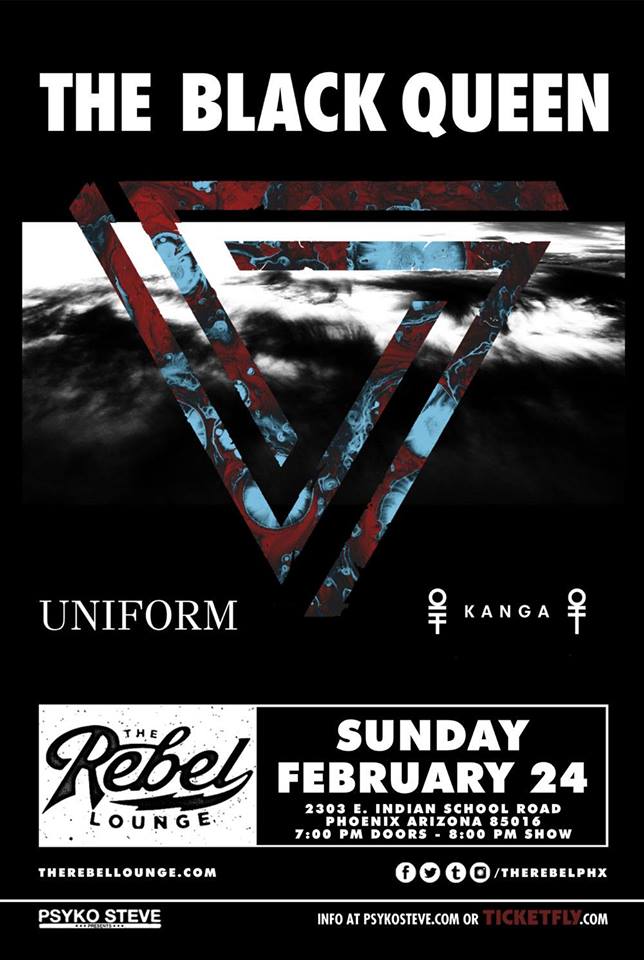