In the span of a tumultuous four years, I’ve found my life-path joyfully, yet exhaustively consumed by the world of music journalism.

While there is no shame in practicing your passion (even if it means cramming yourself into someone’s living room with a used Nikon and other 20-somethings to watch someone play pop-power-folk-punk-noise-beach-rock), there’s no truer form of exhilaration than stepping outside of your comfort zone and writing about something you wouldn’t normally cover. In this case, it was Episode 3 of Say What?!, a series produced with the intention of showcasing queer performers and storytellers in an intimate setting, in this case, The Listening Room Phoenix.

I caught up with Cole Travis, host of Say What?!, to get the skinny on this up-and-coming concept and he explained, “The series has been running since February 24th, 2018, and I just wanted to give a unique performance space to queer artists where they can be comfortable touching topics or sharing experiences they wouldn’t have done in other spaces/shows.”

“Say What?! features and will always feature an all queer cast of comedians, visual artists, and bands with predominantly LGBT+ members. I would love to branch out and create other shows that feature people all across the sexuality spectrum, but I feel like Say What?! needs to focus on this group of folks.”

Coming from someone like me who had spent many of his years in dark, dank, small venues in an effort to get that lick of a rush live music can give you, The Listening Room was a large departure from many of the “DIY” venues I’ve attended in the past. When using the term around Cole Travis, he was quick to deviate the differences between this venue and others around it, “I wouldn’t call The Listening Room Phoenix a DIY venue at all.”

“We specialize in providing an intimate acoustic venue free of distractions (like food or drink services) with full audio and video recording/mastering capability. We always have our video technician Christian and one of our audio technicians Paul or Matt at each of our shows to record multi-camera video and audio that performers use to release live albums or create promotional material.” 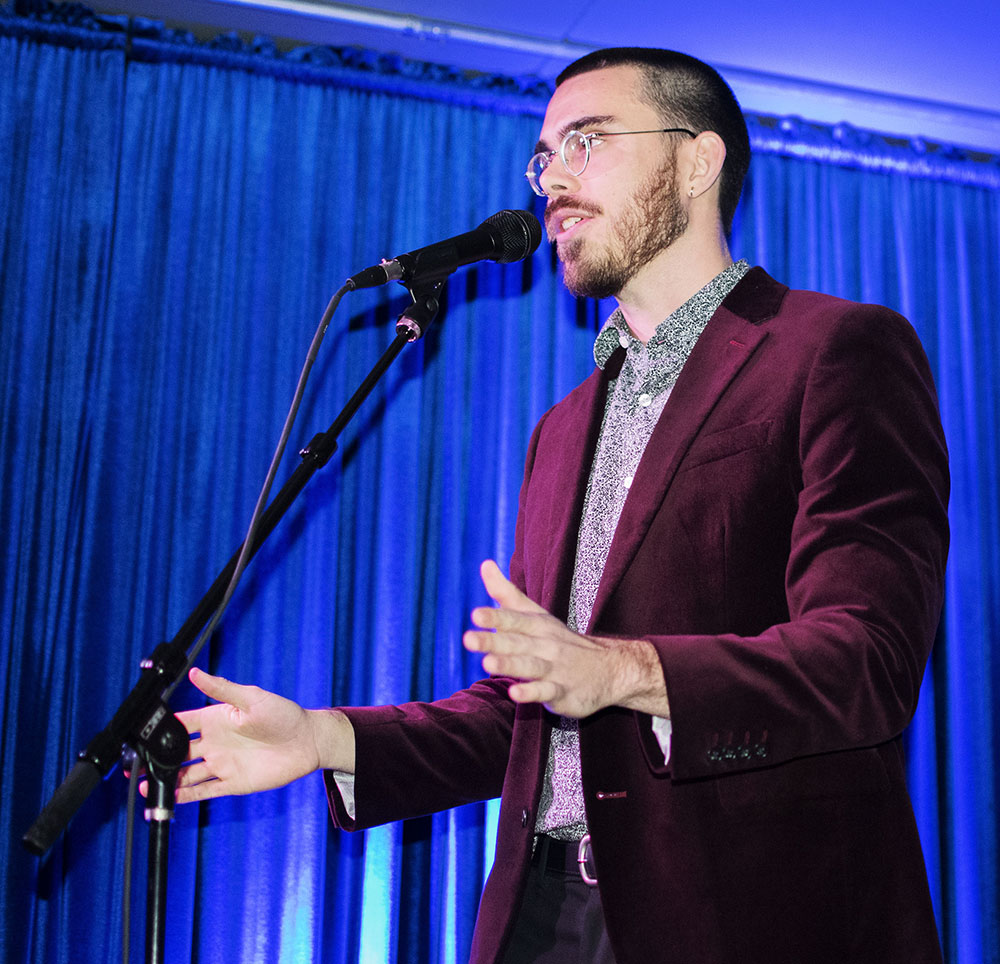 He also explained the original goal of the venue was meant to focus on acoustic singer-songwriters, but the versatility of the venue allowed them to host acts as diverse as jazz bands, large groups, meditation sessions, motivational speaking, and namely tonight, LGBTQ+ focused events. Nestled in a small, Phoenix parking-lot, attendees might raise an eyebrow on the red-carpet-esque entrance leading into the private space; inside, tastefully-dimmed fluorescent lights illuminate a multi-purpose room with chairs and a modest stage adorning the venue’s namesake behind it. As a writer who is a little rough around the edges, this room with organized intention let me know they weren’t fucking around.

As the crowd filled in, I took my spot in the back with a date after conversing with stand-in “house band” and virtuoso music duo, Michael Oden and Matt Oliverio of Vintage Clothes. I was indeed prepared for a night of comedy and laughs, but I was not prepared for the strong emotional backing many of the performers brought to the stage. Before Cole Travis began his set, Vintage Clothes regaled the crowd with a short set, then playing between performance interludes.

First on the lineup featured host Cole Travis warming up the crowd and informing us on his own queer background, before divulging into an ill-experienced-yet-hilarious psychedelic journey on mushrooms. As someone who spent most of 2017 ingesting LSD, mushrooms, and DMT with his best friend, I can safely attest Travis’s account was endearingly accurate. Instead of relying on the cartoonish tropes of “woah, man, this is crazy,” Cole gracefully segued from abstract moment to moment, revealing the humanity within us all. As a performer, Travis projected the friendly candor of a boy-next-door who happened to lose his way, mostly by happenstance. This lighthearted-but-pertinent tone would be a foil to the more emotional performances that would arrive during the evening.

“I love being the center of attention on stage, but there is something equally, if not more gratifying when you can step back and see an audience enjoying a show that you organized and made happen. I definitely found my creative voice long before I started making this show, but my time MC’ing and performing on Say What?! has made that voice more mature and honed.” Travis attested. 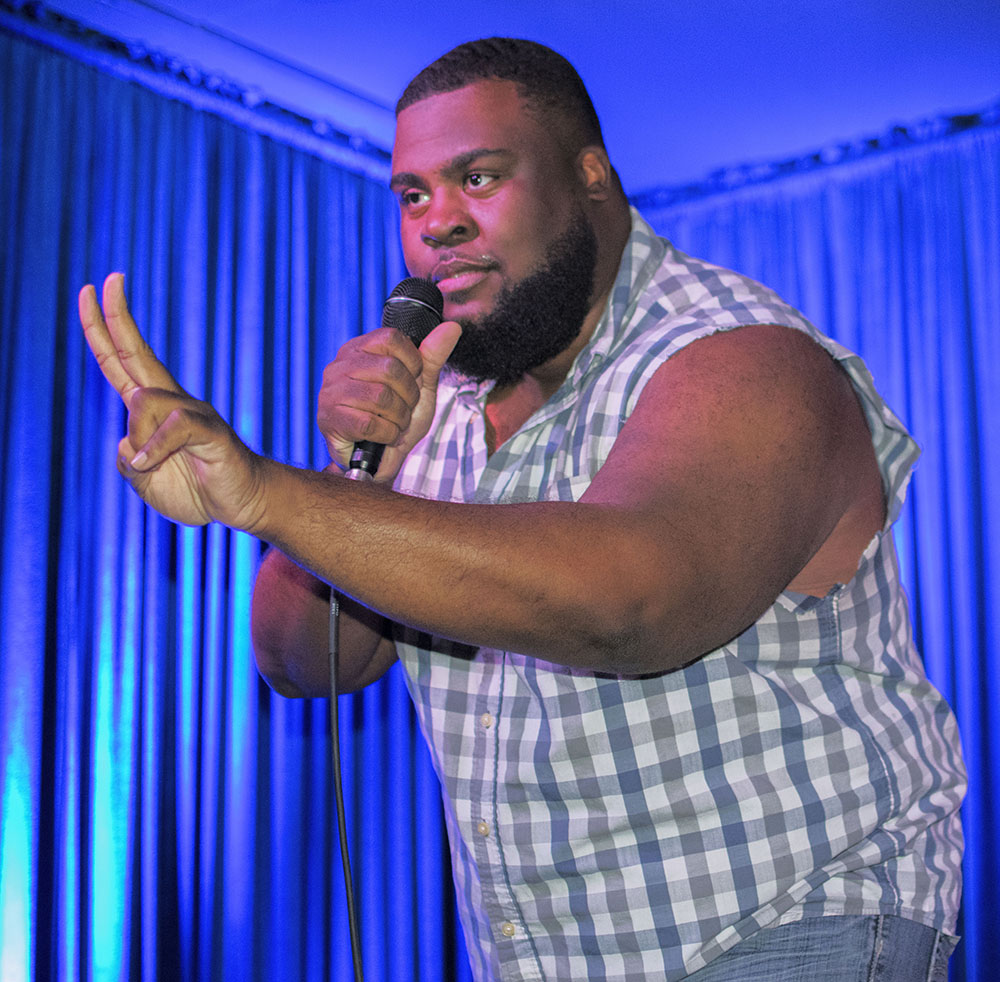 The bold-and-bawdy Raymond Howard took the stage in unapologetically casual wear. Quick to the sex jokes and cringeworthy (but deviously enjoyable) material, he contrasted the relatively platonic content of the night, but still made his queer experience the focus of his story. Relating many of his experiences to the stereotypes he’s endured, Howard brought a contemporary comedic approach with shameless queer identity. Instead of projecting a cold, sardonic entendres to his life experiences, Howard made no effort to conceal the truth behind his life stories and relaxed, Southern approach to his stand-up. While he sweetened up the audience with blunt, clever language, the aura of The Listening Room suddenly shifted into Howard’s living room, as we felt like we were one of his friends over at dinner, listening to his truthful-yet-offbeat remarks on the human experience. His act was also rife with LGBTQ+ language and references; it was refreshing to hear a practiced, queer comedian not police their language for fear of possibly offending the audience. 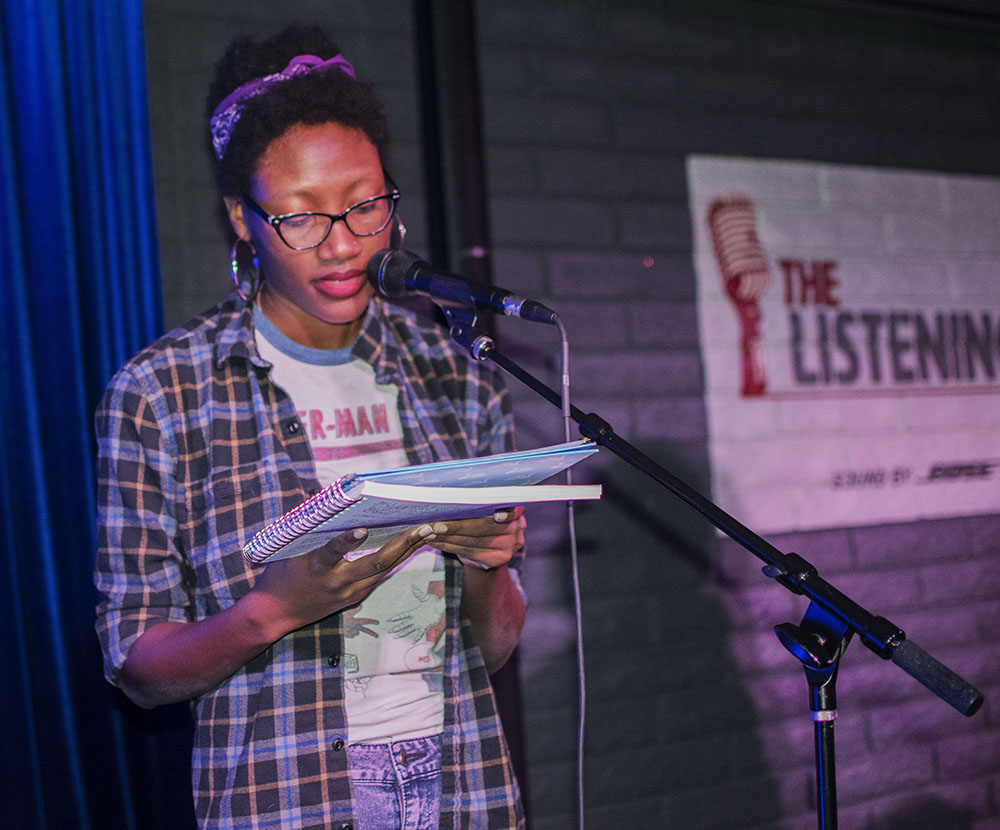 After Raymond left the stage, a modestly poignant Trejon Dunkley approached the spotlight with notebook-in-hand. As Dunkley explained her background as a comedian, she openly expressed to the crowd how, on this night, she wished to do something different. Instead of an average set, Trejon Dunkley began reading from her notebook under the guise of short-story fiction: contained within was the story of “Sista Man”, an emotionally abstract tale of a queer individual who was loved by their peers, but further rejected by society as a whole.

As the story drew on with increasing emotion for the struggle of her main character, I became journalistically frozen, standing by the stage among the sitting crowd. I felt like a complete ass-hat interrupting vulnerable moments with the flash of my camera, and felt compelled to just stand and absorb the story Dunkley told. “Sista Man” was a different queer “stroke for different folks.” Here was an unconventional tale of a queer individual and gender identity which transcends the usual tropes of “everyone hates them because of -blank-.” Instead, Dunkley offered an alternative where Sista Man was indeed loved by those around them, by his partner, and by his chosen community, regardless of their differences. The loss of their partner Daisy, and later, Sista Man themselves, was much less about the characters, but more so as a symbol or representation of what the readers looking-in could grab from it. Even with the adversity Sista Man faced from the naysayers, the story began and ended with the theme of love and comradery. 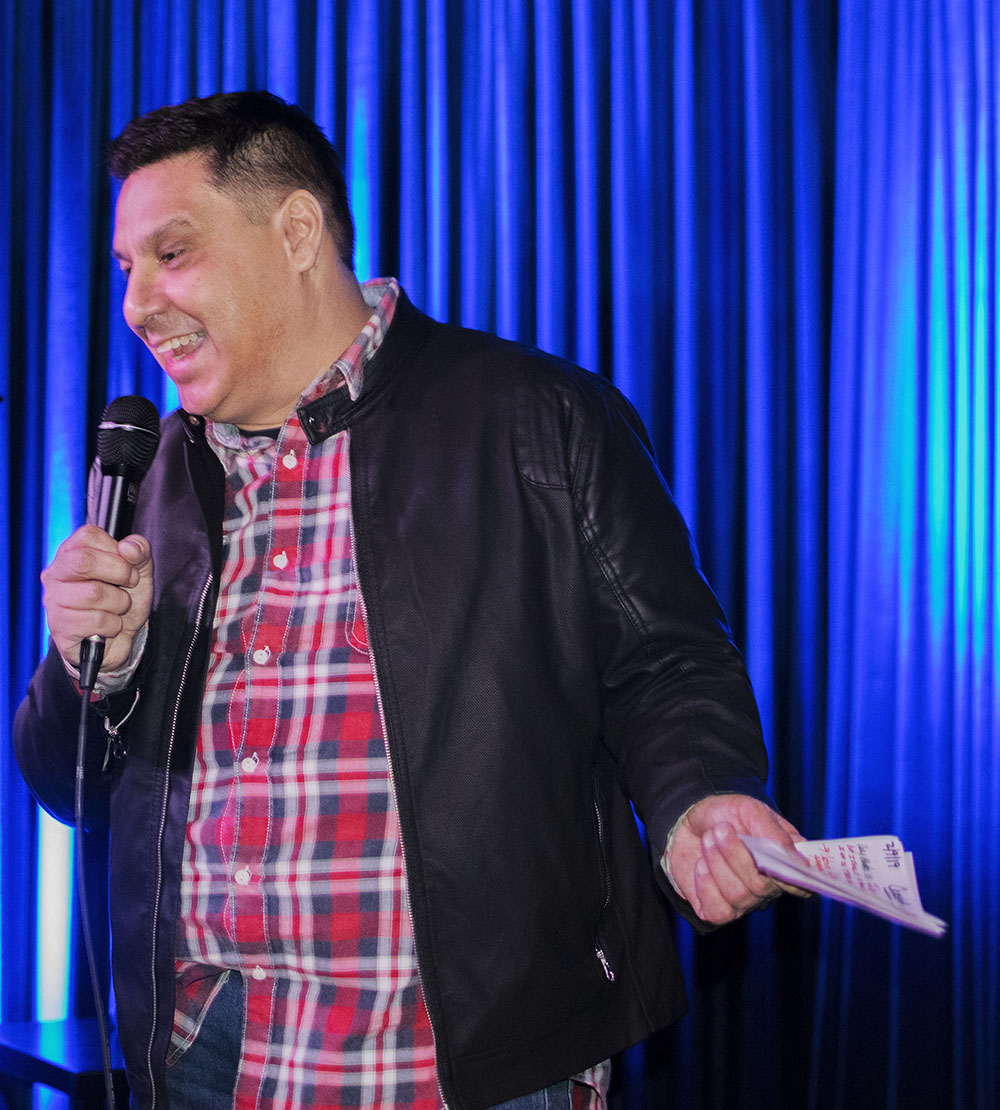 Trejon Dunkley left the stage to an extremely warm and teary-eyed reception, promising more laughs from the celebrated local Phoenix queer comedian, Gene Moore. While I was expecting more laughs, it was clear that Ep. 3 of Say What?! was a complete departure for some of these performers. Moore began his set confidently, but slowly accessed deeper emotions inside of him as he spoke of his own experience as a gay man, and how it related to his family. In an emotional, yet organized rant, Moore highlighted the importance of being true to yourself, loving your family when they might not love you the way you see yourself, and most importantly, tuning out those who doubted him because of that sexuality. In a flurry of anecdotes related to his family life, his set ended with the important message of how being a comedian solidified his own identity:

“And if anyone see’s my family in the streets, and they ask, ‘How’s Gene?’ Let them know I am doing great!”

While this was a slight paraphrase of the emoted ending-points to his set, the message resonated all the same to those who have experienced rejection from family as a queer individual. 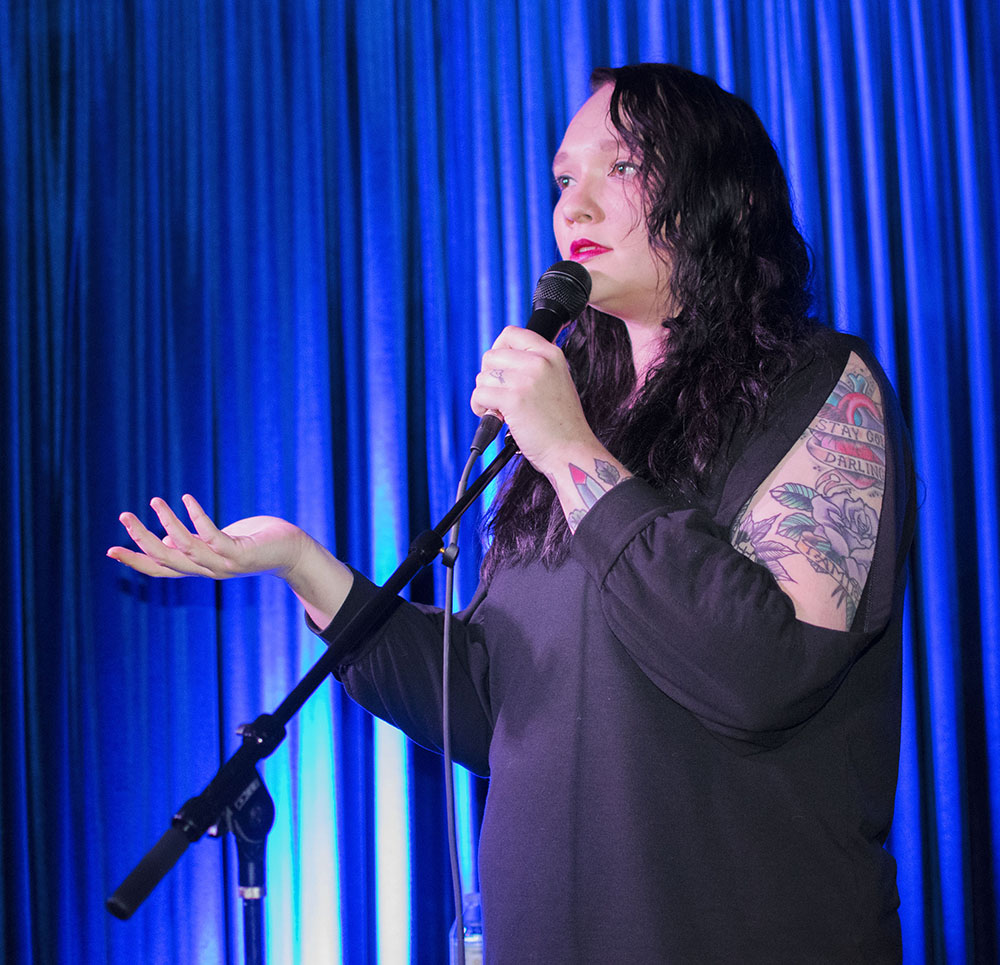 In the second-to-last set, Courtney Wahlstrom, stand-up comedian and producer of The Bro Show took no time to bullshit, and set aside her comedic bits for a diatribe on the loss of her mother to suicide. This was not your average lambast and regretful diatribe on the loss of a family member to suicide, but also a celebration of her mother’s life. While she did highlight the complex emotions related to the death of her mother, Wahlstrom framed her suicide in a much different light: here was a strong, forward-moving bulldozer of a woman who spent her life doing impossible things with her time, and making it up equally in personality. Her mother was not simply another statistic or a stereotypically depressed individual, but an actual human being filled with humor, wit, drive and power who fell victim to the powers she could not harness. I’m sure it took Wahlstrom a good deal of time to process these emotions enough to bring it on stage and telling her side of the narrative was nothing but cathartic for the audience.

Without missing a beat, Wahlstrom masterfully segued into her comedic portions, with cringe-worthy tales of warning regarding her relationship with an older man, and her life after. As someone who was taken advantage of older men at a young age, I truly felt the exact place she was coming from. Most of the time, you aren’t a “mature 16 year old,” but a victim to somebody who doesn’t always have the best intentions. In the vein of comedian Morgan Murphy, Wahlstrom delivered a dry tone underlined by comedic, biting truth Daria would be jealous of. After smoothly ending her mixed-emotion set, headliner Ernesto Ortiz began and ended the evening with rapturous laughter. 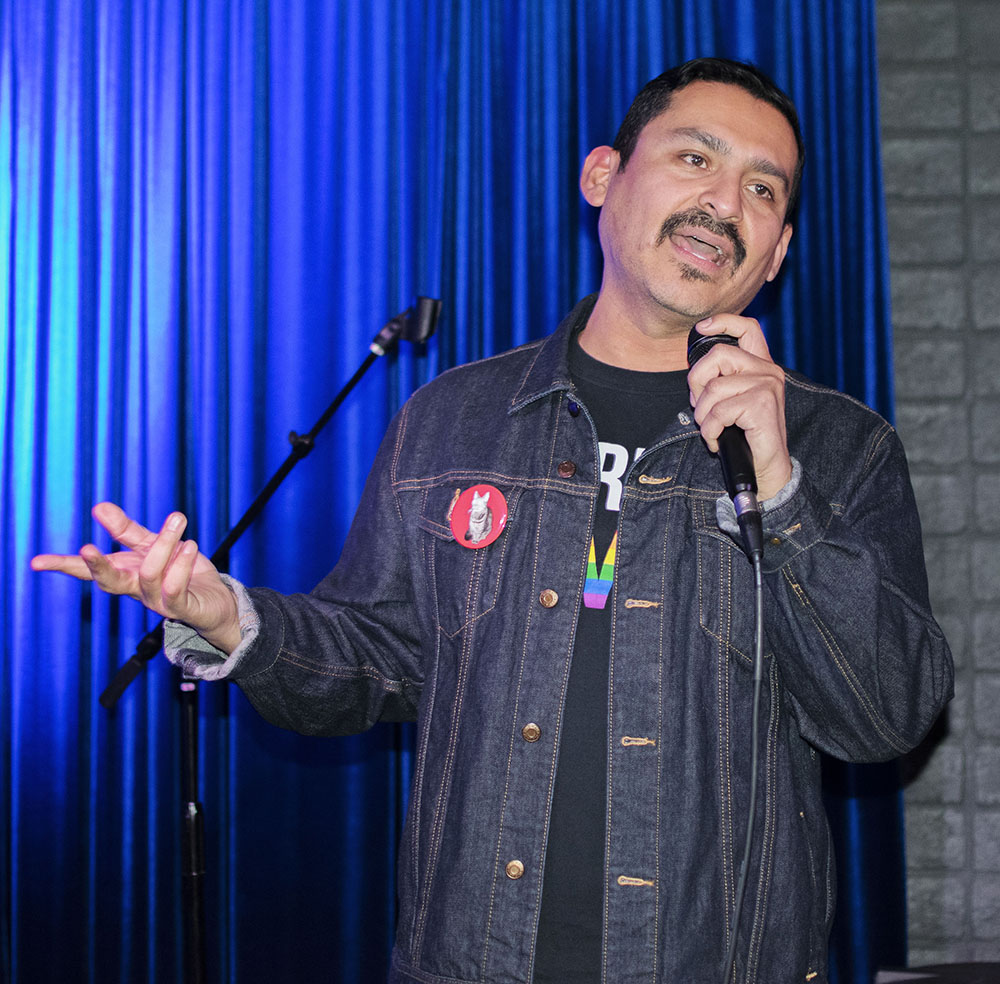 Instead of going the darker route, Ernesto highlighted his tale of sexuality by asking the crowd, “donde estan tus pantalones?” or in English, “where are your pants?” In discovering his newfound sexuality in his youth, Ernesto divulged about the close relationship he had with his father. In the midst of young Ernesto looking to go to school with little extra cash to suffice, he was given the idea of working at a local Phoenix strip club to suffice. After a few uncomfortable moments on his first day with a handsy older gentleman described as “those dudes who wear knee-high white socks” and a penchant for young, Latino boys, the story climaxed when young Ernesto busted his entire thong in front of the club, and how his father felt he “earned” his tuition after graciously-yet-hilariously absorbing the story. As someone who doesn’t have the strongest father figure (a trait shared by many queer individuals), it was a refreshing take to hear of a young, gay youth who did.

The night ended in a brief two to three hours with a performance from Vintage Clothes and an outro from Cole Travis. For the first time in a few months, that strange sense of longing I have after shows suddenly disappeared, and the mixed comedy of emotions satisfied my strange lust for culture.

Keep up with Say What: Storytelling and Standup on Facebook. 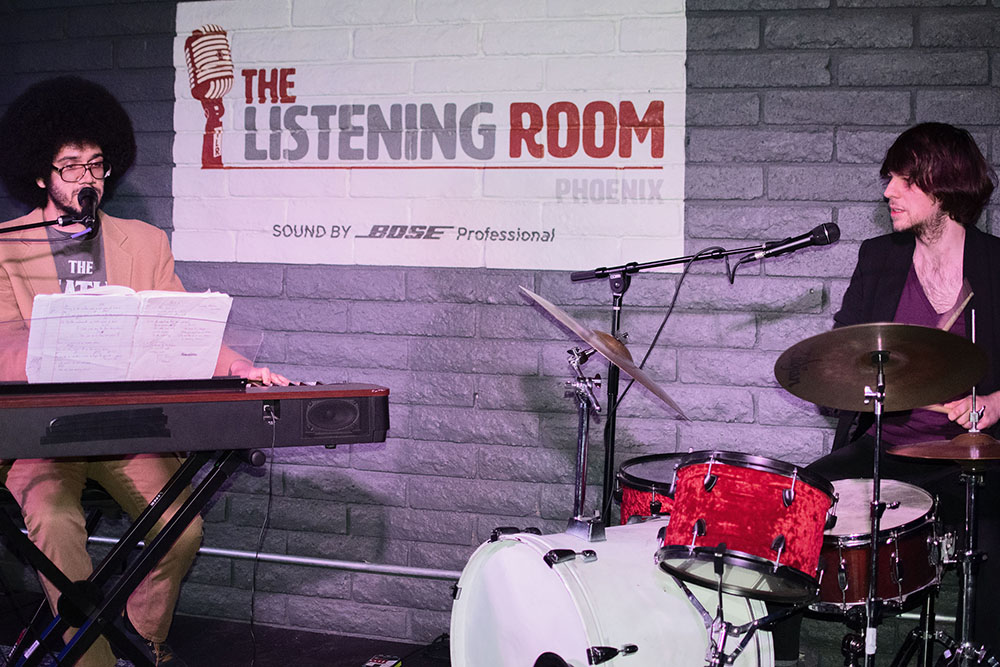 *** Note from editors: So, The Listening Room Phoenix is one of our promotional partners, but neither Logan (the writer) not the folx involved with Say What? really knew that going into this piece… or maybe they did… whatever. It’s a [big] small town. There’s crossover sometimes. We just want to be responsible and acknowledge the crossover but this is not a “sponsored” post. Do what you will with this information. xo, Carly + Mark