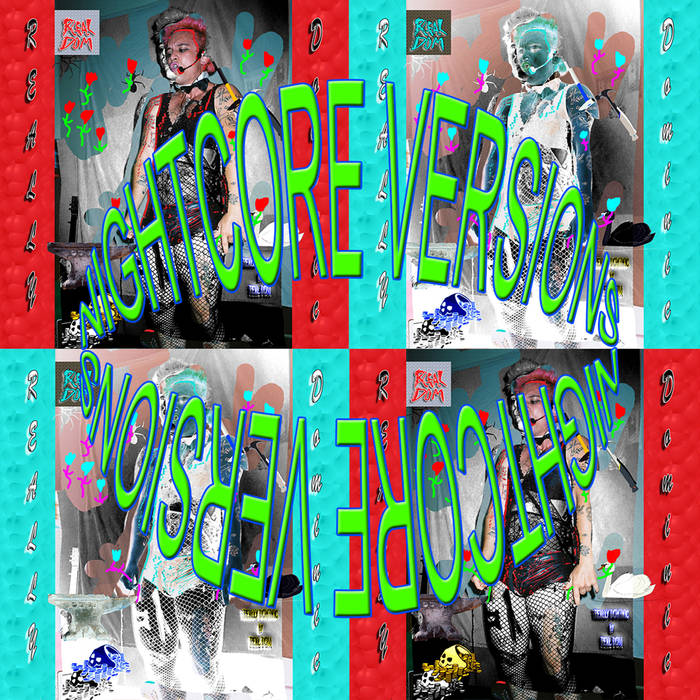 When Dom Rabalais or “Real Dom” from Iowa made his appearance at Aaron Ponzo’s Soda Review hosted at The Trunk Space on along with Bxnshy, Curt Oren, Belly Eater, and Yipee!, I had no idea what I was witnessing.

It was a night filled with anxiety as I witnessed an electronic artist sit in a chair for the duration of her set, mixed with the emotional one-man show of Curt Oren saddled up on stage with his projector and saxophone. I legitimately pondered, “what else would this night possibly bring?”

Well I sure found out when in front of me unfolded a mixture of well-planned gritty visuals on a projector along with a gentleman in his (presumed) late 20s working the floor like he was paid to work the floor at one point. Within the mix of gender bending pageantry, intense vocals, trained-yet-seductive choreography, and stark reality painted among fantasy were vibrant, 8-bit dance tracks at its core. The new wave-esque vocals reminiscent of Scott-Aitken-Waterman euro-pop production frequently blended with oddball vocal samples and simple foundations scattered among his discography.

Real Dom recently took his sugary, frightening hooks to the next level when he remixed his former albums into ‘Nightcore’ editions featuring re-done tracks focusing on the speeding-up of pitch and tempo on the original songs, including the album of interest for today’s review, Really Nightcore.

With four albums behind him and three of his most recent in re-released Nightcore form all out on the same day, I decided to review Really Nightcore out of the others since the timeline of the original album, Really Dominic coincided with the time I caught his act.

Like his former title-styling, this new remixed album features small parodies in title of the former. As if I was transported back to my early raving days in 2009 at the tender age of 14 when HappyCore was the genre of the moment, “nothing comes for nightcore” begins the album like 2007 Youtube intended it. With his vocals pitched raised and the tempo engaged, the same drama found on the original version of the track can be found in the amphetamine-like mix of jittery speed and well-executed lyrics. Sounds start to break the mold by the third track titled “the nightcore that we made ourselves” as the first, honest “ballad” comes around followed with “cross my nightcore” featuring Rob Apollo bringing back the faster swagger.

I can’t deny I was apprehensive as I decided to review an album from his catalog. While I am familiar with the sounds and style, I had no idea these sped-up, remix versions of original dance tracks had an identifying term. Not to mention, Dom’s show was so well-thought and soundly-constructed, I could instantly identify he was a man with a plan and could possibly take my personal interpretation the wrong way since this project seems like something close to his soul. Behind the campy production are haunting tongue-in-cheek lyrics that come from somewhere I can’t identify. When “been nightcored” featuring Bait Crush makes its intro, the entire genre elements you experience before are flipped on their side with its nu-metal influence, while “reverse nightcore” takes the original themes of longing full circle.

Real Dom contains an enigmatic mix of mystery and openness: here in front of you is an emotionally well-read musician who isn’t afraid to display the “Real Dom” dressed in lingerie while belting out lyrics, but even after watching him perform or listening to his albums, you’re not quite sure which parts Dom showed you were the real ones.

Instead of investing in a “sadboy” acoustic guitar and projecting his feelings through indie pop songs he took the less-trodden path and forged his music among a disguise of simplicity. The lyrics behind the upbeat sounds surely describe a struggle he has had with himself, but there’s always a little bit of a metaphorical devilish smile which doesn’t make you question his authenticity, yet makes you wonder when the persona in front of you begins and ends. “make it night and core” reminisces in dramatic power-ballad chords, but the vibes are completely serious when you listen to the context of the lyrics, with “so much left to nightcore” closing out the album unlike how it started.

Maybe these questions I have just show the genius of his branding: I clearly am yearning to understand the Real Dom, but I’m left with only more questions. The compositions are straightforward concepts upon first listen, but the lyrics and cues show a mastery of what he truly wants out of the final product. Really Nightcore is unapologetic in emotional brevity, but can rip the tablecloth from the table when you least expect it.

However, I probably shouldn’t try too hard to strip away the fantastical aspects of Real Dom and his discography — after all, people who break down the tricks of musicians don’t make the experience more palpable for the audience. We came here for the pomp and circumstance of the act, and even this most blunt and honest of one-man shows contains a plethora of lighting cues and scripted events. Who am I to try and rip away the curtain when I don’t even know the magician himself? This is not the work of deception, but simply an alternate reality he has painstakingly crafted out of the very real elements of himself and what goes on in his headspace. Really Nightcore truly is, Real Dominic.