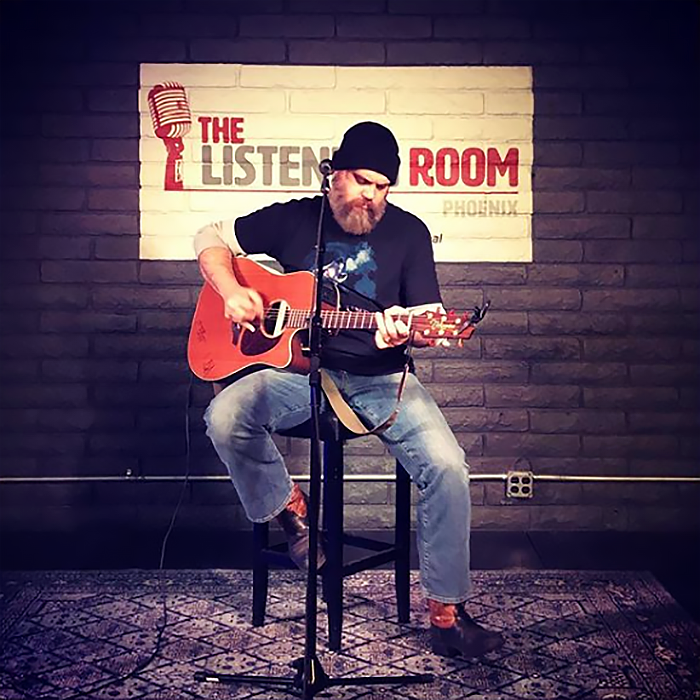 Jim Bachmann swung through The Listening Room Phoenix and tore the house down with “Poor Man’s Son”. Please enjoy this performance and more as part of our “Songs from The Listening Room” series every month as well as a Q+A with Jim below…

Also, make sure to check out The Listening Room Phoenix website and calendar for an upcoming performance you should attend: http://thelisteningroomphoenix.com/

So, please tell us a little about the song you chose to perform. When did you write it? Anything prompt its creation (although you explain this in the video, if you wanted to get any more in-depth with the answer, this would be the place)?

This song was inspired by a young kid I met with a huge tattoo on his arm that read “13 1/2.” I asked him what that was all about and he explained to me that it meant “12 jurors, 1 judge, and a half-ass chance.” He must have been 18 years old and already seemed to have a pretty good grasp on his calling in life. This kid probably never had a chance, but he seemed like a good kid, just misdirected.

The rest kind of followed the path from birth to death – finding hope in tough times – doing what you need to do to get through. When you’re a kid they tell you that you can be president if you want. It took a little while to get the song out. It started with a different chorus that actually made mention of 13 1/2 and his explanation. It ended up on the cutting room floor but I’m still hanging on to that idea.

My process is kind of all over the place. I tend to follow what leads me for better or worse. Shiny things… What seems to happen the most is that I’ll sit and play the guitar or bang around on the piano and if something grabs me or feels good, I’ll turn on my pocket recorder and try to catch the idea so I don’t miss it. Going back to those ideas doesn’t always happen as fast as I’d like to though.

I don’t sit and write as often as I feel like I should, but I’m always trying to push it forward and complete the thought. I’ve got years of unfinished songs bouncing around upstairs and sometimes they fall out, sometimes they stay in there until they’re done cooking. I think to do it well though you have to write all the time.

How much time do you have?

Some of my favorites that are still cranking out music today are guys like Hayes Carll, Sturgill Simpson, Kev Russell from Shinyribs, Jeremy Pinnell, Ryan Adams, Tom Vandenavond, Willy Tea Taylor.. The list can go on forever though.

Locally there are so many great songwriters here in the Phoenix area, you don’t really have to go far to find great ones that inspire me. Marc Oxborrow, Nolan McKelvey, Blaine Long, Chris Orf, Hank Topless out of Tucson, Mikel Lander from the Sugar Thieves… they’re all doing really great things. Even with all those names I’m sure I neglected about 1,000 more that are no-brainers for me.

I’ve got a couple irons in the fire at the moment. I’m working with Sean Cooney at 3-Leaf in Phoenix making a record that should be done hopefully early Spring 2019.

Catch Jim Bachmann live February 7 at Roosters Country opening for Billy Don Burns, and at the first ever Humdinger Festival at the Mesa Amphitheatre on February 23.