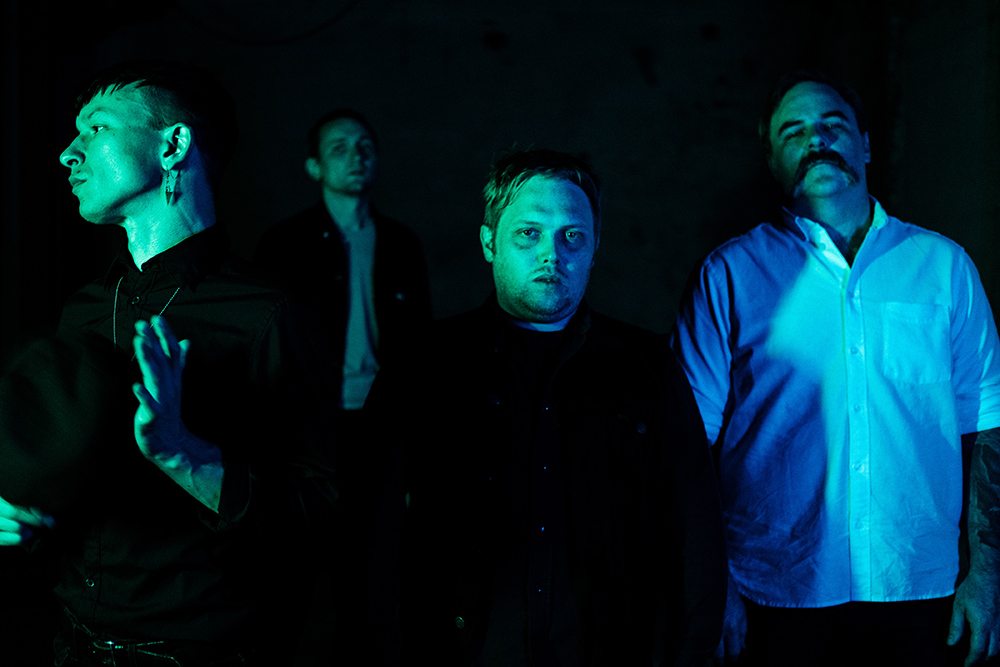 All photos by Reid Haithcock

In 2003, Daughters played a show at the Mason Jar (before it became the Rebel Lounge). They were opening for Dillinger Escape Plan. Daughters’ drummer Jon Styverson recalls, “I remember the line to get in was wrapping into the street. I don’t know why it was in the street, but it was, and a car came by and hit like 4 people. It was terrible. After the show, I was at the merch table and these four kids came up to me in bandages, with blood all over their shirts–they’re the ones who got hit. They got released from the hospital and came right back to the show.”

This story tells you all you need to know about Daughters; they have fans who get hit by a car before the show starts, go the hospital, and manage to make it back in time to catch the set. It is not a leap to say the music Daughters makes is the soundtrack to brushing off the blunt force trauma of a car accident.

I sat down with drummer Jon Styverson ahead of the band’s March 1 show at the Rebel Lounge.

Jacob: As I was listening to your latest record, You Won’t Get What You Want, one of the things that really stood out to me was the quasi-samba drum beat on the song “Daughter.” How did that come about?

Jon: We approached this album in a couple of different ways. Some songs were absolutely 100% completed in the practice space and ready to go. Other songs were demos that we were kicking around and we knew we would have to form those in the studio.

I think that song [Daughter] was about 90% of the way there [when we got into the studio], but the drums…I hadn’t been able to wrap my head around them yet. Our guitar player, Nick, he writes almost all the music, and he’s a drummer as well. That drum part is kind of piecemeal; it’s two drummers trying to figure it out from the control booth.

Seth Manchester, who recorded the album, also has some drum experience–so maybe it was three people in that case. We had a solid, four-on-the-floor, easy drum structure and we knew we needed to add more to it. We just kind of layered beats on top of each other and we liked how it came out.

It ends up being kind of two separate drum parts. It’s a real bitch to put together to get ready for performance, but it’s one of my favorite beats off the record for sure.

On a podcast I was listening to, you said in the studio you recorded the drums and the cymbals separately, which is really unique. Why did you do that, and what was the effect it achieved?

We didn’t do it for every track. But we did that on some tracks. Parts of this record, as I said, were very piecemeal. We recorded half of it [the album] thinking that was probably all we needed. Then we listened back to it and said, “We need more.”

We started digging back in and writing, and the writing process, for us, is probably the hardest part. We all live in different cities, and we all have really busy schedules. When we came in [to the studio] Seth had an idea for a song which became “The Reason They Hate Me,” and basically he wanted to go with complete independence. He wanted to record a drum and not have the cymbals bleeding into that mic. So he can blow the sound out and bring it back.

On a song like “City Song,” those drums almost sound digital, but those are real drums. The only way to be able to affect a drum like that is to have complete independence. So that’s the kick recorded by itself without a snare drum next to it, without any other drums being hit around it. When you do that, you’re able to tweak the sound dramatically.

Because we came into the studio with a question mark over our heads on some of these songs, Seth thought it would be a good idea to basically build up a bank of everything we might need in order to play with things on the other side of recording.

We didn’t want to be sitting there saying, “Shit. I don’t know what to do, and we can’t really affect things because we did everything live.” We had complete control. If, while editing, I wanted to take out all the cymbals, I could have. It just came out better that way. We recorded a lot with him [Seth] and I really enjoy how this one sounds versus the last couple records. They all sound good, but this one in particular [is special].

Going through recording just toms, just snare, just kick, just cymbals, it was time consuming, but you can hear the difference, and I really enjoy that.

You mentioned that you all live in different cities. In the short documentary you guys released about the making of the album, you all talked about how difficult it was to organize and get in the same place. Do you think the record would have been even better if you were all in one place?

It’s possible. I really don’t know. I have no idea. We had no idea this record was going to be received well and we were so happy we even got a record out. We crawled all the way back to square one when we decided we were going to make another record: we had to find labels, we had to do everything. We’ll never find out if being closer would have made for a better record, but it’s possible.

Another thing that stood out to me in that documentary is you said you had so much trust in Seth that he had the green light to come to you and let you know that parts you had written wouldn’t record well. Was there any part in particular that you remember him dissuading you from playing on the record?

There was. There was a couple of insane drum parts that I needed to dial back. I could have recorded them, but he’s watched me make this mistake before. [Speaking as Seth] ‘Yeah it’s impressive and yeah, it’s fun to hear, but think of the logistics of, you know, this is song 7 in the set, and when you get to that part, you are not gonna have the energy for the rest of the set. That one four second part that you have a crush on is just gonna destroy you.’

He’s not wrong. Some parts also didn’t necessarily serve the song. It served me, you know, I wrote it. Seth is one of the only people who can look me in the eyes and just give me a thumbs down. It’s not censorship or anything, he just helps me serve the song.

Honestly, he’s right, there’s some things that I wrote that are just–if I was frozen in a block of ice, and I was 26 years old every day I could come out with the energy and I could crush this song. But I’m 38, my back hurts when I wake up, I get muscle spasms, I’m grumpy, and tired. I don’t want to play that part that I wrote. Seth is seeing that for me, which is rare. 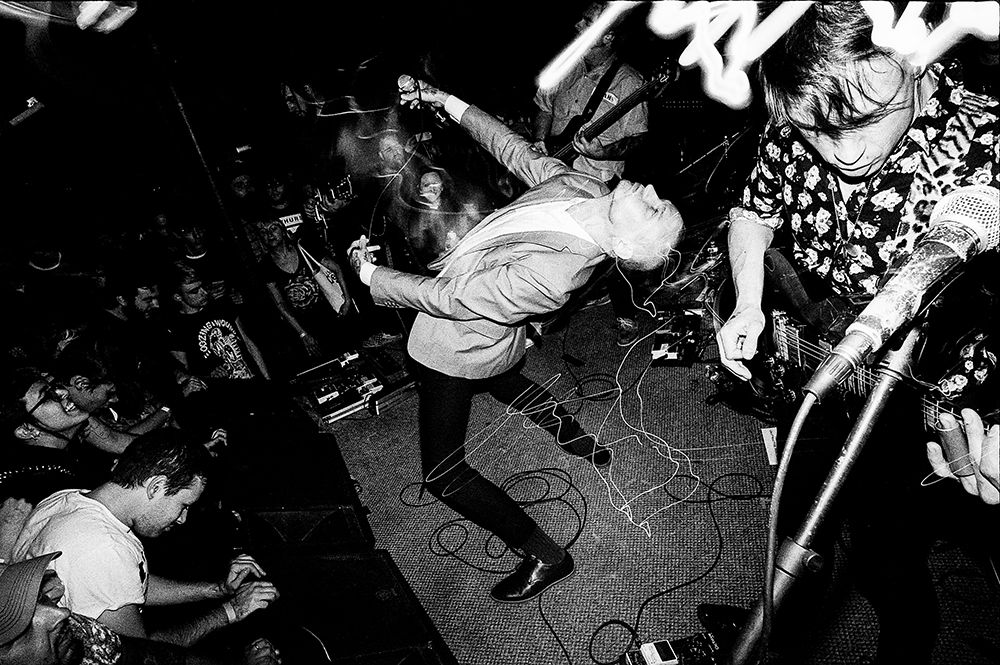 To be clear on what you said, that wasn’t the only reason we were doing it, but it was funny. It was funny to think we had that much power, that we’d created something that had that much disgust to some people. I would hate to say, “We’re a dangerous punk band and we’re important because we’re dangerous,” but I do feel we have a good amount of energy and our show isn’t boring.

I think it is important for punk bands, or bands in general, to engage…not shock…not a shock value thing…but engage…and maybe disturb. I’ve referenced this band before, but I saw the Cramps once and it was terrifying. It was awesome, they were just–holy shit that guy is the real deal–I remember being young, and just scared.

I was never able to see GG Allin, and that may be being a little too much. I still think to keep punk music in its place–just the essence of punk–it’s important to engage. Danger is good for live music, for sure.

You said the Cramps terrified you. What did you learn from that fear?

The Cramps didn’t have the best gear, they didn’t play very well, they weren’t always in tune, but it was just how they carried themselves. It was unreal, it blew me away. I was not prepared for it. That show always stayed with me.

If I play live with a band, I hope we have a small fucking percent of that. I don’t think you can force that, that’s just something that happens onstage when a group gets together. I can’t carry myself “cool” on stage and expect that result. There isn’t necessarily anything quote-unquote “cool” about the Cramps, even though there is, but when those guys get together and start playing music at you, something changes. I wanted whatever the fuck that was, I can’t identify it still, but I wanted a piece of that.

Daughters went to great lengths to pursue that kind of energy, which has to be exhausting on some level. Was there ever a time when you looked up from the drums, saw Alexis [Marshall’s] penis, and were just like, “Come on, not tonight.”

[Laughs] That stuff was mostly a while ago, but there’s been shows where he’s been missing vocal cues and I look up, and something…a little…wild is happening. I don’t know that I was ever bummed out by it, but I’m sure there were times when I was like “Ah man, we were doing so good.” [Laughs]

Sometimes he could get the audience worked up and we could do anything. We could possibly pull a GG Allin and it would work. Those were very special, rare moments where we’ve connected so much with the crowd and they’ll let us do anything, and they’ll be happy with it.

Most of the time, I don’t think he was making an error in judgement or anything, he just went that way, and I thought, “Oh, here we go. Maybe we should cut a couple songs.” It never made me mad, there was just a couple of times when I didn’t expect to see what I was seeing when I looked up.

Check out Daughters’ new album You Won’t Get What You Want, and see them live March 1 at the Rebel Lounge.

P.S. After the interview Jon said if you were one of the four kids who got hit by a car outside the Mason Jar in 2003, he’d really like to talk to you.