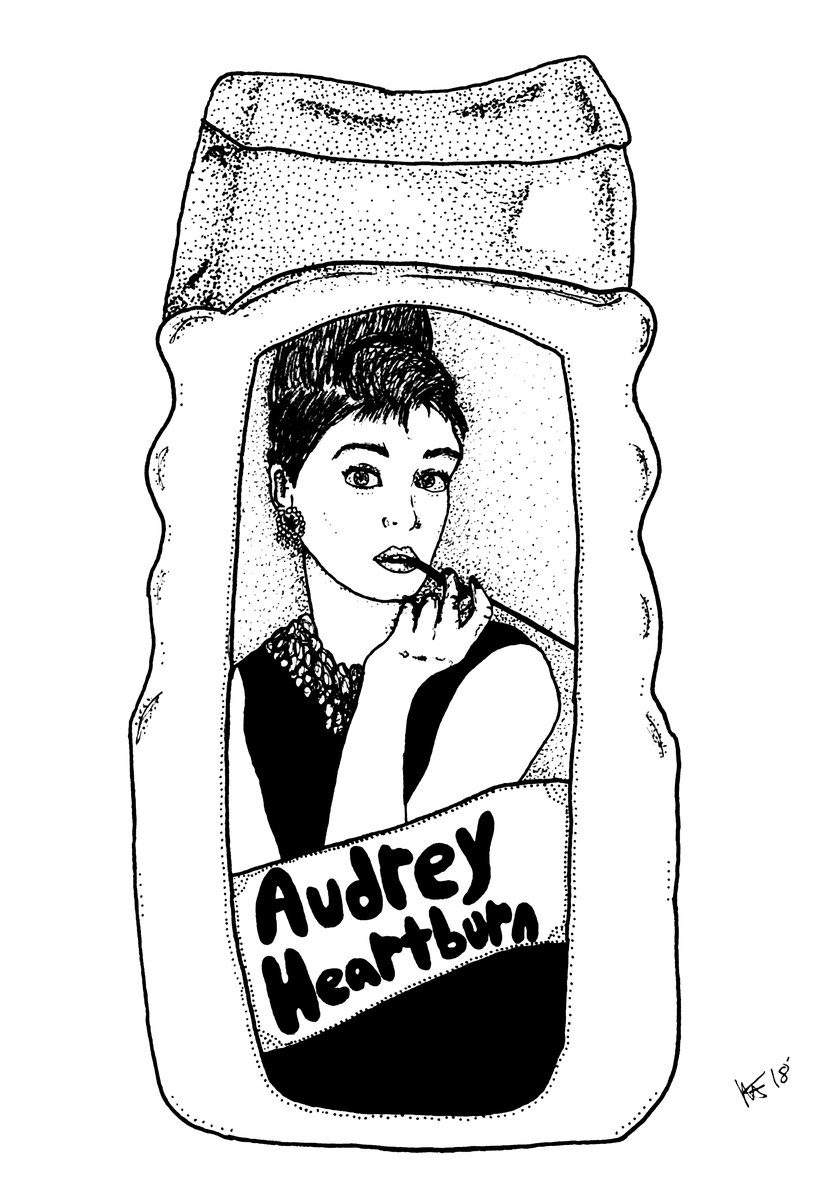 I remember attending Endless Bummer 3 last summer and meeting Salah Moharram and Sophia O’Malley like it was yesterday (and I can’t even remember yesterday). Although I had yet to see their joint project, Audrey Heartburn, it was one of the more quaint personal interactions I had between the energetic sets I caught that day: all three of us trading jokes and discussing bands and musical nuances. I promised myself I would attend an Audrey Heartburn show, but that day had yet to materialize before their debut EP, released on December 13, 2018 would find its way into my meaty claws. The three-track punk-hearted companion crosses a few genre lines, but is noteworthy for its clean composition, artistic intent, and well-timed cues.

From the beginning of the EP, Dressing Room begins with a rough edge featuring an endearing intro recorded with what sounds like a potato, before proceeding into a stark, dance-rock-pop melody with a well-mastered sound. “Squeeze Me” features the first time we hear lead vocalist Sophia O’Malley and guitarist and co-lead vocalist Salah Moharram sing in unison — which follows this trend for the next two tracks — cementing them with fun, well-paced, catchy melodies.

After a little dance with the entry track, “Maybe One Day” carries on this trend of genre blending, but focuses on more acerbic punk delivery in both the instruments and the vocals than “Squeeze Me,” and contains a backing-riff which reminded me of the main guitar melody from Heart’s Barracuda. The continuing trend of Audrey Heartburn seems to be comfortable bouncing between modern rock, punk, and pop, but always goes back to tight instrumentation which highlight the meaning behind the writing.

“We were trying to be sorta balanced with our EP,”  confirmed Salah Moharram.

“It’s three songs long: the [first tracked is called] “Squeeze,” a repetitive, almost silly song with a dancey groove. [With the second track called] “Maybe One Day” we wanted to show our slam side, [while] “Believe” is proggy almost like a story.

Instead of going the average “Arizona punk” route of abstract concepts, spur-of-the-moment emotion, and surprise through shock value, the shock from Dressing Room stems from the professional quality and control it possesses. Sophia O’Malley and Salah Moharram later helped me fill in the blanks with how this tight ensemble came together:

“Zac and I played in a band together early in high school, and James went to school with us as well. I met Salah through the drummer of another high school punk band I was in, and a few years later we all managed to meet up and start jamming somehow,” exclaimed O’Malley.

“I’ve tried to get this band together with a number a different lineups, probably 4 or 5, since Mid 2016; around November 2018 is when I get James, Zac, and Sophia together, along with our initial guitarist Joe, and we just clicked,” added Moharram.

“As for sound, we definitely have a punk edge. James and Zac come from a Metal background, while Joe played lots of punk around The Valley for years (Leonardo Dicapricorn, Cooper’s Revenge, Sonoran Chorus, etc); but I find the actual music is secondary to the theatrics,” said Salah.

“Believe” certainly confirms their intention for a “proggy” direction and slows down the band a few tempos than the former tracks in the beginning. Clocking in at a full 5-minute romp, Salah rejoins Sophia in unison with New Wave-esque backup vocals that would make Kate Pierson from The B-52s cry (with joy of course). Later transferring into a slightly dance-ska-indie-pop conglomeration, Salah gives the vocal impression of someone arguing with their spouse while justifying their emotions, with Sophia’s vocals guiding the track between the ups-and-downs in tempo. These changes give way to a few good breakdown moments, and I imagine this is a well-cherished hit in a live setting.

“We write around a set of emotions or vibes we are going for as opposed to trying to stay confined in a genre,” said Salah.

Ignoring the technical aspects, Dressing Room never wanders away from the heart of the project; like a good meal from a Crock-Pot simmering for 10 hours, there’s signs to suggest this EP took quite a while to fine tune, and the effort behind it shines. While “Squeeze Me” and “Maybe One Day” are certainly care-free in tone, “Believe” shows the potential of what could happen if they took the emotion in their studio-vocals one step further: there are certain segments when Salah — dare I say — sounds almost “Broadway” in spirit, and if that emotion was further developed, could result in some interesting future tracks where there could be more raw surprises.

The technical know-how, musicianship, and comradery of the group is there, but if it was to be combined their raw passion with a slight penchant for breaking some rules of music, Audrey Heartburn would have their brand and sound signed, sealed, and delivered for years to come.

“It was a very small world type situation, and since we are a group of many different musical backgrounds, it worked out way better than I ever could have anticipated,” says Sophia. “My favorite thing about being a part of this project is the variety of musical styles we cover; it keeps us all on our toes and we have lots of fun doing it.”