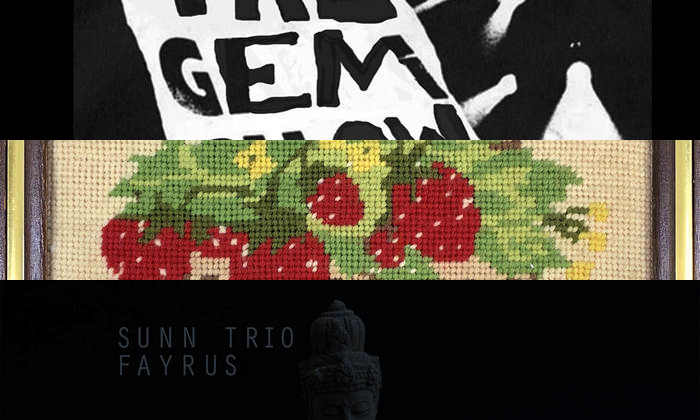 I don’t know if anyone is as excited as I am about this album. I mean, there are probably some people personally vested in its release that might match me in excitement level… but honestly, have any of them had the song “Trouble” stuck in their head since July 7th? I think not. Point is, I’ve been eager to get my hands on this new release from Tucson act, The Gem Show, for some time and now I can. And, lucky for me, there are a number of really rad songs to fill out the album so I don’t just have to listen to “Trouble” on repeat for the rest of the week, even though I was totally ready to do just that. However, the nearly five minute closer, “Nobody Noticed”, is quickly gaining rank amongst the other tracks… and then there’s that kitchsy thinkpiece, “We All Live in the Ketchup on the Wall”. Basically, it’s hard to play favorites on Meet Yourself.

Plus, Jim Waters of Tucson’s Waterworks Studios provided mixing, mastering, and “spiritual guidance” on Meet Yourself and we think that’s pretty neat too. This Tucson trio with a totally unsearchable band name should be on everyone’s new music watch… we just don’t know how to tell you to follow them.

This fresh new album is bright as a clear morning sky or a fistful of balloons. Inspirational Strawberries, the buoyant indie pop album recently released by Wyatt Blair through Lolipop Records, might offer a nod to 1960s psychedelia but it’s crafted for modern listeners. “It’s Yesterday” starts off the album with some of the most polite pysch-rock we’ve heard in a long time. But don’t start thinking a good attitude translates to bad music making. Au contraire, mon cher. Wyatt Blair’s music fills you with an overabundance of good feels as you frolic through the lush soundscapes of Inspirational Strawberries.

This is a great album for driving around with the windows rolled down on your way to the beach on the Monday you just decided to up and quit your job. But don’t let the carefree attitude that pervades the album distract you from the serious musicianship in the underpinnings here. Early favorites include “(Stuck In A) Daydream” and “Won’t Back Down” but you should definitely dive fully into the sunshine warmed pool of sound that is Inspirational Strawberries by Wyatt Blair.

The new album from Sunn Trio came out last November and almost escaped our attention (gasp). Thankfully, we made up for that initial oversight in time to still land a copy on vinyl (and maybe you can too). The instrumental band (which features much more than 3 members) is in exceptional form on their latest release, Fayrus. This avant-garde musical act of “people making sounds” continues to push the envelope of western music into an easterly direction with sound, mode, and structure taking a distinct Near-East feel. If the words “experimental” and “drone” don’t scare you away, then this album should be explored. This isn’t your run-of-the-mill jam session. Fayrus isa subversive aural experience that merges jazz, psych, noise, and that sun-bleached Sonoran-style surf into one unified, but constantly shifting, sound.

There’s no playing favorites. You have to take Fayrus in its entirety. Start to finish. Lights out. Volume up. No fucking around.