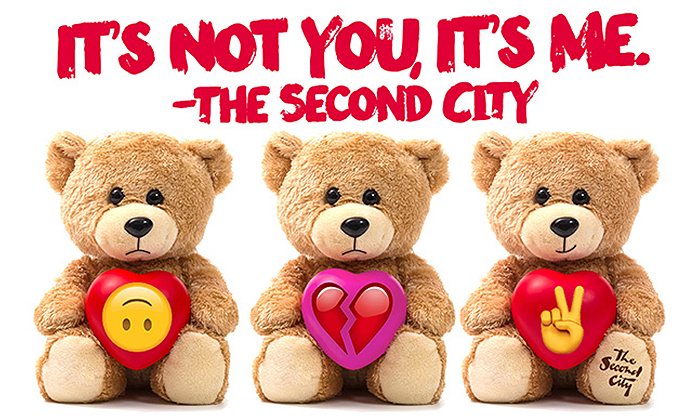 It starts with a song.

An irreverent and discourteous song. And anyone who knows me knows I’m a sucker for a waggish song. This one happens to be about our social malaise and the fronts we all begrudgingly present to each other. Golden! So I was buttered up from the outset…

It’s Not You, It’s Me is The Second City’s touring comedy revue. A series of vignettes ranging from 5 seconds to 5 minutes. Some ultra cringy. Some irreverently relatable. Some quick witted, with near-immediate punchlines. And along the way, delicious improv sprinkled in.

I fully admit, those improv moments made the show for me. Improvisation is a unique medium. My affinity for live theatre is baked into that special sauce that exists between performers and audience. The unique chaos that can only reside in the space between humans playing on stage and those reacting to it. The known unknown. Improv adds another layer. An unscripted communal component that requires a very special exchange between player and play.

For anyone unfamiliar, improvisational comedy is a spontaneous medium where the performers adapt to unplanned elements. In this case, the performers have the audience contribute to the story. A framework exists, but the most crucial components are variable. So as the story unfolds, the viewers are provided the opportunity to fill concept gaps. Often to great avail. But, as in any live performance, especially unscripted and reliant on audience participation, there is always a chance that things will go wrong. They didn’t. These Second City alums are absolutely phenomenal, finding humor in the ordinary with wit and agility.

The Second City is an iconic powerhouse. The institution has helped foster and hone the skills of some of the greatest comedians of our time. John Belushi, Bill Murray, Gilda Radner, John Candy. Chris Farley, Steve Carell, Stephen Colbert, Tina Fey, Amy Poehler... I could fill this page with names of Second City alums, a testament to the impact of the institution.

It’s Not You, It’s Me provides the glorious opportunity to spend an evening laughing, something I am sure we can all use more of these days. Aside from a couple sketches that might make you want to crawl under your seat, you will likely giggle and belly laugh for a full 90 minutes. It has sketches for everyone. Perfect for a date night, or a night out with friends. Improv done right is a luxury to behold, so I highly recommend getting out to this one.