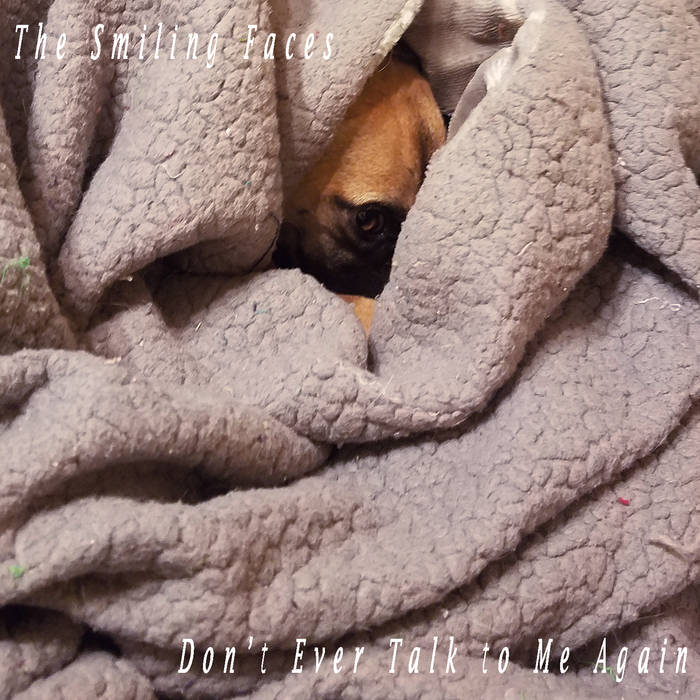 Although I had the pleasure of meeting Matt Oliviero and Michael Oden from The Smiling Faces and, more recently, of Vintage Clothes, I didn’t get the chance to listen to their August-released LP, Don’t Ever Talk to Me Again, until recently when frontman and guitarist Eric Gallagher brought it to my physical Facebook-attention. The album, which makes me feel like Dave Grohl in “Walk” both musically and lyrically, contains vocal chaos among smart, instrumental qualities Frasier Crane could enjoy.

I cannot mistake the musicianship of Michael Oden on keys when “Calm/Stop” begins the album and the aggressive, alt rock mix takes form in a slightly bluesy manner. Beginning the album with a strangely psychedelic-meets-Elton John (during his 80s cocaine binges) vibe, Eric Gallagher breaks the pattern with a solid, oddball guitar riff and abrasively shout-y vocals. Throughout the five-minute intro track, one can hone in on the mix of societal exhaustion and raw, experimental emotion Eric intended for his vocal lines.

While they might not be conventionally sound to the classical ear, Eric continues the alt-rock-meets-punk-vocals into “Devoid” as if he’s having a rather distressed conversation. At only the one minute thirty second mark, Matt Oliviero on drums shifts from conventional patterns to a breakdown before launching into the simple melody which begins behind Eric.

“Broken Back” reintroduces the themes found in the first track and once again highlights the prowess of Michael and bassist Dan Schwartz, until things slow down a nautical notch for the debut LP’s first “slow-down” moment, “Road.” Eric’s vocals soften up as he laments the metaphorical and physical “end of the road”… until the band breaks into a fun frenzy, bringing the speed and angst in Gallagher’s vocals back into the spotlight.

“It was a long process to get the band where it is now musically,” said Gallagher. “[The band] started as some basic songs I wrote as a teenager, and it took years to get that onto a stage.”

“When it did, we were a two-piece band playing at The Trunk Space once a month, just getting some practice in; I think the band started and continued to grow because of a mutual desire between myself and the other members to create something unusual/challenging, [which] still respects some pop sensibility to a small degree,” Gallagher continued.

While the entire album contains ebbs of different emotional patterns, every track seems to point back to an existential exhaustion that took years to craft. While I may not know the man behind the lyrics himself, songs like “Trap Door” and “No Patience Blues” contain an energy which displaces the “watching the world burn with a smile” mentality many rock and punk-ish lyrics tend to follow.

This isn’t a band concerned with making you laugh with dastardly clever lyrics or confirming your world-view, but speaks the unspoken narrative of a seriously disgruntled human being, who is just as angry with their situation as being okay with it. The Smiling Faces are stuck between the realm of a lyrical story brimming with a mixture self-improvement and angst, a story which could have began and ended in this album and I would have found satisfactory. Gallagher understood there was a story to tell, and his group of steadfast comrade musicians helped him materialize this fever dream into reality.