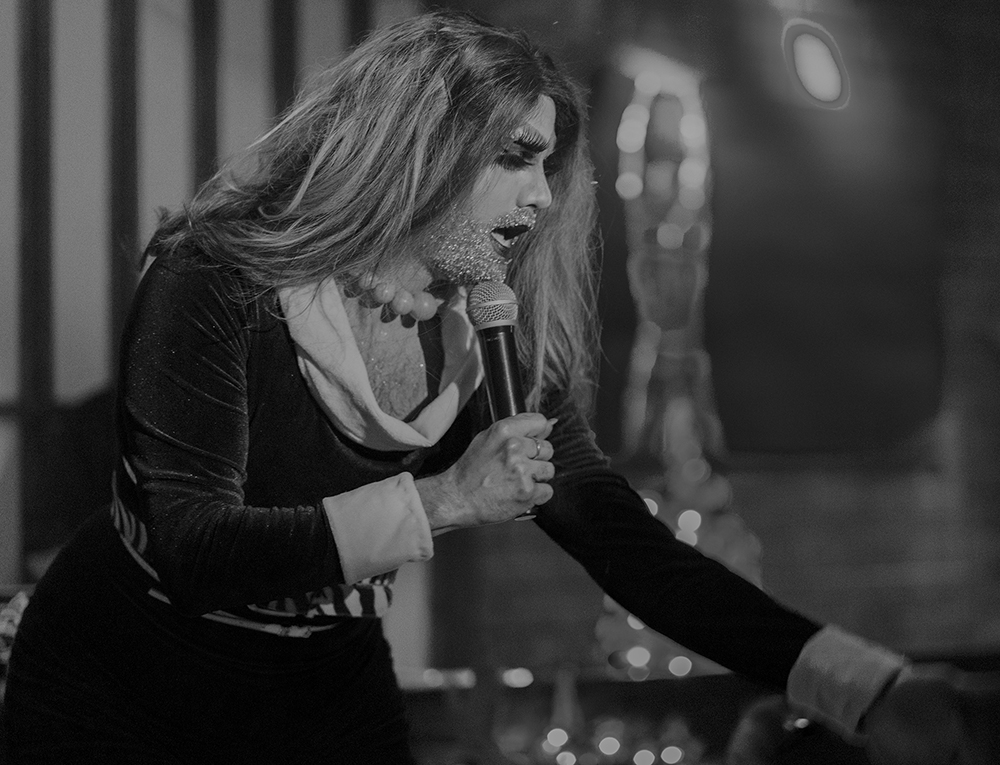 I began attending drag shows this past year part-time, but outside of taking photos and drunkenly enjoying the also-intoxicated antics of acts like Lady Christian, I felt like I couldn’t miss the opportunity to cover the December 18th DoomsDay in December w/ Doom Family event hosted by The Queer Agenda and featuring Arizona drag staple, Carnita Asada.

Although there’s a plethora of clubs and shows around the Valley at any given time of the week, this night marked a special kind of event: not only would there be a charity aspect involving toy donations for the organization, Logan’s Playground, but a cast of diverse queens offering up their goods. After being encouraged by good friend Khiona Marx (Polaroid Phoenix), I took my other friend in drag Joann Michaels in tow as I boarded the proverbial plane into a crowded Stacy’s.

Of course, Joann made sure to get ready in the last few minutes of our departure, replying to my troubled time schedule with, “drag queens are always late, if the show began already, I’ll buy you a drink.” When I entered the room, Carnita Asada was already riffing on the mic to the undeniably enthusiastic crowd, and that’s when I realized Joann owed me an expensive Bloody Mary. 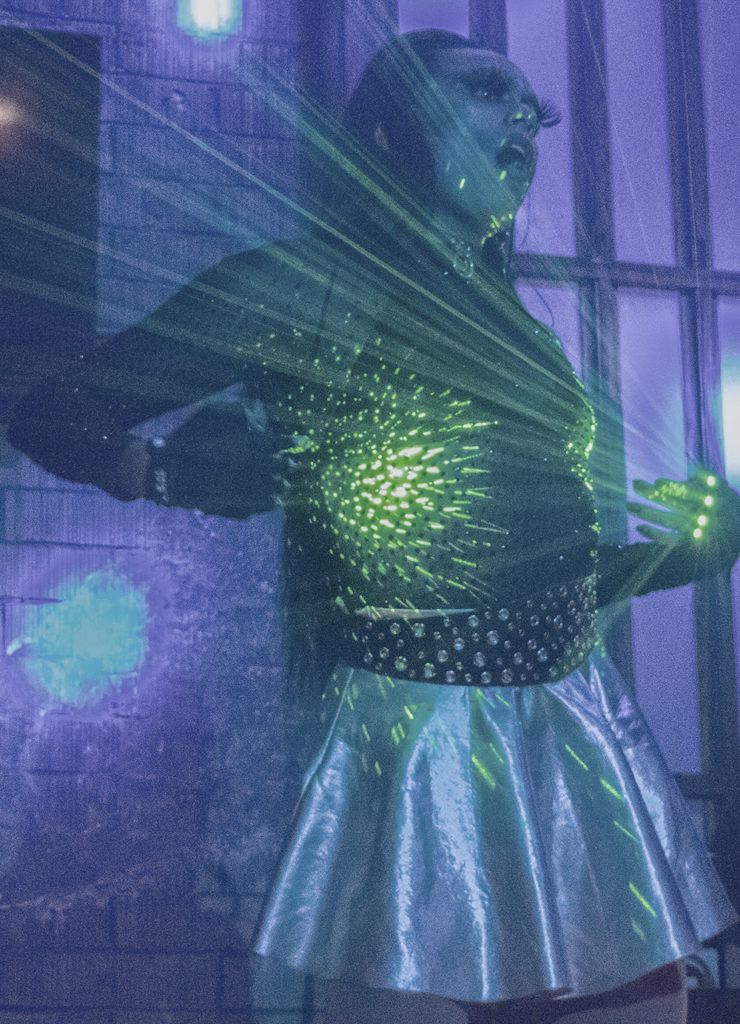 As I sipped my Bloody Mary and took pictures among the crowd during the banter, I would never forget when I attended a party at “the Bordello” (a residential gathering place for the members of The Queer Agenda) when Carnita took everybody’s phone away and I couldn’t stare at a glowing screen for two – three hours, and this was the first time we met.

I remember giving up my addictive Apple piece-of-shit, feeling naked, exposed, but also oodles more comfortable around the people around me. At that moment, and especially seeing her host between sets, Carnita reminded me much of my mother: standing before me was a woman whose motives and way of doing things sometimes seemed nonsensical, but more often than not, her quirky way of delivering good intentions usually pans out in best-yet-strangest way. Even in her performances, there is a certain grit to her drag and unapologetic attitude, but her friendly nature and concern for everybody in the crowd consistently makes it a good time.

The night was filled to the brim with fans of Dragula and drag royalty: among the queens who performed, The Queer Agenda also brought along Rubye Moore, Dahli (Arizona resident and Dragula seasons 2 contestant), Astrud Aurelia, and a bonus Stacy’s regular by the name of Gizele Milan, while The Doom Family thrusted Frankie Doom, Krustyna Clown, Valora Von Tease, and the Notorious Ali Doom into the Stacy’s spotlight. For someone who is chiefly comfortable shooting house shows and low-attendance events, my mentally-perceived pandemonium kicked into gear with the fast-fire performances, and could not calm down until my two Bloody Mary’s interacted just right with my medication. 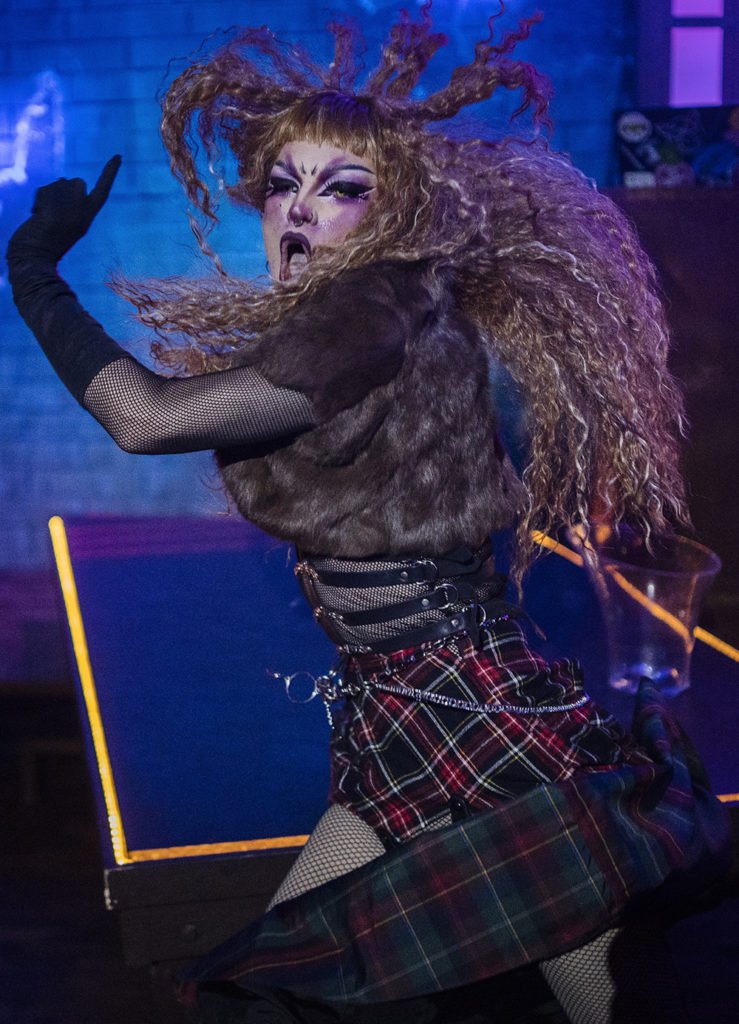 With two performances each, The Queer Agenda and Doom Family were given ample drag-time to wow the crowd with an assortment of (mostly dark and sinister) outfits and concepts, with some like the Notorious Ali Doom who chose cute numbers from the likes of Kylie Minogue, contrasted to the mixture of movie line samples and alternative hits lipped by Valora Von Tease.

Rubye Moore made smart, calculated bits of choreography by highlighting her performance with laser lights fashioned to her gloves, while a queen like Dahli offered steampunk dreads and later, “druid chic.” Gizele Milan also made her mark with some “heavy fish” and slender moves, while tonally darker queens like Krustyna the Clown blurred the lines between masculinity and femininity, taking advantage of some pleasingly scary axe-and-chainsaw prop use. 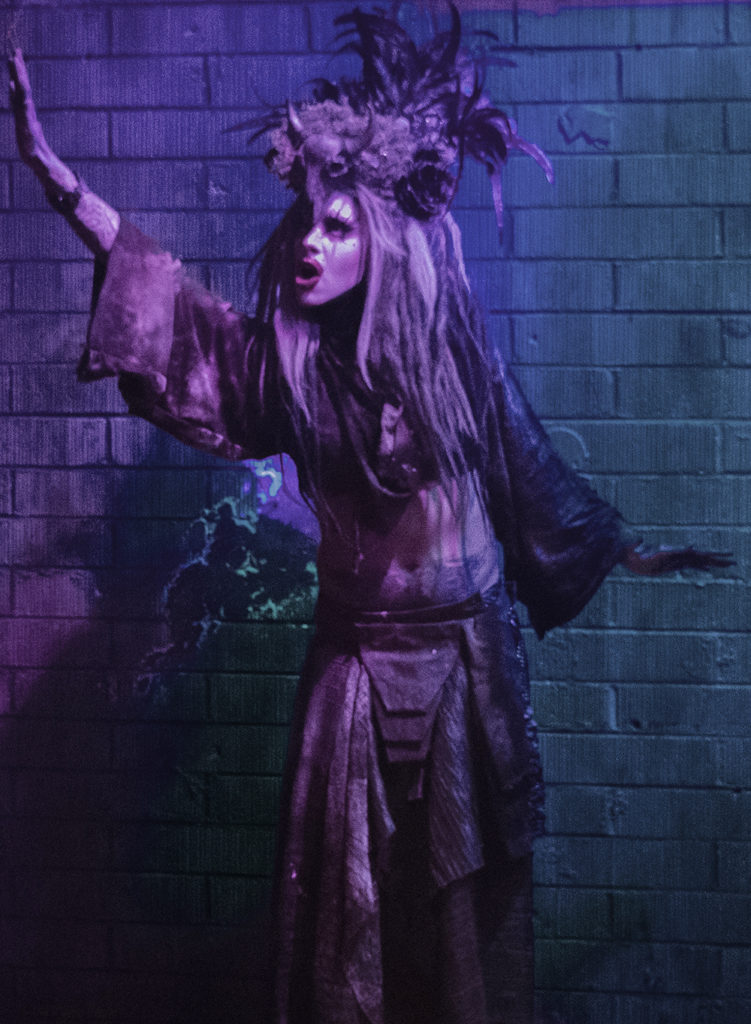 Valora Von Tease brought outfits reminiscent of a twisted burlesque, and made sure to tantalize the audience with her crotch more than once. Frankie Doom allowed the darkness to consume her, and featured performance choices swaying between “black metal” and “goth club” aesthetic depending on which part of her set; Astrud kept up the dark pacing of the night, but instead chose to don a darkness much more erratic and urban than the rest. While each queen shared her own portion of their inner darkness in staggered performances, there was always a “smiling while the world burns” sort of positivity emanating from their sets that shared feelings of camp and fear mixed into one.

Some readers might find it odd that I neglected to mention any of the song selections during their set: while I am usually more than happy to share the setlist with fans who missed the performance, I feel the way a drag show flows and the “reveals” that take place would be unfair to the Queens who try to build up these moments of suspense. Although each performance or medley involves recorded music, the tracks are frequently spliced with samples and remixed into a unique creation of their own, following the flow and helping the visual aspects come to life. 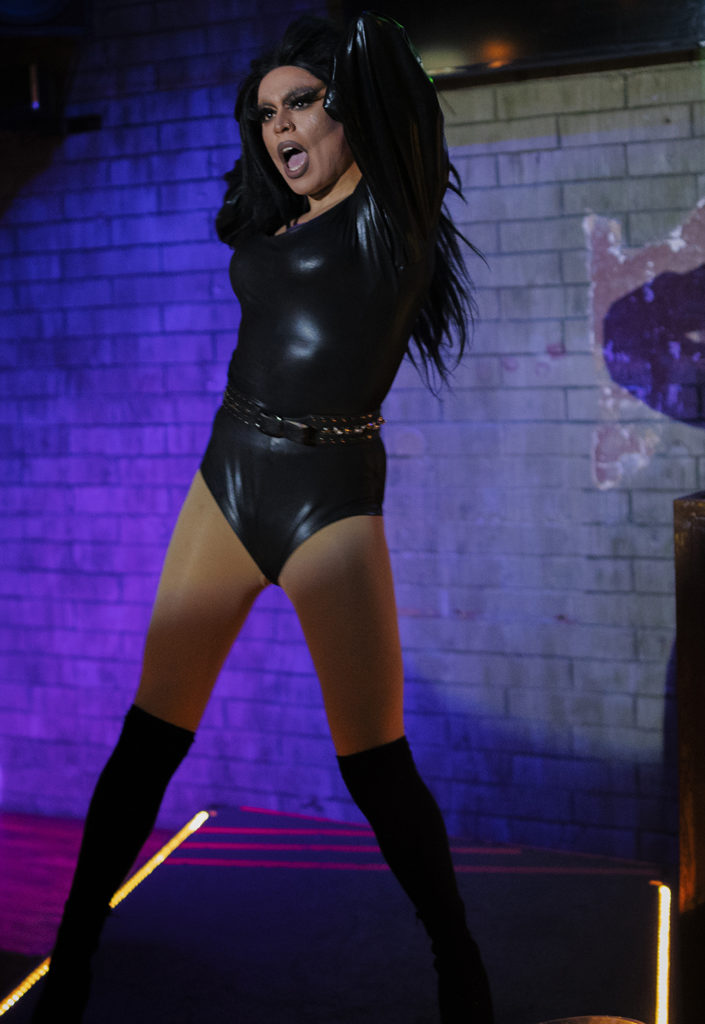 The Doomsday In December event was certainly a holiday treat that brought a certain caliber to the diverse AZ drag scene, and strung together fans who may not be as familiar with Dragula as they are with a certain popular drag TV show on VH1 I do not have to mention (you know, the only other show on network TV).

While talking outside with Frankie Doom and some AZ drag royalty (out of drag), it was either the amount of alcohol I had consumed or maybe it was the genuine feeling of humanity: behind every painted face and created character is a human trying do the best they can with their own savvy and resources. 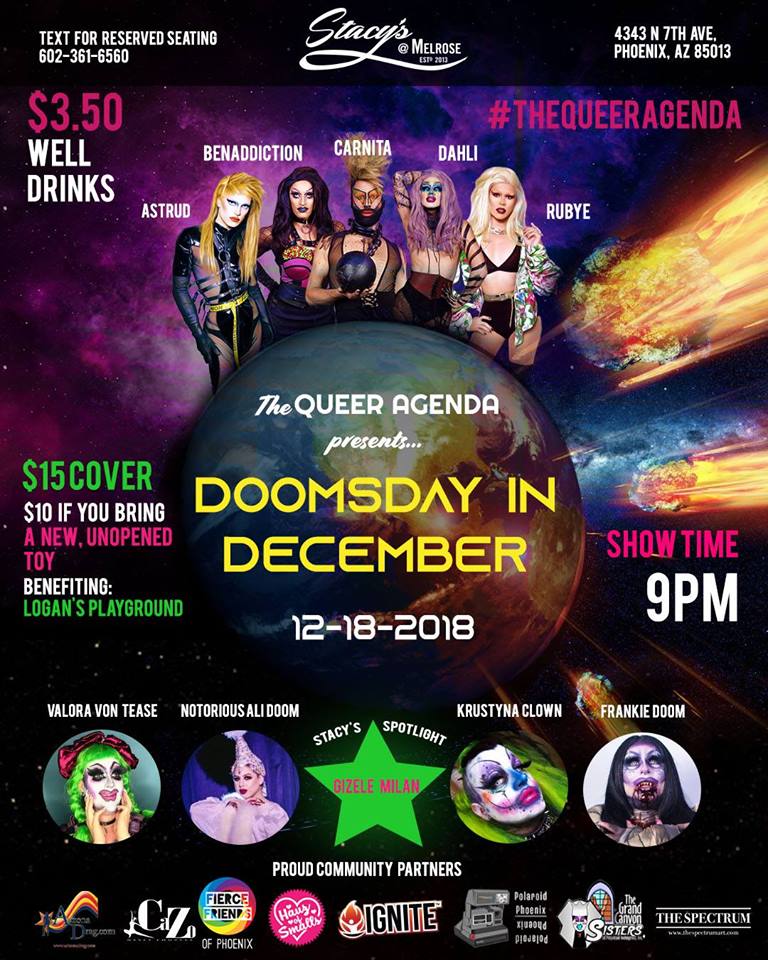