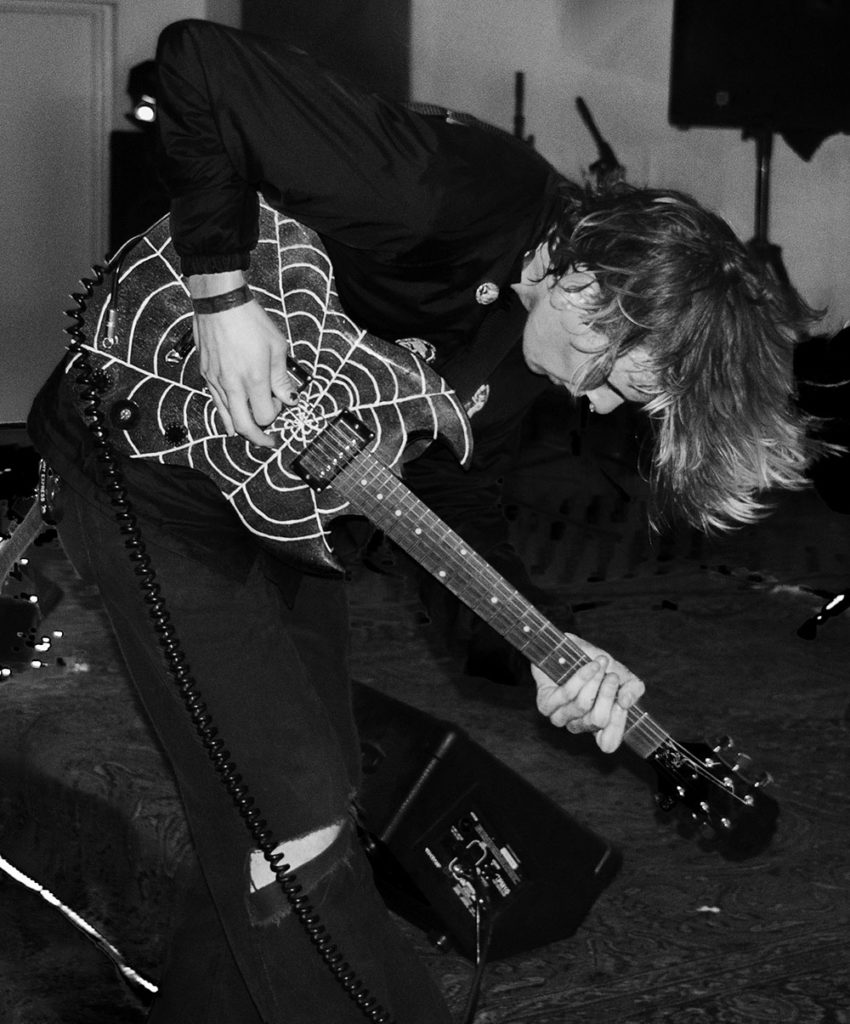 On the evening of a chilly Phoenix Friday on January 11th, I meandered myself to a very early 2019 “large scale” local performance featuring the celebration and album release of Bryan Preston’s vigorous and aurally diverse project, DaDadoh. Along with performances from 2000 Foot Turtle, Acne Superstar, Room 4, LaTosque, and 20 Ft Neon Jesus, the night, which partly rivaled last year’s Crispy Fest, featured a full-scale DJ performance in between sets by DeeJay P-Phunk, tacos, live artists, plus vendors and more at the Pueblo Revival.

After finding out in preliminary event page posts that it would be held in a former church, I actually expected to pull up on a classic, white, run-down steeple when instead I was greeted by a small, nondescript building next to other Central Phoenix landmarks. Inside, tacos and a homey atmosphere greeted guests as they jammed out to classic selections from P-Phunk and were treated to quite a large stage and comfortable performance space. Seriously, whoever put this venue together cares about the comfort of their patrons.

When I emerged from my haze and mingled with the crowd, I witnessed 2000 Foot Turtle jamming out their latest and greatest material in a raw way. It’s always inspiring to see the “young folk” at it again, performing their hearts out to an encouraging audience. The twosome consisting of Clay Knutson on guitar and vocals with Max Ade on drums have the necessary grit to pull off their motto of “Tasty jams cooked up in a garage in the middle of Suburbia,” but also make me wonder where the band will go as the sound develops.

Clay was clearly enthusiastic and confident in his ability, unafraid to immerse himself in the crowd while playing, but I feel like for a band so fresh, there are a few options they can take with their future sound making this “jam grunge” style a decent foundation. Most younger bands I’ve seen begin in AZ undoubtedly either flock to the department of grunge rock or some weird noise punk combination, and while 2000 Foot Turtle has the chops and the moxy, I’m still curious where the project will lead itself beyond that.

As much as I wish I could think of a better nomenclature to describe Acne Superstar, I think “Inbetweener punk” fits the bill with just the right curves. Combining traditional punk composition elements with a soothing acoustic guitar and lyrics about the mundane reality of life, the folks behind Acne Superstar have created sounds that most relate to those of us who have felt they were never quite losers, but also hovering the cusp of being possibly groveled in a group setting.

I’ve heard crowd-members use the term “dork rock,” but that analyzation is a bit unfair: dork can be viewed as a “light” slur which demeans anyone slightly askew from the social status quo and doesn’t take into consideration the contributions of the individuals in front of you. Would it truly be an Acne Superstar gig if Jack didn’t break a string, or Naveen, Nyle, and Jake weren’t endearingly riffing to pass the time?

In usual form, the band kept to their fan-favorites and previously played material in anticipation of their upcoming new EP and release show. Like the rising presence of TOSO, Yipee, and The Linecutters, Acne Superstar consistently bring a (strangely) clean image to the sometimes-messy DIY scene, and a sense of calm throughout the dramatic ego-fueled chaos. Even if the band’s sound isn’t your cup of tea, their good nature will surely win you over as an audience member. 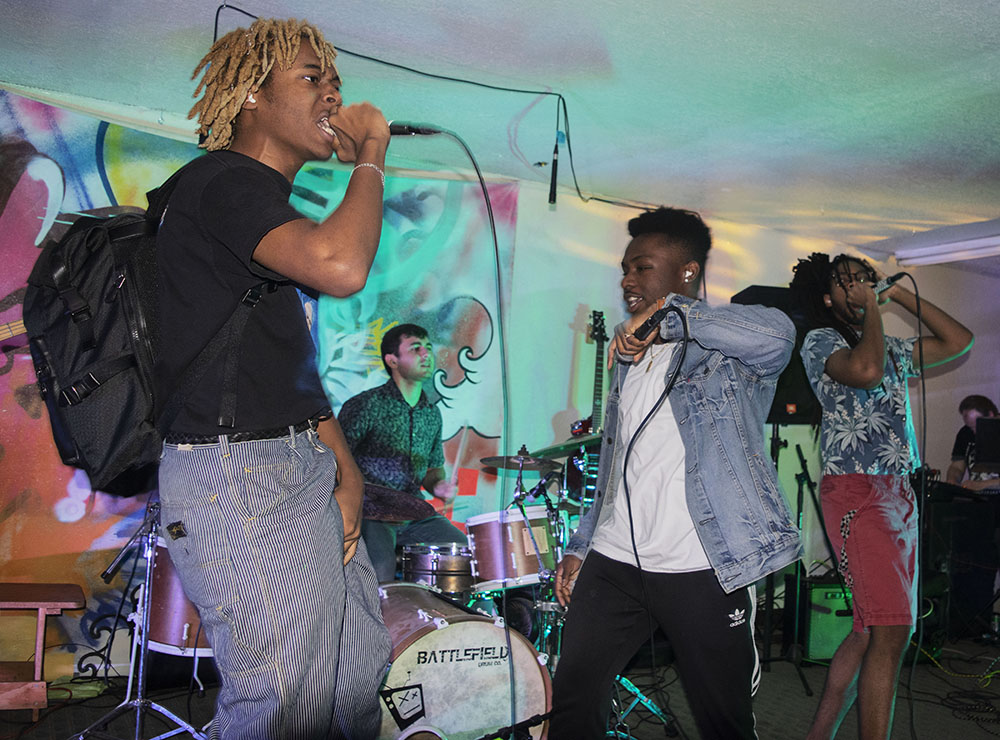 After Acne Superstar, a deceptively low-key group of individuals set up and took the stage before DaDadoh + The POC took their celebratory spot in the lineup. At first, I sort of didn’t realize what I was watching: here in front of me were a group of 5-6 individuals (the Hennessey was making me see double), two on instruments and 2-3 other individuals hyping up the crowd or performing sung / rapped vocals.

Since I awkwardly crammed myself into the 2010 DUB Show back in the day to see B.O.B. at his height, I’ve yearned for the day when I could catch a Hip Hop-based act who performed with live instruments. While I love catching any performer whose music I enjoy, there’s something lackluster when you hear someone’s live, energetic vocals over a tired backing track from the album mix. Room 4 was definitely a departure from this concept, and shifted the crowd’s energy as a good midpoint from “local DIY house show,” to straight-up party. Most of their set consisted of smooth modern rap jams with individuals who were cohesive, but definitely displayed different delivery depending on who was taking lead.

Why haven’t I heard of Room 4? Where the hell did they come from and where are they going? Aside from their tight musical performance, it was refreshing to see performers, especially in the current state of rap, being themselves. It’s not that hard when you go to Goodwill and pick out an outlandish outfit to fit in with what is in style with on-the-rise “soundcloud rappers,” and Room 4 makes enough of a splash by being true to who they are.

Even as a large group, there was never a moment when I felt any member was interchangeable: each member who took the mic reflected their own flow and personality which only confirmed the aforementioned authenticity. It excites me to see more hip hop/rap groups and artists infiltrating the DIY scene; I get tired of seeing some white dude in a fedora whining about cigarettes and girls in lo-fi with an acoustic guitar. 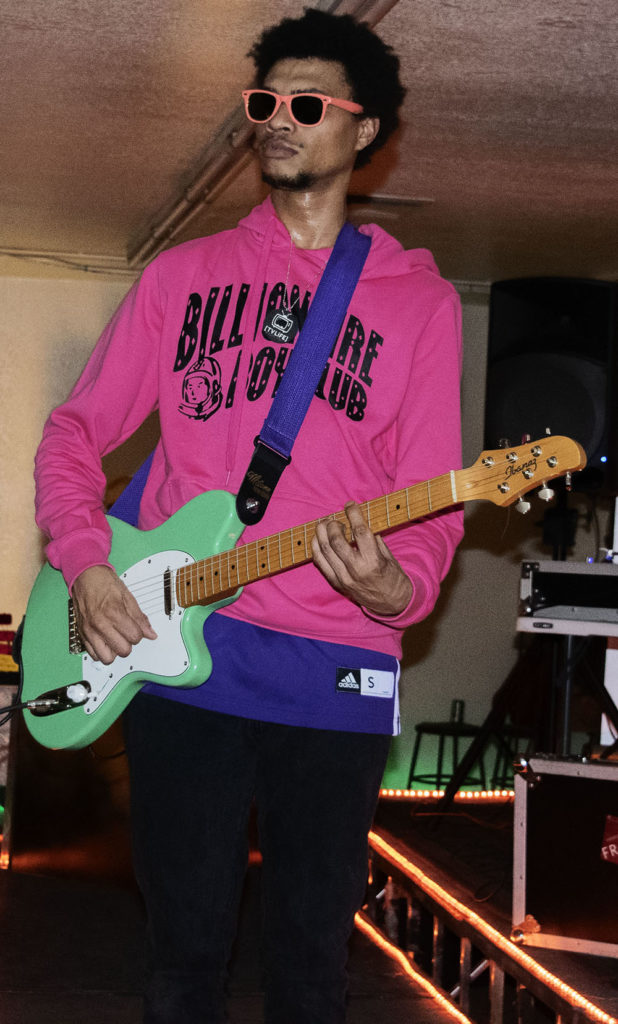 After more brief interludes of funk classics from P-Phunk, the mainstay of the night, DaDadoh + The POC took the stage in honor of their new full-length LP. Seeing them at Crispy Fest was one of the motivations which drove me to this event in the first place: like a similar diatribe made by frontman Bryan Preston, the band emanates this weird combination as if Bowling For Soup grew up listening to Isaac Hayes in the middle of the Nevada desert, while displaying complete irreverence for genre norms. There’s this tacky/classic early 20th century movie poster that lambasts “Garbo talks! Garbo Sings!,” on Greta Garbo’s then-new film Garbo Talks, and I couldn’t think of a better way to describe the sensation of Bryan fronting DaDadoh. He raps, he sings, and he also makes humorous anecdotes between songs. In the voice of Paul F. Tompkins, “what can’t this guy do?”

Maybe I just fell under the spell like everyone else, and my comments reflect a certain brainwashed quality which only those with intense charisma have power over a crowd. When someone tells me to lift my arms up, I do it; well, most of the time. At least I thought about it!

But I digress: among the brief combos of rap and traditional punk vocals, DaDadoh is a solid example of crossing wires or genres not meant to be crossed, but coming together without sounding like Limp Bizkit. While they strangely did not take the two final spots on the lineup, their middle-placement within the show kept the energy flowing into LaTosque. 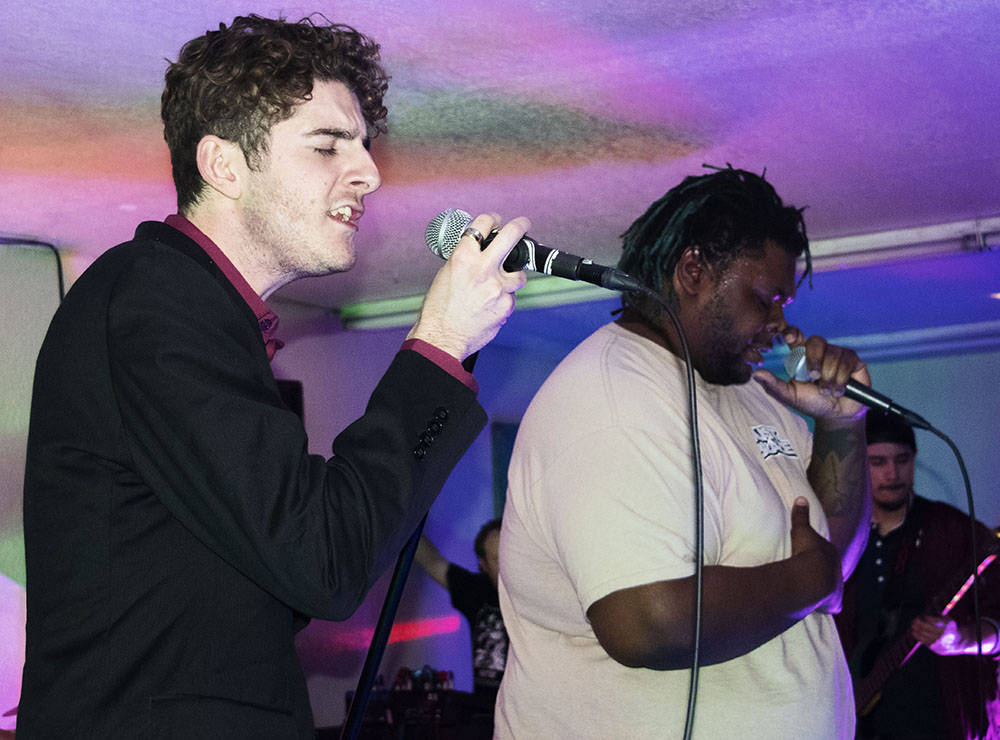 Before LaTosque took the stage, Lou Moon, local comedian, endeared the somewhat unprepared crowd with cheeky riffing and anecdotes. At this point, my feet were mobile beyond my control, and I could only catch a portion of his act, which I will have to catch in a proper comedy setting in the near-future.

Producer, singer-songwriter, and director from East Saint Louis, LaTosque, took the stage with bandmates and initiated the final two segments of the loaded lineup. Mixing rap and R+B stylings, LaTosque brought both the party and emotional angle to his set, and frequently got “pal-sy” with the crowd by projecting a welcoming, chill vibration that contrasted them from the other performers.

If LaTosque and Room 4 somehow ended up on a collab together, it would probably be one of the more bipolar entries in 2019. While Room 4 shifted the vibes to neighborhood block party, Latosque is best reserved for the end of the night, when the party is still in full-force, but the time for reflective nature isn’t off the books. You can party with LaTosque, but he’s going to leave you with new ideas to chew on before you leave. His instrumentals seem inspired by the lady-killing production of early 90s R+B boy/girl groups like SWV, New Edition, and Exposé, but contain a flow more associated with classic rap.

Luckily for LaTosque, the experience of his flow overtakes the downside of early rap, leaving out the inexperience, clunky flow and lyrics of a different time, while retaining the aesthetic and modern flow of the rappers who built the genre up. I don’t know what’s going on in East Saint Louis, but Latosque seemed to be chock-full of bars with a lifetime of inspiration.

After LaTosque delivered the message, it was about 1 A.M., and while I don’t leave shows early, I sadly had to pass on to other Phoenix ventures before my night concluded. While I regret I couldn’t catch the set of 20 Ft. Neon Jesus (thanks for the shot of Hennessey, by the by), it was still a bit jarring to converse with this man dressed like a city-Jesus with a bright, glowing LED crucifix and a strange midwest accent. Before his set even began, I was able to converse with this strange character of a fellow, learning everything from his charisma, but also nothing. I guess my full-blown 20 Ft. Neon Jesus experience and review will have to wait until next time… 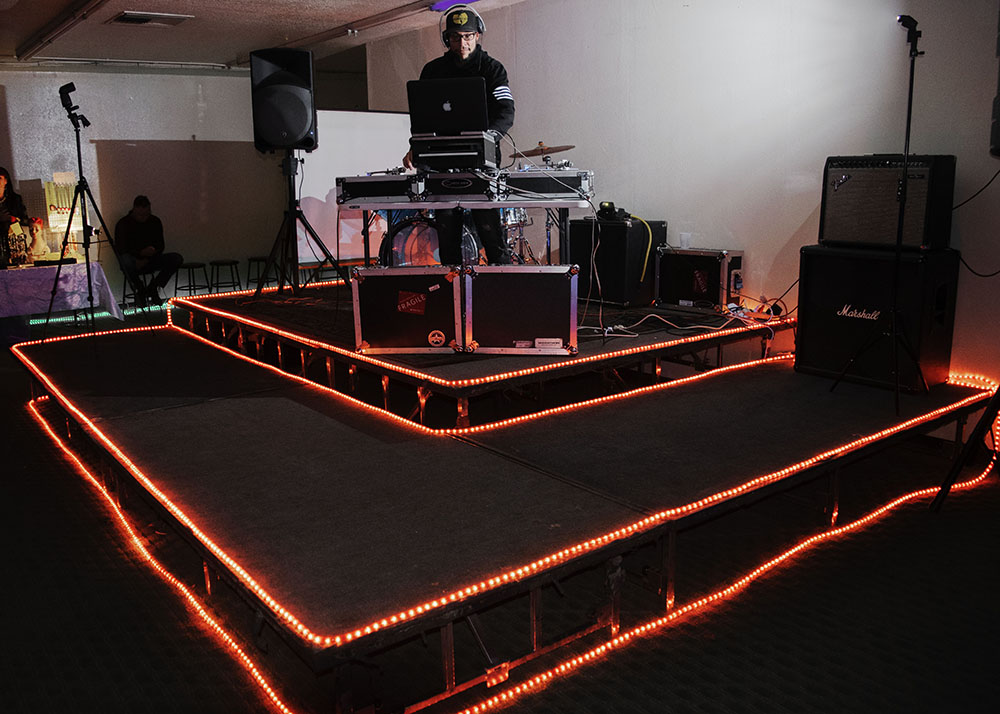 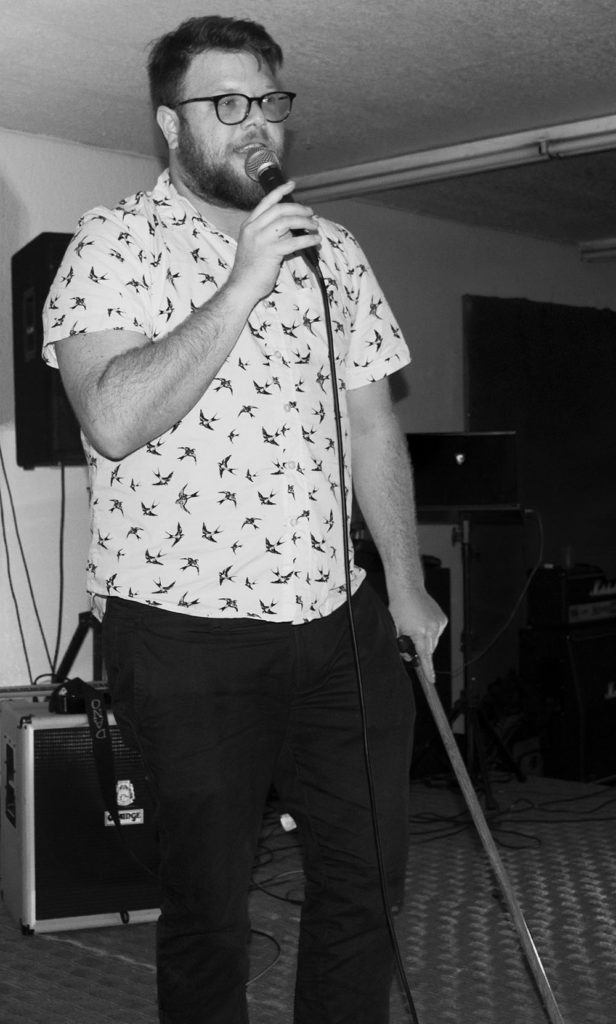 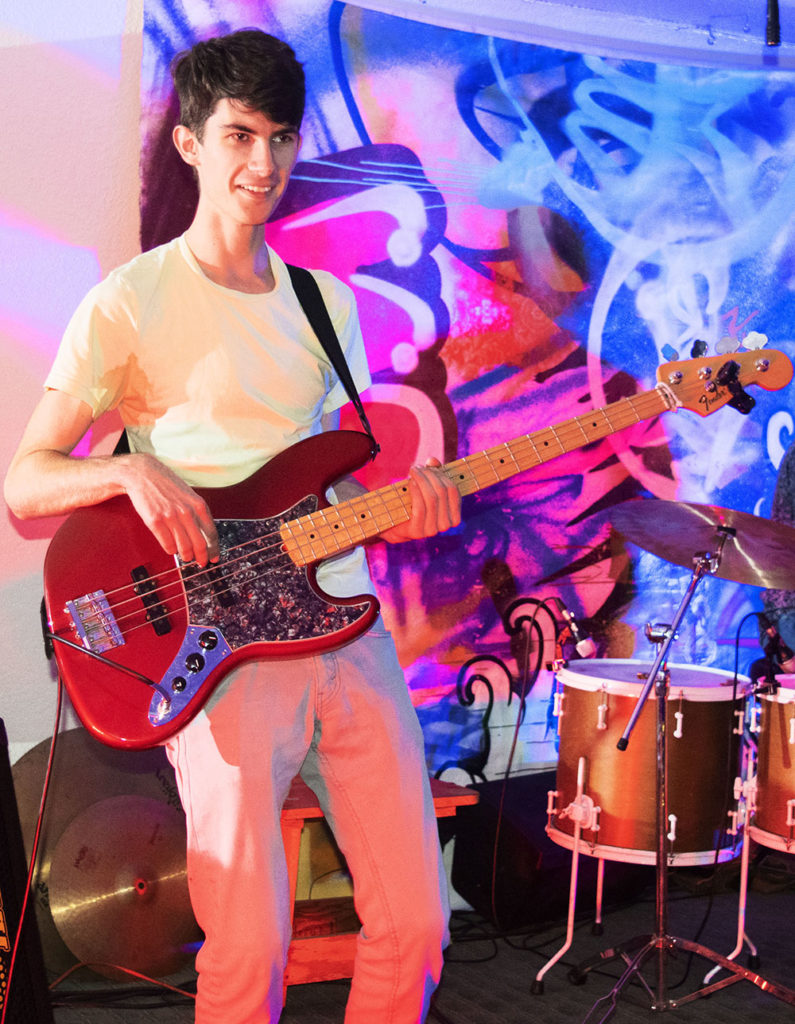 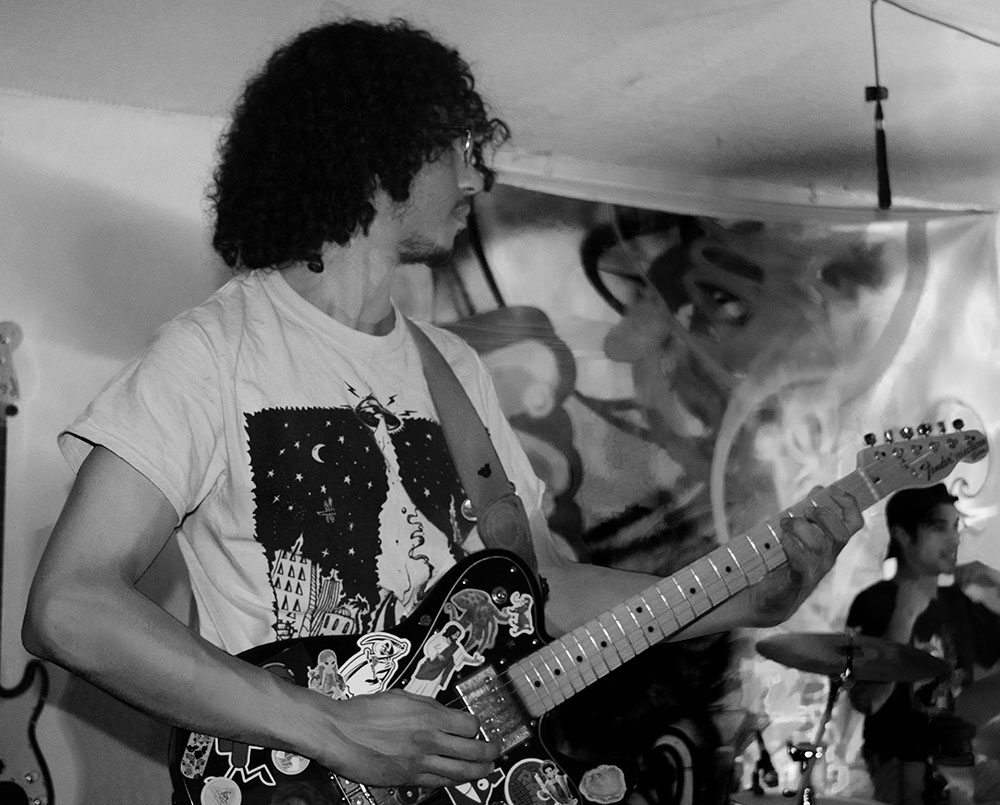 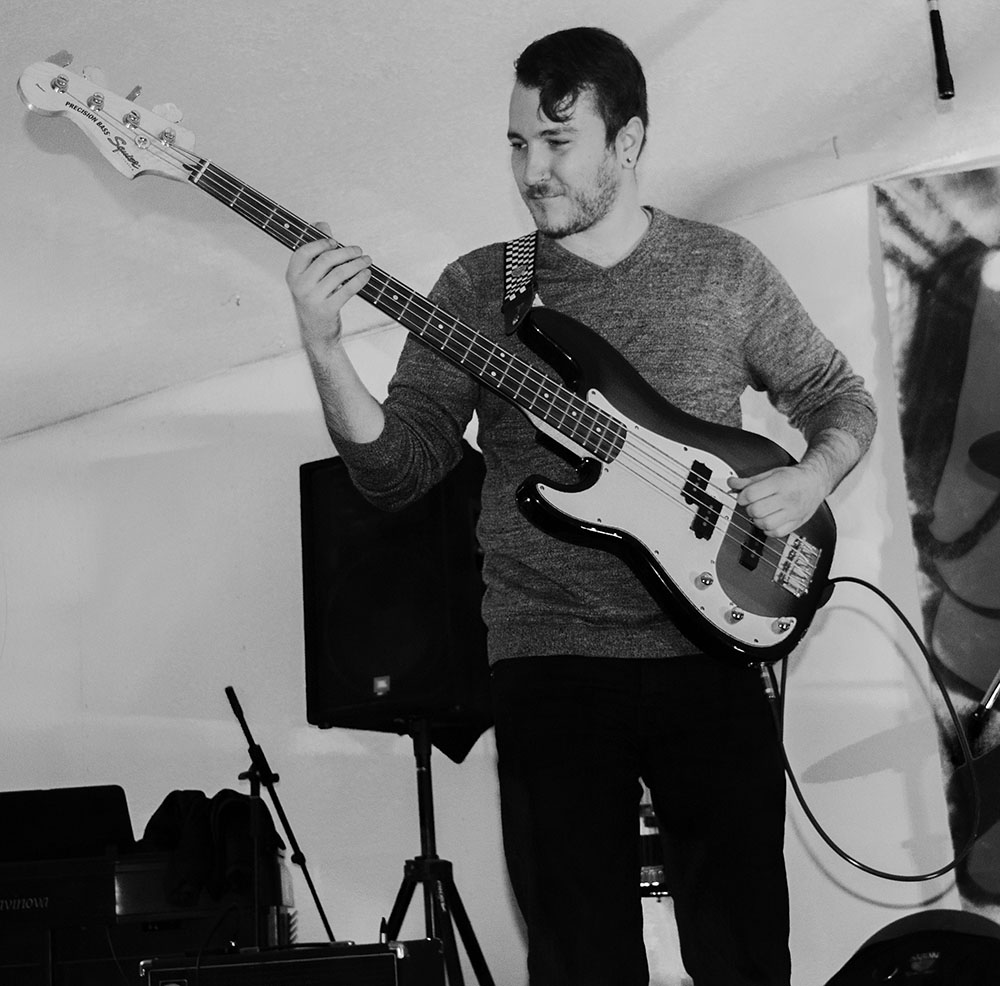 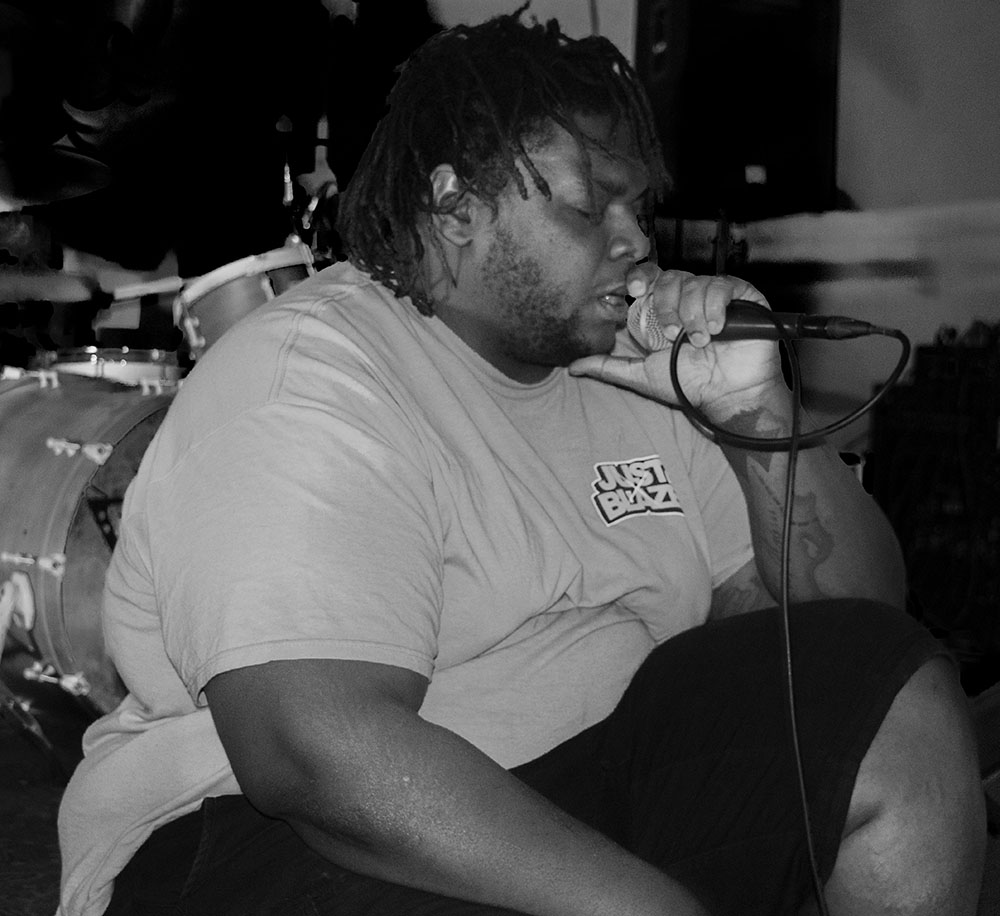