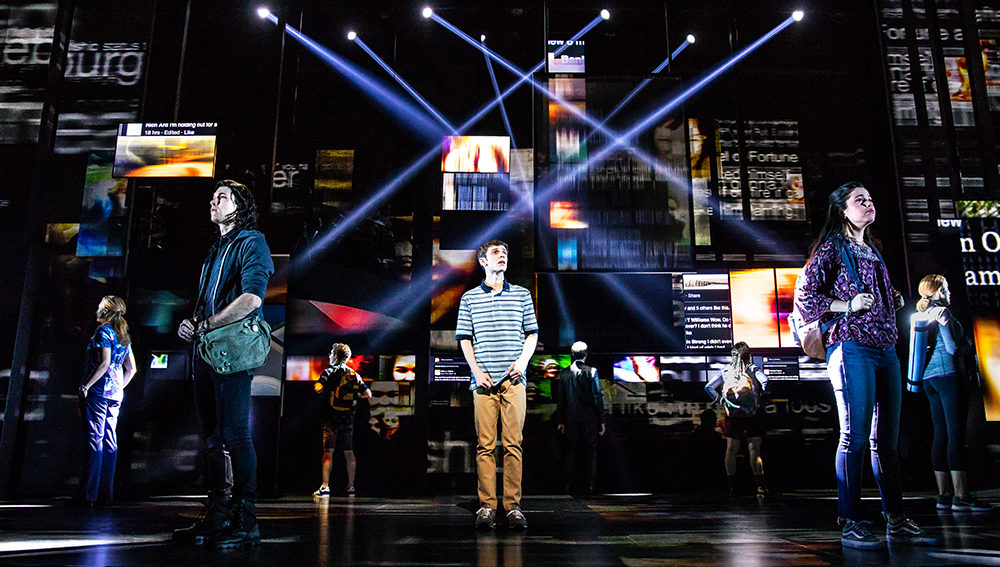 I’ve read the script to Dear Evan Hansen. Listened to the cast album so frequently I know nearly every lyric. I’ve seen several videos and cast performances on YouTube and broadcast television. In other words, I went in ‘knowing’ the show. Feeling like I had a grasp on what to expect. Turns out, I knew nothing.

Dear Evan Hansen opened on Broadway in December 2016. It subsequently went on to win 6 Tony Awards, including Best Book, Best Original Score, and Best Musical. Both critically acclaimed, and buzzed about by the theatre-attending community at large, it’s a show about mental illness and the pervasiveness of social media. The insecurity in all of us. That voice in our heads telling us what we aren’t and what we can’t do. And a reminder that no matter how lonely we feel, we are not alone.

DEH centers around a socially awkward high school senior without any real friends and a limited support system, due to his single mother’s demanding work schedule. A private letter he writes to himself in the computer lab at school is mistaken for the suicide note of one of Evan’s classmates, Connor Murphy. That letter significantly alters the trajectory of Evan’s life, and ultimately rewrites Connor’s, building a legacy for the world to remember Connor by.

Evan is broken, literally and emotionally. We understand him through his frailty. His need to apologize to everyone merely for existing. And our yearning for him to find and accept himself allows us to forgive him for the many poor choices he makes along the way.

Ben Levi Ross could not be more impeccable at articulating Evan’s nuanced disposition. His rapid cadence, uncontrollable tics, and impeccable comedic timing build the foundation upon which Evan’s complexity is built. And the clarity of tone combined with moving vibrato in Ben’s voice conveys everything we need from Evan’s soaring anthems “For Forever “ and “Waving Through a Window” and and his regretful apology in “Words Fail.” 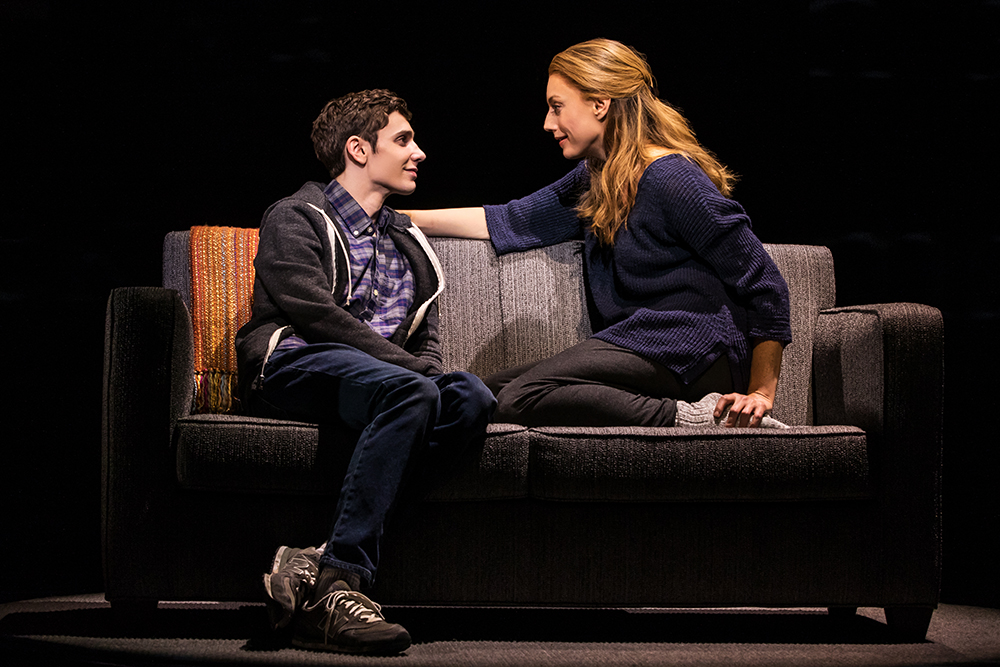 The rest of the cast is equally laudable. Maggie McKenna is effortless as Zoe. Angsty and yearning. Shrewd, but with an open heart. Christine Noll as Cynthia Murphy is both heartbroken and heartbreaking. Cynthia’s mourning sets things in motion and brings the story together, and Noll portrays that vital role with almost tangible compassion and grief.

Aaron Lazar effectively conveys the rigidity of Connor’s father Larry, who evolves from angrily phlegmatic to tender. Jared Goldsmith is hilarious as Jared Kleinman, Evan’s “family friend” who serves as a welcome conduit for some of the show’s most laughable moments. Marrick Smith finds unexpected charisma in Connor Murphy, and Phoebe Koyabe portrays Alana Beck as a Hermione-esque, albeit lonely, overachiever. And Jessica Phillips as Heidi Hansen is cool and collected, yet eventually ripping hearts out, as is absolutely necessary, in “So Big/So Small” as she describes helping Evan cope with his father leaving when he was a little boy.

Although there are very few set pieces, this is one of the most visually stunning shows out there. It conveys the encompassing and disorienting nature of the lives we live in the technical confines of social media. Peter Nigrini’s projections are perhaps the most impactful non-human component in the show. Rolling social media updates, components of a room or an outdoor vista, and pieces of Evan’s letter, shifting portions thereof, adapting to the action happening among the screens. Some subtle commentary, some not so subtle. 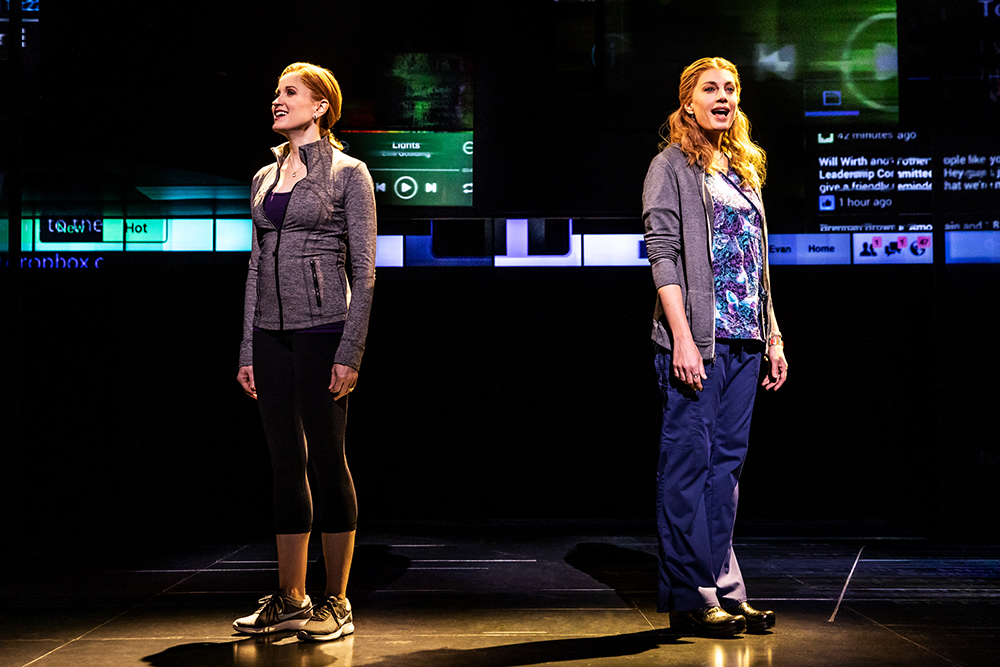 As Heidi walks through “You Will Be Found” at the end of Act I, as the rest of the world is embracing Evan and he is unknowingly slipping farther away from her, the words ‘Best Friend’ pass in front of her. If it was not otherwise realized before that moment, it is a powerful way to remind us of the relationship that existed between mother and son when both she and Evan only had each other.

The sound and lighting are also extremely praiseworthy. ASU Gammage is a very large theatre venue, and at times it is filled entirely with overlapping voices, substantially louder and more invasive than any other action happening on stage, as social media erupts. Much is conveyed in light and darkness. Larry stepping out of the shadows as he finally allows himself to mourn the loss of his son. Abrupt shifts from vivid luminescence to utter black.  The bright yellow-orange warmth that covers the faces of everyone as the show comes to a beautiful sunlit close.

Dear Evan Hansen is a show that everyone needs to experience. It is pervasive and transformative. I went in with unrealistically high expectations, and somehow I still walked out of the theatre blindsided by its mastery and floored by its impact. It is unequivocally one of the greatest shows I have ever experienced. Words do it no justice. Videos of the actual production do it no justice. The only way to truly understand is to sit in a theatre full of other people, experiencing it together. Laughing and cheering and sniffling together.

The national tour of Dear Evan Hansen is at ASU Gammage through 12/2 before heading to California and then Las Vegas. It will also continue its run on Broadway at the Music Box Theatre for the foreseeable future. Tickets are not easy to come by, but there are ways to get them. If you can make it to New York, which I highly recommend this time of year, there are tickets available at the Music Box. You can also try to get tickets for the tour from the Dear Evan Hansen website. For those who are looking for a way to see it without the financial punch of tickets these days, there is also a digital lottery for both the Broadway show and the tour. If you win, tickets are only $42 in NYC and $25 on the tour.