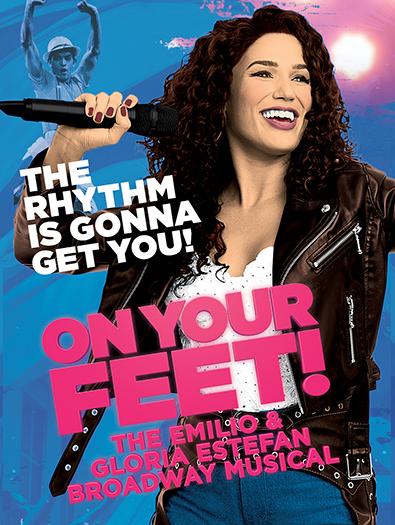 On Your Feet! is a jukebox musical about the life and career of Gloria Estefan and her husband, music partner and greatest advocate of 40+ years, Emilio Estefan. It is a celebration  of hard-earned success. An exploration of the complexities and tribulations of families. A story about how humans rise above the tragic events life presents to each of us. Combined with a thorough injection of the joyous energy only experienced at a conga dance party.

On Your Feet! made its Broadway debut in November 2015 and played until August 2017, scoring a Tony nomination for Sergio Trujillo’s high energy choreography. In addition to its ongoing national tour that brought the show to ASU Gammage, it is currently playing in the Netherlands and is scheduled for a sit down production in the West End next year.

The show opens at a concert, with a full band on stage, immediately establishing an amped tenor. Set to the infectious Latin pop made mainstream by Gloria in the 1980s, it seamlessly shifts from concert venue to the streets of Miami and back again. The backdrop screen is used to convey everything from high rises to a dark snowy sky, in tandem with the use of both understated spotlight lighting and the colorful flashing and strobing customary at an arena concert. The costumes are vibrant and flowing, complimenting the fast-paced rhythmic dancing. And the epically rapid and precise footwork of young Jeanpaul Medina Solano is particularly impressive.

The tour includes several members of the Broadway cast, namely Christine Prades as Gloria, Ektor Rivera as Emilio, and Alma Cuervo as Consuelo Garcia. Each is spectacular in their own right, as is the rest of the cast. The ensemble is absolutely fabulous, guaranteed to bring down the house every night.

While the show is lots of fun but not particularly profound in its storytelling, it delivers a few quite powerful moments. The lovely “If I Never Got to Tell You”, an original song written for the show by Gloria and her daughter, is a highlight that adds tremendous depth. And the moment Emilio confronts a record exec with a reminder of his immigration story, crescendoing with “You should look very closely at my face, because whether you know it or not, this is what an American looks like”.

Perhaps because it was election night, in the midst of a partisan divide that has forced immigrants into the forefront, but the sentiment hit tremendously hard. And the audience erupted in revelation as the words were spoken. Another reminder that the catharsis of a shared theatrical experience is not always purely reliant upon the performances of those on stage. Sometimes, the moments we feel most profoundly are due to the realization that we are not alone. That the things haunting our fears and concerns are founded, but we are united in our optimism.

If you are looking for an enjoyable night, full of bright lights and catchy tunes, On Your Feet! is a very solid recommendation. Especially for anyone who holds a nostalgic place in their heart for Estefan’s music. Sweet and touching, full of fun, and guaranteed to get you on your feet.

On Your Feet! opened at ASU Gammage on Tuesday, November 6 and plays through November 11. There are still tickets available, and they can be purchased from the Gammage website. The tour heads to Tucson next, starting November 13. Tickets for the leg at Centennial Hall are also available online.