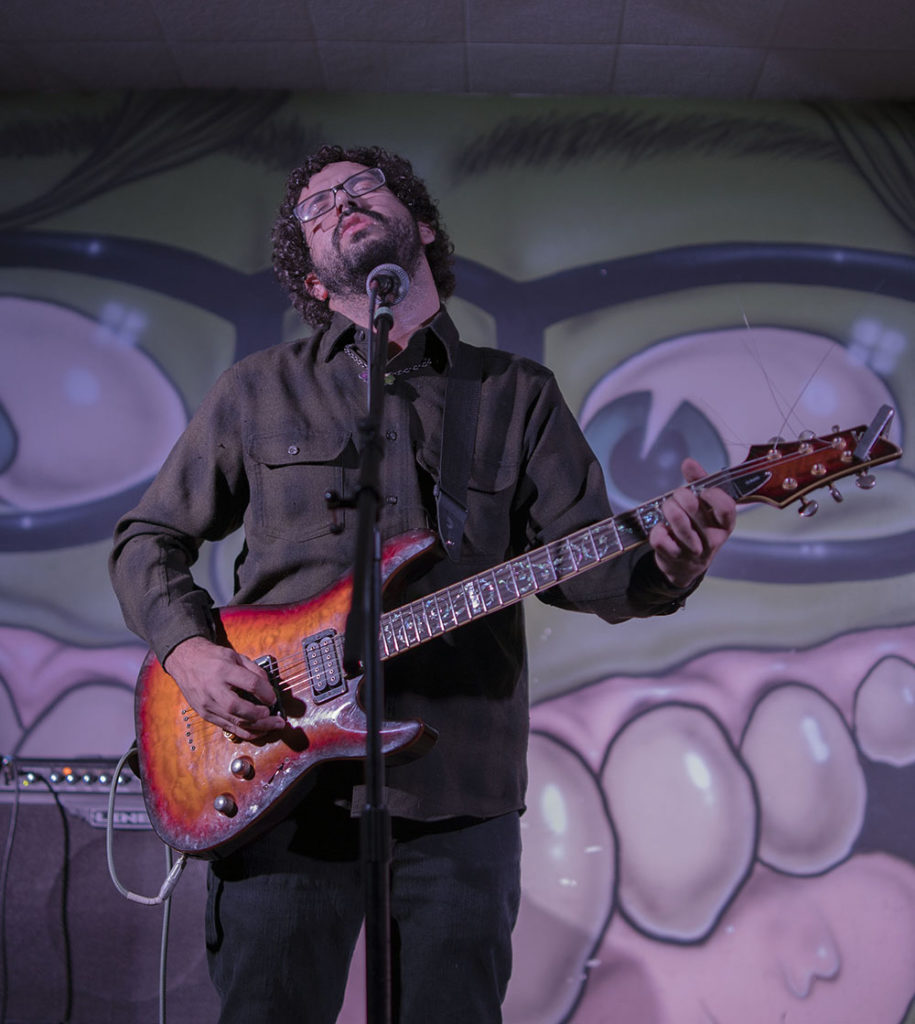 On November 16th, I found it necessary — no, essential — to make my attendance to the fabled CRISPYFEST a reality, although it had been quite the gap since my last event review.

There have been many of what I would call “party punk” bands which have traversed the Trunk Space halls in years past, but very little could compare to what Exxxtra Crispy offered in their years of existence. Featured as a multiple-billed local “fest” with The Aquatic Hitchhiker, Sad Dance Party, Hesperus, Dadadoh, TOSO, and Fairy Bones, the closing band of the night ensured the organization of this evening would be pulled-off seamlessly. Not only were there multiple tables featuring Navajo tacos, fry bread, and folks selling local trinkets, but the thirty minute sets each band occupied from 7 PM until 11 created a frenzied crowd which represented what local events should look like.

In the beginning swings of the night, The Aquatic Hitchhiker brought their brand of what they described as “burned out folk music by a bitter former hippy for people looking for the next great cult to join” with only a simple setup of one individual and one guitar belting out steaming, emotional romps. As much as I was unfamiliar with their catalog, I couldn’t help but enjoy the contradictory vibes this strong effort in folk punk brought to the beginning of the fest: here comes a dude who knows he is sharing the stage with a broad mix of artists’ subgenres and instrumental interpretation, making the conscious choice to bare his soul with a simple vocal-guitar setup.

Since it was my first time hearing of any “aquatic hitchhiker,” including one who sported caustic folk-punk on their sleeve, the heart of the performance shined just as bright as the in-your-face lyrics.

Let’s Start a Cult
Doc Sportello
Culture Drug
Every Man An Island
What The Fuck Kind of Neighborhood is This?
On Any Given Night 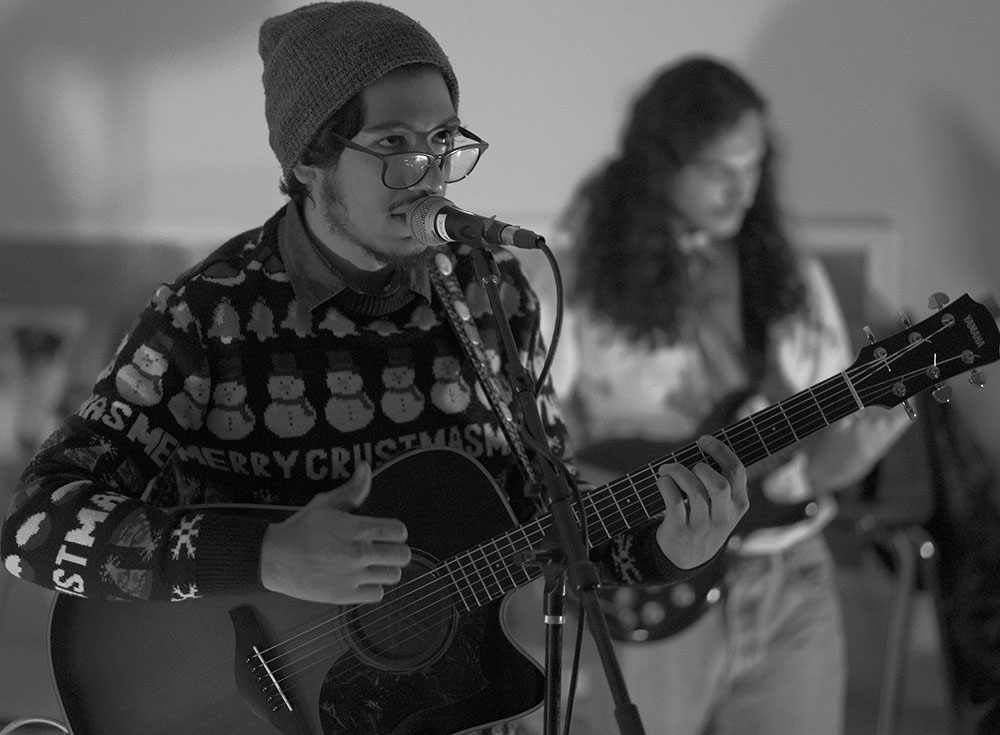 In the basement featuring the second “stage” of CRISPYFEST emerged a set of Phoenix celebrities in their own right, the “Indie Punk” bandits known as Sad Dance Party. What can I say that I haven’t written before? Like my reviews of The Linecutters, SDP always carries a professional sense of consistency with every performance. Even the slightly imbalanced sound of a church basement did not stop Will from shredding out, and frontman Peter from donning a very Crispy Christmas sweater during the set.

With the release of their first full-length album, the band began transitioning from the undeniably familiar Arizona “DIY” sound to a cleaner, fresher quality synonymous with big-label bands. Although Peter himself might take the humble road with SDP’s influence on the local scene, the mischievous vagabonds behind the band have what many do not — an actual objective for their sound. Like the often-featured TOSO, it would surprise me more if somebody said they haven’t caught a Sad Dance Party live set. 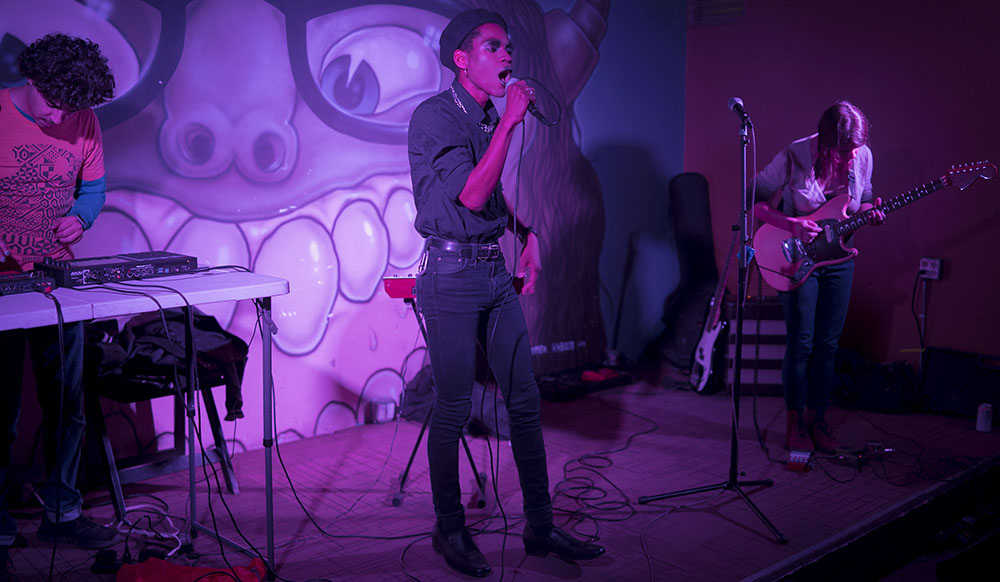 Thirty minutes came and went before Hesperus was slated to arrive on the “main stage.” Featuring the vocal talents of trombone alumni Daniel Suber from Exxxtra Crispy, local producer Manolo Lago (better known as Gimpheart who has been spreading his production mojo across the valley in different acts), along with Jessica “JD” from Sun Conscious on guitar, donate their various backgrounds to make what I would call “queer art rap.”

Under the incredibly human lyrics featured mellow, ambient electronic instrumentals, exuded jazz and hip-hop instrumental influences under the equal contributions between all three members. With the large amount of individual talent stemming from each member, Hesperus could have suffered the fate of “too many cooks in the kitchen,” but their live performance proved they could overcome the more complicated riffs of their studio work to make their live performance truly special.

Compared to their studio work, Gimpheart plays a large part in guiding their compositions and firing off samples left-and-right, leaving no awkward silences or “off” moments for Daniel, AKA MC/DC, while JD’s guitar provides the icing on top. Although some opportunities for vocal harmonies could not realistically be featured, MC/DC and his smooth flow added enough “bump” to the mix, never allowing listeners to be lost. 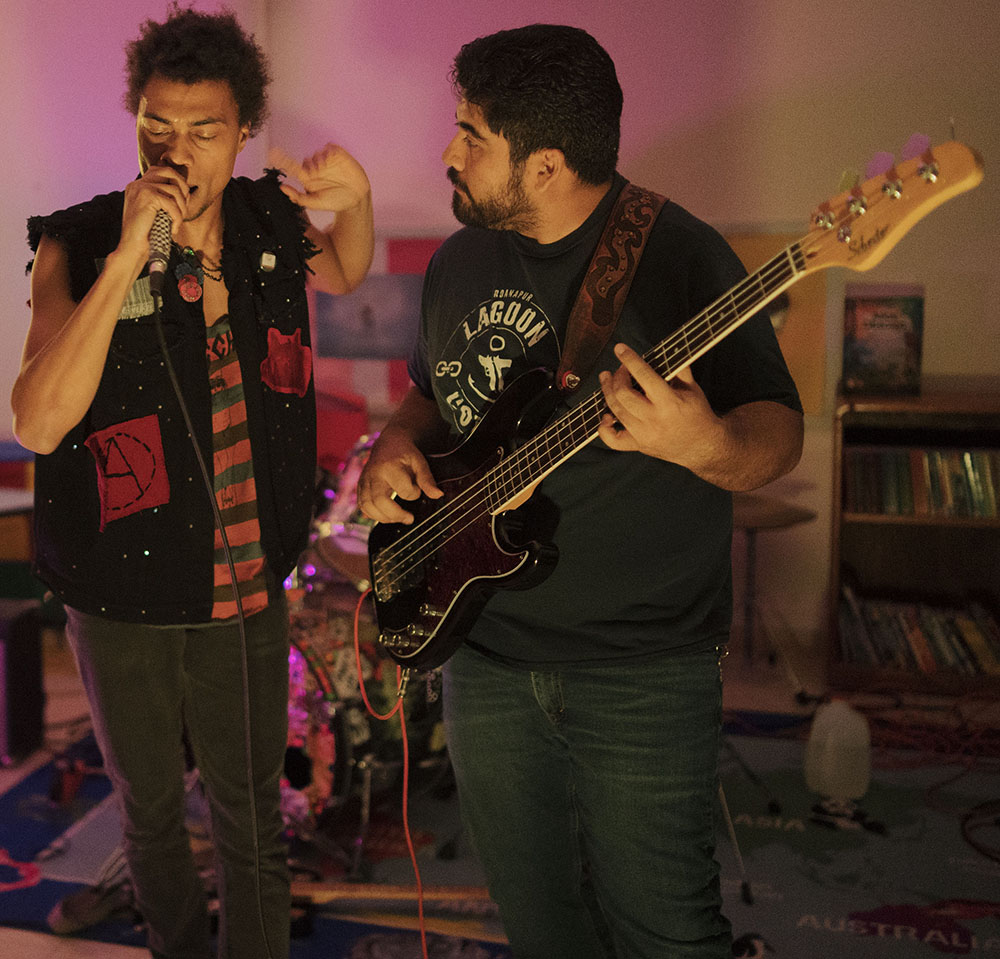 Shortly after the end of Hesperus, Dadadoh quickly switched vibes to overdrive and made way for the more aggressive group acts of the night. Without knowing a lick of their music aside from You Can’t Rap Forever, frontperson Bryan Preston brought doses of humor, punk, protest, and manic energy to noisy punk-rap tracks (some of which were mixed by the famed folk-punk staple Andy Warpigs in the studio). Let’s lay down some facts — we can all recall plenty of local shows where on-lookers simply stared at the band performing in front of them, playing their hearts out with little audience interaction — thankfully for Bryan, I don’t think he gave any time for the audience not to be involved. With an infectious sense of humor and demanding tenor skirting around the room in punk fashion, it was impossible to miss the crowd bobbing up-and-down while eating up every word he threw at them. Good music will bring the crowd over, but top-notch charisma convinces them to stay; I wish Red Hot Chili Peppers let Bryan Preston produce their albums instead of dad-rock. 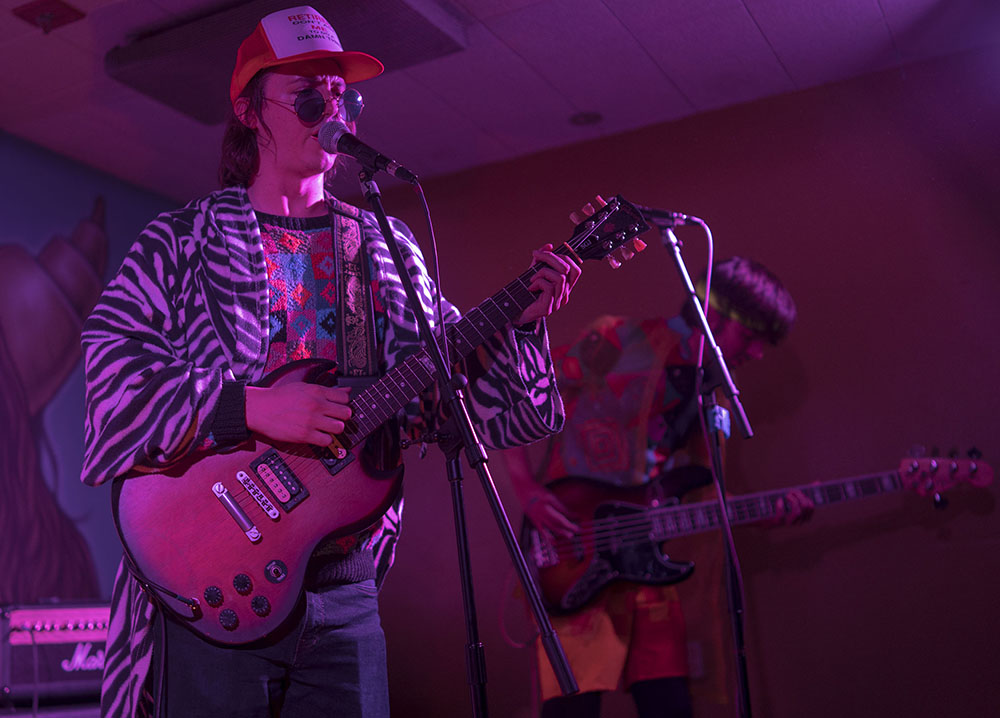 Like Sad Dance Party, TOSO is another act who many can’t get enough of, but we have seen plenty of times. As a local mainstay, TOSO blended their own lore of styled artrock and nonsensical Rocko’s Modern Life-esque storylines to build solid statements which draw crowds be it at a pool party or in a dark, dank bar. With every performance arrives a new plot, and with every new release begins a new chapter of this prideful dorky foursome, mixing psychedelic sensibilities with modern rock melodies.

Either due to the length of the set or the band not willing to upstage any other acts, the theatrics (aside from costumes) were on the “lite” side and featured only a page of the TOSO lore mentioned above. Regardless, the band used their 30 minutes wisely and showcased their most recent contributions to their catalog including a Proclaimers cover. For first-time listeners, this may have not been the most fleshed out of TOSO gigs, but it was a welcome set made in honor of the Exxxtra Crispy demise. 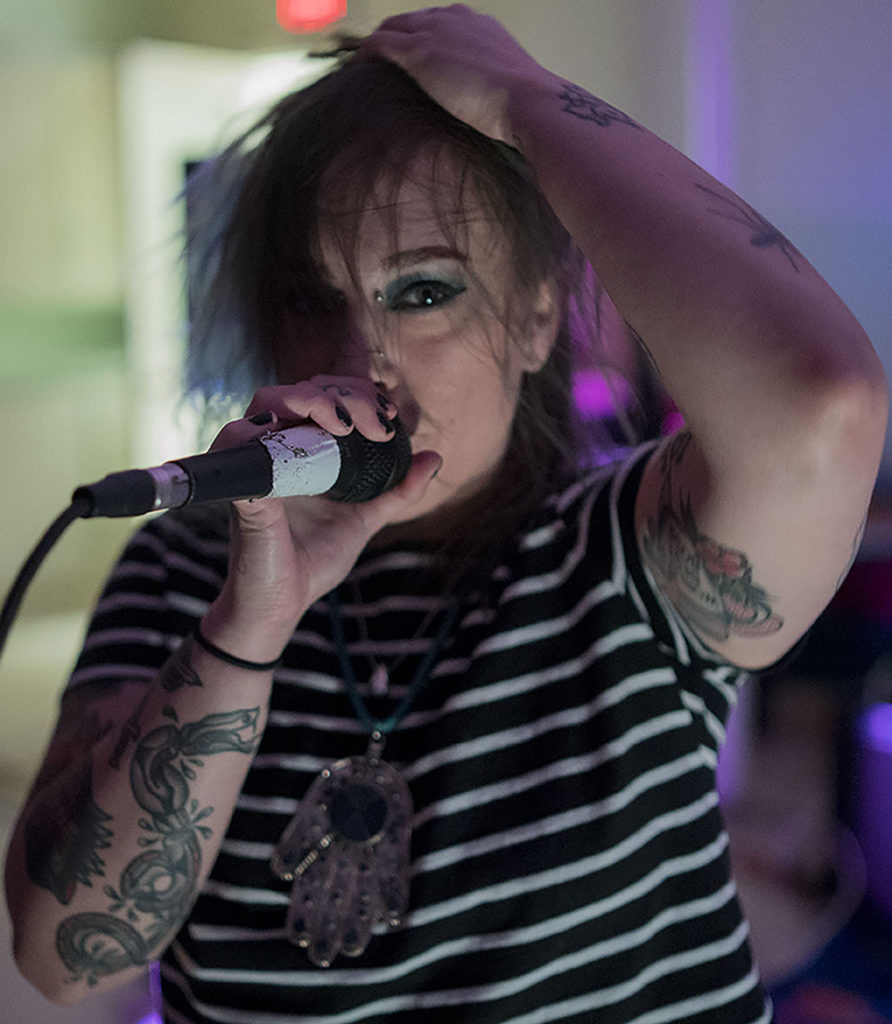 Fairy Bones was slated to be the penultimate act and didn’t disappoint in being the “surprise” entry billing amongst the splinter bands stemmed from Exxxtra Crispy and the local mainstays I know and love. While I spoke to them about their local origins, it was unbeknownst to me how they flew under my radar in my sector of the local music scene. Presented were a group of hardened 20-somethings with the energy of Garbage in their heyday meets Arizona punk. While less caustic and much more easy-going than some of the former acts, the live catalog of Fairy Bones proved to be the happy medium between caustic and “feel-good.”

Their most recent record titled 0% Fun seems to be a misnomer, because lead vocalist Chelsey Louise didn’t stop her momentum for one second before psyching the crowd up with a powerful belted punk riff and equally enjoying the small stage-space with her bandmates. While some of the younger crowd had to be encouraged to come closer (with the wide berth of Chelsey’s movements) Fairy Bones contained a “come as you are” attitude and was the ideal companion for the future final set of Exxxtra Crispy.

Bandmates Robert, Ben, and Matthew rounded out a tight sound that let us know this was just another day in the life of Fairy Bones. In this specific timeline where the rigidity of old punk is being overshadowed by the queer, hip, all-inclusive protest punk aesthetic, the members of Fairy Bones seem to fall somewhere on the border: they are clearly old enough to remember the racist assholes playing three chords, but young enough to keep the gritty, in-your-face energy with new imagery less focused on exclusion.

The last slot of the night finally arrived shortly after the Pages Per Content tamales crew made their grand entrance. As the main stage area became unrecognizably packed and energetic for a local show, the cult of Exxxtra Crispy took full form in honor of one last fun-and-filthy set. When I first witnessed Exxxtra Crispy I was enthralled by how wonderfully unorganized and haphazard their initial appearance and set seemed, but how tight, funky, and unapologetic their vibes were.

After witnessing a few bands tonight stemmed from the remnants of this final encounter, the last short set of this punk party band seemed more like a superhero reunion of talented musicians with their bombastic frontman. Scattered among the crowd were local Phoenix celebrities, familiar faces, and family members destined to see them off, and the set they played were reflective of where they came from and how they arrived at this point.

The crowd was also treated to the first and last live performance of “Her Hair Looks Like Unicorn Blood,” a fitting end to the saga of new material. Although I haven’t caught more than one Exxxtra Crispy show outside of this set, I heard murmurs around the crowd after “Scumbag” ended, which confirmed that they ended how they began. I don’t think Exxxtra Crispy were ever the Michael Jackson of The Jackson Family, as they were frequently underrated both on billing and musical quality in the local scene. While I do believe they had much more potential to go farther with their addictive lyrics and energetic live shows, the party does have to end someday and at least they weren’t LaToya.

No one wants to be LaToya.

Brain Salad Surgery
What the Fuck is Wrong with Me?
So Many Problems
Chocolate Jesus
Corporate Rock Bangers Still Suck
Her Hair Looks Like Unicorn Blood
Andromeda Will Have Her Revenge On Tempe
Always Angry
The Best Part of Forgetting Everything is Getting to Experience Everything For the First Time Again
Exxxhausted
Ride All Night
Scumbag 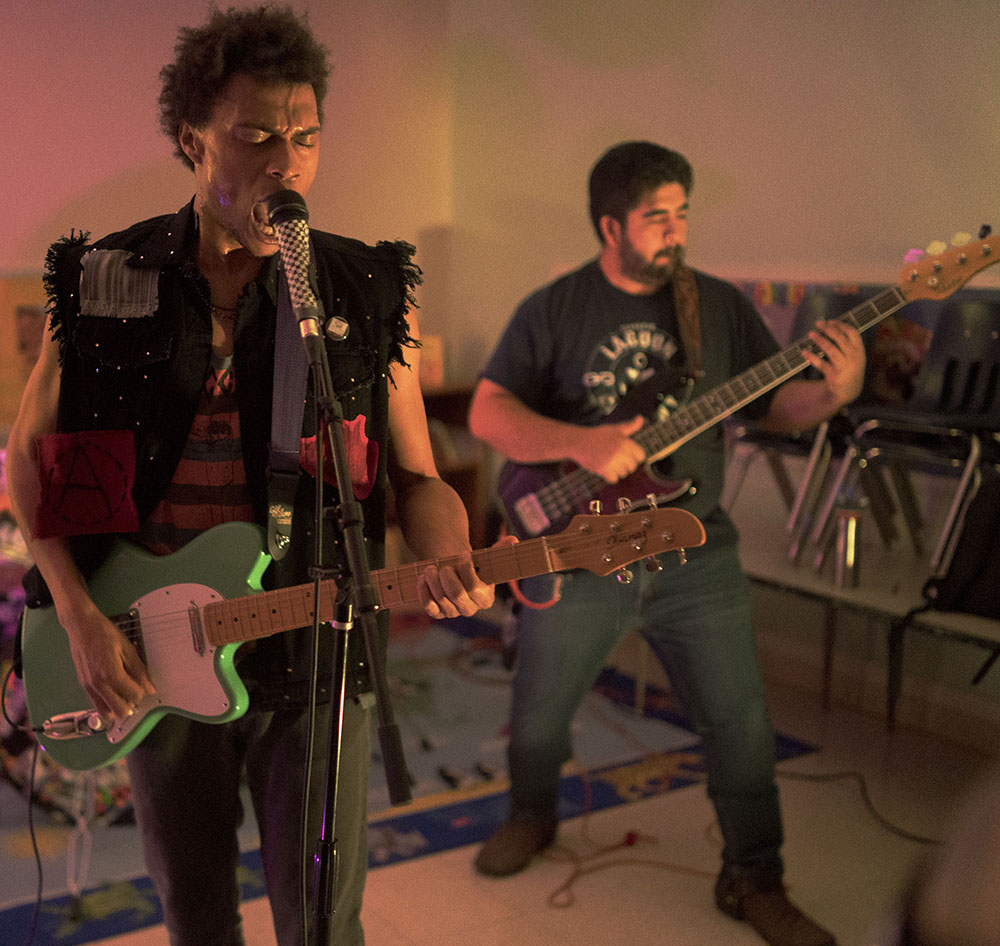 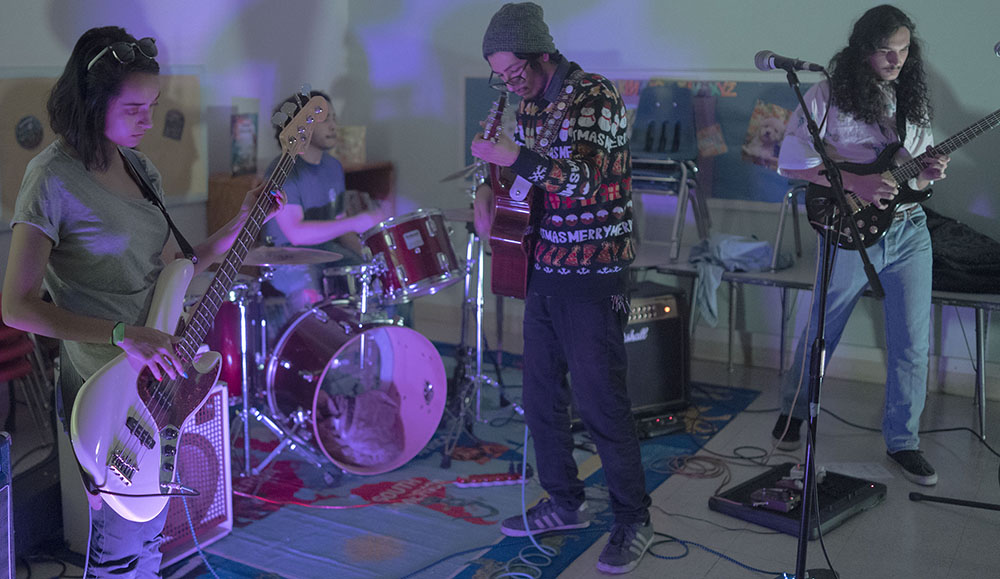 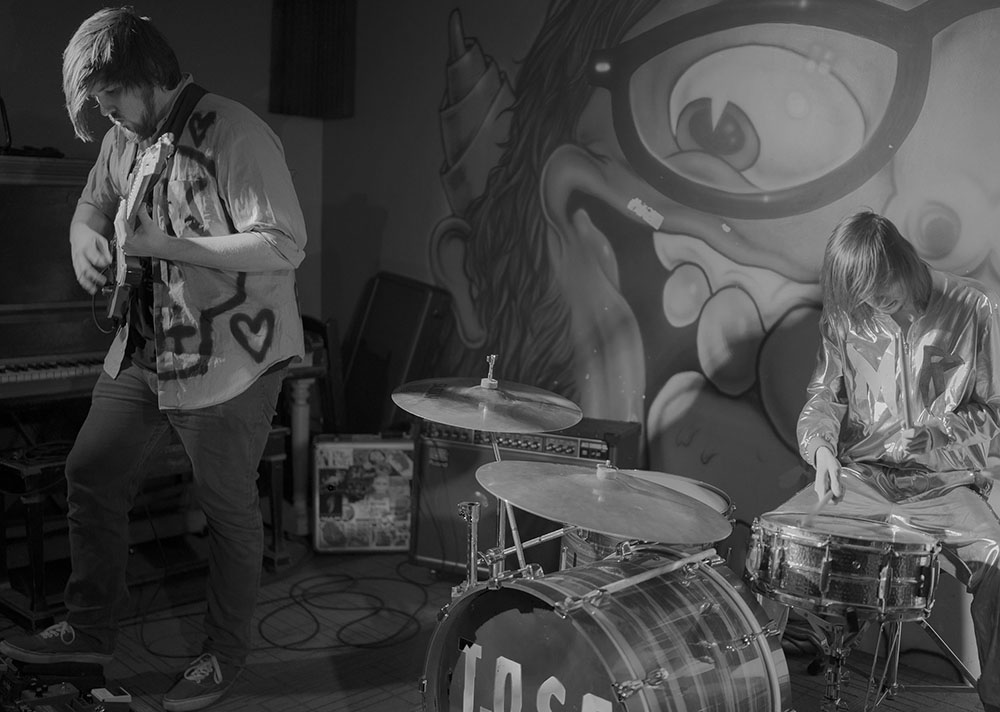 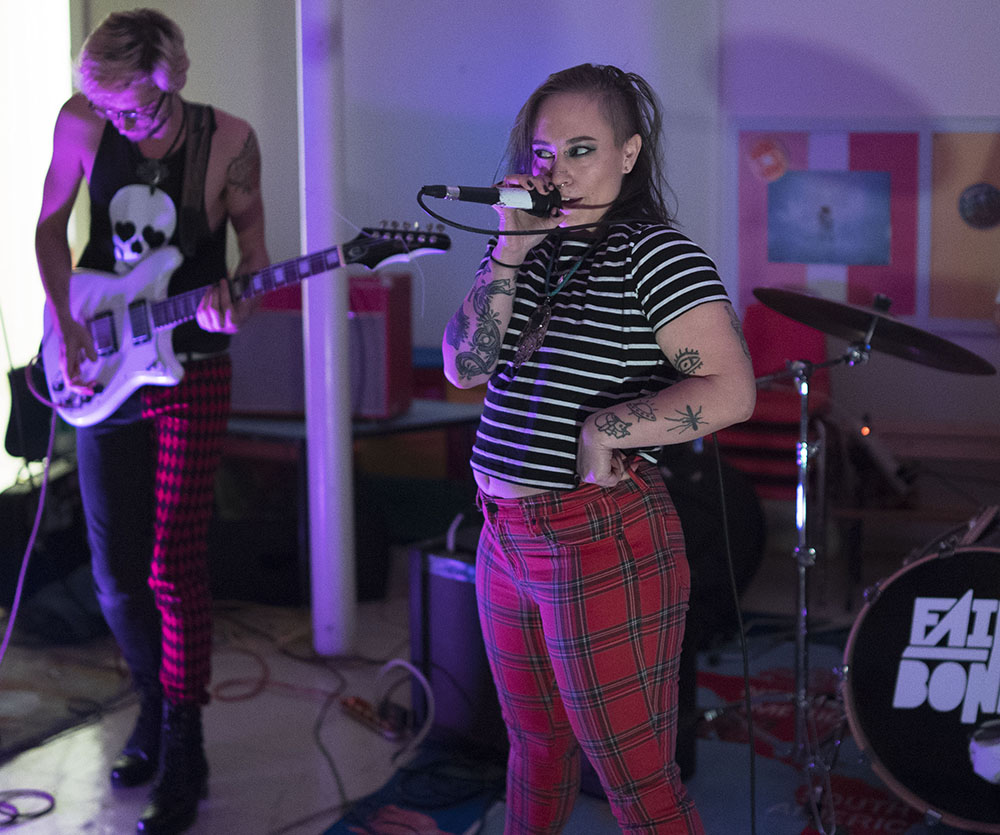 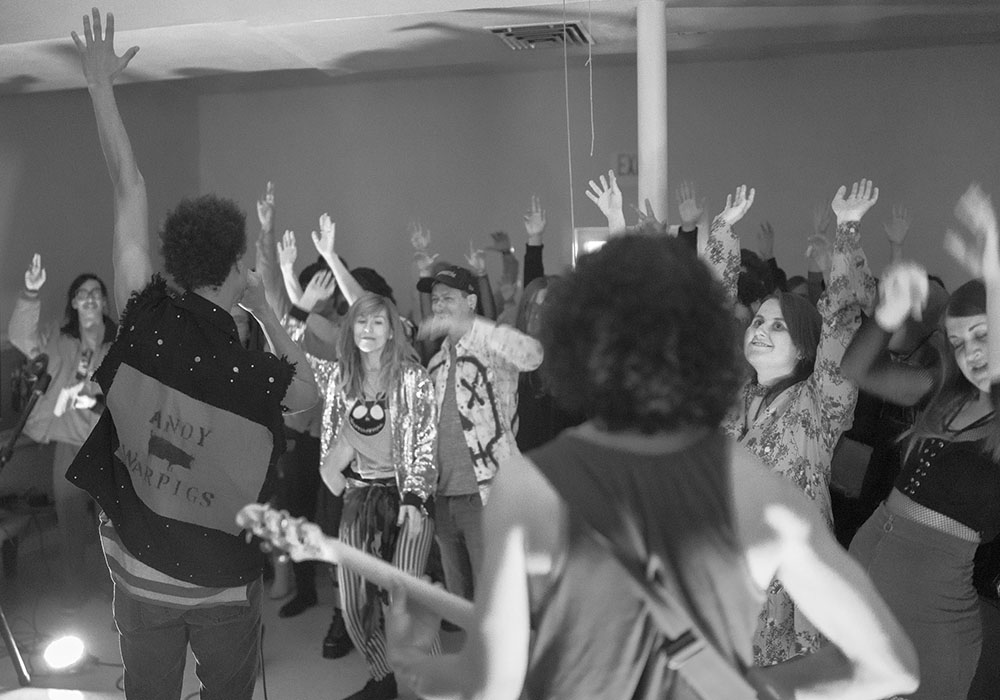