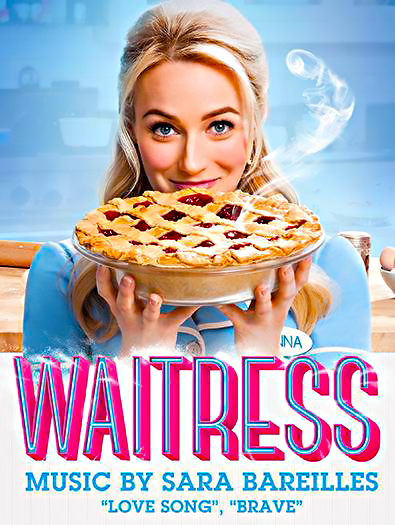 Waitress is one of those shows.

Not nearly in the realm of Hamilton or Dear Evan Hansen, but still one of those shows that injects itself into pop culture and brings people in. Its music transcends the forum, with songs like “She Used To Be Mine” reaching young and old alike. In many cases people have fallen in love with the song, traced its origins, and it brought them to the theatre. A place they presumably never would have found themselves otherwise. A show that has the potential to create a theatre-lover for life, passing that appreciation on to their loved ones. Establishing a new generation of theatre-goers, keeping the medium alive in a future likely to be dominated by CGI, uncomfortably realistic video games, and even more realistic virtual reality.

Based on the 2007 indie film by the same name, Waitress made its Broadway debut in 2016. Directed by Diane Paulus, choreographed by Lorin Latarro, with a book by Jessie Nelson and music and lyrics by pop star Sara Bareilles, the exceptionally rare all-female creative team established a powerhouse hit, receiving acclaim and several award nominations in the year dominated by Hamilton.

Ultimately, it is a show about personal evolution and everyone’s deep-seeded wish for genuine happiness. Not just “happy enough.” A young girl in a small town finds out she is pregnant after an intoxicated evening with her emotionally abusive husband. They married young. Jenna knows no other life. But her tremendous baking skills, endowed upon her by her mother as a distraction from her own abusive relationship with Jenna’s father, provide an escape route. A way out of the unhappy life that previously felt fundamentally preordained.

The sets are effectively grandiose, yet understated to represent the rural southern community Joe’s Diner resides in. Full of butter, sugar, flour and pies. So many pies! Pies Jenna creates and bakes every morning, an expression of her dreams, desires, and frustrations. Jenna’s pies bring joy to everyone who comes into contact with them, and they form the foundational trajectory for her life story.

As someone quite familiar with the music and story, I went in with certain expectations. And in most cases, although seeing the production for the first time, I was correct in my assumptions. Leanne Klingaman is adorable as Dawn, and her “When He Sees Me” in the middle of Act One establishes her as the underdog that everyone is rooting for. Jeremy Morse brought down the house, rightfully so, as Ogie in “Never Ever Getting Rid Of Me,” almost forcing the audience to its feet with excitement. And the iconic ballad of self-realization mentioned earlier, “She Used To Be Mine” was the most impactful moment of Christine Dwyer’s (Jenna) exceptionally powerful performance.

But there were also moments I did not expect to have the impact they did. Moments that snuck up on me and left me breathless. Most notably, “A Soft Place To Land.” A song I have admittedly skipped on the album. It was beautifully harmonious and haunting. Dark but hopeful. Fundamental in establishing the relationship between Jenna, Dawn and Becky.

The female-heavy creative team is apparent, while not heavy handed, throughout. Jenna’s is a story of an abused woman finding the forte, after having a child, to refuse accepting the circumstances she finds herself in. It is a story of strength in reaction to oppression. And it is poignantly topical in the wake of the new women’s movement, where social and political discussions are leading women to find their voices and speak their truth, in many cases for the first time ever.

Waitress was the first show of ASU Gammage’s 2018-2019 season, playing October 2 -7. And it sets expectations extremely high. Thankfully, the upcoming schedule seems to recognize the high bar and is aiming to maintain the excitement by bringing us the national tours of On Your Feet, Dear Evan Hansen, Hello Dolly, Aladdin, The Play That Goes Wrong, Wicked, Rent, Charlie and the Chocolate Factory, and The Book of Mormon. Tickets for most of the shows are still available for purchase through the Gammage website.