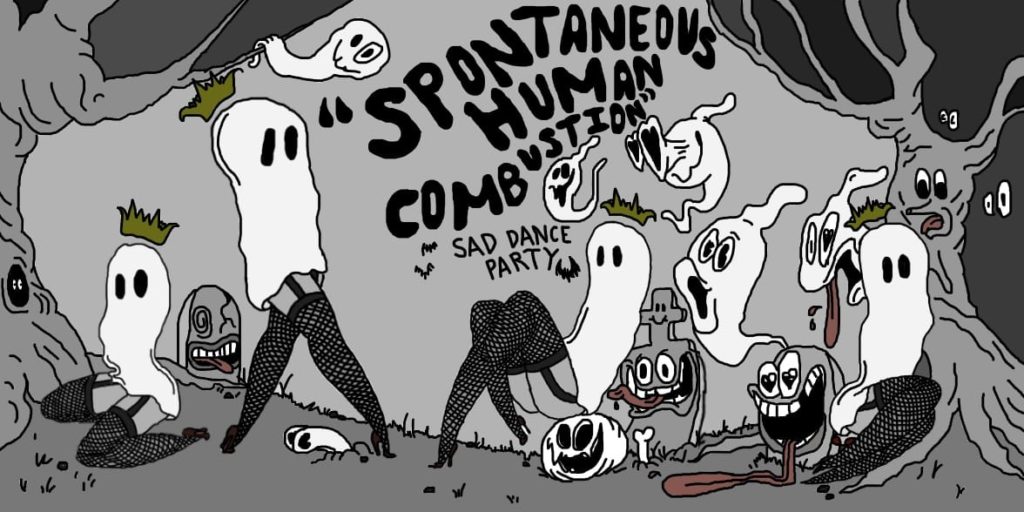 I can’t tell you what they played the first time I caught Sad Dance Party [SDP] at one of many modest house shows, but I can sure as hell recall the faltering tenor of Peter Resendiz when it rattled through an acoustic amp and straight in to the crowd. I came across the sad-punk-rock-emotional-roller-coaster-chic ensemble shortly after I encountered their 2016 debut EP on social media, thinking to myself, “Hmm.. dance, party, sadness? Sad Dance Party? I can get into this.”

What is a Sad Dance Party, you ask? Well, I could take the place of any Phoenix New Times reporter and pretend to spew random adjectives in promotion of their new album, but my connection to their music became slightly deeper in recent months since my unlikely conversational kinship began with lead singer Peter after I reviewed a few of their sets on separate occasions. While I am always open to the friendships I continually make in this industry, I am also socially weary of the distance I have to the subjects I’ve covered in the past; it is customary for me to only strike up friendship with those who approach me first after the story is finished.

This is partly due to my respect for their art and the original artist: I like to make it clear to them that my intentions are completely professional and that I am not simply hanging around to rub elbows for the sake of ego. On the other hand, it is also sometimes my own concern of overstepping my bounds in a subculture I am not entirely accustomed to: I do not identify, dress, or wax nostalgia for punk culture, and when I began attending these shows, I never pretended to be a person who didn’t wear Hawaiian shirts. Like a wildlife photographer, who am I to disturb my subjects in their natural habitat?

It was just my luck when Peter launched a series of our own private social media messages unfolding each layer of our lives to each other, with many more still looking to be to confided. In a scene littered with earthly temptations via mouth-and-nose access, my large respect for him came in the form of being the first person in years to offer me a sober space, and maybe — just maybe — a friendship which doesn’t conclude in ill-timed drug psychosis leaving those in my wake as the survivor.

When I was approached on previewing their album in full before the release, I couldn’t think of a better way to settle into my own depression more than I already have.

From the get-go, I quickly picked up on the strangely acerbic vibes SDP translated well between their studio work and live performances: much less like their pure-punk predecessors, the band — made up of William Kessler (Guitar/Vocals) Sydney Huyge (Bass/Vocals) Michael Garcia (Drums) and the aforementioned Peter Resendiz (Vocals/Guitar) —  utilizes more poetic prose and sing-song leads contrasting the usual mambo of shouted lyrics in a West Coast accent backed up by two tribal chords and all the angst in the world. While of course Peter’s lead vocals can get that raspy, folk-punk tone in concert, there seems to be the slightest hint of theatrical background which makes his natural vibrato round out any possible bum notes and make his range elastic.

With only two releases preceding this first full-length LP, it can get pleasantly jarring when comparing the recent year old debut EP with their rough production found later in February 2018’s Bedroom Demos, juxtapositioning both against this full-length professional product of an LP. If their debut EP, Bummer In The Summer, gave us an idea of who Sad Dance Party wanted to be, the Bedroom Demos reflected the changes it took to materialize the upcoming record known as Spontaneous Human Combustion; what a fun way to die.

The record begins with “Airplane,” a track I believe I had heard in the past during one of their numerous sets; although the chords may be familiar, the beginning of the album is trademarked with Resendiz’s voice producing a quickly-syncopated warble against a pop-punk foreground, delivering lyrics describing a much more mature inner pain than they’re contemporaries. “Airplane” acts as the first entry which captures this familiar mix of manic joy with depression around the corner. I identify “Airplane” as a mature callback to their first EP’s fun, punk-bop sound, paired with the life lessons I assume the writers have learned along the way.

If the tracklisting I received still represents the final product, then “Fade To Black” displays itself as an entry point into the new era of SDP. Armed with distortion up the ass and slightly metalcore-esque writing in the lead-guitar line, Peter pushes his voice much harder in the same vein he displays in a live performance. “I am getting older and way more sad” seems to be the ethos of this full-length effort. Instead of succumbing to the usual Peter Pan Syndrome creatives can face, “Fade To Black” is a call-to-arms in accepting your fate and age, while also admitting how much it can royally suck. The grittier approach to the instrumentals made me originally apprehensive, but their original bread-and-butter still comforts fans in the form of experimentation and lyrics.

As “American Spirit” begins to play, I  picture the feverish fingers scaling the neck of a nicely-finished acoustic guitar. The traditional folk-punk elements return as the band gives us a more earthy approach to chords which remind me of an Irish folk-song. What album would this be if it didn’t have at least one track artistically targeting the hypocrisy of the American Dream? As Peter once again takes us on a journey of daily life combined with abstract pain, the “American Spirit” they sing of seems impossible to capture without altering your mind through self-medication. Who can blame ‘em? There is an inherent fear when one participates in a system where they know they do not belong.

“Dead Boy Lullaby” became one of my favorite tracks with its obvious desert influence and Spaghetti-Western guitar licks belonging on the Django: Unchained motion picture soundtrack. Peter drags his voice out a little slower with more restraint and focus on the lyrics as the hook bubbles up into a pop-punk / indie pop-esque explosion filtered through multiple present guitars. Clocking in at two minutes and thirty-eight seconds, the uplifting production of the chorus only makes me yearn for this post-pop ode to all the “sadbois” looking for meaning in the present day. “Somebody Like Me” returns with that sweet Sad Dance Party original sound where the vocals also reflect a comfort zone among the melody. Unlike “Airplane,” the conventions Resendiz and the bandmates have to work through are more nuanced in emotion, portraying multiple emotions of a character beset by regret among the adventurous instrumental choices.

“Passion Tinn” passes the half-way mark and re-enters the “Fade To Black” mindset with a heavier production set. Peter began to syncopate his vocals in such a frenzy which made me wonder if he could keep up the pace and intensity in a live performance. Even with the quick-fire method of lyric-spitting, there was an intense care on behalf of the band to make the lyrics shine even in the midst of punky instrumentals and unconventional delivery; just when you think you didn’t quite hear what was sung, you’re already caught up by the next bar.

When “No Such Thing” hits my ears, the slight, pop-twangy inclusion of the acoustic guitar in the opening phrases shakes me in all the wrong, and right, ways. Seeming like a call-back to Panic At The Disco’s Pretty. Odd. album, Sad Dance Party once again utilizes melody amongst chaos; don’t worry, that is where the Panic comparison begins and ends.”Beachtown” acts as another Arizona conglomeration of sound, reminding me vaguely of their older track, “Beautiful” in some aspects, while cementing this new attitude of “desert punk” into the SDP ethos. As much as it takes on a calmer tone, the aggressive production style found earlier in the album remains present.

“Every Particle” continues the lackadaisical production trend, but soon gears up for another quick romp before the end of the album as the band describes the feeling of losing every particle of yourself to someone among the rougher, psychedelic guitar riffs, leading into the final track, “Break Me.”

If there’s any reassurance I can give to fans who have only heard the preview, their debut full-length album is a polished effort which contrasts their DIY roots, but inserts a surprising amount of maturation for their relatively short released discography. The spooky album art by local artist Inaya Flores only makes this folk-punk-desert tribute all the sweeter.

Catch Sad Dance Party when they host their album release show at The Trunk Space on October 20 and grab Spontaneous Human Combustion when it drops that same day on Bandcamp. 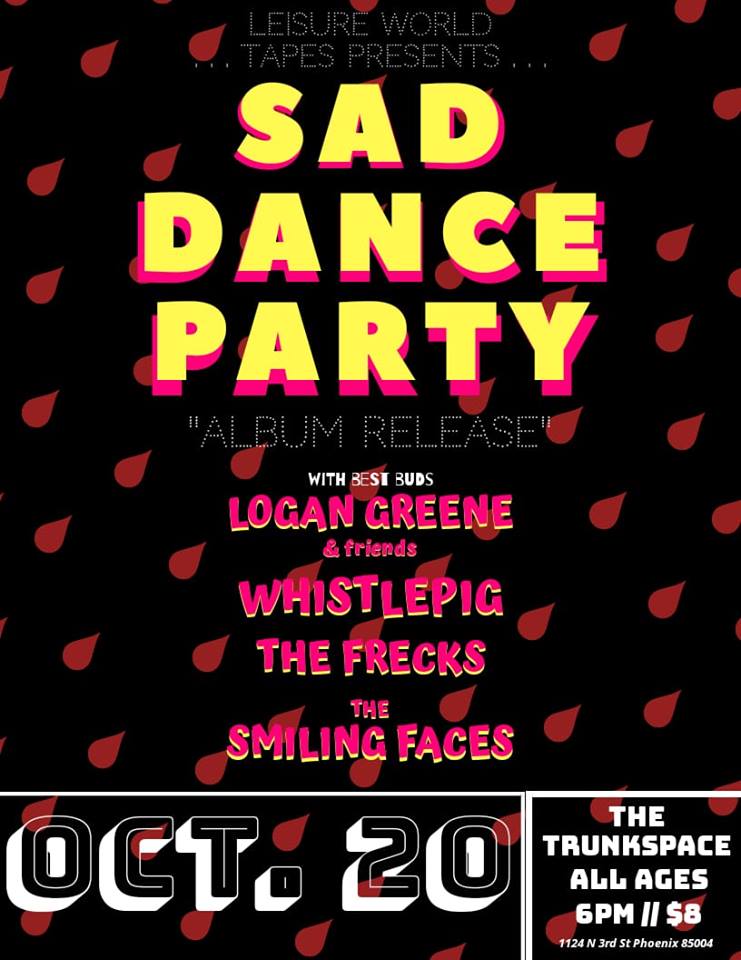