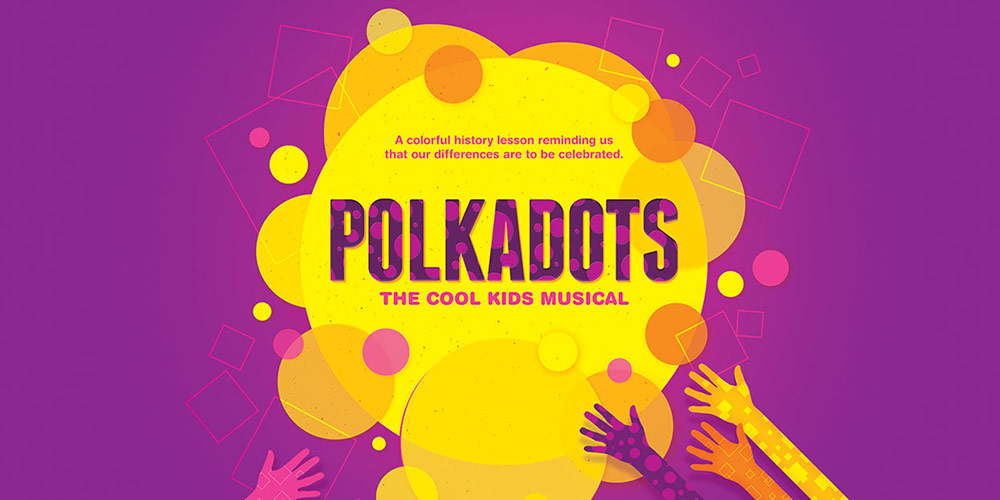 Valley Youth Theatre (VYT) began its 30th season with a huge bang, producing a beautiful spectacle with Newsies. Its second show of the season, Polkadots: The Cool Kids Musical, is much more understated. That is not to say it is without vibrancy and talent, because it is jammed full of it. But Polkadots is a different type of show. It is a show primarily aimed at providing a positive message to little ones, with overarching themes relevant to everyone. Short and sweet, with an intermission in the middle, making it consumable for even the tiniest of attention spans.

Polkadots, a work by Douglas Lyons, Melvin Tunstall III and Greg Borowsky, is inspired by Ruby Bridges and The Little Rock Nine. The bravery of the young people who bore the social brunt of racial desegregation in American schools during the Civil Rights Era.

Lily, a little girl with polkadot skin, moves to a town of squares (people with square skin). She is an outsider because she looks different than everyone else. She is bullied and even forced to drink from a different fountain than her schoolmates. But she refuses to give up on her goal of making a friend, and thus eventually does. And that friendship leads to acceptance, and the realization by everyone in the town of Rockaway that our differences make us special.

The stage is framed by three beautiful lighted layers, poignantly resembling circles within squares. The set is mostly comprised of cubes with neon squares painted on them, in addition to some bubbly roll-ons, such as the drinking fountains. And the wigs and costumes are spirited and colorful, helping shift the somewhat heavy content into a cartoonish world where it is more palpable and digestible for younger audiences.

Several of the roles are double-cast, allowing for more VYT performers to be a part of the production. The show I attended starred Kate Daley as Lily, Kiara Adams as Penelope, Dominic Cardenas as Sky, Ryley Grace Youngs as Ms. Square, and Grace Bush as Mama Square. Every single one demonstrates tremendous talent, especially in consideration that their ages range from just 14-16 years old. They have lots of fun on stage, and reflect their joy onto the audience. There is also a moment of adorable audience interaction with the kiddos who get the luxury of sitting together right in front of the stage.

Polkadots: The Cool Kids Musical runs through October 28 at the Valley Youth Theatre located at 525 North First Street in Downtown Phoenix. Tickets are $20 and are available for purchase on the VYT website. I highly recommend getting the little ones in your life over there to see this fun show and benefit from the powerful message embedded therein.