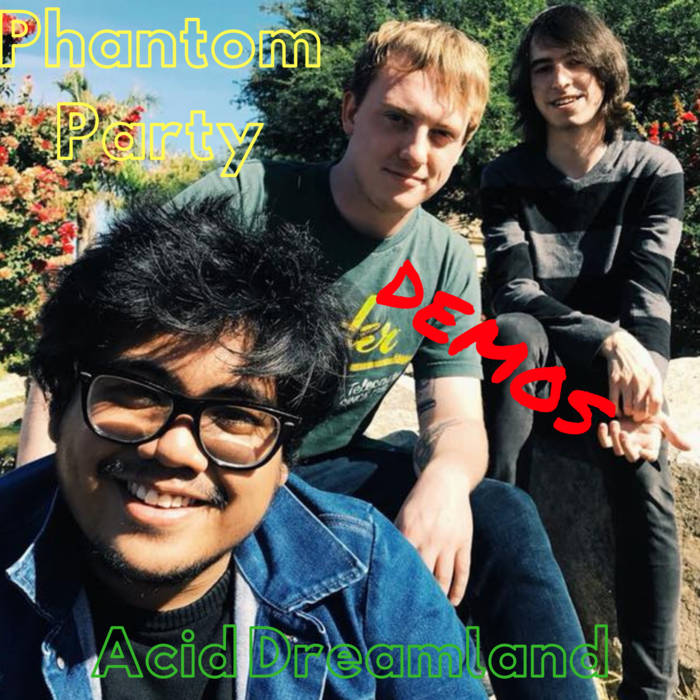 I can’t really say if any Phantom Party fan expected the surprise drop of the Acid Dreamland collection of demos when former bassist Matthew Slusser announced its arrival.

After their farewell show earlier in May, there was a feeling in the pit of my stomach, which questioned if there was any continuation of the Phantom Party saga. In relation to my own journey, the Phantom Party trio were my personal entry point into the local DIY music scene which led me to writing about other acts I cover in Phoenix today. My familiarity with Matt goes back to a Biology class in Williams Field High School, circa 2010-2011 when I was a perky, freshly-out queer sophomore male hopelessly clinging on to his own insecurities, the second year I had lived in Arizona. I remember being half-enchanted and half-petrified by the student body; I had somewhat gracefully segued into a thin young male after spending middle school rather portly, but I had yet to find comfort in that physical realm by this time.

The class was lead by a smarmy-yet-cheerful older gentleman of indiscernible age named Mr. Brock, and the casual nature of the class and my seat placement next to Matt and our mild-mannered classmate, Lindie, prepped our teenage minds with thoughts of minutia. Matt and I bonded over classic movies and music, with me owing much of my obscure and offbeat music information to him as well; we would hang out and have these long-winded informational conversations, and I’m quite sure my ego shone quite brightly back then as it does now. As much as I can owe the cultivation of my taste of culture to myself, there was some part of me that always yearned to ask from Matt what truly was cool to him at the time. To this day, Matt will always be the one person I will never feel as “cool” as.

After a few chapters where the ebbs and flows of my life took me less around his, I reconnected with him when I began to follow the Phantom Party catalog. Through a few shows mixed in with my own listenings of their 2015 debut Stellar EP, their first full-length and much-refined album Hundred Skeletons, and eventually reaching their final 2017 single  reflecting their then-new direction titled A Year In Bed, the what-if idea I mentioned above became all the more pertinent when I knew — just knew — there had to be leftover material.

Matt’s message which went along with the Acid Dreamland Demos explains it as the remnants of an 11-track concept album, going on to detail each individual track. With a purchase of the EP, a special sixth song titled “Missionary (Stay)” performed by guitarist/vocalist Josh Capati in June of 2016 intended for the Hundred Skeletons albums was also included.

The short 5-track romp begins with “Boogeyman,” a track once heard by live audiences along with “Crystal Ball” and “Selma.” As mentioned above, it was stated by the band they would move away from their surf-rock foundations and explore the unexplored: in the case of “Boogeyman,” the late 1950s/1960s vibes exuded on their debut are replaced with 1970s-inspired post-mainstream breakdowns during the chorus. Although the world of Acid Dreamland could not be fully fleshed out in these 5 demos, “Boogeyman” utilizes a 1970s funk-organ sound with a slight waltz-beat, evoking their past sound but distinctly straying away with a sexy guitar solo punctuating the mid-point. The structure of the chorus tells us this would make a great intro to a set, or a song denoting the beginning of the encore; the slightly 00s pop punk composition during the chorus encourages all to bop along.

Speaking of bop, how could I ever forget the playful performance of “Crystal Ball?” The pop-heavy writing mixed with slightly more complicated riffs on top of the sugary beat makes what seems like a song Ludo could have written flourish with the Phantom Party spin. This shift in genre to less specific styles associated with their early days complements the vocals of Josh Capati with a lush quality; I originally felt the low tones of his vocals would sometimes get washed out in their aggressive, punk / surf tracks, but these lighter compositions ranging from pop, to pop-punk, and 1970s allow his mellow tenor to take center stage.

I distinctly remember “Selma” being a crowd fan-favorite in live settings; If Phil Spector wasn’t rotting in a jail-cell, I’m sure even he could appreciate the 1970s girl/boy group inspired percussion mirroring acts like The Ronettes in “Be My Baby.” The simple 1960s/1970s-era style beat from Austin contradicts the modern melodies Matthew on bass and Josh on vocals later carrying the rhythm and vocals, but the “punctuation” points found on the bridge quickly morph the song into a pseudo-ballad by the last minute. If only the band created a demo called “Patty,” (har har, Simpsons joke), then maybe my increasingly empty life would find solace.

In the case of “Heart Shaped Jacuzzi,” I was indeed one of the lucky few who experienced this track at 51 West in Tempe, Arizona, when the track was played for the first and last time. Like the live edition, this interesting one-off romp showcases Matthew Slusser on bass more than anyone on the track. Some nice crooning and a calm, rock beat are provided by Josh and Austin, but the 1980s rock-n-roll power ballad mixed with the organ riffs mentioned above allowed Matt to showcase that catchy bass line in all its glory. I can still see Matt’s smile initiating the opening notes, carrying the track through the rest of its running time. While not certainly what I would call “closer” material, “Heart Shaped Jacuzzi” is the strange breeding process of their former 1960s instrumentals bred with their then-new direction; if Josh Capati was the Diana Ross leading the charge of Phantom Party’s vocals, “Heart Shaped Jacuzzi” posed Matt as a heady Mary Wilson, given her solo spot during the famed standard, “Can’t Keep My Eyes Off of You.” While he may not be contributing lead vocals on this track, the bassline tells me this song is 100% Matthew Slusser.

Similar to “Crystal Ball,” “Mr. Weatherman” employs another boppy-beat, but this time, reminding me vaguely of the indie pop movement which went mainstream around 2009 and unceremoniously “crashed” in 2012. While they are surely not as folk (or horrible to listen to) as Mumford and Sons, the final “official” track of the EP reminds me of a sunny day at the 2011 Austin City Limits music festival, when I was entertained by acts like Grace Potter and Haerts who would draw from the distant past in their pop melodies. If they were still performing today, I’m sure “Crystal Ball” would make a fine medley when combined with “Mr. Weatherman.”

Luckily for those who bought the EP, the fun Acid Dreamland provides doesn’t end at track five; included as a bonus track is a home demo said to have been recorded by Josh Capati in June 2016, intended for their aforementioned debut album, Hundred Skeletons. Titled “Missionary (Stay) [Capati Demo],” I couldn’t help but hear the possible inspiration from Edward Sharpe & The Magnetic Zeroes’ fan-favorite hit, “Janglin.” I could tell instantly why this was a favorite of the band’s: the sleepy tenor of Josh finds the most solace in happy, up-beat rising chords, and the simple beach-sounds incorporated during the brief guitar solo around the 1:30 mark already displays their want for transition into fresher sounds. While not quite reaching into their former surf-punk sounds, it turns out that a song originally intended for one of their first full-length releases seems more appropriate for this final farewell. The sweet sounds and lyrics presumably written by Josh do not declare a new era for Phantom Party, but instead prepare for the inevitable, subconsciously telling fans this music will always stay alive as long as its played. I truly can’t consider this a full Phantom Party effort without the presence of Matt on bass and Austin Ryan on drums, but this track exudes everything the band was about from the standpoint of sound, but shows it cannot fit in anywhere else.

I learned about proper “ends” to stories when I eventually attended a college “writing science fiction short stories” class, and learned that stories don’t always need four or five installments to tie up a neat story. Leftover questions are sometimes the spice of life with unexpected turns, and the Acid Dreamland Demos answers the obvious questions leaving enough of us to wonder, “what if?” Like my friendship with Matt, there was never a point in high school where we said to each other, “get lost.” The waves of life pulled us into different directions, with diverse people and journeys, and our stories began writing themselves into ways which weren’t conducive. Like a good single story, the state of our friendship in high school where we had the time to mess around and talk about culture, movies, and personal woes for hours will have a distinct location in my mental library, and I sincerely hope he feels the same. It does sadden me that I didn’t get to do anything special with the final interview I wanted to conduct at the final Phantom Party show at 51 West due to my own poor, impulsive decisions and technical issues, but I still have the memories of the night plastered in my brain, thankful that I was one of the lucky ones who had the chance to experience Phantom Party.