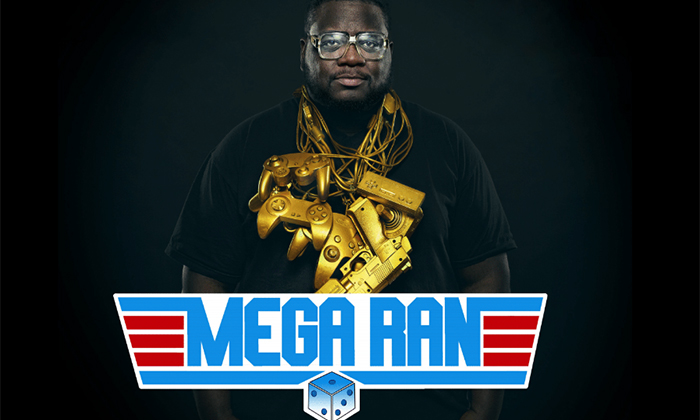 I will never forget being some flamboyant, homosexual sixteen-year-old smashed in-between fans at a Phoenix car show waiting for the first act and thinking, “if I sound a little too feminine when I cheer, will I be in danger?”

So, although I’m a fan of various hip hop subgenres, I didn’t know what to think when Mega Ran’s catalog landed on my laptop screen: could there truly be a subgenre of hip hop where nerds and counter-culture individuals feel they are safe?

Before he would take the stage at Valley Bar on October 10th with MC Lars, MC Frontalot, and Schaffer the Dark Lord, I sat down with the artist formerly known as Random to get to the center of the Mega Ran experience, and to stir up some controversial opinions on the state of video-gaming.

Logan Lowrey-Rasmussen: Can you tell us about what it was like to transition from a full-time teacher to a full-time musician? As someone who comes from a family of teachers, can you describe the experience of balancing lesson plans and a day job while developing your rap career under Random (and later Mega Ran)?

Mega Ran: It’s so tough; but honestly, I learned so much from education [which] has made me a better performer and businessman, [and] I’m so thankful for the road I’ve taken. Often times I’d bring lesson plans to a venue, or to a sports bar while [I watched] football or wrestling — then I’d write song ideas down in between [writing lesson plans]. I told myself I’d do both as long as I could do both at a high level. As soon as I felt music [pulling me away from teaching], I knew it was time.

What changed in 2011 which made you transition into music full time?

Music started working out for me, [and lead to] really cool opportunities for travel. [Transitioning to music] was tough, because I’d have to call out of work more often and miss important days in the classroom. That was when I knew I had to make a decision [to focus on music full time], so as to not cheat the children; they need consistency particularly at that age [7th Grade].

According to your discography, you have been pretty consistent with releases since 2005/06 and have been releasing regular albums, EPs, Mixtapes, etc since then. I noticed you released a 2001 debut called Archetype, which would arrive four years before your 2005 Fundamentals EP and your guest spot on “Beats & Rhymes” (on The Chancellor); Could you tell us more about this debut album, and why there was a four year gap between that release and your next?

I’ve literally never heard anyone mention [my debut album] Archetype in an interview, because no one’s heard it!

I self-pressed [one-hundred CDs] and distributed them in Philly, but outside of that, it hasn’t been heard [by many]. I was still learning who I was and what I wanted to be; that album was very positive, but also very fiery and political — a lot of the ideas I formulated on that album [became] refined for my first “official” [2006 release], The Call — I was just getting my feet wet. I spent that four year gap writing, recording and learning more about the process of musicianship; then it was off to the races.

For fans of your recent work, what separates your early work (like Archetype) from the work you perform/create today?

It’s more polished; as I said I didn’t really have a focus back then, [and] it was just freestyle bars put over beats. I listened to a lot of Redman; still do. So that [version of] Random just wanted to have fun. I still do [have fun], but I’ve realized the importance of music with substance that can stick to the ribs a little bit. I’ve also developed the confidence to be ALL of myself, which is I think what makes what we do special.

It was mentioned in your recent Phoenix New Times interview in August that the first system you ever played was the Atari 2600, which certifies you as a classic gamer. While everyone wants to know your favorite system, what do you think were the worst consoles you have ever played on?

[laughs] My friend had a VECTREX, which was a pretty terrible system way back in the day, with like, one game: an Asteroids wannabe. I hope I don’t get too much flack for this, but I was never a fan of the Nintendo 64 — that controller is an absolute monstrosity.

Do you still game? In the last ten years, what games do you think were the most culturally significant in relation to how the industry has changed? What genres do you keep yourself busy with?

I game whenever I can. I love the Nintendo Switch, it’s perfect for my traveling life, and the games are awesome. I think back to the release of Grand Theft Auto: San Andreas as one of the last culturally significant events in a game, with the focus being on inner city life on the West Coast. It opened a lot of eyes to an entirely different world that games had never explored [and] almost every game after it has been inspired somehow by it, in some way. I play sports games, RPGs, strategy and open world games most of the time; working on Spider-Man now.

While it’s been thrown around for the past decade, I am new to hearing the term, “Nerdcore;” can you tell us about your relation to the label, and what it means to you and the artists you work with?

Sure; Nerdcore was a term created by MC Frontalot, who is on this tour with us. He was looking for a term that described geeky hip-hop music, when there wasn’t one [being used]. [The subgenre] includes rap songs about life, love, technology, video games, or anything that could be framed in the context of being what someone would call “nerdy.”

I struggle with the term a bit, because it’s just hip hop at the end of the day; but I understand that people need a subgenre and a label on something to be able to properly classify it.

Can you tell us what it’s like to combine rap, a genre once considered a “man’s man” genre with overt masculinity and a lack of representation, and how it reconciles/fits with the Nerdcore subgenre?

It’s fun – we literally get to break stereotypes every day, to every audience we see. There will always be someone in a crowd who didn’t know this could be done, or didn’t think it could be “good.” It’s a great thing to be able to shake up their expectations in real time. It’s [has] to be deeper than a surface level thing – I can listen to any rapper and hear them reference Dragon Ball Z or Ninja Turtles, [but] I think what makes a Nerdcore artist different is [when they] take the time to study it, or break down an element of a character or storyline [by making] it apply to some other facet of life.

Nerd culture / fandoms are a concept which only became mainstream in the mid early-00s after Star Trek had its run and fandoms like Doctor Who, Sherlock, and even Harry Potter gained traction for the culture it created; what kind of fans would I usually find attending a “Mega Ran” show?

A long time ago, Nas said, “I rap for listeners, blunt heads, fly ladies and prisoners.”

If I were to re-do that line it’d be:

“I rap for gamers, hip-hop, heads, and anyone who’s ever felt…different.”

I feel anyone can relate, whether a WWE wrestling fan, a die-hard anime-watcher, a hardcore professional gamer, or even a kid who just likes rap songs with bars. Inclusion is a very big part of the Mega Ran approach, as it’s very important to let people know that they are welcomed, especially in today’s world.

With the changes the gaming industry has faced, how is your relationship (as a fan) to the uneasy track record Sega acquired since the failure of the Dreamcast?

You just opened up some really sore wounds. The Dreamcast is probably my favorite system of all time, [and] it was so far ahead of its time. It hurt me to see it go, and a part of me every year wishes that Sega would take another crack at it and release a new system, but it’s probably for the best. [Sega] always were a few steps behind in the console race, and their games are still good: Yakuza is fire, and a new Valkyria Chronicles release got me really excited; that’s like one of my favorite games of the last 10 years.

You experienced the hey-day of fighting games, especially through Capcom; how do you feel about the decline in quality within the fighting game genre, and the less-than-stellar titles which have resulted?

I don’t think the games are slacking off quality-wise, but there is a case of games coming out too soon — with the focus being on tournament play and not on making a complete, great game — that part gets to me. We’re in this [industry] where games can be released fifty percent complete and then the other fifty percent can be added in the weeks [or] months ahead through DLC [Downloadable Content]; it’s an ill trick where people start thinking that’s [how] games are supposed to be [released].

No, it’s not; the game was sixty dollars. You paid for a complete experience and didn’t get it.

That’s the part that gets to me. Tournaments and E-Sports have become such a big business, and I’m extremely proud of that; but I don’t want companies to lose sight of continuing to innovate and make dope games.

How hard is it to get your RANDOMONIUM (Japan Only) release? Can you tell us about your experiences with the Japanese market, and what led you to follow in Nintendo’s footsteps by creating an “alternate” release for a widely differentiated one at that?

Ha! It’s pretty tough to get your hands on it, but whenever I travel to Japan, I tend to see it in Tower Records stores there. It’s pretty much [as different as] night and day when it comes to pushing a product in Japan. As much as I know about releasing albums in the [United States], it’s very different [releasing music in Japan] and I won’t even pretend to understand it. The label I worked with out there [was River City], and [they] wanted a complete collection of songs, like a [greatest hits compilation], [in order] to familiarize the Japanese [market] to [my music]. We went through all of my albums and picked the best 16 songs — and no, they don’t call me “Rock Ran” out there or anything. [laughs]

What’s in store for Mega Ran in 2018? What releases are you currently touring with, and how does it feel to play again in Phoenix?

2018 will be the year I finish writing this book [I’m working on] and possibly even release it. I’ve been writing it for years now, and with all the great stuff that happened for me in 2018, it’d be a perfect cherry on top to have this [released].

I love playing in Phoenix; I feel like we’ve curated a really awesome group of fans who are excited to see me play, and will enjoy the live show — especially in Valley Bar, which is one of my favorite venues.

Thanks for sitting down with us; out of all your releases dating back to your debut, which do you think has affected the style and music of the 2018 edition of Mega Ran the most?

Oh that’s easy: RNDM (2015), definitely. That was the album on which I feel like I found my stride; when I realized I could be ALL of myself on a song and not have to fear anyone’s backlash.

Thanks for having me, it’s been a pleasure; great questions, talk soon! 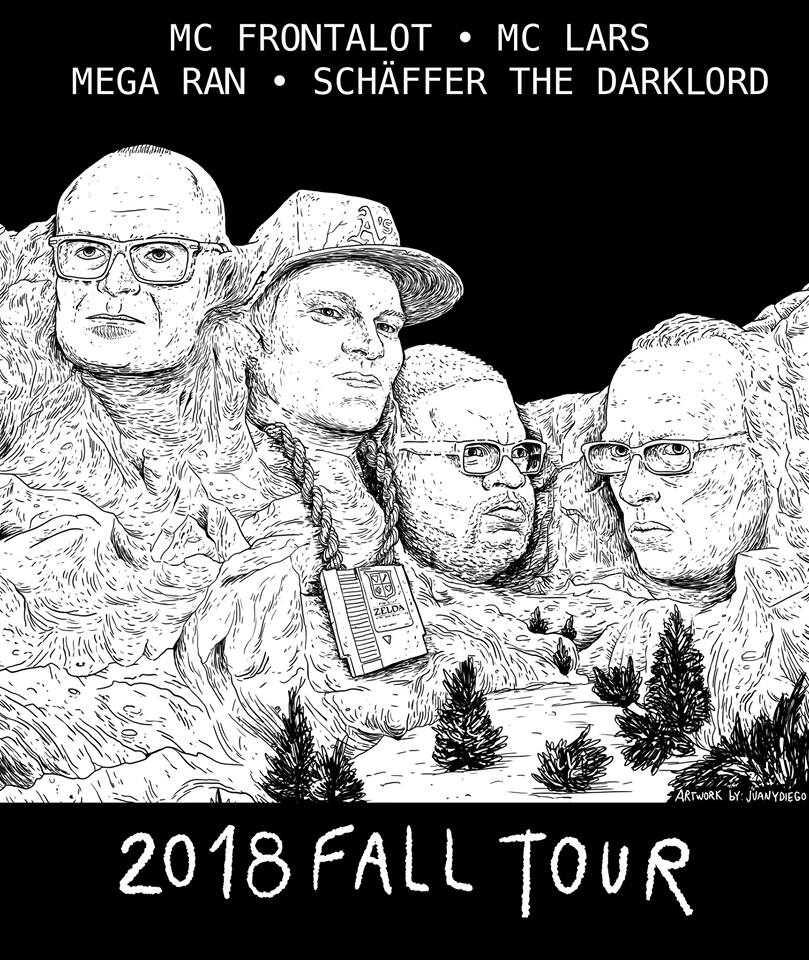