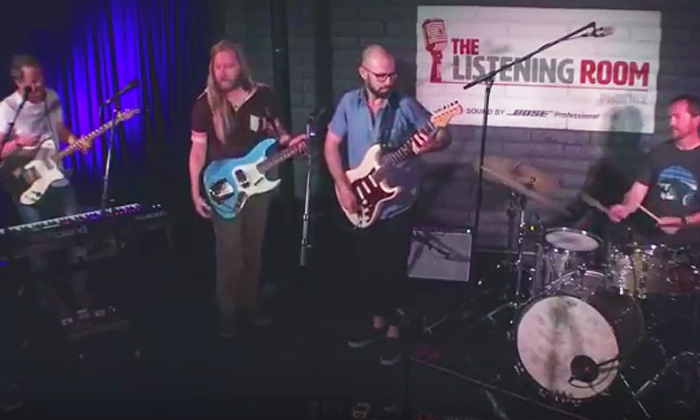 We played a song called “Home On A Hill” that I wrote in 2011 and originally recorded in Tucson in 2012 for a record that will never be released. Great record, great players, most of it tracked at Wave Labs, I just hate all of my vocals and I’m not going to go back and re-do a whole record of vocals from 2012 because it would feel like cheating. Anyway, “Home On A Hill” was long gone out of my life right up until this version of Young Mothers was about to play our first set together and we needed to add a little time to the set. We needed something easy to learn, and this is probably the most simple song I’ve ever written. Turns out the guys cottoned to it immediately, and we ended up playing it for the Listening Room session because Jess Pruitt, our bassist, loves this song like whoa, and it’s just an easy, feel-good mock-country jammer.

Songs either fall out of the sky and into my brain (which is dope and I love it) or they take a lot more effort– usually, I start by doing some stream of consciousness journaling. That’s kind of new for me, but I’ve found it’s a really great way to get the brain juices flowing and avoid judging my thoughts and ideas too harshly, which is the thing that slows me down the most. Then I put the journal away for a few hours, take it back out, reread what I wrote earlier, and go for a long walk. That’s when the kernel of the song tends to show up. The phases and themes from my journal will be swimming around my head, and one phrase will kind of stick out and I’ll very passively come up with a melody that suits it. A lot of them are trash, but once I find one that lights me up there’s no ignoring it. I usually rush home at that point, figure out the music to accompany that, then hunker down for the deliberate and hard work of actively engaging the modest skills and knowledge about songwriting that I’ve accrued in my lifetime to take the song from exciting fragment to completed song.

I freaking wish I’d keep a schedule. I like myself as a songwriter, generally, but I don’t do it nearly enough, and it’s a very slow process for me.

Lately I’ve been really inspired by the new Michael Rault record, Chaka Khan’s album What Cha’ Gonna Do For Me, and the early solo records of Donald Fagen and Walter Becker of Steely Dan.

I’m on the long and hard slog towards the next full length, and will probably continue to drop a few singles along the way. Look for it in 2021.