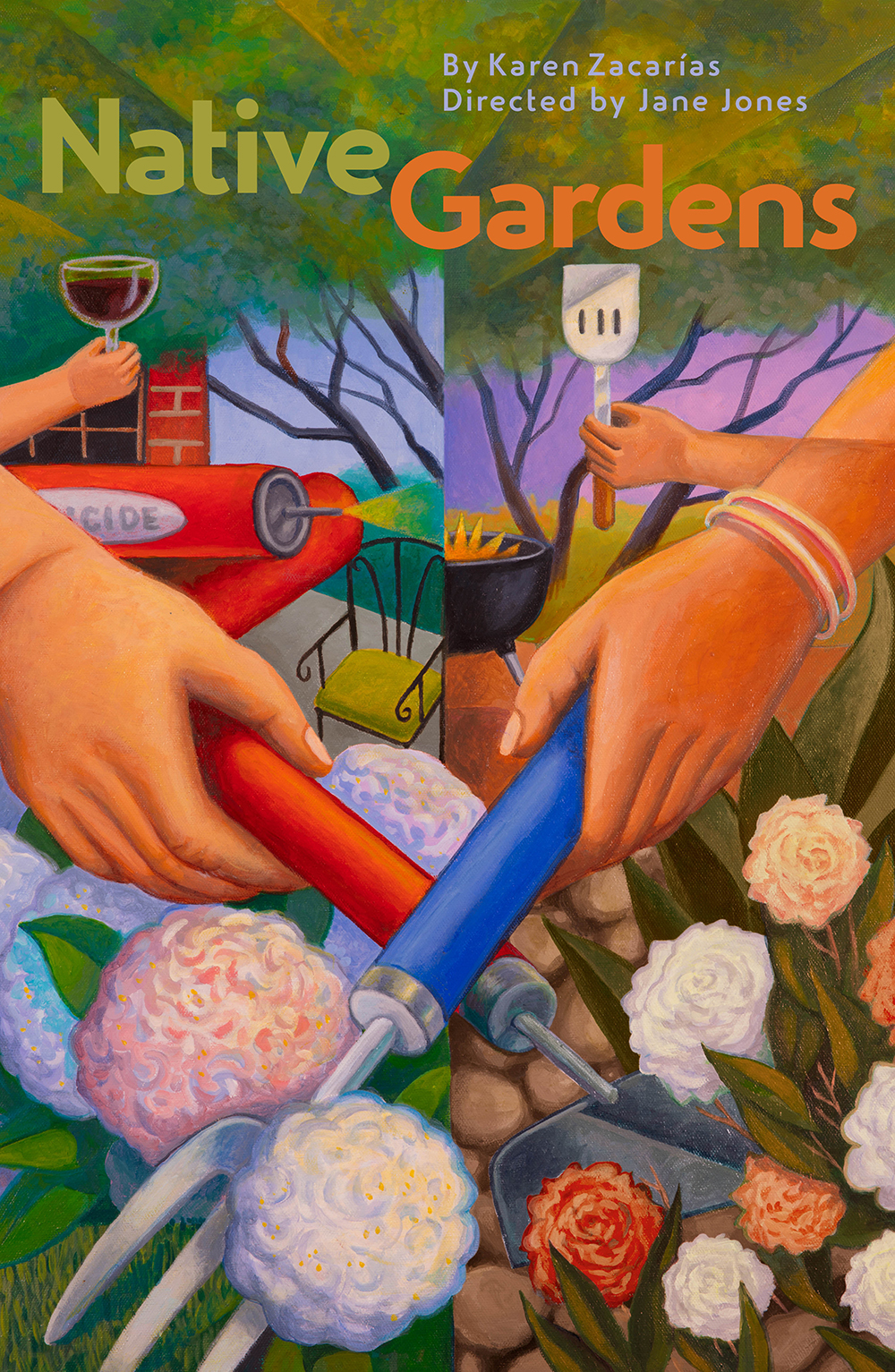 After seeing it at Herberger Theater’s Center Stage in downtown Phoenix, it it wholly evident why Arizona Theatre Company’s Artistic Director David Ivers wanted to bring Native Gardens to our state.

Although it is takes place somewhere in the D.C. suburbs, the new comedy by Karen Zacarias hits extremely close to home. A young Latino couple moves in next door and their wealthy neighbors are faced with a territorial standoff that brings to light innate perceptions. There is a physical barrier that divides, and an even stronger barrier of ideals. An “us versus them” paradigm. Sustainable climate sensitivity versus aesthetically-pleasing disruption. Immigrant versus native. Earned versus taken. Yes, even Republican versus Democrat. Although Frank “almost voted for Obama.”

The script is sharp and thoughtful, occasionally offensive. Tania’s explanation about having to be called Mexican-American, even though she is from New Mexico, strikes a chord, as does Virginia’s discussion about being the “token” employee. Gasps occasionally erupt as words are spoken that cause discomfort. Yet it is clear that these are good people. All of them. And there is a quick evolution of ideals as the characters come to know and understand one another.

Carey Wong’s set is absolutely beautiful. Two homes in stark contrast. The fixer-upper standing proudly next to the pristine white home next door. The dirty yard with a chain link fence next to the perfectly manicured, almost award-winning, flower garden. The versatile set adapts as the story does. The fence comes down, and the landscapes evolve. There is also a clever use of a motion-sensor light that delivers several laughs.

Jane Jones traveled from Seattle to direct the production, an astute choice by ATC. Her vision is clear and the production is powerful beginning to end. The blocking was highly thoughtful and realistic. Actors moved in the space with purpose, rather than moving for the sake of doing so. The early scene when Pablo tells Tania he invited his entire firm over for a party is especially brilliant in movement. So much love, established early and maintained throughout. There is also a very powerful late-night scene where the men size each other up, using verbal and nonverbal expression to throw down gauntlets, that is exceptionally well directed and performed.

The cast is spectacular. Bill Geisslinger (Frank) and Robynn Rodriguez (Virginia) have a unique chemistry. They have spent a lifetime as partners. They know each other’s weaknesses and are adept at stepping in when the other needs them most. Keith Contreras (Pablo) is strong and ambitious, with a particular soft spot for his pregnant wife and the child she will soon bring into the world. And Arlene Chico-Lugo as Tania is one of the most likable portrayals of a character I have ever experienced. She is extremely easy to adore. Radiantly intelligent, thoughtful, and loving. She is ready to give up land that is rightfully hers to preserve a relationship with her neighbors, and at all times remains emotionally aware of how actions impact others. Even at her breaking point when she curses in Spanish. The ensemble members are also spectacular, using only movement and expression to speak volumes.

Ultimately Native Gardens is about how we (humans) are all connected. That sometimes silly trivialities and misunderstandings tear us apart, and sometimes we need an unexpected human experience to remind us that we have more in common than we realize. It is an impeccable production, and a wonderful way for Arizona Theatre Company to kick off its 52nd season.

Native Gardens ran in Tucson in September and is currently playing in Phoenix Wednesdays-Sundays through October 21st. Tickets can be purchased on the Arizona Theatre Company website. For more information on the upcoming season, watch the video below with ATC’s Artistic Director David Ivers.